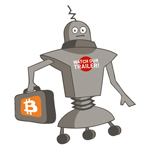 The opening festivities of the Bitfilm Festival for Digital Film will kick off in Bangalore on January 17 and mark the beginning of global online voting for the Bitfilm Awards in 3D animation, 2D animation, hybrid digital and Machinima films. The awards, decided on by a worldwide online audience, will be presented at the closing even in Hamburg, Germany in April.

For the first time since its 2000 launch, Bitfilm will use the new digital currency Bitcoin for the voting process and as prize money. Each of the 59 nominated films has its own Bitcoin account, to which film fans may transfer money anonymously and without any transfer costs. The film with the highest number of donated Bitcoins and votes per category will receive the award. The donated money will be divided among the three best-ranked films per category.

“We are very fascinated by Bitcoin. It is a new kind of money, which has the potential to revolutionise the world as much as the Internet did” says Aaron Koenig. “Bitcoin is an open source currency that needs no central bank and knows no inflation. It is also a new worldwide payment system that makes money transfers around the globe cheap and fast.”

In Bangalore, Bitfilm will present a selection of 12 nominated films which represent a huge variety of genres and styles. There will also be a talk about an Indo-German co-production by Aaron Koenig and Vijayaraj D. from Bangalore, who have been working on a number of short animated films together, including a popular one about Bitcoins:

More information can be found at www.bitfilm.com/festival.