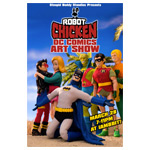 Artists from Robot Chicken and DC Entertainment (plus special guests) will display their work with all proceeds benefiting OPCC’s Turning Point, an interim housing program that tailors services to the needs of homeless individuals to rebuild their lives and end their homelessness for good.

Robot Chicken uses stop-motion animation to bring pop-culture parodies to life in a modern take on the variety/sketch show format. The Emmy-winning series began airing in February 2005 and remains among the top-rated original series on Adult Swim.

“I have seen some of the pieces and the amount of work that is going into the art is phenomenal,” says Robot Chicken production manager Laura Allen. “We have 60-plus artists who are submitting art and I know it will be a great event for a great charity. We are all very excited to be a part of this fun event.”

The staff of Robot Chicken and DC Entertainment will exhibit their work at iam8bit studios in Echo Park at 2147 W. Sunset Blvd, Los Angeles, CA 90026. The exhibit will be Friday, March 28, from 7 p.m. to 11 p.m. All proceeds from the show will benefit OPCC’s Turning Point. The exhibit will preview and celebrate the April 6 premiere of the Robot Chicken DC Comics Special II: Villains in Paradise. 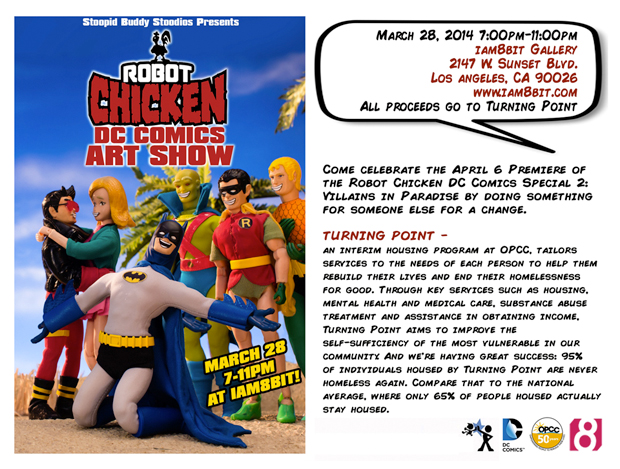