Heritage Auctions’ Animation Art Auction in Dallas on July 1-2 scored a record-breaking $1.4 million in sales, thanks to rare offerings like a fabulous selection of original pieces from the production of Disney’s Fantasia (1940). The leader of these offerings was a Kay Nielsen concept painting of the demon Chernabog from the “Night on Bald Mountain” sequence, which sold for $59,750.

“This was our sixth consecutive animation auction to top the $1 million mark,” said Jim Lentz, Director of Animation Art for Heritage. “Our formula has been to auction primarily fresh material that never had been offered for sale before, with almost no reserves, and to cross-promote it to a new generation of bidders as well as seasoned animation collectors. We plan to continue in this vein and also to continue emphasizing the whole range of animation from 1928-2000.”

A lovely Snow White and the Seven Dwarfs production cel featuring the princess and the “Old Hag” exceeded expectations with $33,460. There was also a rich collection of Lady and the Tramp artwork, highlighted by a cel setup and master background that went for $14,340; a “Belle Notte” cel setup, $11,950; and a concept art/background color key by Eyvind Earle, $6,572. Items from the controversial Song of the South also pulled big payouts, including a storyboard sequence (plus 23 pages of concept art) by Ken Anderson, $15,535; and Br’er Bear and Br’er Fox concept art by Mary Blair, $10,157.

Outside the Disney offerings, the top performers included a Robin Hood Daffy original painting by Chuck Jones, $14,340; a publicity cel and painted coconut for The Adventures of Batman from Filmation Studios, $6,572; rare Rocky and His Friends cel & key master background ($16,730); extraordinarily rare Dr. Seuss’ How the Grinch Stole Christmas cel setup & master BG (MGM, 1966), $6,572; an early depiction of Mighty Mouse as Super Mouse and a Tom and Jerry cel & painted BG from “A Mouse in the House,” which both sold for $5,019. 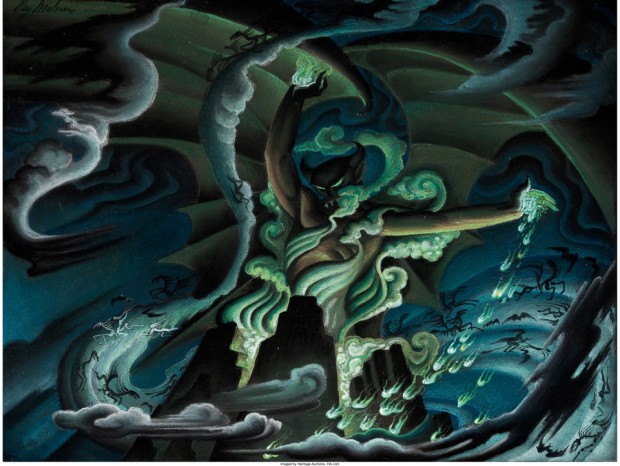