In a bit of a surprise, Disney’s Big Hero 6 took home the best animated feature Oscar last night, making it two in a row in the John Lasseter era following Frozen, and the Mouse House’s first sweep, with Patrick Osborne’s adorable Feast winning the gold for short. Meanwhile, Christopher Nolan’s Interstellar won the visual effects Oscar for the amazingly photoreal incorporation of physics.

“Whenever you’re making any kind of film, the story is really the ultimate thing that you’re trying to tackle,” Hall said. “And for this one, we had this amazing story about grief, about loss, about a 14‑year‑old who loses his brother and a robot who becomes essentially his healer, and trying to reconcile that with a superhero origin story was very difficult, and it took the bulk of our time as directors. We worked at it and we worked at it and we worked at it until we finally found that Baymax linked those two stories together. But in our 20-year history at Disney, I think this was our most challenging film. But it makes it all the sweeter when this kind of stuff happens.”

“We’ve all been at Disney, each of us, for about 20 years, and every movie is hard, but they’re hard in their own way,” said Williams. “And I think you’re getting to the heart of what was uniquely difficult about this one, which was taking all the disparate elements and bringing them together. And there are two distinct genres we were taking on: a superhero origin story, and a boy and his dog — or a boy and his robot story — and we had to tell one without making it at the expense of the other. So, yeah, I think that really the most challenging thing was pulling all these elements together.”

In addressing a question about storytelling, producer Roy Conli said that it’s about making a better world.

“I think stories change the world, and I know, for me, one of the first things I remember was a re-release of Pinocchio: it changed my life. It made me a better boy and it hopefully made me a better man.”

Osborne, who continued Disney’s technical virtuosity by taking hand-drawn and CG to the next level as a hybrid, discussed the pressures of diving into the very successful shorts program, which has now earned Oscars for Paperman as well as Feast.

“It’s a surprise to you when you get the green light — Disney’s shorts history is just massive and there’s so many good ones. So it’s an incredibly scary and daunting thing — you don’t want to be the bad one. So you’re constantly aware of that, but it’s an honor to be able to make something in the studio with so many talented people where you can play something amongst those shorts that kind of exists in Disney’s history forever. It’s really cool.”

Spawned from snapshots of his dinners that he shot for a year, Osborne joked about making them available for public consumption.

“Maybe I’ll put out the rest because you can watch all your meals in an entire year, and you can see where your dieting is not working and why you’re gaining weight.”

“Well, I think every year we always try and get closer and closer to reality, and this time we had the access to the amazing skills of Kip (Thorne), who is one of the world’s leading theoretical physicists. And he gave us the math, the physics, which describes the universe and how these extraordinary things would actually look if you were able to go and see them. So every year we get closer and closer to reality, and, as I said in my (acceptance) speech, it’s showing us the outrageous beauty of the universe.”

Bill Desowitz runs Immersed in Movies (billdesowitz.com) and is a contributor to Animation Scoop and Thompson on Hollywood at Indiewire. 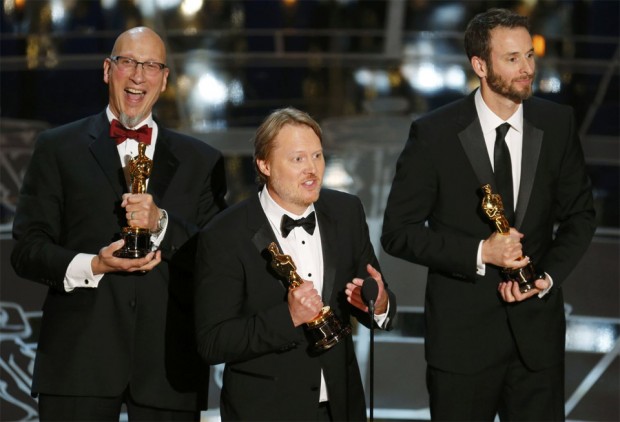