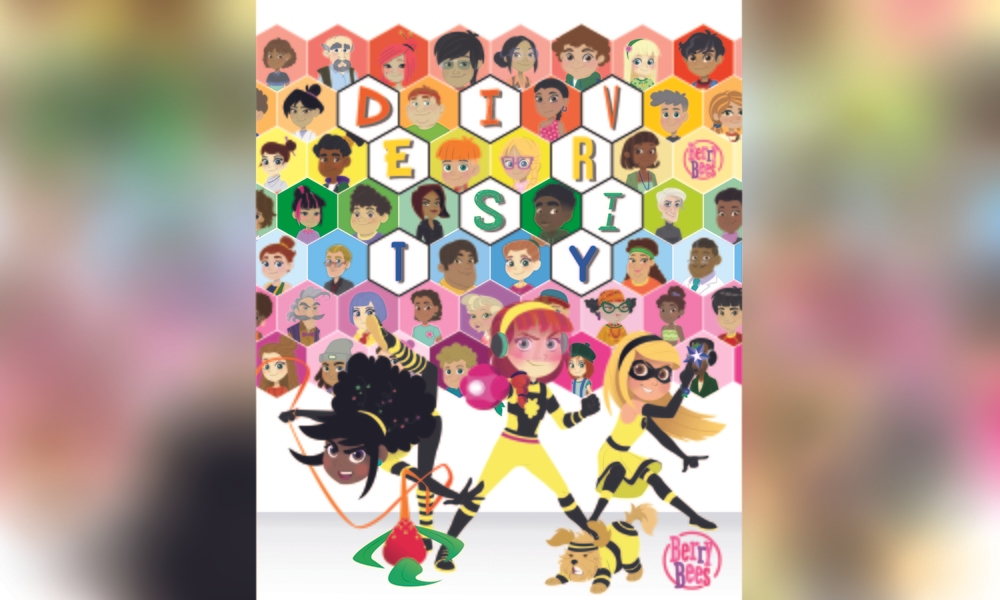 Berry Bees, the international co-production between Atlantyca, SLR Productions, Telegael and Studio Cosmos-Maya, with the participation of Rai Ragazzi and NINE Network, has garnered Italy’s prestigious Diversity Media Award 2020 for the “Best Kids Series of the Year.” The ceremony was held on Sunday, November 29, streamed live online.

Regarding the selection, the DMA organization noted: “The award is given based on votes cast by the audience (voting online) and the opinions of the Diversity commission. Berry Bees has proven to be not only the most popular kids series, but has been highly appreciated by the commission for the way it addresses issues of female empowerment and ethnicity with its three non-stereotypical main characters, making it a unique product on the Italian market.”

The Diversity Media Awards, the “Oscars of Inclusion,” recognize media content that stands out for its inclusive representation of gender and gender identity, sexual and emotional orientation, ethnicity, age, generation and disabilities. These issues are central to the animated series Berry Bees, featuring three extraordinarily talented 10-year-old girls: seemingly ordinary school-age children, they have been selected by the B.I.A. (Bee Intelligence Agency) for those special spy missions in which only child agents can be involved.

“I am particularly proud of this award. The goal we set for ourselves from the very beginning of the production was to create a series that was free of all gender stereotypes and would represent all children all over the world,” said Caterina Vacchi, Executive Producer and Head of Production & Distribution for Atlantyca. “Rai Ragazzi eagerly supported our decision from the very beginning. We worked hard with scriptwriters, directors and artists to develop real, all-round characters that would represent all cultures. A series stories-centered and where the genre of the series (spy), not the gender of the main characters, defines our target. An inclusive series in every sense of the word.”

Niccolò Sacchi, Atlantyca Executive Producer and Berry Bees director, added, “As a director working alongside our Australian, Indian and Irish co-producers has been a really interesting challenge, as well as representing the global audience and all its ethnic groups and cultures. I firmly believe that children love a good story and get attached to real characters, regardless of their gender and skin color. Children are much less conditioned by prejudices than we adults are. So, directing Berry Bees was a bit like becoming a child again, divesting myself of any conditioning and looking at the world from a purer, truer perspective. I am really proud that all the good work we put in has been given recognition with this beautiful award.”

Broadcast on Italy’s Rai Gulp, Berry Bees (52 x 12′) is a high-energy, hilarious, spy show with all the right ingredients. When the world’s top-secret villains unleash their mayhem and the Berry Bees are summoned to the rescue, when the adult spies are simply not suitable for the case, Bobby, Lola and Juliette become mistresses of disguise, secret undercover agents, astute mentalists and rad martial arts experts who also use awesome berry-themed gadgets to save the day.

Berry Bees is an international co-production between Atlantyca and SLR Productions (Australia), Telegael (Ireland) and Studio Cosmos-Maya (Singapore/India) with the participation of Rai Ragazzi and NINE Network.