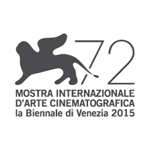 Other winners included From Afar, from first-time Venezuelan filmmaker Lorenzo Vigas, which won the Golden Lion, while the Silver Lion for best director went to Pablo Traper for his Argentine crime saga The Clan.