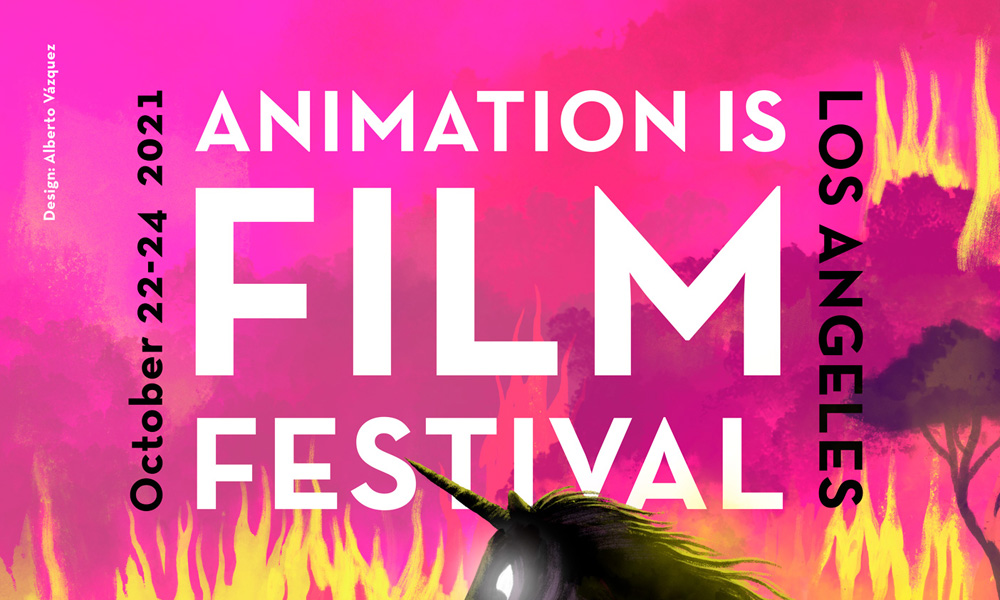 Animation Is Film (AIF) announced today the competition line-up and other special events for its fourth edition, which takes place in-person October 22-24 and returns to its home at the TCL Chinese 6 Theatres in Hollywood.

The festival kicks off Opening Night on Friday, October 22 with the North American premiere of the highly anticipated Netflix feature, The Summit Of The Gods, followed by an in-person Q&A with award-winning director Patrick Imbert (The Big Bad Fox and Other Tales). On Saturday, October 23, the Centerpiece film features the West Coast Premiere of GKIDS’ Belle, directed by Oscar nominee Mamoru Hosoda (Mirai) who will also do an in-person Q &A following the premiere. The West Coast Premiere of NEON’s award-winning Flee, directed by Jonas Poher Rasmussen, will close the festival Sunday, October 24.

“This year’s Animation Is Film lineup represents the very best feature animation from around the world, bringing to Hollywood world premieres as well as critically acclaimed, prize-winning titles from the Cannes, Annecy, Sundance, Telluride and Toronto festivals. After last year’s hiatus due to COVID, the Los Angeles animation and film communities are clamoring to gather together to see these films on the big screen, and we at AIF are enormously proud to present them,” said Matt Kaszanek, Director of AIF. 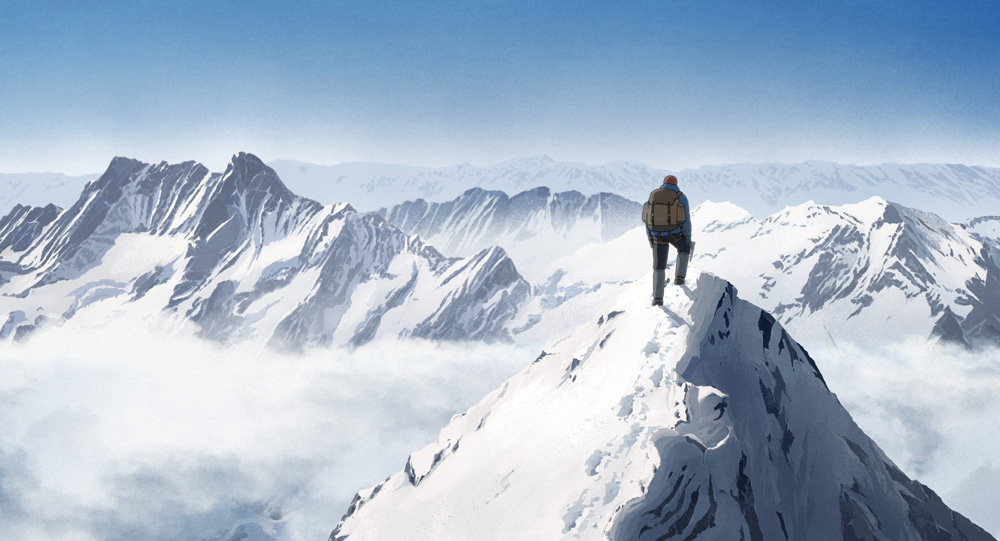 The Summit of the Gods (Netflix)

This year, AIF proudly presents 12 features in competition, 20 programs overall with shorts, and Behind-the-Scenes presentations of Disney’s upcoming Encanto presented by its director in person.

AIF will also host the North American premiere of Funimation’s My Hero Academia: World Heroes’ Mission, the third feature film in the global hit anime franchise, offering a sneak peek to fans ahead of its U.S. theatrical release in late October. The Festival is also proud to present Studio on the Big Screen, a slate of studio titles that were not able to screen in a theatrical setting upon release and will be offered to cinema-going public for the first time in Los Angeles: Pixar’s Luca, presented in-person by director Enrico Casarosa and producer Andrea Warren; and Sony Pictures and Netflix’s The Mitchells vs. the Machines, presented in-person by producers Phil Lord and Chris Miller and co-director Jeff Rowe; Disney’s Raya and the Last Dragon and Vivo, presented in person by directors Kirk DeMicco and Brandon Jeffords.

Other special sections include the popular Best of Annecy: Female Directors shorts block, presented in partnership with Annecy and Women in Animation. In addition to on-screen programming, AIF is proud to include, for the first time, a special in-lobby exhibit. Award-winning animation studio Laika will display a variety of puppets and sets in the lobby of the TCL Chinese 6 Theatres, available to all audiences, for the duration of the Animation Is Film weekend.

Said Marcel Jean, Artistic Director, Annecy International Animation Film Festival, “Animation is back in Los Angeles and that’s excellent news! As one of the festival’s co-founders, we are thrilled to support the fourth edition of Animation Is Film. This year’s lineup is exceptional by its quality and its diversity: more than ever, animation is film!”

Opening Night – Netflix’s The Summit of the Gods (France / dir. Patrick Imbert, North American premiere). Animation Is Film alumnus, Patrick Imbert (AIF ’17, The Big Bad Fox and Other Tales) returns. Seventy years after George Mallory and Andrew Irvine climbed to the top of Mt. Everest, an old Kodak camera, allegedly belonging to Mallory, winds up in the hands of an outcast climber believed missing for years. Obsessed with proving its authenticity, a Japanese reporter enters a world of obsessive mountaineers hungry for impossible conquests on a journey that leads him, step by step, toward the summit of the gods. Based on the manga by Jirô Taniguchi and Baku Yumemakura. Imbert will appear in person.

Centerpiece – Belle (Japan / dir. Mamoru Hosoda, West Coast premiere). Visionary director Mamoru Hosoda (AIF ’18, Mirai) returns to Animation Is Film. Suzu is a 17-year-old high school student living in a rural village with her father. For years, she has only been a shadow of herself. One day, she enters “U,” a virtual world of 5 billion members on the Internet. There, she is not Suzu anymore but Belle, a world-famous singer. She soon meets with a mysterious creature. Together, they embark on a journey of adventures, challenges and love, in their quest to become who they truly are. A GKIDS release. Hosoda will appear in-person.

Closing Night – Flee (Denmark / dir. Jonas Poher Rasmussen, West Coast premiere). Flee tells the story of Amin Nawabi as he grapples with a painful secret he has kept hidden for 20 years, one that threatens to derail the life he has built for himself and his soon to be husband. Recounted mostly through animation to director Jonas Poher Rasmussen, he tells for the first time the story of his extraordinary journey as a child refugee from Afghanistan. A NEON release. 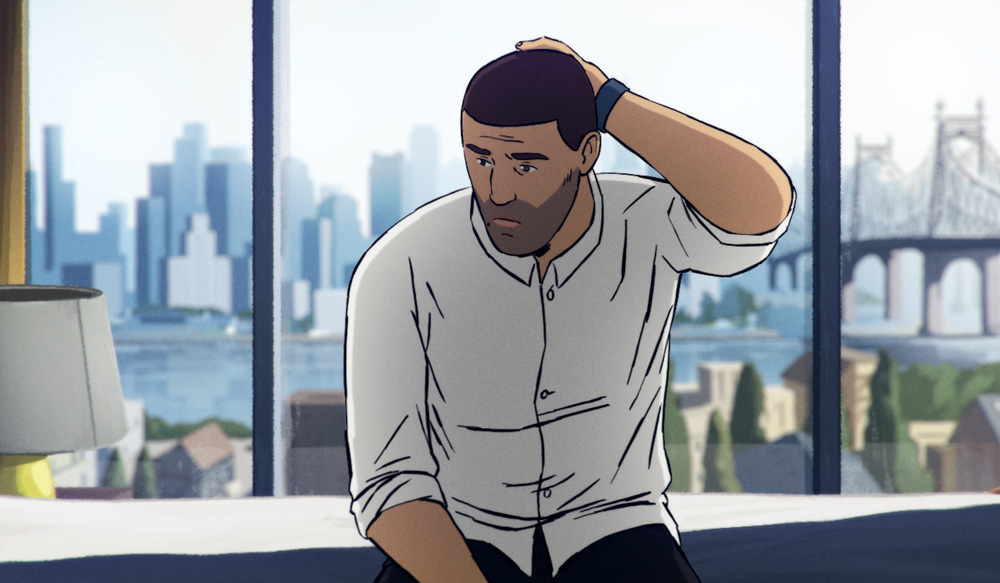 The Crossing (France / dir. Florence Miailhe, North American premiere). A small village looted in darkness; a family forced to flee. The two oldest children, Kyona and Adriel are quickly separated from their parents facing the road of exile alone. They embark on a heroic journey which takes them from childhood to adolescence in search of shelter, peace, and the hope of finding refuge and their family. These courageous siblings survive incredible challenges, before reaching a new world, free at last.

The Deer King (Japan / dir. Masashi Ando & Masayuki Miyaji, West Coast premiere). The Deer King is a sweeping fantasy epic, and the directorial debut of acclaimed animator Masashi Ando, whose work on such landmark films as Spirited Away, Paprika and Your Name helped shape the world of modern Japanese animation. A GKIDS release.

Fortune Favors Lady Nikuko (Japan / dir. Ayumu Watanabe, U.S. premiere). Ayumu Watanabe (AIF ’19, Children of the Sea) returns to Animation Is Film. The story revolves around a mother named Nikuko and her daughter, Kikuko. Both live on the same boat due to different circumstances. Daily life under this umbrella will lead them to live different types of problems and experiences that will help them grow as a family.

I Am What I Am (China / dir. Haipeng Sun, North American premiere). Formerly titled Lion Dance Boy. Young Juan is awestruck by the artistry of a traditional Chinese Lion Dance. Inspired to become an artist himself, he joins forces with a strange group of friends, and even stranger teacher (a once promising star turned fishmonger), to form the most unlikely lion dance troupe. Together, the group works to achieve the impossible.

Josep (France, Spain, Belgium / dir. Aurel, Los Angeles premiere). February 1939. Spanish republicans are fleeing Franco’s dictatorship to France. The French government-built concentration camps, confining the refugees, where they barely have access to hygiene, water and food. In one of these camps, separated by barbed wire, two men will become friends. One is a guard, the other is Josep Bartoli (Barcelona 1910 – NYC 1995), an illustrator who fights against Franco’s regime.

Nahuel and the Magic Book (Chile, Brazil / dir. German Acuña, Los Angeles premiere). Nahuel is a curious boy who has a deep fear of the sea. One day, he come across a mysterious book that seems to be the solution to his trouble. What he doesn’t know is: the book really is magical, and Kalku, an ambitious warlock, is after it.

Pompo the Cinephile (Japan / dir. Takayuki Hirao, U.S. premiere). Pompo is a talented, gutsy, and unapologetic movie producer. She works on her filmmaking day and night in the movie capital Nyallywood. Gene is tasked with directing the next script for his boss, will he succeed his first time as a director and create a “masterpiece”? He sets out to find out, with a script built around the legendary aging actor Martin Braddock (think Brando) and a young actress seeking her first big break. A GKIDS release.

Poupelle of Chimney Town – English dub (Japan / dir. Yusuke Hirota, World premiere). It is the story of young Lubicchi living among the thick smoke from the chimneys of his isolated town, yearning to see the “stars” — to know the truth — his father always told him about. One Halloween night he meets Poupelle, a man made of garbage, and together they look to the sky as their adventure begins. This feature is an Eleven Arts release. Virtual Q+A with director Yusuke Hirota and screenwriter Akihiro Nishino. 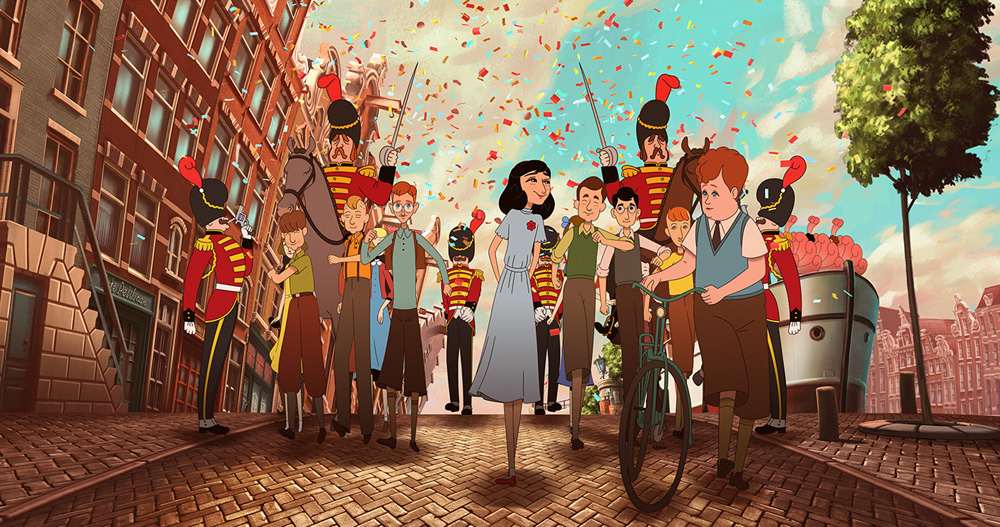 Where Is Anne Frank (Wild Bunch)

Where Is Anne Frank (France, Israel, Belgium, Netherlands / dir. Ari Folman, U.S. premiere). Oscar-nominated director Ari Folman’s latest follows the journey of Kitty, the imaginary friend to whom Anne Frank dedicated her diary. A fiery teenager, Kitty wakes up in the near future in Anne Frank’s house in Amsterdam and embarks on a journey to find Anne, who she believes is still alive, in today’s Europe. While the young girl is shocked by the modern world, she also comes across Anne’s legacy.

Encanto (dirs. Jared Bush, Byron Howard, Charise Castro Smith). Be among the first to experience exclusive, never-before-seen footage from Walt Disney Animation’s latest. As your guides, the filmmakers behind this adventure take you on a wondrous journey through the mountains of Colombia, to a magical place called Encanto. Featuring behind-the-scenes insight and footage from the upcoming film, this exclusive sneak peek will cast its spell on audiences of all ages.

My Hero Academia: World Heroes’ Mission (dir. Kenji Nagasaki, U.S. Premiere). U.A. High School students Izuku Midoriya, Shoto Todoroki, and Katsuki Bakugo face the greatest crisis in My Hero Academia history, with only two hours to save the world! During their internship with the number one Pro Hero Endeavor Agency, Deku and his new friend Rody find themselves wanted nationwide for a crime they didn’t commit. Can Deku and his friends stop Humarise’s global plans of eliminating all Quirks? Special guests TBD.

Tickets for Animation Is Film are now on sale at animationisfilm.com, where you can also find information on the festival’s 2021 COVID-19 safety protocols.