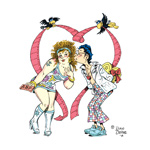 This past summer, I had the exciting opportunity to produce a rock show for Animation Block Party. It featured memorable performances from some of my favorite artists: Adam Green, Binki Shapiro and Hooray For Earth. The evening was highlighted by exclusive studio cartoons and offered a great opening-night concert experience to commemorate our tenth annual festival. With that ABP decade in mind, it’s been just about ten years since our 2005 breakthrough Valentine event at the Brooklyn Academy of Music — so we’re kind of due for a sequel.

On Feb. 13, Animation Block will be bringing choice live music and cartoon fusion to the iconic Troubadour in West Hollywood. The headline performer is electro-pop mastermind, Blackbird Blackbird, whose album Summer Heart sounds like a digitally animated tour de force. L.A. rocker Colleen Green will open the show with her brand of anthemic guitar riffs. Colleen’s music is like an espresso shot for a Photoshop slave. Put on her album Sock it to Me and you’ll wake the studio.

Yes, we are a cartoon festival. With Feb. 13 being the night before Valentine’s Day, the Troubadour will be chock-full of love-themed animation goodness. We’ll be premiering an Animation Block bumper from two-time Oscar nominee Bill Plympton. We screened his classic short The Fan and the Flower at our 2005 V-day show, so it’s super cool to have an exclusive Plympton promo for this event. Bill’s cartoons were a significant part of my MTV-loaded high-school years as his work was hand in hand with Daria Morgendorffer during the golden age of ’90s cartoons.

Twenty years later, an imaginative division of MTV called mtv (other) will be screening its misguided love testimonial series Baby at the Troubadour along with a bonus Valentine’s Card from Liquid TV. Nickelodeon Animation has two awesome cartoons in the set-list: Bug Salad, created by Carl Faruolo; plus Charlie & Mr. Two, created by Travis Braun. Los Angeles-based Six Point Harness will be broadcasting select footage from their popular web series Dick Figures and Cat Agent. To round out the evening, visual interludes will be provided by international animation challenge, Loopdeloop.

We live in an abyss of Spotify lists and, although technology is fun, live music is better. You can’t witness Blackbird Blackbird and Colleen Green on Skype, so leave the Cintiq early on Feb. 13 and come to the Troubadour. If you live on the East Coast, it’s undeniably worth ditching that polar vortex for… and if you’re already on the West Coast, please tell your friends we’re offering free Valentine’s candy with purchase of concert ticket.

Sometimes romance can be loud, like Robby Benson in Beauty and the Beast, but everybody digs a Hollywood love story, no matter how it ends.

Info and tickets at: www.troubadour.com/event/447759-animation-block-valentines-day-los-angeles. 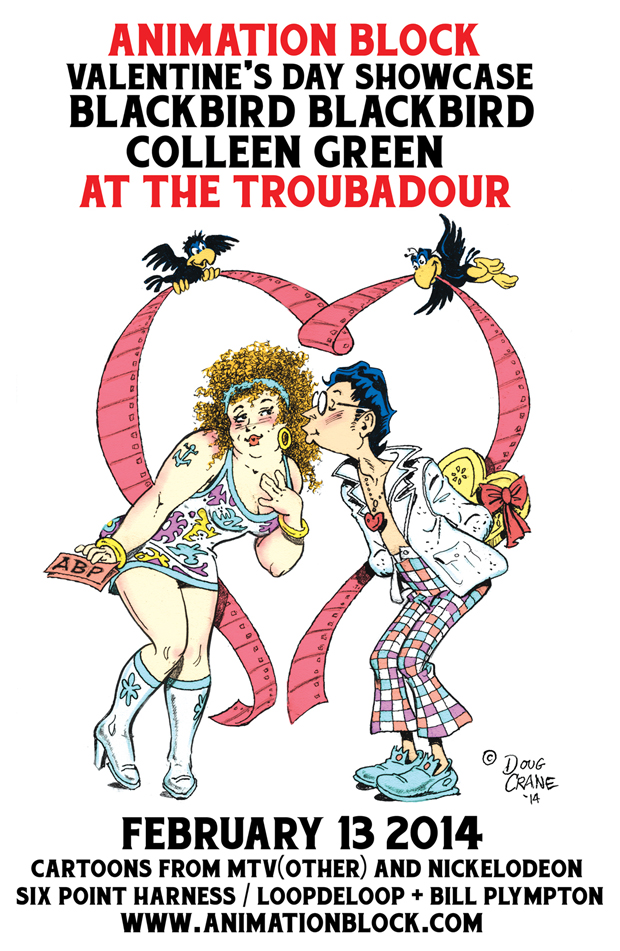