Michael Langan’s new film Choros recently premiered at the Clermont-Ferrand International Short Film Festival. He has screened a handful of his past works with ABP, including  “Intelligent Life,” which opened the 2008 festival. For info about Langan Films, please go to www.langanfilms.com. 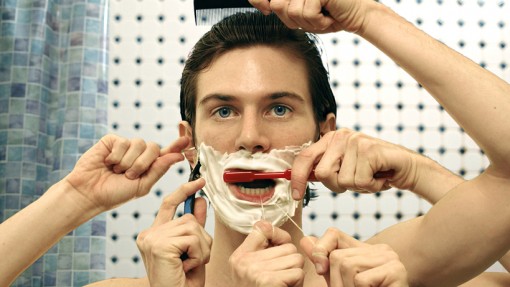 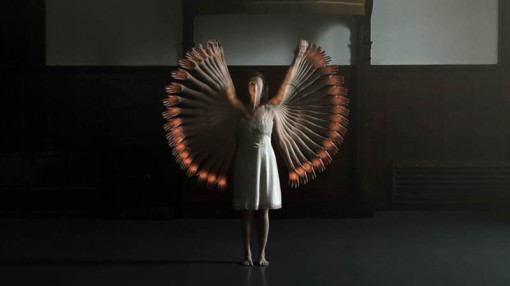 Casey Safron: Your thesis film from Rhode Island School of Design, Doxology, received a great reception at ABP in 2007—have you ever considered making a sequel to it?

Michael Langan: Yes, in fact you just now gave me the idea: It’s gonna be called Chronology (Choros+Doxology) and it’s going to be 16 minutes long and blow your mind. Look for it, Sundance 2014. Maybe the title will be better than that. In the meantime I’m finishing Butler, Woman, Man; a French period film with lots of pixilation and a gorgeous/creepy chateau location in the Loire Valley.

Casey Safron: What can you tell us about your new film, Choros — I understand it’s a collaborative effort between you and another filmmaker?

Michael Langan: Choros is a tribute to beauty, a dance film inspired by the work of the French physicist Étienne-Jules Marey and Norman McLaren, with a legendary soundtrack by Steve Reich. As McLaren brought motion to Marey’s stroboscopic photography technique from the 1880s, Choros revisits these technical innovations and attempts to contribute a few innovations of its own. The technique developed for the film introduces color, frees us from the confines of a black studio, and lets the dancer linger in one position without risk of overexposure. The resulting image obtains a degree of subtlety previously prohibited by technical limitations. We’ve also done some wild things by dressing me up in a black bodysuit and waving a flashlight around the set. The film is co-directed by the hyper-talented Terah Maher, who also appears as the dancer.

Casey Safron: All your films have different, very visual premises, is there consistent software that you use to create your work, Photoshop or Maya, Final Cut Pro etc?

Michael Langan: I pretty well live inside After Effects during a film, though I’m not doing anything too complicated. It’s just carving stuff up with masks and changing the position of and stabilizing elements. Somehow that adds up to months of work. My films don’t really look like much until they’ve had a lot of love in post; often, that’s where many of my ideas are born.

Allison Craig created the film Barko with Titmouse, Inc where she currently works as an animator. Barko has screened at numerous festivals, including Red Stick, Austin Film Festival, Palm Springs Shortfest and ABP 2011. You can checkout Allison’s work at www.allisoncraig.com. 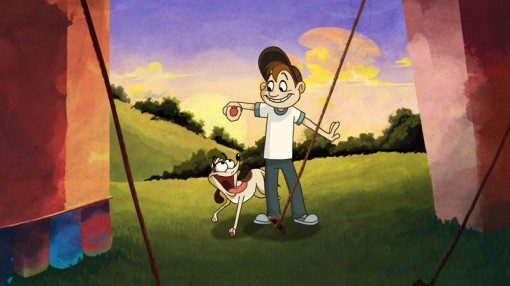 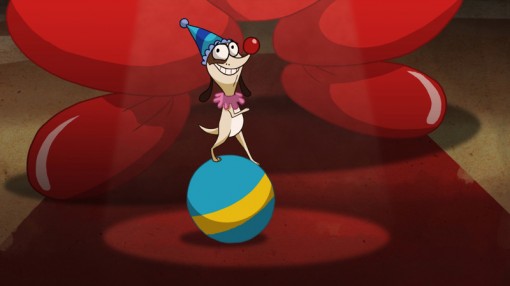 Casey Safron: Barko chronicles the dejected spirit of a circus dog, where did this idea stem from – did you go to a lot of Barnum & Bailey shows as a kid?

Allison Craig: Ok, so the truth comes out here… I don’t remember ever actually going to the circus. And another truth! I can’t stand hot dogs (which is another major theme of the short for those who haven’t seen). They tell you to write from your life, but I suppose I’ve done the opposite in those cases! That said, I do love dogs and drawing animals. I have a slight obsession with pictures of animals doing people things or wearing hats, so it was natural for me to put a hat on Barko and give him some human characteristics. As for circus reference, I did buy a DVD set of old circus stuff and referenced some dog trick segments, along with watching Dumbo again a few times (but skipping the sad parts). The idea, however, spawned from an old sketchbook doodle of a circus dog on a ball. I started with the character design and went from there.

Casey Safron: How did Titmouse work with you throughout the filmmaking process, were there specific approval deadlines or was the production schedule somewhat loose?

Allison Craig: Titmouse was fantastic to work with throughout the process! I owe the opportunity to Chris and Shannon Prynoski who own the studio. Every year or so, they invite one or two employees to create their own personal short films over the course of about a year [see www.titmouseshorts.com]. They gave me a lot of help from other employees and interns at the studio during bits of down time between projects as well as access to a sound effects library and recording booth. The approval process was pretty open ended since they were completely happy to have me do my own thing and make creative decisions. We’d meet up every month or two to go over progress and talk about any changes or developments in ideas. Sometimes other directors, animators, etc. at the studio would sit in on those meetings too and I’d get a lot of great critiques that way. So all in all, it was about a year and a half of downtime/nights and weekends to finish it up with a lot of help from all the people you see in the credits. Couldn’t have done it without them!

Casey Safron: Are you working on any new personal cartoons at the moment?

Allison Craig: I definitely have an idea or two in my pocket! So far, it’s only in the sketchy design phase, but I have blocked out a super rough outline for it.

And yes, more dogs are involved. (But no hot dogs).

Steve Stark has broadcast a number of his films at the Animation Block Party film fest, dating back to his classic Peanut Butter Fish Pockets in 2007. He currently has a monthly animation series called SModimations with Kevin Smith and Scott Mosier. His cartoon website is www.starktoons.com. 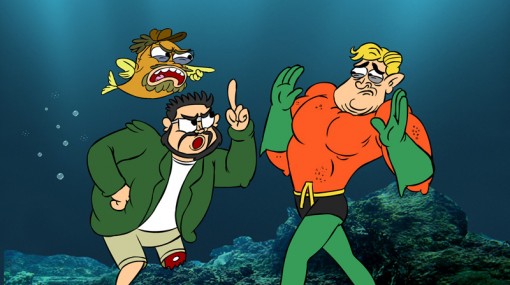 Casey Safron: Hey Steve – thanks for taking the time to talk – 99% of your films have “gross-out” humor undertones, what is it that attracts you to that particular genre?

Steve Stark: I’m all about keeping it gross! I grew up watching Ren & Stimpy and Beavis and Butt-head. Those influences definitely have to play a part. Even when I worked at studios it was always fun to take their polished characters and draw them after they’ve drank 40 beers and eaten 20 rotten hot dogs. It would take the edge off of working on cutesy shows where everybody had to wear a seat belt.

Casey Safron: You’ve been working with Kevin Smith and Scott Mosier at SModimations [www.youtube.com/user/SModimations] for a few years now, how did that come together – did they see Starktoons on the web and contact you?

Steve Stark: It all came together when I decided to animate a bit from SModcast that really made me laugh. It was an episode called “The Great One.” A hilarious story Kevin and Scott make up. It’s about a guy burying a pair of crotch-less hooker panties in center ice at the Olympics for good luck. That old chestnut. They saw the cartoon after I put it up on YouTube. I got a shout out on SModcast about it and they said I should make more. I made another cartoon based off of the amazing “Aquatic Justice” episode, where Kevin and Smosier fish berate Aquaman and ask him to get high. I got contacted on Twitter and was offered to keep making them for money. It was the greatest day ever. The first season of SModimations is on DVD and Netflix (USA) right now.  I’ll be starting season three of SModimations (now the SModco Cartoon show) soon. I’m very excited.

Casey Safron: Recently you’ve been parodying Hollywood movies such as Gremlins and the world of Narnia, any plans to spoof any of this summer’s big blockbusters?

Steve Stark: Those were fun! That would be all up to Kevin, Scott and all the members of the SModco podcast family. They are the creative geniuses that come up with all the hilarious stuff. I’ve got an insanely lucky job where I can pick my favorite episodes and draw them. I’m also working on “Jay & Silent Bob’s Super Groovy Cartoon Movie.” I can’t reveal much, but it has tons of laughs and blockbuster spoofs.