Animation Block Party (www.animationblock.com) is the premier animation festival of the East Coast. In this interview series, the founder of ABP, Casey Safron will be introducing Animation Magazine readers to some of the award-winning animators who have screened at past ABP festivals.

Ting Tey created the film Bridge as her thesis at Academy of Art University. The film has gone on to screen at multiple festivals, including Siggraph and Klik! Amsterdam. Bridge won best Animation for Kids short at ABP 2011. Please check out Ting’s work at www.tingtey.com. 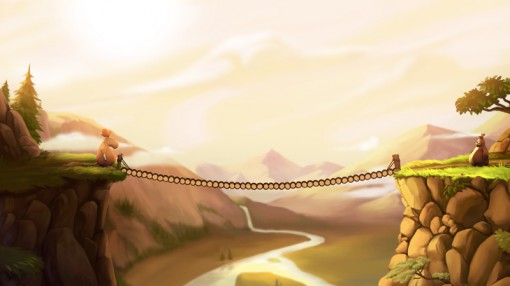 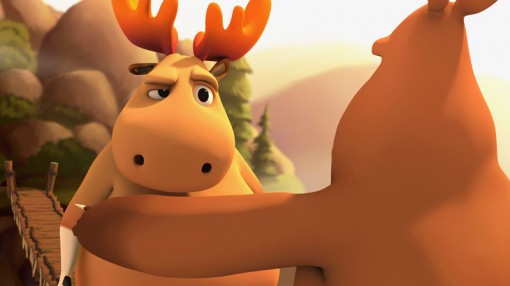 Casey Safron: Thank you for joining us, Ting. Bridge has been a favorite on the festival circuit—where did the idea for this short about animals crossing paths in life come from?

Ting Tey: I am very happy to hear about Bridge being a favorite on the festival circuit! That means a lot. The idea for this short came about when I was riding home on a bus, and the bus crossed a bridge in San Francisco. I began thinking about what would happen if there were cars coming in our direction, despite the traffic laws, and about the conflict that would ensue as vehicles from both directions faced off. I realized that putting this idea in the setting of a simple hanging bridge would be really funny! Instead of vehicles, I started with two stubborn characters on the bridge trying to get past each other.

Casey Safron: You used multiple software packages to create Bridge, ranging from Autodesk Maya to Adobe Flash; what was your process like in working with such a wide range of computer programs?

Ting Tey: Most of the pre-production work was handled in Adobe Photoshop, while the animatic was created using Adobe Flash due to its efficiency in letting me watch everything happen in real time. I then modeled and rigged the characters in Autodesk Maya, which is also where the character animation and actual staging of the action all happened. I used both Corel Painter and Adobe Photoshop for the background painting. Finally, I used Adobe After Effects to put my film together, and Adobe Premiere for sound editing and compiling the entire film.

Casey Safron: Your film has over 500,000 views alone on Vimeo, do you think it’s essential as a filmmaker to release your content on the Internet?

Ting Tey: I think it is. With the number of people who watch content on the Internet always growing, it’s difficult to get a film out there without at some point having it available online. Also, Bridge was created for the purpose of helping me land a job.

I didn’t release my film online until one year after its completion, keeping it to the festival circuit before that time. At the end of the day, the value of the Internet does depend on the filmmaker’s intentions in creating the film.

Casey Safron: Do you have any new films in the works, collaborations or otherwise?

Ting Tey: I actually do! Although I am not in a hurry to complete anything at this point, and am taking it slow, I have had many story ideas. I prefer to create some ideas as comics instead of as films due to the heavy workload a 3D animation brings.

Dave Schlafman first screened his work at Animation Block Party in 2005 and subsequently has created bumpers for ABP and also participated as a festival jury member. He is currently the creative director of CloudKid Studios in Boston. His personal website is www.schlafman.com. 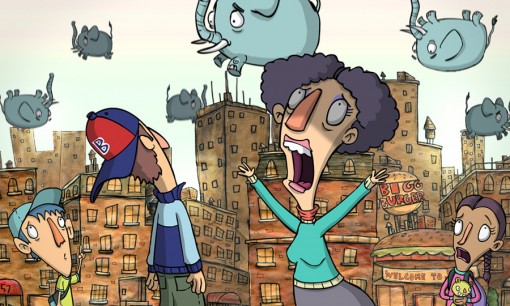 The Sky is Falling

Casey Safron: You’ve animated a number of films that have appeared at past ABP festivals, do you have a personal favorite of your independent works from the early-mid 2000s?

Dave Schlafman: That’s a hard question. I had a lot of fun producing the Philippe and Pierre shorts, but my favorite has to be The Sky is Falling, which I produced and directed for ABP. While the short is a PSA, there was something fun about taking a boring stat and making it come to life in an interesting way. It’s also pretty cool that that Al Gore showed it off at the TED conference during his global warming talk. That couldn’t have happened without ABP.

Casey Safron: You co-created the series Fizzy’s Lunch Lab for PBS KIDS GO!; how did that opportunity come about—did you design a traditional pitch package or was it based off your previous illustration work?

Dave Schlafman: Evan Sussman and I worked together at Soup 2 Nuts in Boston. We worked well together, so we decided to develop a show together. That was in 2007 and the result was Fizzy’s Lunch Lab. At first, it lived as a paper pitch and WGBH Boston offered us a development deal. We spent almost a year in negotiations, but at some point, we realized the property could possibly sit on the shelf for a while.

That’s when we decided to pass and fund/produce an animated pilot ourselves. We finished the pilot in the fall of 2008 and sent it out to a handful of places, including PBS. I had directed a series of original shorts for Between the Lions, so Linda Simensky and Paul Siefken [at PBS] knew of my work through that project. They were looking for web series and it happened to land on their desks at just the right time. We were very lucky. The web series launched in November of 2009 and three seasons later, we’re still going strong as one of the top websites on PBS Kids. It’s really been a dream project.

Casey Safron: In 2009, you and Matt Moore founded an animation studio called CloudKid (www.cloudkid.com)—what was the learning curve like in making the shift to run a business with more employees than just Dave?

Dave Schlafman: Before CloudKid, I ran a satellite animation studio out of my apartment in Boston, so that helped a lot. It taught me how to make budgets, schedules, and work with freelance artists all around the country. So, when we started CloudKid, I had the basic project management stuff down. All the other odds and ends—like marketing, managing in-house artists, building tech infrastructure, buying computers—happened gradually. Having a business partner helped and we definitely took our time and started slow; I think that’s the key. It’s kind of like a 24/7 job because there’s always something that could get done and more often than not, you’re the catalyst to make it happen. Unfortunately, drawing and my creative time fall by the wayside because running the business sometimes takes precedence. That’s the biggest change.

Casey Safron: What’s next on tap for CloudKid, any new series in the queue?

Dave Schlafman: Most of the work we’re doing these days lies somewhere in between animation and gaming. We’re working with Scholastic Education on a pretty awesome software project that we developed with them. It has a ton of character animation and character development, but it’s not a traditional “series” per se. So, while I miss producing specifically animated shorts, I have a new love of creating character-driven games with lots of animation. CloudKid is hoping to bring TV sensibilities to interactive games. In fact, we’re getting ready to launch our first original iPad app, Negative Nimbus, later this summer. We’ve been working on it for the last six months, in-between our paying gigs. We’re getting ready to tease an animated trailer and website (with some goodies) in the next couple weeks. Stay tuned—we’re all VERY excited about it. 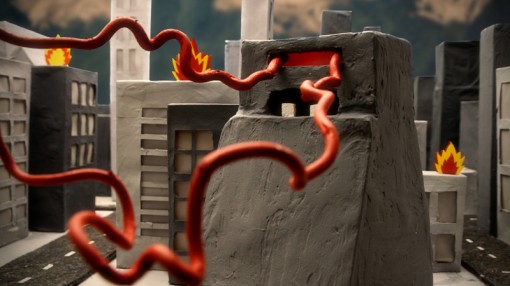 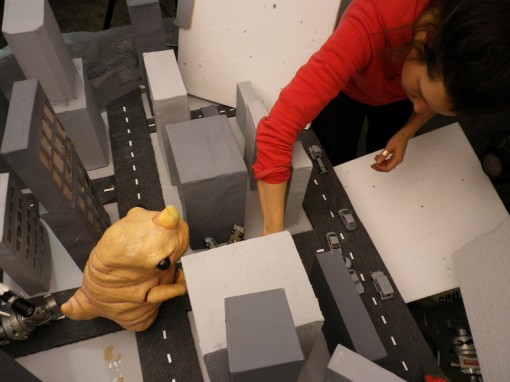 Casey Safron: Hi Marieke, thank you for taking the time to chat. Your music video Reloaded features a style of monster that was popularized by the 1950s Harryhausen and Godzilla genre films—do you have a favorite monster movie from that era that influenced your animation?

Marieke Verbiesen: I definitely have a few favorites, but Reloaded was pretty much based on the monster movie genre as a whole that arose in the 1950s era. For the character design of the monsters in Reloaded I started by researching the Nordic library of extinct animals. This is a huge collection of frozen animals, one of each kind that went extinct during the past few centuries. The animated creatures in Reloaded were modeled on sketches of these animals; it’s strange to think that they actually existed so many years ago.

Casey Safron: Your installation Moviestar highlighted green-screened creatures that come to life once a visitor enters the art space, were there any creative restrictions you faced due to the interactive nature of this project?

Marieke Verbiesen: Moviestar is an interactive installation that uses classic film, animation, animatronic creatures and surround sound in a spacious, installation setting. Visitors activate and control the installation by moving in front of a green-screen, where they can see themselves projected in a surreal jungle where crazy things are happening. Sound, animations and the robot-animatronics in the space respond to the visitors’ movements, along with live recordings of the visitors, are together creating a real-time movie. By centralizing the visitors and transforming them into actors, there is very fun, unpredictable part in the installation. This has been the biggest challenge: to see what the physical response is from visitors and let both the animations and the rest of the environment respond that.

Casey Safron: You continued with a trend of interactivity in the design of your most recent work Pole Position, a car race game controlled by a gamepad … what did you learn from Moviestar that you applied to the design of this user based animation experience?

Marieke Verbiesen: A lot of what I experienced when creating Moviestar was useful. Pole Position blends a real-life recorded environment from the perspective of a robot-controlled car, with a game that users control with a joystick. As a user, you play the game and control the car, score points when you hit or avoid certain objects. The largest similarity between Pole Position and Moviestar is that both installations blend physical, real time recorded environments with digital animations that interact together when users control them. Pole Position is based on the classic 1982 arcade race game of the same name, one of the first ones that used full color, and paid a lot of attention to the surroundings of the race environment, aimed by its creators to make it “movie-like.” Because Pole Position is a real working game that users control, there is a challenge to play with it and keep on playing with it. There is something within us humans that simply wants to improve our score and test a machine’s boundaries.

Casey Safron: Do you have any new alien cartoons in the works, or are you focused on installation pieces?

Marieke Verbiesen: Both! Right now I have a new installation in the works that uses human interaction connected to time-lapse animation. I enjoy working in several disciplines; trying to unite animation, interaction, sound and physical objects or spaces. During the last few years I got more and more interested in making large, life-size interactive installations, moving more and more away from the screen.