I’ve been fortunate to have a strong team in support of Animation Block Party. My West Coast compadre, Jonathan Mazer, helped manage early events, even traveling to Austin to emcee a show at the Alamo Drafthouse. Jonathan “Swifty” Lang, my college roommate, hosted the first ABP at his Brooklyn coffee shop. Scott Dodson, who I met at the Ink Tank, video archived the first few festivals – and in 2008 was hit by a taxi just before ABP, but still made a cool promo despite a broken arm. My high-school friend Richard Weintraub has done his fair share of ABP transport, which lessened once he had kids and was picked up by my buddy, Josh Roth. Being a New Yorker, friends with cars are essential. But both Richard and Josh are smart listeners with keen business skills, which makes sitting shotgun all the more useful.

Glenn Eaton, as true a Brooklynite as I’ve known, designed the first ABP website. Tim Caraballo has been the ABP webmaster for the past six years and counting. Chris Russomanno oversees a myriad of festival sound mixes. Frank Martinez, Suzana Carlos and Pete Sayer have been there for legal advice and assistance. “Animation Block” is a registered trademark, and sometimes you need to keep an eye on entities aiming borrow your brand. In 2006, my girlfriend at the time had a talented roommate named Margarita Sophia Cortes who worked in publicity. Margarita has handled our PR ever since. That same ex introduced me to a gifted photographer named Jazzmine Beaulieu, who has snapped every ABP image since 2007. If you look at the surplus of albums on ABP’s Facebook page, you’ll see four familiar faces popping up often: Anneli Strassler, Dane Smith, Courtney Pure and Erick Bernard – this not only because they’re good looking people, but also because they’re vital staff members. Anneli has assisted with fest operations for years and is always on point at the filmmaker check-in table. Dane, Courtney and Erick formed a crucial street team in 2009 and now help ABP events run smoothly.

In the spring of 2001, I responded to a job posting for a position at the School of Visual Arts and ended up managing the BFA Animation Department for a decade.

There are infinite students and faculty that were helpful to ABP in the start-up years, but I think it’s important to highlight a few key co-workers from that era. From 2004 to 2006-ish, my SVA office-mates Paul and Elise were always ready to lend a hand. In the mid-late 2000s, Lisa LaBracio was an invaluable second set of eyes on films I couldn’t decide whether to program or not. Jillann Hertel recommended Habana Outpost for an after-party venue in 2008, and they’ve been partners ever since. Mark Minnig has been key for tech support since the invention of Apple ProRes. Of the SVA professors: Doug Crane illustrated half a dozen ABP posters and is a consummate source for industry advice. Howard Beckerman has given essential animation counsel (and co-starred in a documentary with me once). Martin Abrahams was as loud a voice as any in support of ABP. I’ve been gone from SVA for a few years, but every so often I can still hear Marty in the hallway, encouraging students to go to Animation Block Party. There are too many others to thank, but hopefully you guys all know who you are – I’m on a word count. 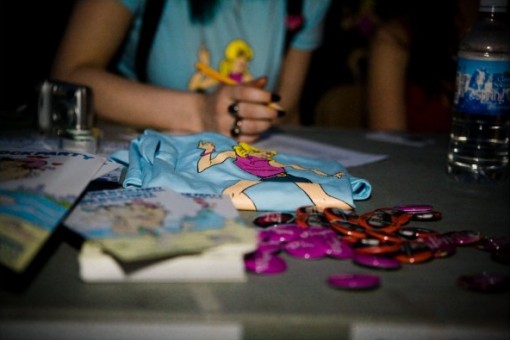