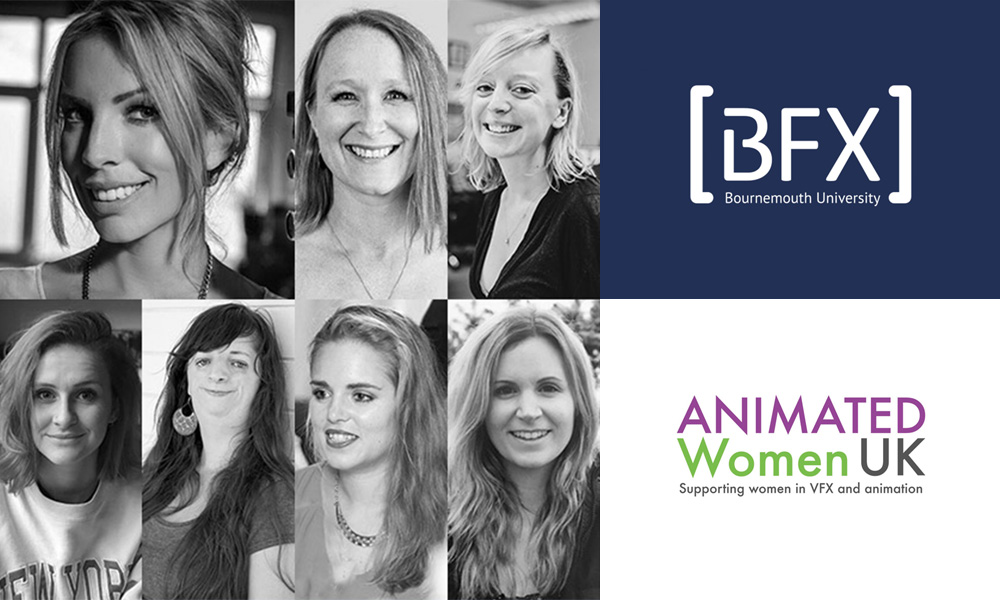 Animated Women UK headed to Bournemouth University this week to present a powerhouse panel at BFX Festival (Oct. 3-7) — the U.K.’s largest VFX, computer games and animation festival. The panel, “Keyframes for Success with Animated Women UK,” offered tips to attendees on navigating the choppy waters of the animation and VFX biz and demonstrate good practices for gender parity, through personal experiences shared by women leaders of the national industry.

When asked what had changed in the industry during their time in it, Deneuve stated that there are already more female role models to look up to, and through the Helen North Programme run by Animated Women UK, she has met with many women who inspire here. Hurcombe noted that companies are seeing the importance of female voices and are taking the opportunity to celebrate them. Llewellyn observed that thanks to there being more non-gender-specific activities for young people to be creative and an encouragement of creative activities, there is less inequality for those coming into the industry now. Salmon noticed that there was a great spirit at female-focused events of supporting each other and celebrating each other’s’ achievements. And McKay noted that seeing women in a range of different roles at Disney, including management ones, has been very inspiring for her.

Question: What Has Been Your Biggest Challenge?

Not having a clear direction following education was a common issue for Elder, Salmon and Deneuve. Deneuve highlighted her difficulty in getting companies to see her in person, rather than discussing over email. So, she stayed with a friend in Paris for a week, and told companies that she was there for just a few days and asked whether she could meet them – this got their attention, and resulted in actual meetings.

Llewellyn’s biggest challenge was getting into the industry when there were no media degrees available. She knew that she loved stories, and wanted fiercely to move into that kind of space. To solve this problem, Llewellyn pursued a number of internships for different companies, proving her passion and interest to them.

Hicks touched upon imposter syndrome, the feeling that you’re not as good as other people are at work, which two-thirds of women suffer from in the U.K. (Forbes, 2018). Hicks said she felt as though someone would “find her out,” but knowing that she deserved her place at Blue Zoo was a big step for her.

Question: How Should Young People Go about Getting a Job?

McKay and Elder highlighted the importance of good, natural-sounding emails and following up after a conversation. Llewellyn said that she sometimes spends hours on an email, because that becomes the first impression when it lands in an inbox, so each one should count for something.

For all of the women, research as key – research the company you are emailing or sending a showreel to, and tailor everything specifically to them.

Hicks said that she looks at a showreel straight away, so students should put their best work first, not spend loads of time animating their name at the beginning, and show story-based work rather than just animation exercises. “Don’t get too upset if someone doesn’t like your stuff – so much of the industry is about personal taste,” she added.

Hurcombe told the story of one of her staff members, Joe, who put together an animated cover letter when applying for his job. He then went on to do a placement at LoveLove Films, and a permanent role was created specifically for him because of his hard work, and eagerness to learn.

Question: How Can Interns or Placement Students Stand Out?

Much of the advice for interns was similar from all of the women on the panel: be friendly, know what you want to get out of the experience, and don’t be afraid to ask questions.

Llewellyn noted that a can-do attitude and passion are key, and that doing something that you love can be a springboard for a great future. Deneuve and Elder said that writing things down is impressive for them, and something they did themselves to keep track of everything they were learning. McKay said that knowing what you’re good at, and how you want interviewers or employers to remember you is great for interns.

Question: What Are Your Personal Tips on Getting into the Industry?

McKay kicked off the responses by highlighting the importance of getting on with people in a natural way in the media industry: “My boss always says that the most you should want from a conversation is another conversation.”

Elder also talked about the importance of meeting people and keeping in contact – events like those held by Animated Women UK are a great way to get to know people in the industry. She also stressed that students should use their time wisely, and gain as much experience as they can. Elder finished by telling the audience not to give up – the industry can be competitive, but persevering is worth it.

Salmon had some wise words for the audience: enjoy what you are doing, and meet other people who love what they do. Keep learning, ask questions and be nice to people to get where you want to be in the industry.

Deneuve said that networking – not just inside the industry – was super important for her. Networking with people in other industries can open up your mind and help you to learn even more. She also emphasized the importance of listening – really listening – to what people are telling you, and showing an interest.

For Llewellyn, a sense of humor was key – you will meet wonderful, creative and “interesting” people. She said she once heard a great bit of advice: Be nice to people on the way up, because you may meet them on the way down, which she has kept in mind throughout her career. Llewellyn added that being kind to yourself is important too, but be realistic in your skillsets and open to learning from those more senior than you.

Hurcombe discussed the value of networking going to film festivals in the industry that you are interested in, and volunteering opportunities for them – such as the CMC volunteering, if possible. Branching outside of film festivals to other types of festivals is also useful, as you never know who you will meet. She mentioned one of her favorite mottos: “if you don’t ask, you don’t get,” stressing the importance of seeking out opportunities in the industry.

Hicks finished the question with one important piece of advice – don’t forget to be creative!