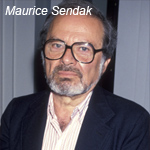 To mark the 85th birthday of celebrated American illustrator and author Maurice Sendak, Google has created a lovely animated Doodle, which debuts on June 10. Best known for penning beloved classics such as Where the Wild Things Are (1963) and In the Night Kitchen (1970).

Several of Sendak’s popular books were adapted into animated TV shows, including the TV special Really Rosie (1975), Little Bear (1995-1996) and Seven Little Monsters (2000-2003). Where the Wild Things Are was adapted into a live-action feature in 2009, directed by Spike Jonez. Sendak passed away on May 8, 2012 in Danbury, CT, from complications of a stroke.

Here is a look at the charming Sendak Doodle.

You may also like...
Related Topics:Google, In the Night Kitchen, Little Bear, Maurice Sendak, Really Rosie, Seven Little Monsters, Spike Jonez, Where the Wild Things Are