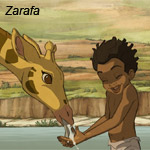 Los Angeles audiences will have a chance to enjoy Zarafa, the beautiful new animated feature by Rémi Bezançon and Jean-Christophe Lie (The Man in the Blue Gordini, Nocturna), when it screens as part of this week’s City of Lights, City of Angels French film festival on Sunday the 22nd at 11 a.m.

Inspired by the true story of the first giraffe in France, the movie follows the adventures of Maki, a young Sudanese boy in the early 19th century who escapes from a slave trader, and a baby giraffe he befriends. The subtle animation was done by Prima Linea Productions (Fears of the Dark, U) in France.

Bezancon told the L.A. Times that the wanted the film to be 2D traditionally animated, just “like the old Disney movies.” He added, “It was like going back to my childhood.”

The festival also includes a screening of Georges Melies’ A Trip to the Moon, (Wednesday the 18th at 2 p.m.) and Bibo Bergeran’s A Monster in Paris (Saturday the 21st at 5:30 p.m.)

For more info about the event, visit colcoa.org

You may also like...
Related Topics:A Monster in Paris, A Trip to the Moon, Bibo Bergeran, City of Angels, City of Lights, City of Lights City of Angels French film festival, Fears of the Dark, Georges Méliès, Jean-Christophe Lie, Nocturna, Prima Linea Productions, Remi Bezancon, The Man in the Blue Gordini, U, Zarafa