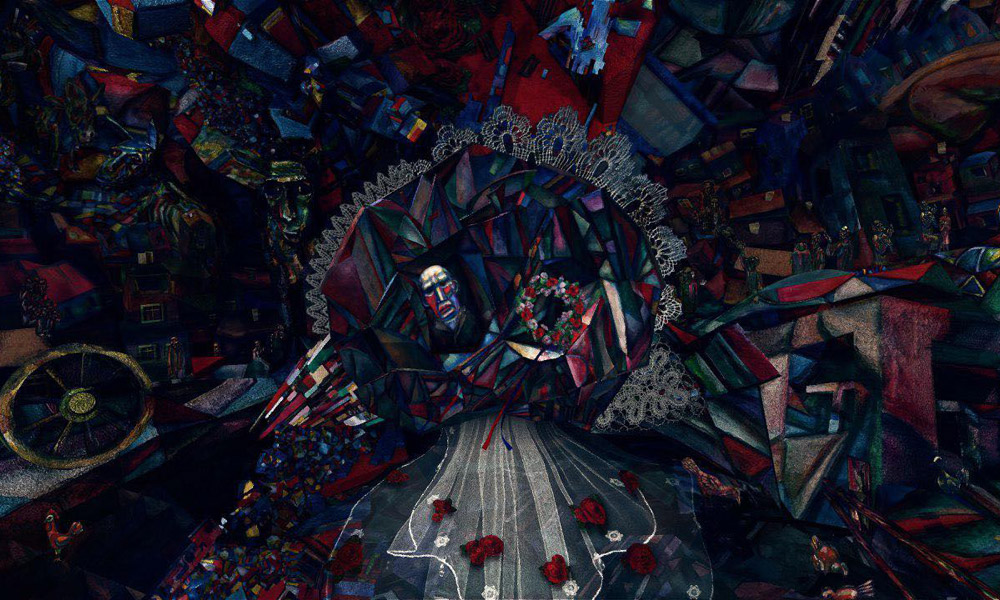 Out of 820 entries, 44 films from 24 countries have been selected for the Oscar-qualifying Grand Competition Short Film of the World Festival of Animated Film – Animafest Zagreb 2021. Most of them hail from France (9), followed by Spain (5), U.K. and U.S.A. (4) and Belgium and Poland (3). Two Croatian films also compete in this global competition (Can You See Them? by Bruno Razum and The Raft by Marko Meštrović), and a Croat was also a co-author of the only Estonian film in competition (The Stork by Morten Tšinakov and Lucija Mrzljak). Notably, this year’s selection includes films from Pakistan, Chile, Iran, Israel, Taiwan and China.

In addition to the usual presence of globally important animation names, the diversity of techniques (this year dominated by classic and computer 2D and 3D animation, with somewhat less stop-motion and puppet animation, and prominent avant-garde and pointillist inspirations and black-and-white visions), visual innovation (such as the never before seen use of Lidar) and opulence, 2021 is marked by a powerful return of coherent narrative, be it comedy, horror, musical, erotica or dystopian horizons among films mostly made during lockdowns. The selection committed noted literary strongholds and a return to ‘little things’ which shape human experience in a clash with modern-day technology. Subjects like memory, violence and the body appear prominently in animation documentaries, videos and films based on actual events.

British animation legend Joanna Quinn is among the biggest names competing at Animafest this spring. When she designed her plump, ambitious and clumsy heroine Beryl in the late 1980s, Quinn probably did not expect to become not only a multiple winner of Annecy, BAFTA and Emmy, an Oscar nominee and winner of Zagreb, but also the heroine of many viewers around the world who felt represented in the dreams and longings of her characters. After a 15 year wait for a new, hand-drawn and hilarious family experience starring Beryl, the two Animafest screenings of Affairs of the Art will surely be sold out.

Tomasz Popakul, the winner of Animafest 2019 and the winner of the 2014 Zlatko Grgić Award, returns to the fest with his new film Moon. He again uses a completely original visual expression, steps into hybrid waters and increasingly frees himself from the narration in favor of the nocturnal atmosphere, but he also features a cheerful sci-fi twist in conclusion.

Comic-book author, animator and three-time Goya Award winner Alberto Vázquez returns with his inherent, ironically coded black-and-white fantasy Homeless Home that touches on the themes of socially conditioned violence and addiction, but also contains a range of strong emotions. The black-and-white aesthetic line continues in Under the Skin, the Bark by the versatile Franck Dion, an Annecy winner. Dion’s latest work is a surrealist meta-film in the rhythm of the Dale Cooper quartet dark jazz about a hunter who learns “on the other side of the mirror” that a script cannot be written for him.

Korean animator Nari Jang introduced herself to the Animafest audience back in 2017’s Student Film Competition, and as is often the case with ‘Animafest students’, she is now back in Zagreb in the top competition. Organizers expect a triumphant return because of Jang’s ability to transform and blend perspectives, forms and scenes from the life of a girl surrounded by unhealthy aspects of social attitudes towards young people is characterized by an extremely mature mastery of selected motives — in her film, Salvia at Nine, nothing seems random. 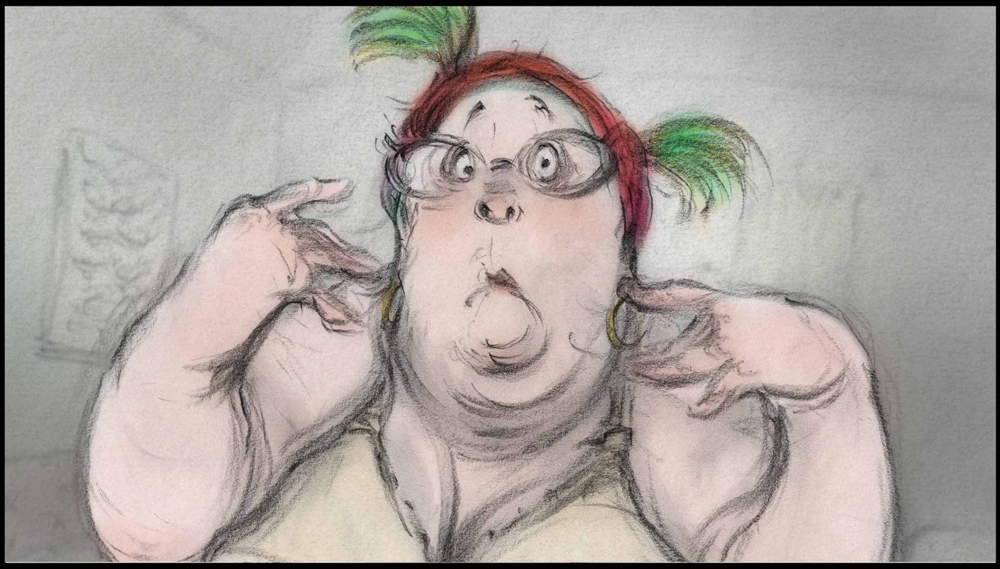 Speaking of visually striking works, Animafest calls attention to Andrei Zhidkov‘s Happiness, based on the story by the Russian writer Alexander Neverov about a little man who seeks happiness in a chaotic world. Although partly based on Soviet avant-garde art and cubism, the ‘crystallized’ and kaleidoscopic appearance of Happiness is extremely original in shaping the essentially gothic atmosphere.

At the heart of the pointillist-striped, neo-noir autobiographical etude Forever by American filmmaker Mitch McGlocklin is the theme of a relationship between advanced technology and human experience, i.e. the infamous algorithms that collect and analyze our private data. Extremely original, cyberspace phenomena achieved by Lidar (Light Detection and Ranging), which correspond to film’s theme and the orange-yellow-red color scheme, Forever arrives from Sundance, and after Zagreb travels to Annecy.

Katarzyna Agopsowicz‘s Prince in a Pastry Shop is a remarkable blend of realistic, predominantly black-and-white drawings with the most beautiful natural history illustrations and unusual, surrealist proportions and ratios in a philosophical-poetic and mildly humorous parable of happiness and ‘little things’. Visually exceptional is the film Monachopsis, whose artistic choices border on the experimental, photographic and comic book with the aim of depicting the psychological states of a girl who feels displaced. The culinary-erotic and animal-metamorphic mastery if Hold Me Tight defines one of those films that do not pretend to bear complex meanings, but push the boundaries of animated expression when it comes to depicting physical relationships.

The wax-drawn adaptation of Edward Lear’s sparkly, absurdist song The Owl and the Pussycat is a work from the quarantine garage of Mole Hill, which also earned him a BAFTA. The Hungary-based British director Daniel Gray, motivated by personal homesickness, used a fantastic premise to show a family’s life cycle in Hide from a very original point of view and mediate feelings of alienation, restlessness, melancholia and claustrophobia. The ethereal, painterly quality of his works with a brilliant light evocation has already earned him awards at the world’s largest animation festivals. 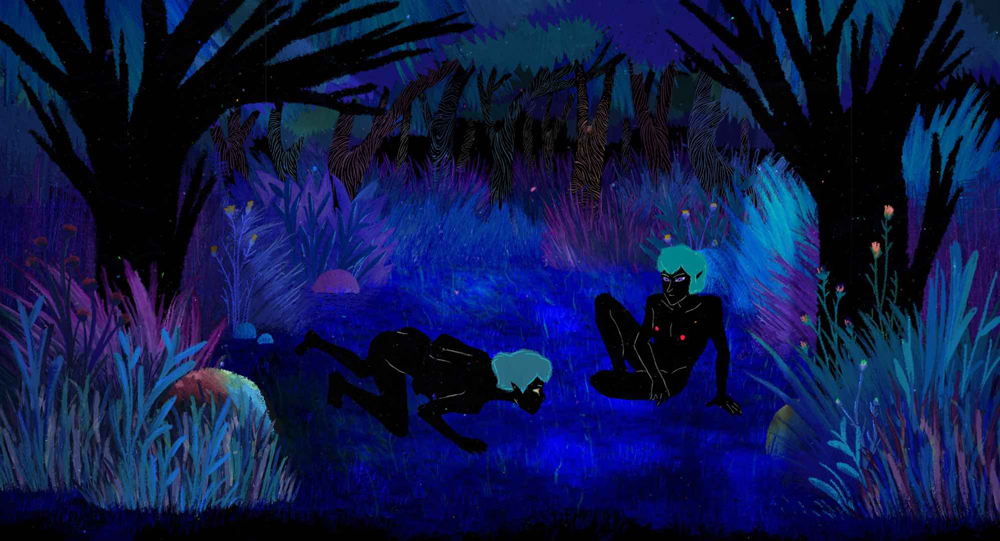 Animafest 2021’s Grand Competition does not lack in different types of humor either. Selection Process is a claymation miniature depicting a commonly alienated hyper-capitalist job interview, while Awkward summarizes several typical ‘public’ situations that reflect the absurdities of modern living. The meta-cinematic musical with a twist Your Own Bullshit, focusing on family oppression, is dominated by a rare combination of claymation and cut-out. The hilarious Mad Max type figurine stop-motion of Mad in Xpain is a satirical depiction of Spain as a wasteland in which a motorized Catholic hierarchy rules over different tribes.

A satire on creation myths, Tales from the Multiverse represents one iteration of a divine computer program that goes awry. Created as a global collaboration of 30 people on the Artella platform, with all the potential of a future web or streaming series, Tales from the Multiverse has it all: conspiracy theories, aliens, dinosaurs and prehistoric people, computer graphics tropes and references to 1950s animated films. Finally, Spaniard Pablo Ballarín — in a film whose title is too long to be reproduced in a press release — romantically merged Ash Ketchum and UFC fighter Pikachu.

The Grand Competition once again offers exceptional animated documentaries, films based on actual events and dedicated to ‘difficult’ topics such as inclusion, minority rights, rape, terrorism, suicide, the body, growing up, etc. Maalbeek, carried out in a pointillist technique and with a unique perspective, is a film about the terrorist attack in the Brussels underground in 2016. Commands is initially a witty, and then a deeply poignant, ‘radio drama’ based on an actual event, which counterpoints the horror of sound with serene scenes from a fast food restaurant.

The French puppet film Precious is a depiction of the failure of inclusion in collective systems dominated by the cruel laws of an emotionally immature childhood, while the Belgian film Easter Eggs (also screened at the Berlinale) is a slightly grotesque coming-of-age film about a typically brutal relationship between two teenagers. The author of the award-winning Egg, Martina Scarpelli, is returning to Zagreb with another black-and-white film dedicated to the issue of (self) perception of the female body: a video for the song A Little Too Much by Grammy-nominated Canadian singer-songwriter Kai.

Another auteur making his Zagreb comeback is one of the most prominent LGBTQ+ animators, Dotan Moreno, with his new film We Were a Sterile Bomb that bears the hallmarks of his poetics – a slow-burning story strongly centered in a socioeconomic context, this time in the residential devastation of southern Israel in 1997. Unlike Moreno’s film, the bright colors of the film Friend of a Friend by Zachary Zezima are not just the context of another LGBTQ+ film, but are also a valuable and ambivalent contribution to the discussion of sexual violence and the dynamics of the victim- perpetrator relationship. 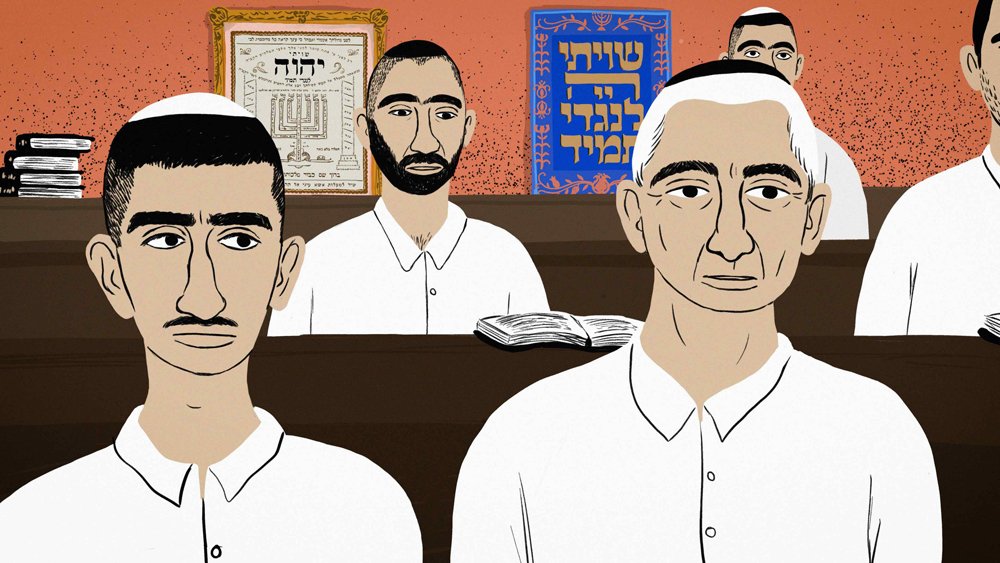 We Were a Sterile Bomb

Every year, Animafest reaffirms its prestigious status with a few films from lesser-known animation regions, into which it gives exclusive insight during the festival. This year, the Pakistani film Swipe earned a place in the Grand Competition as a film in which religious insanity meets digital capitalism. The film’s lavish visuals and dystopian overtone explore the ‘iFetva’ app, through which users decide on death sentences or pardons for violators of insane theocratic norms. After Zagreb, the film will be screened in Annecy — the first Pakistani film in the history of both festivals.

Increasingly present contemporary Chinese animation, on the other hand, very often resorts to mockery of traditional drawing and painting techniques. Gold Is Eating People, a parable of greed narrated in monochromatic ink tableaux with an incredibly ingenious use of planes of a fundamentally two-dimensional space is no exception.

The Taiwanese film Night Bus, a cut-out animation that’s part crime thriller, part revenge horror, points to two important facts that are easy to forget: that a narrative with satisfying twists and functional analepses in artistic animation is possible and that cut-out is not only an obscure artistic technique, but also a narratively justified choice for an expensive genre film.