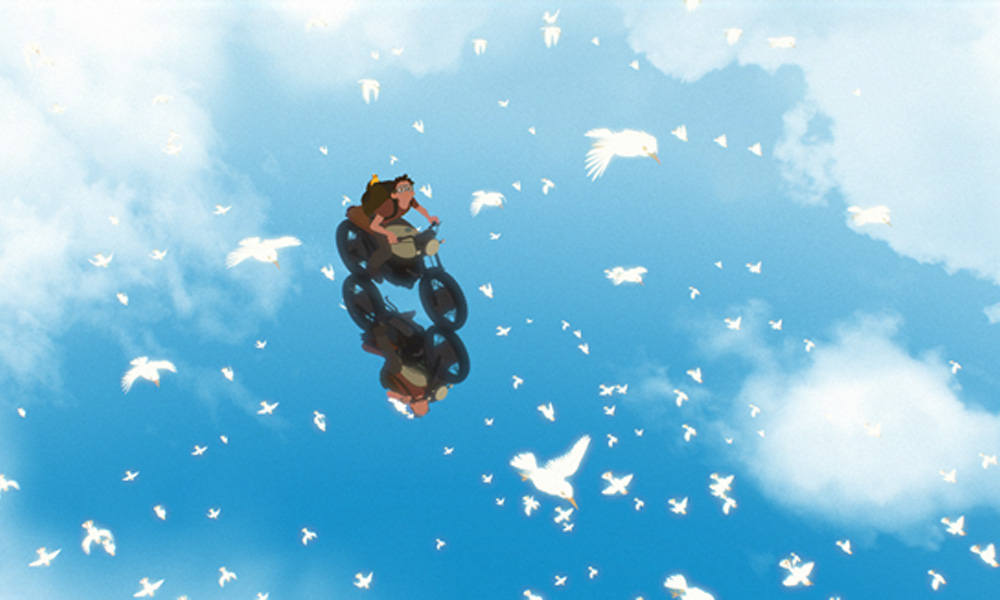 The 29th World Festival of Animated Film – Animafest Zagreb (June 3-8) announces the lineup for its Grand Competition – Feature Film. The selection is traditionally a cross-section of lavish and complex works that represent “fine art as motion picture” — from largescale productions with extensive financial investment to wondrous works by dedicated individuals.

One such solo effort is Away, the debut feature by young Latvian animator Gints Zilbalodis. Focusing on the importance of individual aspirations at a time of global alienation both on the cinematic and non-cinematic level, Away is an archetypal tale of homecoming, following the adventures of a boy on a motorcycle, solving different physical and metaphysical barriers with the help of a small feathery friend. Impressive animated long shots and rides across endless forests, deserts, caves or marine landscapes achieve stunning, often contemplative effects in a film undoubtedly inspired by Miyazaki, which might nevertheless recall artistically refined video games like Journey or Shadow of the Colossus. From directing and screenplay to animation and music – everything in Away is Zilbalodis’s independent work stemming from a pure desire to “teach himself cinema through practice” and the eight years of commitment. This animation Wunderkind, who made his first film at the age of 15 (he also introduced himself at Animafest with his graduation film Priorities in 2015), attracted attention with shorts Followers and Inaudible. Zilbalodis will attend this year’s Animafest’s professional program in person and present his film.

Visually much less lavish, but equally poetical Canadian film Ville Neuve by Félix Dufour-Laperrière is a black and white family-psychological etude set against a backdrop of social and political context and connecting collective and intimate levels in a characteristic Québécois setting. A story about an attempt of reconnecting with the ex-wife and son, inspired by Raymond Carver’s short story, is entirely made by hand out of over 80,000 drawings, with a particular disposition for dreary weather and psychologically nuanced characterisation. Existential anxieties, irreversibility of the past, melancholia, emotional wounds and the pointlessness of idealism, as well as fun intellectualist allusions are also qualities of the second feature directed by the Quebecoise filmmaker.

Ruben Brandt, Collector by the Hungary-based Slovenjan veteran Milorad Krstić centers on a quirky psychotherapy cure through international art theft. This animated contribution to the genre of heist film, with aptly elaborate chase scenes, is often funny in its many and sparkling allusions (to Hitchcock, Méliès, Kurosawa, Eisenstein, Friedkin, Disney, Kazan, Godard, Tarantino, etc.), visual, often ironically reshaped references (to artists ranging from Botticelli, Velázquez, Goya and Caravaggio, to Van Gogh, Picasso, Manet, Chagall and Degas, to Warhol, Hopper and a dozen others), psychoanalytical hooks and mockery of art criticism, without causing any damage to its unusually dynamic rhythm. This psychoanalytical thriller with elements of noir was digitally hand-drawn over the course of six years by an army of 150 animators, creating a glossary of the director’s painterly, cinematic, drama and musical inspirations, among which Picasso (when character design is concerned) holds the central position. If it had happened to be a live action film, this cheerful rollercoaster ride through a melange of genres and styles would make even the big Hollywood studios proud.

Lovers of animation are familiar with the extremely rewarding team up of stop-motion techniques and horror movie themes. The Chilean film The Wolf House by Joaquín Cociña and Cristóbal León is not, however, another proof to what we already know, but a piece that drags horror, fairy tale and folklore from the well-known interpretative frames of “the return of the repressed as a monster” to the domain of engaged film. Initially an exhibition work in progress, the finished project refers not only the opulent and disturbing unconscious, but also dictatorship, propaganda, religion, cultism and racism. Disturbing metamorphoses, achieved by modelling paper character puppets, weird “human” relationships and bloody psychotic visions serve to ominously comment on the suffering that lurks in the familiar, close spaces – the film is inspired by the German cult Colonia Dignidad, led in Chile by the maniac abuser Paul Schäfer. Although it is mostly set in the title house in which the protagonist Maria imagines herself as a concerned mother, this film dissolves these walls by incessant transformations and permutations of objects and characters and the constant camera motion, leaning in terms on the shoulders of giants like Jan Švankmajer, the Quay Brothers, David Lynch and Francis Bacon.

Like every year, Animafest again offers an impressive anime feature. Aragne: Sign of Vermillion by Saku Sakamoto is yet another psychological horror, following a student called Rin who lives in a gloomy rental flat, located in a “problematic” neighborhood, to say the least. Crimes, ghosts, monsters, shamans and mysteries, as well as mythological, grotesquely corporeal, entomological and medical motifs infuse this visually spectacular film by a director who made his name with digital effects in hit films like Ghost in the Shell 2 before presenting this fully independent feature debut, combining 3D and classical animation. The bizarre beautiful film takes viewers on a disturbing journey through a nightmare in which a classical narrative breaks into pieces just like the protagonist’s psyche, while imagination and reality blend into disorienting compounds. Innovative suggestion of a hand-held camera, partially sketchy character nature combined with incredibly detailed landscape and an ample use of the lens flare effect create the formal peak of this impressive title.

The Spanish-Dutch production Buñuel in the Labyrinth of the Turtles by Salvador Simó is a biopic about the making of Buñuel’s documentary film Land without Bread. Shortly after the shocking L’Age d’Or, Buñuel, somewhat fed up with empty artsiness, turned to project of great sociological impact — financed, according to an apocryphal tale (which the film takes as a true story), with the money won on a lottery by anarchist Ramón Acin, Buñuel’s adventure buddy. Partly because it portrayed the appalling poverty of backward rural parts and cruel folk traditions and supported the director’s provocative political views, Land without Bread struggled with censorship issues for almost two decades. Although formally a documentary, Buñuel in the Labyrinth of the Turtles reveals how the director nevertheless infused Land without Bread with his famously specific vision. Modern animation brings outstanding characterisation of the protagonists and many references to other works of this surrealist genius, as well as images of his dreams, memories and personal life. Using fragments from Land without Bread, Buñuel in the Labyrinth of the Turtles leans more on the style of Fermín Solís’s graphic novel, characterised by particularly playful facial expression as transposed in the film.

Another Day of Life by Raúl de la Fuente and Damian Nenow, a co-production between five European countries, is another adaptation (of the namesake non-fiction by Polish journalist Ryszard Kapuściński) and a documentary piece about civil war in Angola. Over the course of three months in 1975, this film follows the events in Luanda and on the front lines through the eyes of the iconic war reporter, whose unique style of hallucinatory poetics captures the chaotic and dirty war with many conflicting fractions. Summarising the tragic events through a cross-section of several individualised protagonists and the main character’s examination of his own role, the film brilliantly mixes rotoscope animation with visual effects and documentary images in the style of the finest representatives of this hybrid film genre. The winner of the European Film Award and Goya Award, which premiered in Cannes, the dynamic war film with an anti-war message will equally impress those interested in Cold War proxy wars and those in search of an engaged portrayal of deep emotions in the context of human suffering.

Funan by Denis Do (France-Luxembourg-Belgium), the winner at Annecy, is another history, Cold War, but primarily family film set in the same year as Another Day of Life, but on other meridians – in Cambodia during the reign of the Khmer Rouge. Following one woman in search of her forcefully separated four-year-old son through the notorious fields of death, forced labor and indoctrination, across a glorious country which is the setting of one of the largest genocides in history, the director carefully depicts her character, based on his own mother. Although partly accompanied by her husband, the protagonist Chou, voiced by Bérénice Bejo, dominates the film — which to a large extent avoids explicit images, but nevertheless calls forth tears with its tragic tale. Funan is also an emotional tale of survival and preservation of humanity in violence, hunger and separation. 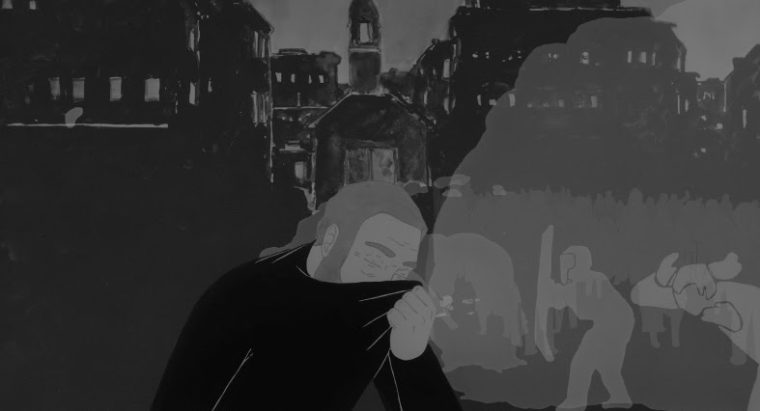 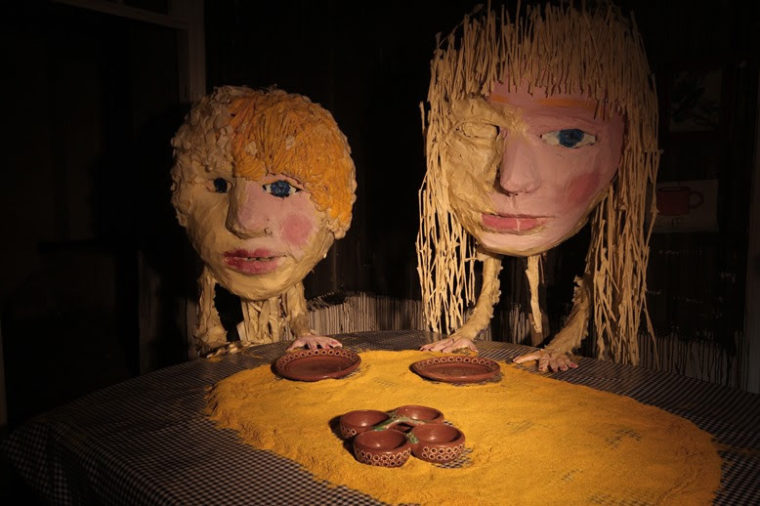 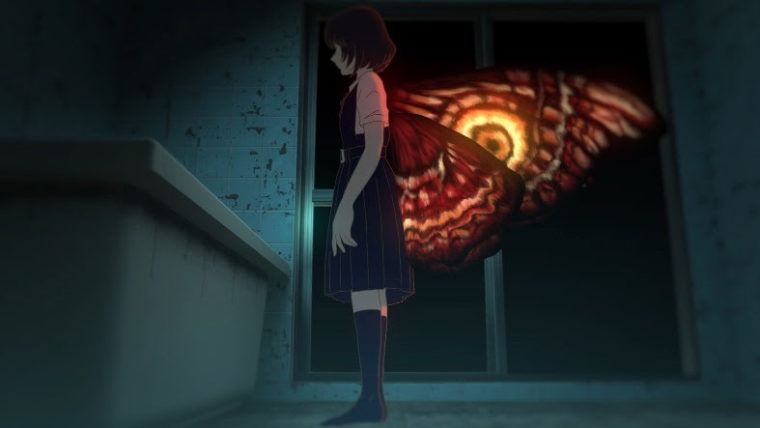 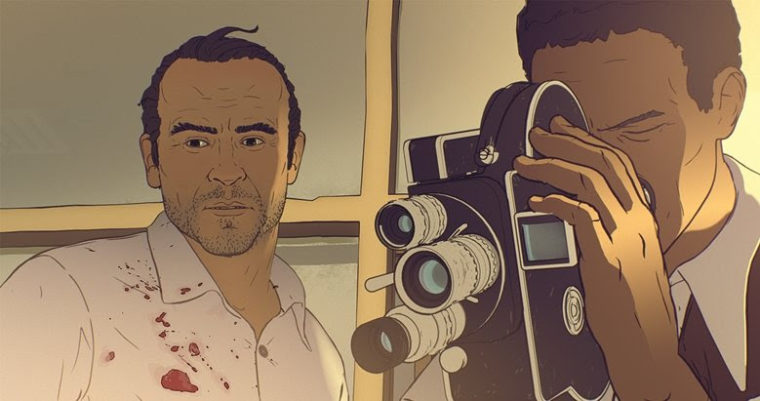