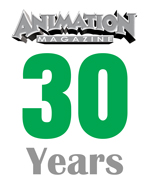 Growth and innovation were the watchwords for the entire industry as technology and creativity pushed the industry to new heights.

There’s nothing quite like having a front row seat to history being made. That’s what it feels like looking back through the pages of Animation Magazine from 1993 through 1995, as we continue our 30th anniversary retrospective.

It was a period where animated content for all ages was exploding in popularity on television, feature animation was still riding the upswing of the Disney Renaissance, resulting in one of the medium’s most-popular and beloved features; and technology continued to transform production, with major advances being made almost daily.

Computer animation became reality in these years, with the first issue of 1993 including a “Who’s Who in Computer Animation,” as well as a cover tease for an article on the CGI “masterpiece” music video for Peter Gabriel’s tune Steam. This issue also featured a collector supplement, a feature than ran for a short time in the magazine spotlighting animation art and collectives.

The summer issue also include a look at the digital revolution in post production, while the autumn tome of that year featured on the cover Margaret Loesch and the hits of the Fox Children’s Network, which had broken out with such huge animation hits as X-Men, Tiny Toon Adventures, Where on Earth is Carmen Sandiego and Batman: The Animated Series. It also included a controversial viewpoint from Ren & Stimpy creator John Kricfalusi, a feature that recurred as a column.

The final issue of 1993, perhaps more than any other, put its finger on the creative pulse of animation at the time, featuring everyone’s favorite moronic head bangers Beavis & Butt-head as part of a look at outrageous animation.

That also was the end of the practice of putting animation creatives or executives on the cover, often interacting with their creations. From 1994 on, the magazine’s covers began to focus more directly on high quality artwork from animation projects, playing to one of the artform’s real strengths. Among the beauties from this year was Where in the World is Carmen Sandiego, Disney’s Pocahontas, Warner Bros.’ Pinky and the Brain, and Peter Chung’s Aeon Flux.

More of the business aspects of animation began to make their way into the magazine, with event such as NATPE and topics from licensing and advertising to European co-productions making their way into print.

The magazine upped its publication schedule in 1994 to five times a year. The May/June issue celebrated the release of one of the most beloved animated movies of all time with a cover story promising “The Untold Story” behind Disney’s The Lion King.

But the biggest story was the explosion of digital animation into visual effects was acknowledged with a cover story on The Mask, the Dark Horse comic-book turned movie that made stars of Jim Carrey and Cameron Diaz thanks to the innovative work of ILM. That same issue also delved into simulation software and how it was coming into play in creating digital animation and effects, a theme followed up two issues later with a cover story on Pacific Data Images’ work on Oliver Stone’s controversial hit Natural Born Killers; and featured historian Jerry Beck’s candid interview with William Hanna and Joseph Barbera.

Tech innovations kicked off 1995 — with the magazine published eight times a year now — plugging on the January issue cover a special guide to “animating on the Macintosh.”

The year wrapped up with a switch back to a focus on computer animation with a look at PDI’s 3D take on The Simpsons, and a cover story on Disney taking a risk with the first CG-feature, a little something called Toy Story.

You may also like...
Related Topics:30 years Animation Magazine