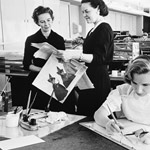 As previously announced, the Academy will be spotlighting female animators with a special event on Monday, August 7: “An Invisible History: Trailblazing Women of Animation.” The discussion is set for 7:30 p.m. in the Samuel Goldwyn Theater in Beverly Hills.

Joining host Mindy Johnson — an author and historian whose Ink & Paint: The Women of Walt Disney’s Animation will be published on September 5 by Disney Editions — will be:

Gretchen Albrecht (Robin Hood); an artist in Disney’s Ink & Paint department in the 1970s who eventually took it over, overseeing the move from painting by hand to digital methods.

Jane Baer (Who Framed Roger Rabbit?); who was one of only a few female animators at Disney when she animated the candles sliding off the sloppy birthday cake in Sleeping Beauty.

Lorna Cook, the lead character animator on The Lion King.

Jun Falkenstein (Despicable Me); animation director, writer and story artist who has worked for Disney, WB, Universal, Hanna-Barbera and DreamWorks.

Virginia Fleener, who began working in Disney’s Inking department in 1942, working at the studio through WWII.