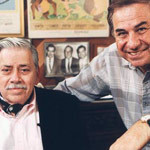 For the past 50 years, movie lovers have enjoyed the wonderful music of songwriting brothers Richard M. Sherman (1925-2012)  and Robert B. Sherman. The brilliant duo’s scores include classics such as Mary Poppins, Chitty Chitty Bang Bang, The Jungle Book, Bedknobs and Broomsticks, Charlotte’s Web, The Aristocats, Snoopy Come Home, The House at Pooh Corner and The Tigger Movie as well as the Disney theme park song “It’s a Small World After All,” (the most performed song of all time).

On Wednesday, June 20th, the Academy of Motion Pictures in Beverly Hills, Calif,  is presenting a special tribute titled “The Sherman Brothers: A Hollywood Songbook,” featuring clips from their films and musical performances by special guests.

The event begins at 7:30 PM at the Samuel Goldwyn Theater of the Academy of Motion Pictures Arts and Sciences in Beverly Hills. For more info, visit www.oscars.org/events/sherman-brothers-hollywood-songbook

Here’s a great piece about the talented brothers.