In the afterglow of last summer’s festival, I knew that Animation Block Party 2013 needed to underscore the significance of our ten-year anniversary. Music has always been a huge part of my workflow. I was the music director of my college radio station and subsequently persuaded future co-workers to listen to endless iTunes mix-tapes. In October 2012, I had one of those Wayne’s World 2 brainstorms, thinking if I booked cool bands that ABP could premiere with a big concert. The Music Hall of Williamsburg was at the top of my list as it’s a superb venue with perfect sound acoustics. I contacted Lisa Schamis, their Private Events Manager and told her I was interested in holding Opening Night at the Music Hall of WB. Lisa thought ABP sounded awesome and was very helpful in scheduling the event. We locked down the date of Thursday, July 25th.

Concert booking can be complicated due to pending tours, records to promote or regions of band etc – various elements must come together for a show to happen. This past winter, Adam Green and Binki Shapiro had a new album available on Spotify. They’re both exceptional singer/songwriters, Adam from the Moldy Peaches and Binki from Little Joy. The self-titled album had an infectiously catchy sound. I spoke with Eric Dimenstein of Ground Control Touring who handles Adam/Binki booking. We talked summer plans and ABP made an offer. They said yes, so we proceeded with the legalese. With a headliner booked, an opening band was needed. Hooray For Earth’s full-length debut “True Loves” was on auto-repeat in my laptop queue. I’d seen them at the Knitting Factory in the dead of February and knew they’d be a great pairing with Adam and Binki. I called their booking agent, Robin Taylor of Inland Empire Touring. We had a long chat, I explained ABP and she thought it sounded like a good fit for Hooray For Earth. We settled on a contract and the music lineup was set.

This may seem like it all happened quickly, but it took many months, not half a paragraph. If you don’t know these artists, definitely listen to them. They’re all for real and will add a huge spark to our tenth anniversary. Of course, ABP is all about animation – and there will be exclusive content at the Music Hall of Williamsburg from Cartoon Network, Nickelodeon and Pixar. Tim Harrington, a very funny comedian who is also the lead singer of the NYC-based Les Savy Fav, will host the event. You can buy individual tickets to Animation Block Party Opening Night on the Music Hall of Williamsburg website or weekend passes are available via Flavorus. 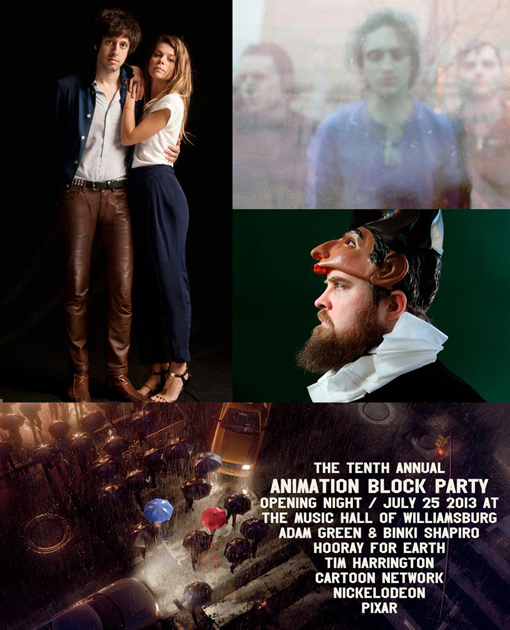