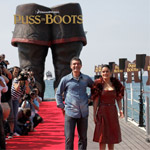 Jeffrey Katzenberg and his hard-working team at DreamWorks Animation have been part of the Cannes Festival scene ever since they introduced Shrek 2 to the jaded attendees of the event in 2004. This year, stars Antonio Banderas and Selma Hayek were on hand to show off some impressive 3-D footage from the studio’s much-anticipated holiday feature Puss in Boots. The two Spanish-speaking superstars also took part in a photo call on the pier of the Carlton Hotel, posing in front of a giant pair of Puss’s boots as flamenco dancers entertained the crowds.

Set for a November 4 debut the film features the swashbuckling feline in a thrilling adventure that predates his meeting with Shrek. Directed by Chris Miller, the film features the voices of Banderas as Puss, Hayek as his romantic interest Kitty Softpaws and Zach Galifinakis as his double-dealing old friend Humpty Dumpty). Billy Bob Thornton and Amy Sedardis also star as hillbilly outlaws Jack and Jill. 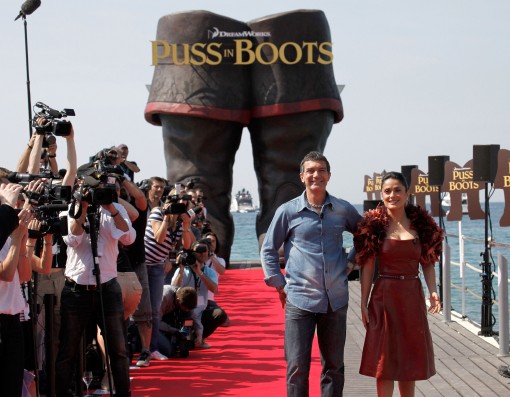 CANNES, FRANCE - MAY 11: Actor Antonio Banderas (L) and actress Salma Hayek attend the 'Puss in Boots' Photocall at Carlton Beach during the 64th Cannes Film Festival on May 11, 2011 in Cannes, France. (Photo by Lucian Capellaro/Getty Images)

DreamWorks is also screening its hot summer release Kung Fu Panda 2 out of the competition in Cannes.

Here’s the trailer for Puss in Boots: