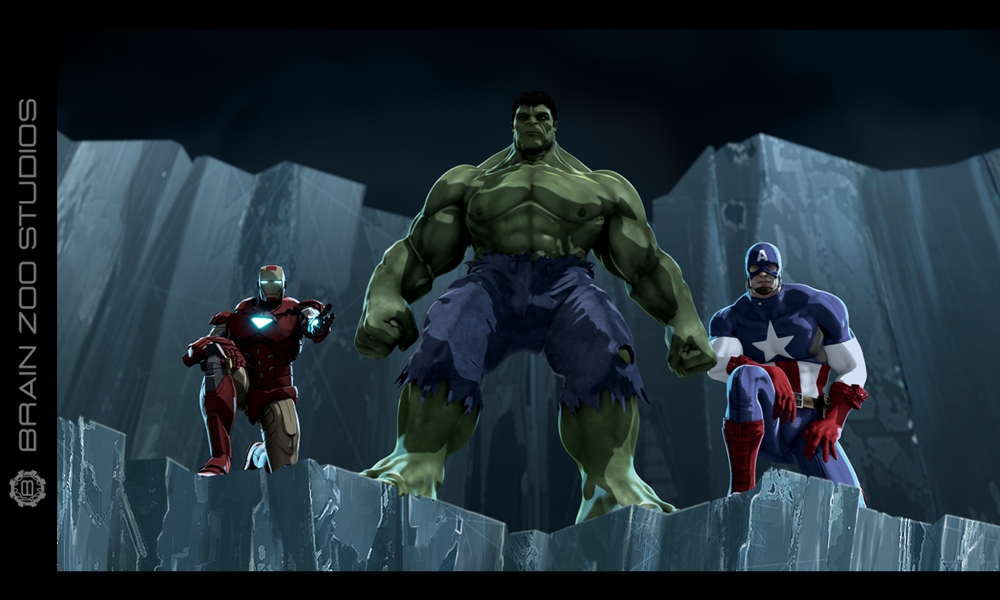 ***This article originally appeared in the January ’21 issue of Animation Magazine (No. 306)***

“The number one quality of Brain Zoo is our flexibility,” says Davoudian. “Creatively and technologically, keyframe or mocap animation, offline rendering or real-time. There are studios around the world in which you can look at their work, and they have a style of their own. Brain Zoo is style-agnostic or, as we like to say, ‘We are your style!’” 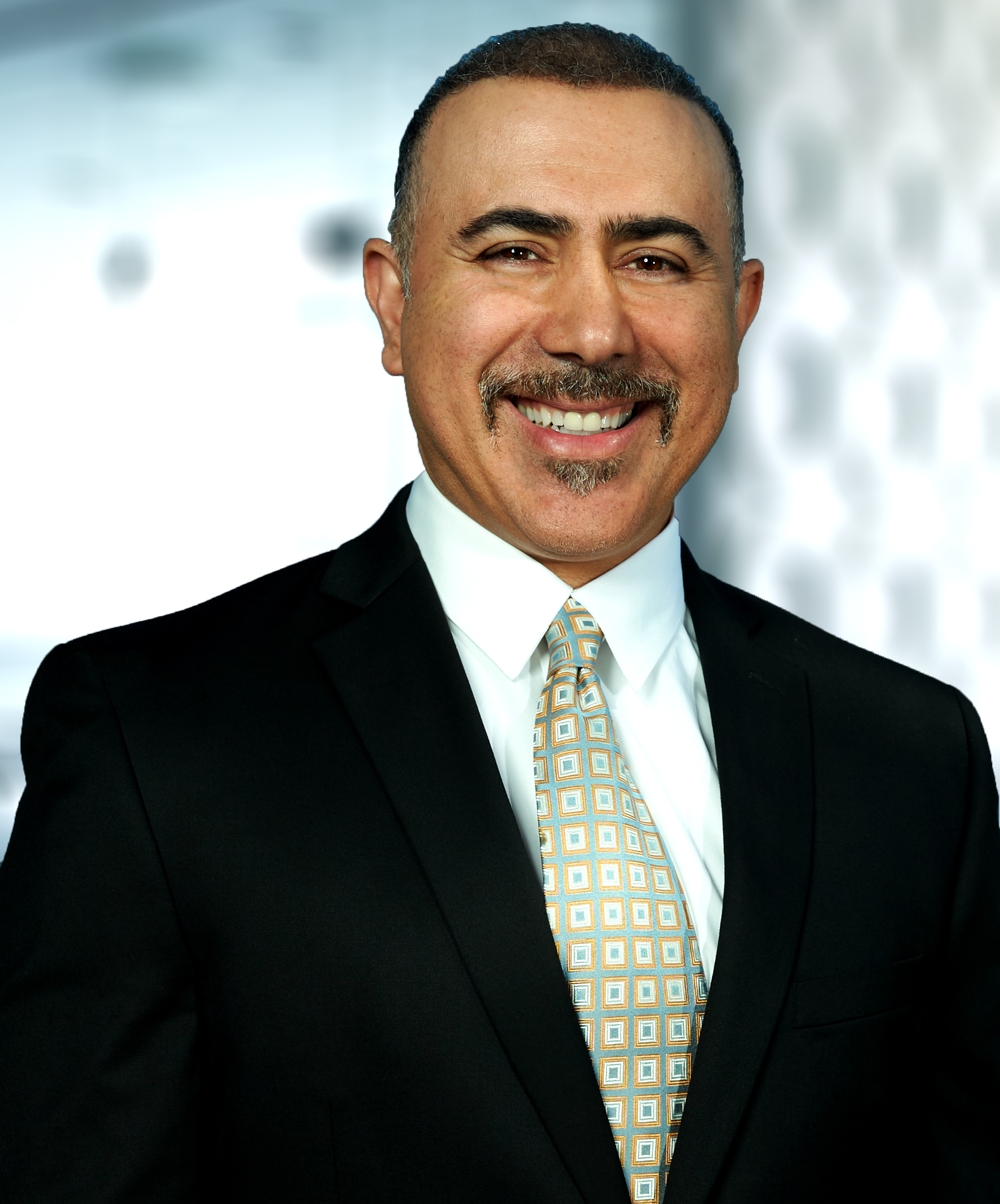 He adds, “When you see our work, it goes across the spectrum. From realism to stylized to cartoony, it’s a wide range of capabilities. Second is our hunger for new technologies and techniques. Real-time is relatively new to most animation studios and clients outside of the gaming business. Brain Zoo has been at the forefront of real-time animated productions for the past 20 years. We were the first to use the Unreal Engine 4 on Marvel’s Guardians of the Galaxy series and Disney’s Doorables web series. Our proprietary tools and pipeline are built for production speed while maintaining high levels of quality. This workflow has given us the ability to produce two full-length animated feature films for Marvel in a seven-month production schedule.”

“Brain Zoo is a creative studio which is not solely focused on animation production,” notes Davoudian. “The company is actively involved in development, design, technology, look dev and production management in multiple industries. We are also in the business of creating original IPs such Pepe & Lucas, Nora and the upcoming D.Y.K. The company is also developing some popular comic-book titles into series and films. We consider ourselves a one-stop creative partner that brings a lot of expertise to the table.” 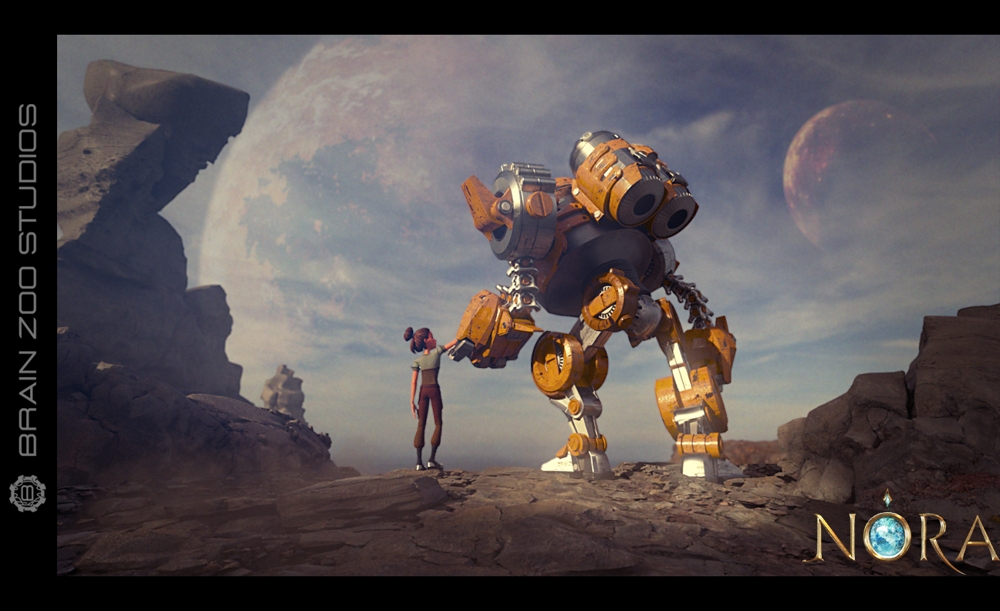 The artists at the studio use a variety of CG tools and effects software to produce their work. Davoudian says Brain Zoo has been using Unreal Engine for about 20 years, as well as Maya, After Effects, Unity 3D and, most recently, Blender, which is showing a lot of promise overall. With the COVID pandemic restrictions, the studio has an infrastructure which is built for about 80 employees. Brain Zoo has partnerships with overseas shops that scale its capabilities to about 400.

Davoudian began his CG career during an internship semester away from the ArtCenter College of Design, working on game titles such as Phantasmagoria, Wing Commander 3 and TV’s Spider-Man: The Animated Series. This experience gave him solid CG production experience and a great introduction to the business. When he returned to ArtCenter to finish his studies, he decided to start Brain Zoo to create two of his animated projects for school. 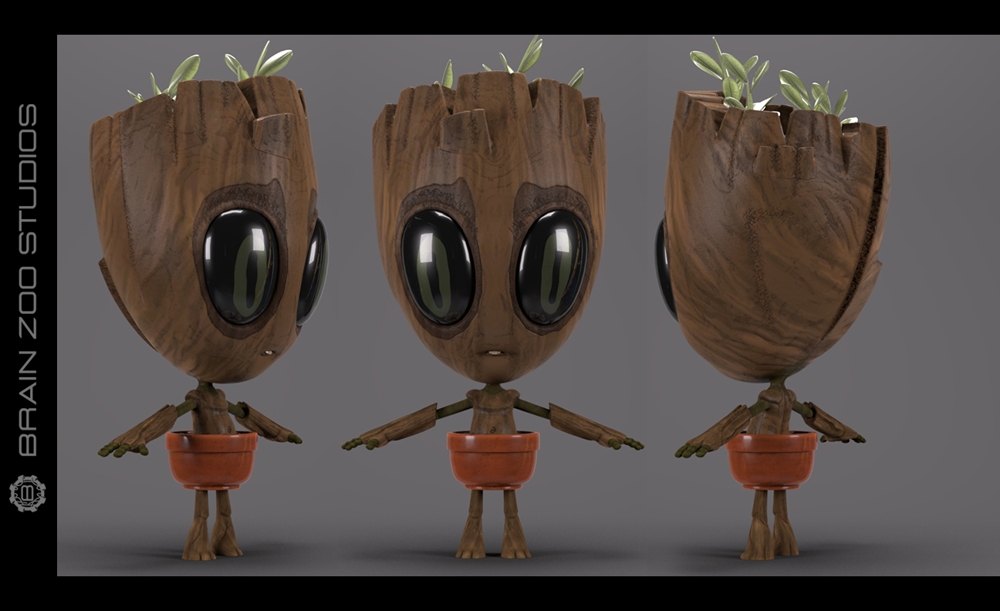 “With the help of a couple of partners, we launched the company during the first E3 game conference,” he recalls. “The company started with two divisions; one was the 3D animation department, and the other was at the beginning of a little industry known as the world wide web, where we created websites for companies and entertainment clients. The animation division of the company was involved in music videos, game cinematics, trailers and film VFX. Films like Mighty Joe Young, Armageddon and Meet the Deedles were some of the projects we worked on. Our long-term goal has always been original content and storytelling. Those early years, game cinematics gave us the best outlet to tell stories and establish an effective pipeline that garnered excellence in quality and the shortest time possible on narrative projects.”

As a young boy, Davoudian was hugely influenced by Ray Harryhausen movies such as The 7th Voyage of Sinbad and Jason and the Argonauts at an early age. “They awakened my curiosity, and so began my interest in fantasy films and stop-motion,” he recalls. “Later it was Land of the Lost and the Gumby series. Another big influence, like most people of my generation in this industry, was The Empire Strikes Back. That opening scene with tauntaun running across the snow and leaving footprints and the following AT-AT snow battle scene inspired a lifelong obsession for me. And during my career, I’ve been fortunate to have worked with both Doug Beswick and Harry Walton, who were stop-motion and VFX masters that worked on those early influences at Brain Zoo.” 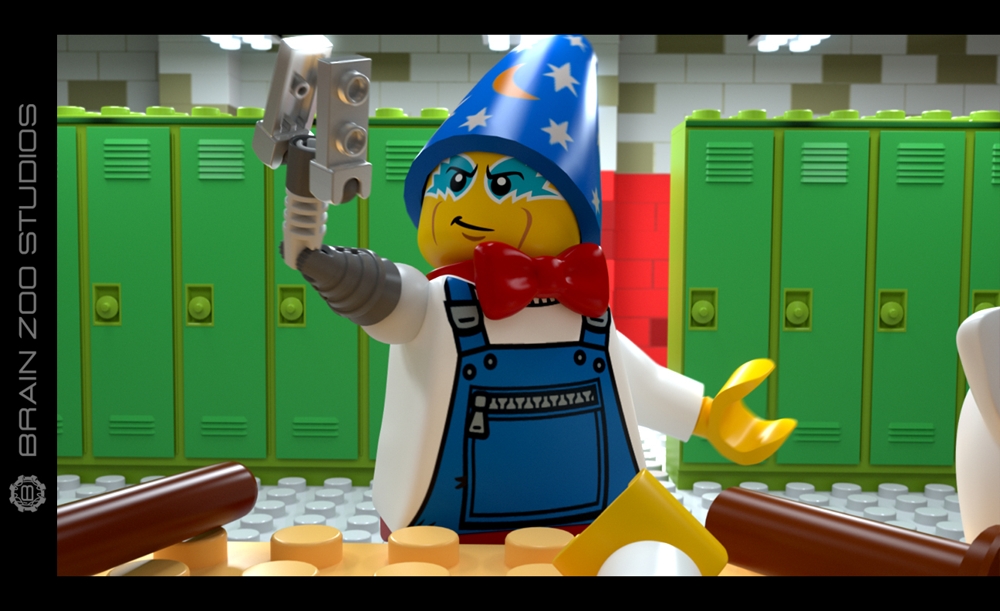 We ask the Emmy-winning executive creative director to tell us a little bit about what Brain Zoo is working on these days. “I can talk about a couple of projects,” he says. “Wasteland 3 for Microsoft, which is similar to most of the projects we work on from start to finish through the studio. The only thing that we did not do is the audio. We usually design, storyboard, pre-viz, direct, produce assets, animate, light, render, composite and edit on all the projects we produce, with few exceptions. The other project is our next original series titled D.Y.K. (Dangerous Young Killers).”

Davoudian admits that outsourcing of animation work is always a challenge, but he believes that it’s a good force for innovation when it comes to production. “The more significant challenge is educating clients on the viability of real-time production,” he notes. “It’s not entirely the same pipeline service providers and distribution clients are used to working with. Large studios have a pipeline that has worked for them for many years. Real-time changes that process quite a bit, and it’s not a proven pipeline or process for them.” 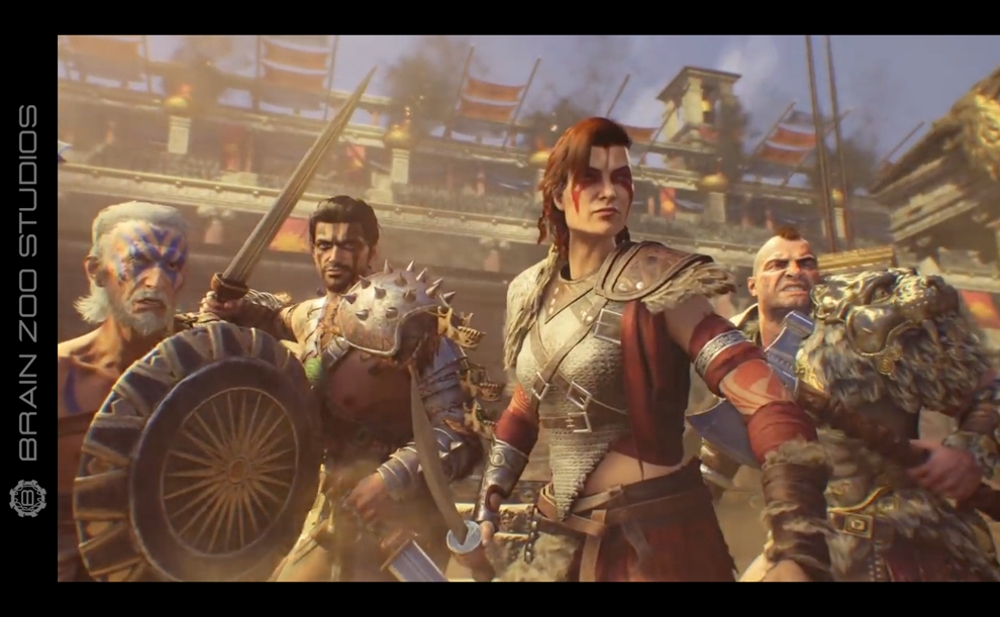 He says many of the animation vendors don’t have a real-time pipeline or the experience to work with it. “Real-time has its workflow, and it’s not just ‘push the button and it renders,’” Davoudian explains. “The entire pipeline from assets to animation to lighting and rendering is affected. This scares producers and executives. But what they don’t understand is that the benefits are astronomically greater if you have the right partner.”

Like most of the professionals working in the animation biz today, Brain Zoo has pivoted towards a flexible, virtual studio model. “A company can now get all its productions and clients serviced without having a location,” Davoudian says. “All the tools are there to make this happen. This is huge! Animation is also moving away from just being stylized cartoons for kids. What I see in the animation marketplace, which includes gaming, is a growth in demographics. The 50-year-old generation and younger have all grown up on video games and animation. From Atari to Xbox and PlayStation. We are now globally and generationally gamers and animation consumers. That is a bigger market space!” 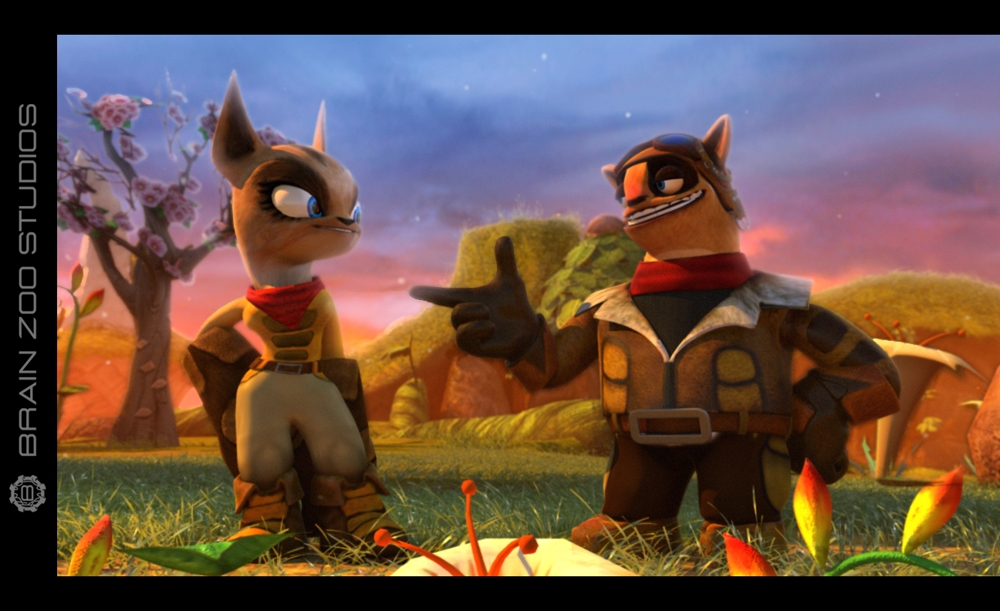 He also believes that the industry is ready for major creative changes. “There is so much we can do with new look development and visual styles with today’s technologies,” he offers. “But what I see is the same shapes, styles, lighting and rendering on TV and animated films. The visual effects industry suffers from this as well. You used to be able to tell which studio did the VFX for a movie. As an industry, VFX hit true photorealism in the mid-2000s. Nowadays, everyone uses the same tools, software, techniques and renderers, so the work looks even across the board. You can’t tell which studio did what. So, if the little studio is doing the same quality-level work as a big studio, why do you need the big studio? And with AI and machine learning coming on board, you can be sure any gaps between animation/VFX/gaming studios will eventually evaporate!”

For more info about the studio, visit brainzoostudios.com.