Frozen won the song category for “Let It Go,” with the winner announced just after the song was performed to a standing ovation by Idina Menzel.

Gravity won the best visual effects in a movie. The Alfonso Cuaron movie was heavily favored to win, and it did.

Here is a transcript of the backstage interview session with Mr. Hublot filmmakers Laurent Witz and Alexandre Espigares:

Q. I’m sorry. I’m going to ask the question in French, if you don’t mind, and then I’m going to say it in English so my colleagues will understand. There’s eighty French animators working at DreamWorks. There’s a bunch of animators working at Disney. It seems to me there’s some kind of French/Dutch in the animation and we see a lot of animation from France winning Oscars. [Speaks in French]
A. (Laurent Witz) Perhaps there is a French [speaks in French]
A. (Alexandre Espigares) [Speaks in French]
Q. The film is endearing and how did you come up with the inspiration for your character, Mr. Hublot?
A. (Laurent Witz) There is a fantastic sculptor we work with, Stephane Halleux. He’s doing fantastic sculptor and characters. So, that was the first inspiration of Mr. Hublot and he’s a great man. Yeah.
Q. Also, the short film has been made thanks to the Luxembourg Film Fund. So, if you could talk because lately the Luxembourg Film Fund is being like a good ending for short films and animation. How did you came about that and what are you doing next?
A. (Alexandre Espigares) What Film Fund were you referring to? [Inaudible]
A. (Laurent Witz) The movie has been made between Luxembourg and France. There is a part of the production made in Luxembourg because you have two company, one in Luxembourg in production, another company in Lorraine, in France. It’s [Inaudible]. We work together with these two little company and, yes, Luxembourg is a good place to do such shot movie because we’ve done it between Luxembourg and French and France. Sorry.
Q. What are you doing next?
A. (Laurent Witz) Next we are developing idea about animated feature film and TV series, as well. So we are doing a lot of work about that about next step.
Q. Could you just differentiate when you speak who it is, where will you keep the Oscar in your house?
A. (Alexandre Espigares) Could you repeat that question, please?
Q. Where are you going to keep the Oscar in your house?
A. (Laurent Witz) I don’t know. I didn’t expect to have an Oscar. I didn’t think about that. But I will, you know, my house is very small so I will try. I will find somewhere to put the Oscar. Thank you very much.
A. (Alexandre Espigares) It’s heavier than I expected so I might use it to work out.
Q. You’ve said that it was a slice of life but it’s quite a beautiful detailed slice of life. What was the most important aspect of getting this right in terms of the environment and this beautiful relationship?
A. (Laurent Witz) The thing is that we develop relationship between Mr. Hublot and the dog, but it was in order to put poetry in the film to have to bring emotions through characters. That was the first purpose of the first goal of Mr. Hublot or the first goal. Even if we made so much work on details on everything, you know, but the first proposal was to have to bring emotion and to have poetry in this movie. Thank you.

Here are the comments made by Tim Webber in accepting the VFX Oscar for Gravity:

“On behalf of all of us, thank you so much to the Academy, for this honor in a year with such amazing visual effects. Visual effects and filmmaking is all about the team and there’s far too many to mention properly but I’d like to mention David Heyman, Nikki Penny, Emmanuel Lubezki, all of the shooting crew, RSP, and the incredible team at Framestore. It seemed like a crazy project so thank you to Warner Bros. and in particular Chris DeFaria for believing in it. To George Clooney and especially Sandra Bullock for filling our visual effects with life and with emotion. But most of all, to Alfonso Cuarón for having, with Jonás, the vision of this breathtaking film, the audacity to make it happen and the courage to trust us to have such a big part in making it come to life. And finally, thank you to our families and the families of all visual effects artists. Thank you very much.”

Here are the comments made by Chris Buck, Jennifer Lee and Peter Del Vecho in accepting the Oscar for Frozen:

“Lee: We’re gonna do this together because we’re collaborative, but we’ll be fast. Del Vecho: First, we want to thank each and every person at Walt Disney Animation Studios, our family. We are so proud of you for making the film as magical as it is. And we’re bringing this home to you. Lee: And for our personal families and dearest friends, thank you so much for supporting us through this hard work. And for really being our inspiration. Buck: And finally we’d like to dedicate this to our guardian angel, that’s my son, Ryder Buck. Thank you, Ryder. Lee: Thank you.”

Here are the comments made by Laurent Witz in accepting the best animated short film Oscar for Mr. Hublot:

“Sorry, lot of emotion. I have to take a paper. Thank you, the Academy, for this award. Thank you for supporting shorts and new talents. It’s my first movie as director and producer. The first movie of Alexandre as co-director. I feel it’s an American dream. Thank you Stéphane Halleux, your fantastic [unintelligible] and artwork, you deserve an Oscar, my friend. Thank you, Mickael, Pascal, David [unintelligible], Li-Lo and the rest of the team. Their work was [unintelligible]. Many thanks to Film Fund Luxembourg, Guy, here, the CNC [unintelligible], ARTE. Thank you to my family and especially Audrey and my children. Thank you. I love you. And finally, thank you Mr. Hublot for making this dream become reality. Thank you very much. Merci.”

Us? We think Idina Menzel’s performance of “Let It Go” from Frozen is going to bring down the house. 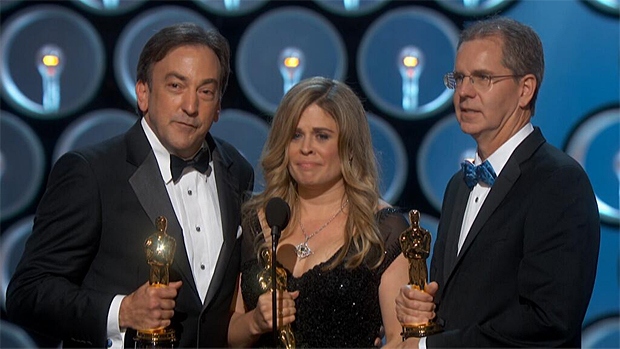 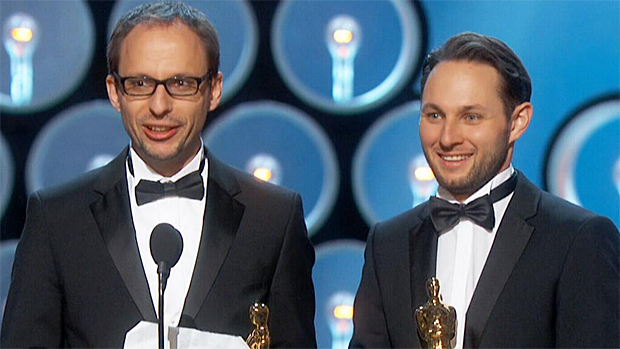 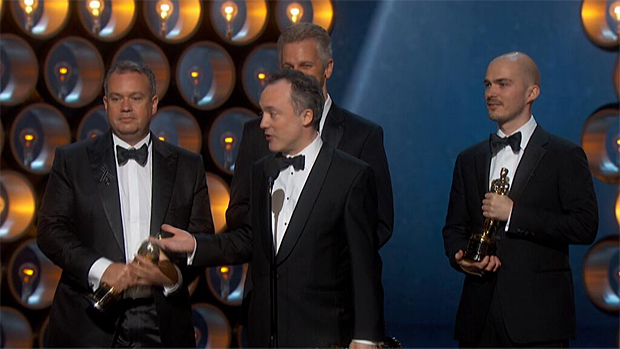 Oscars 2014: Award for Achievement in Special Effects goes to the team behind Gravity 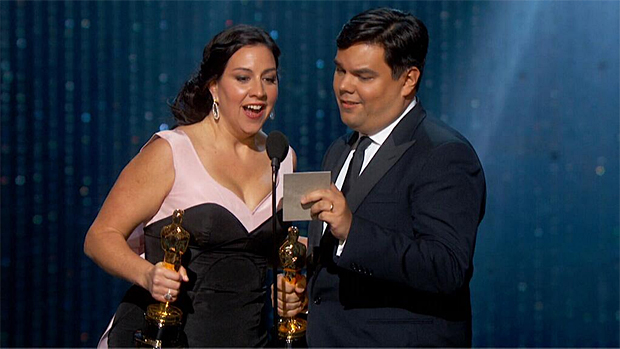