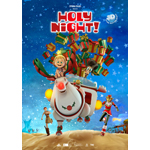 The 3D Challenge will launch next week (December 20-24) and submissions are accepted through Jan. 31. Winners will be announced in February. Details on entering can be found online at www.the3dchallenge.com, and through the contest’s social media accounts on Facebook, Twitter and YouTube.

Dygra Films animation studios is launching The 3D Challenge, an online contest for CGI animators, which will give them the chance of showing their work in the Digital 3D movie Holy Night!, the fourth feature film of the Spanish production company.

The 3D Challenge will launch next week (December 20-24, before Christmas). Animators can send their works until January 31. “It is about creating little scenes, 15 or 20 seconds long, in which the contestants will have to animate one of the sheep of Sara’s flock, one of the main characters of Holy Night!”, Juan Galiñanes, director of the movie, says. “We are eager to see the animations”.

Each contestant can send as many animations as they want, all of them will be included in the contest. The results will be announced by mid-February. The animation sequences and names of the winners will appear in the credits of the movie Holy Night!, whose production is completed and will be premiered on Christmas 2011.

Online social networks will be a very important means for the event, which will spread through different channels: the blog “www.The3DChallenge.com”; the Facebook account “Holy Night! The 3D Challenge – You Dare? ¿Te atreves?”, Twitter’s @HolyNight3D and Youtube’s channel “The3DChallenge”.

With this initiative, Dygra Films wants to approach new talent through an innovative proposal. From its establishment, Dygra has always gone for innovation, talent, training and technology in order to be in the vanguard of the animation and digital content production.

With Holy Night!, Dygra Films throws its biggest bet: a spectacular family adventure with a breakthrough concept. Christmas Eve: two fantasy worlds coexist in the living room of a house, two traditions confronted. Santa’s sleigh disappears and Baby Jesus is kidnapped. Who will save the most magical night of the year?