The nominees for the 84th annual Oscars were announced Tuesday morning, with the best animated feature race falling to

None of the animated features made the nine-title Best Picture race, which included The Artist, The Descendants, Extremely Loud & Incredibly Close, The Help, Hugo, Midnight in Paris, Moneyball, The Tree of Life and War Horse.

In the best animated short film category, the Academy nominated

The five features nominated for the Best Visual Effects Oscar are

The Adventures of Tintin did receive a nomination for its score by John Williams, while Rio was one of the two movies in the Best Song category, with “Real in Rio” by Sergio Mendes, Carlinhos Brown and Siedah Garrett. “Man or Muppet” from The Muppets by Bret Mckenzie scored the other nomination.

Surprisingly missing from the nominees list this morning were Steven Spielberg’s The Adventures of Tintin, Arthur Christmas, Cars 2 and Winnie the Pooh. The awards also marked a wonderful coup for New York-based indie GKids which picked up the two foreign 2-D hand-drawn animated movies Chico and Rita and A Cat in Paris. In the shorts category, Warner Bros.’ I Tawt I Taw a Puddy Tat was one of the surprise shut-outs.

The winners will be announced at the 84th annual Academy Awards ceremony on Sunday, February 26, 2012, at the Kodak Theatre televised live on ABC.

You can check out the complete list of nominees at Oscars.com 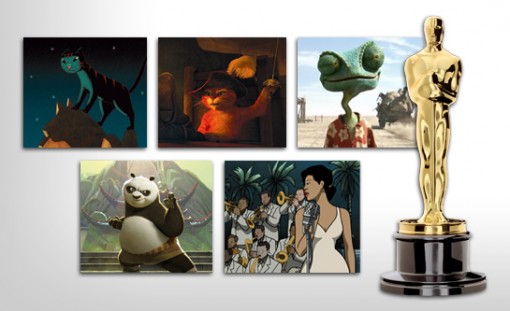 The nominees for the 84th annual Oscars