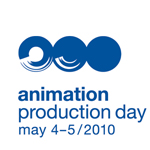 Seventeen projects from eight countries have been selected for the Animation Production Day, a business platform event for the animation industry hosted by the 18th Stuttgart International Festival of Animated Film and FMX 2011.

The projects will presented in one-to-one meetings. Representatives of 46 participating companies will meet producers, world sales companies, broadcasters, banks and equity investors to discuss new financing channels, product strategies and possible options for exploitation, as well as the brand potential of their projects.

Seven projects from Germany are among those selected, as well as projects from Great Britain, Spain, Columbia, Lithuania, Russia, Israel and Switzerland. This year, the projects under negotiation can boast a total production volume of more than 65 million euros.

On its fifth anniversary the event will, for the first time, feature a conference which bring together representatives of ARD, ZDF and KI.KA TV channels with German producers for an exchange of ideas and a discussion of current programming challenges. The Conference on TV and Production in Germany for Children, Youth and Animation, will take place May 2 in Stuttgart’s Literaturhaus, and is a joint event run by the APD and the German Producers’ Alliance. At the conference, the Alliance will present its current study on “TV and production for children, youth and animation”. This study will deliver, for the first time in years, authoritative figures on the situation on the German market.

You may also like...
Related Topics:festivals, FMX, Germany, Stuttgart Festival of Animated Film