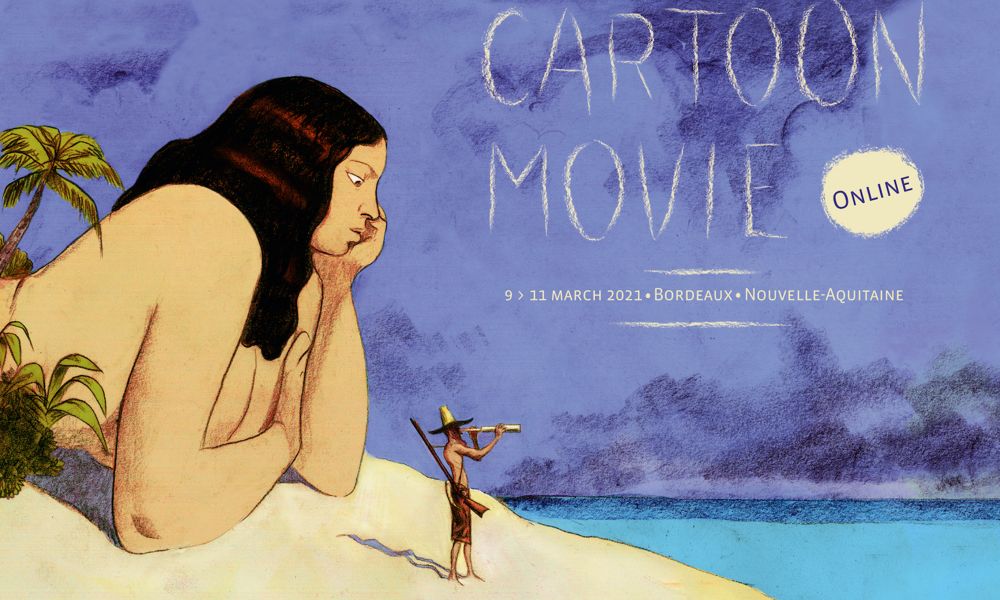 One of the most exciting aspects of France’s Cartoon Movie pitching and co-pro event (cartoon-media.eu), which takes place online March 9-11 this year, is that we are treated to a great snapshot of what European animation filmmakers are working on in the years ahead. Here is a sampler of 15 titles that piqued our interest. We’ll be watching their progress closely and hopefully we can all get to see them in a theater or on a streaming service in the near future.

Blind Willow, Sleeping Woman
The official synopsis for this adaptation of short stories by Haruki Murakami is as intriguing as you can imagine from the brilliant Japanese writer of award-winning books such as Norwegian Wood, The Wind-Up Bird Chronicle and 1Q84. “A lost cat, a giant talkative frog and a tsunami help a banker, his frustrated wife and a schizophrenic accountant save Tokyo from an earthquake.” First-time writer-director Pierre Földes, who has many credits as a composer (L.I.E., Babylon Fields) is the talented man in charge of this 2D-animated French-Luxembourg-Canadian co-production. (Cinema Defacto, Miyu Productions, Doghouse Films, Micro_scope, Unite Centrale and Cinema De Facto). 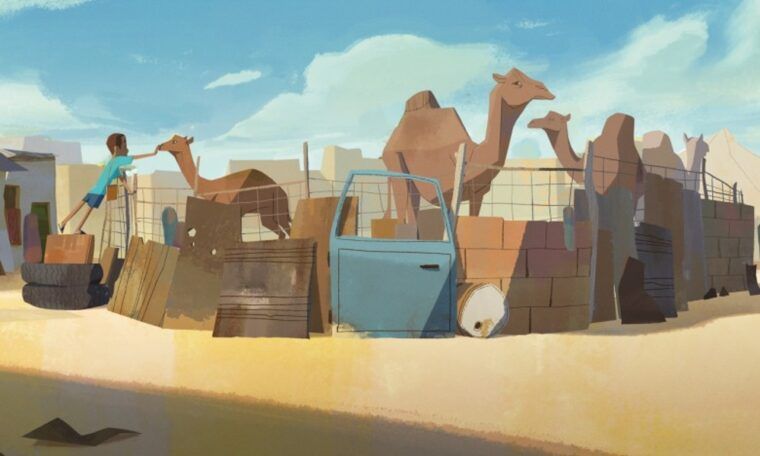 Caramel’s World
European Film Award winner Salvador Simó (Buñuel in the Labyrinth of the Turtles) is back with another fascinating adaptation of a book by Gonzalo Moure. The plot centers on a deaf child who lives in a refugee camp in the Sahara and forms a friendship with a camel by reading the animal’s lips. Spanish company Koniec Films is producing this poignant tale about a young poet’s coming of age.

The Character of Rain

The Character of Rain
In this charming, eccentric movie directed by Liane-Cho Han (storyboard artist and animation director on films such as Calamity, The Illusionist, Zarafa, Ethel & Ernest, Leap!, Long Way North and The Little Prince) and written by Han and Aude Py, a two-and-a-half-year-old Belgian girl born in Japan thinks she is God, that she can make plants grow in the garden, or cross the sea by foot. But her world soon falls apart when she learns that she will have to leave Japan eventually. Based on Belgian author Amélie Nothomb’s bestselling book. Produced by Maybe Movies and Ikki Films (France). 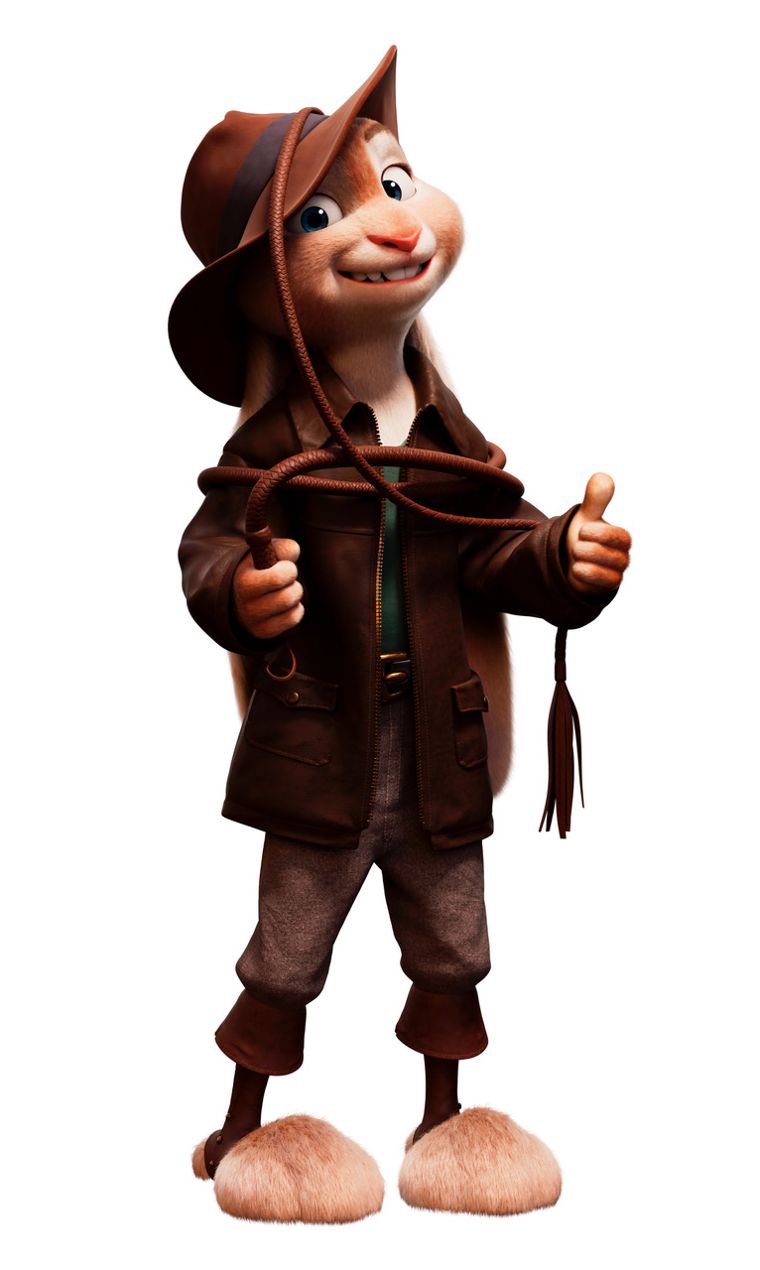 Chickenhare and the Hamster of Darkness
This eighth movie by Belgian studio nWave is directed by Ben Stassen (Fly Me to the Moon, A Turtle’s Tale, Son of Bigfoot, The Queen’s Corgi) and Benjamin Mousquet, with a script by Dave Collard (staff writer on Family Guy). The hero of the tale is Chickenhare, half-chicken and half-hare, who has to disguise himself as a hare to avoid being bullied by his peers. Accompanied by his faithful servant Abe (a sarcastic turtle) and Meg (a martial arts expert skunk), he sets out to find the powerful scepter of the Hamster of Darkness before his evil Uncle Lapin gets his paws on it. A co-pro between nWave and Octopolis in France. 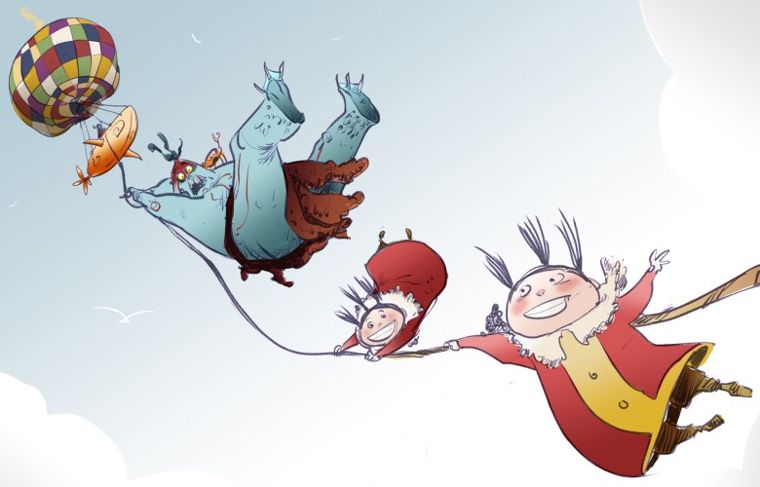 Eyeballed
Animation veteran Paul Bolger (director of Happily N’Ever After, storyboard artist on features such as The Pirates! Band of Misfits, lead animator on The Thief and The Cobbler) is attached to this feature about a big bad monster known as Balor of the Evil Eye, whose gentle side is awakened when he meets six-year-old twin girls named Ifa and Shifra. Script is penned by Irish scribe Barry Devlin (A Man of No Importance, My Mother and Other Strangers) and produced by Irish toon veteran, Monster Entertainment chair Andrew Fitzpatrick. 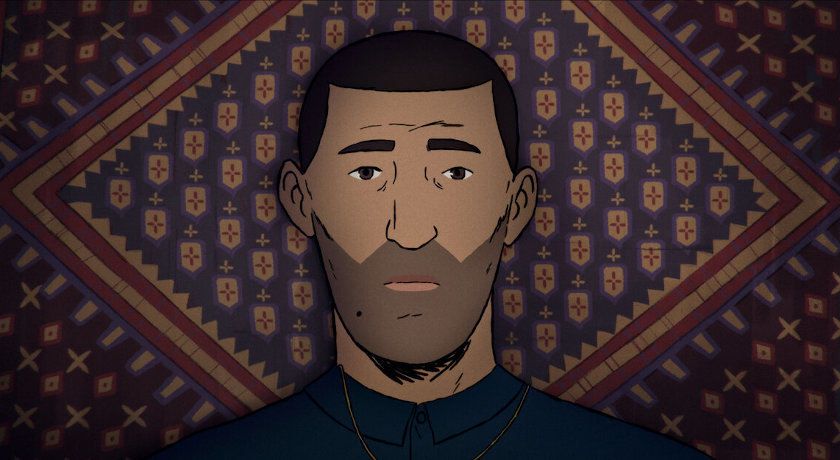 Flee
Jonas Poher Rasmussen’s powerful animated documentary centers on an Afghan man who arrives in Denmark as an unaccompanied minor. Years later, he is a successful academic and is getting married to his long-time boyfriend, but a secret from his past threatens to ruin his life forever. Riz Ahmed and Nikolaj Coster-Waldau will voice the leads in an English-language version, and serve as exec producers. The project is produced by Final Cut for Real (Denmark) and co-produced by Mer Film (Norway), Most Alice (Sweden), Sun Creature (Denmark) and Vivement Lundi! (France). 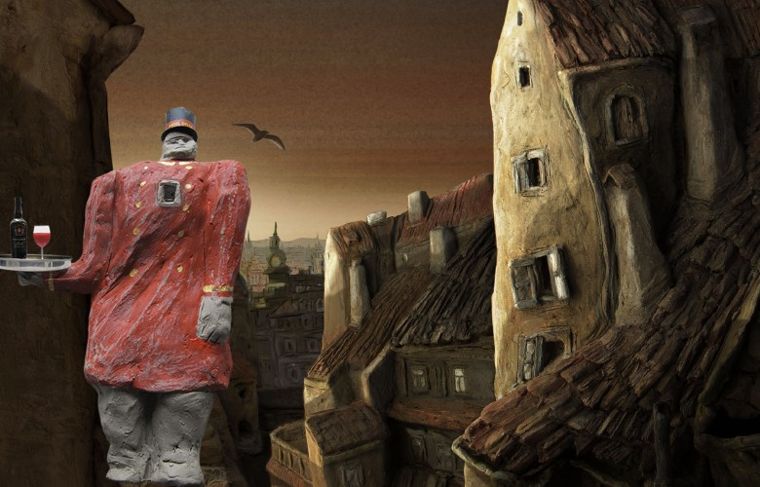 Golem
The latest work from Czech stop-motion master Jiří Barta’s (Pied Piper, Toys in the Attic) is set against the backdrop of communist Prague in the 1950s and follows the adventures of a math student who sets out on a quest to find the famous Golem and bring it back to life. Produced by Vladimir Lhoták at Czech studio Hausboot. 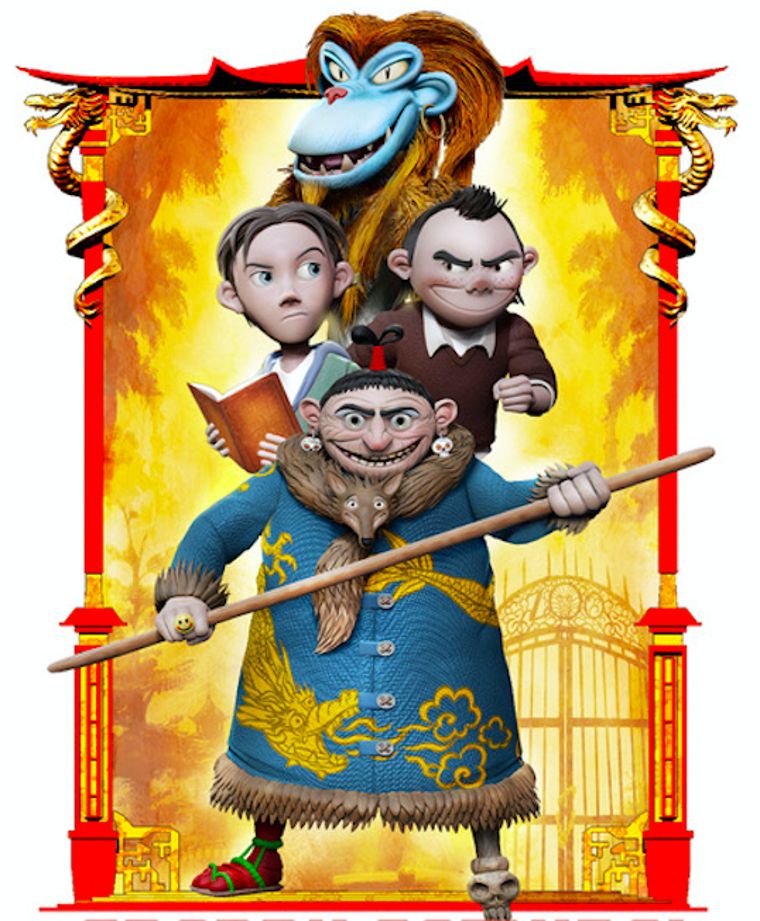 Granny Samurai – The Monkey King and I
A young schoolboy finds his life completely turned around when his neighbor Granny Samurai defends him against the school bully and then takes him on an adventure to stop a scheming Monkey King. The high-energy movie is based on the popular book by John Chambers and directed by Jesper Møller, a European animation veteran who directed Asterix and the Vikings and Sandman and the Lost Sand of Dreams and also worked on Eight Crazy Nights, All Dogs Go to Heaven, Quest for Camelot and FernGully: The Last Rainforest. Germany’s Dreamin Dolphin Film and Denmark’s Parka Pictures are producing. 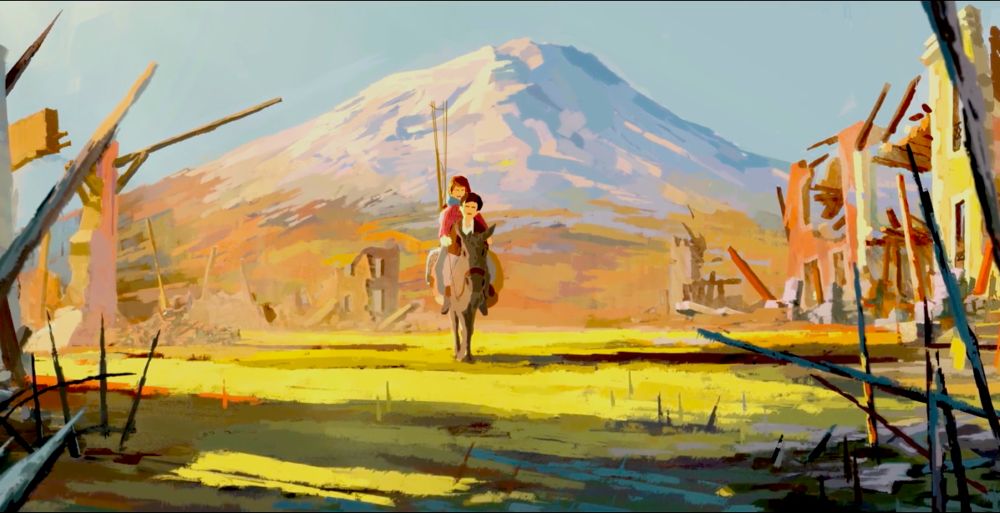 Maryam and Varto
Written and directed by Gorune Aprikian (Passade) and Alexandre Heboyan (director of Mune: Guardian of the Moon and animator on Kung Fu Panda, Monsters vs. Aliens and Azur & Asmar), this emotionally charged drama centers on two Armenian children caught up in the 1915 turmoil who are saved by a young teenage Turk and embark on an enchanted journey through Anatolia. The film has a modern-day coda as well. Produced by French outfits Tchack (Matthieu Liégeois) and Araprod (Marie-Claude Arbaudie). 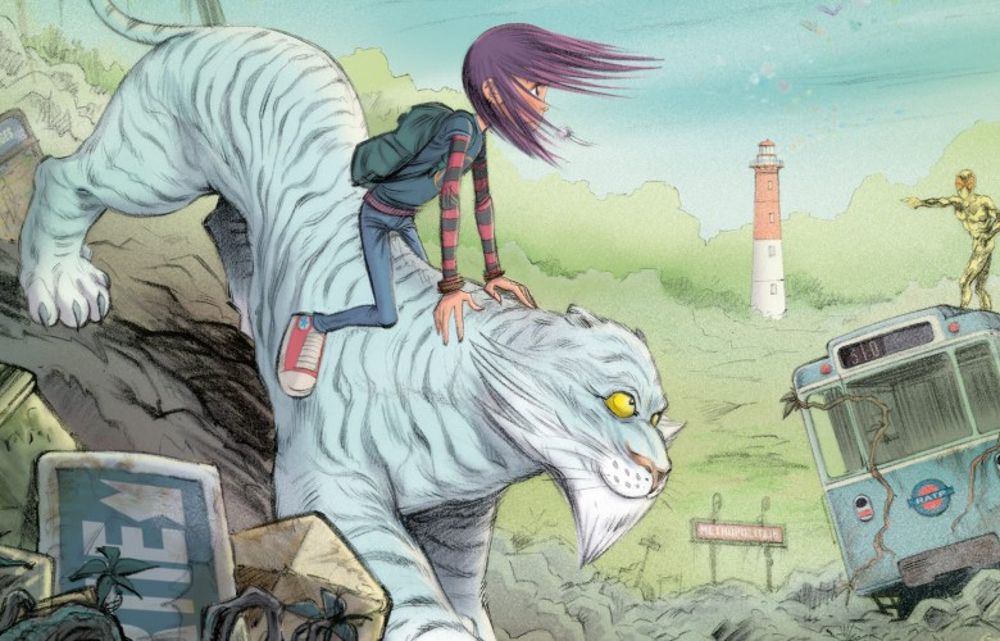 Ninn
Based on a series of original graphic novels by Jean-Michel Darlot and Johan Pilet, this ambitious feature adaptation follows the adventures of a mysterious 11-year-old girl who has a magical connection to the Paris Metro and explores the dark tunnels and abandoned stations with an origami tiger who is her protector and guide. The project is exec produced by TeamTO co-founder Corinne Kouper (Yellowbird, PJ Masks, Angelo Rules) with creative development by industry veteran Mary Bredin (Justin Time, True and the Rainbow Kingdom, Pikwik Pack). 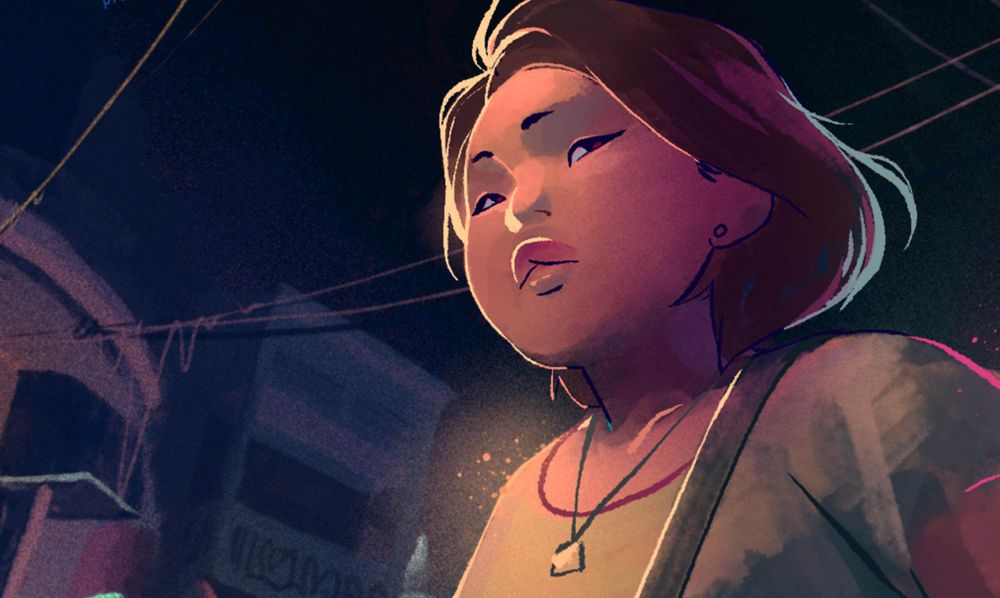 Sorya
Funan writer and director Denis Do is back with this lovely slice-of-life effort about a 17-year-old Cambodian girl who experiences the ups and downs of life in Phnom Penh as she works in a textile factory and sings karaoke at a local bar in hopes of finding stardom. The script is penned by Do, Louise Dubois and Tevy Dubray. Produced by France’s Special Touch Studios (Sébastien Onomo).

Winnipeg, Seeds of Hope
This powerful animated pic tells the story of how famed Chilean poet Pablo Noruda saved 2,200 refugees after the Spanish Civil War and brought them to Chile aboard the SS Winnipeg. The project is directed by Elio Quiroga and Beñat Beitia with a script by Laura Martel based on her own graphic novel. Produced by Dibulitoon Studio (Spain) and co-produced by El Otro Film (Chile), La Ballesta (Spain) and Midralgar (France). 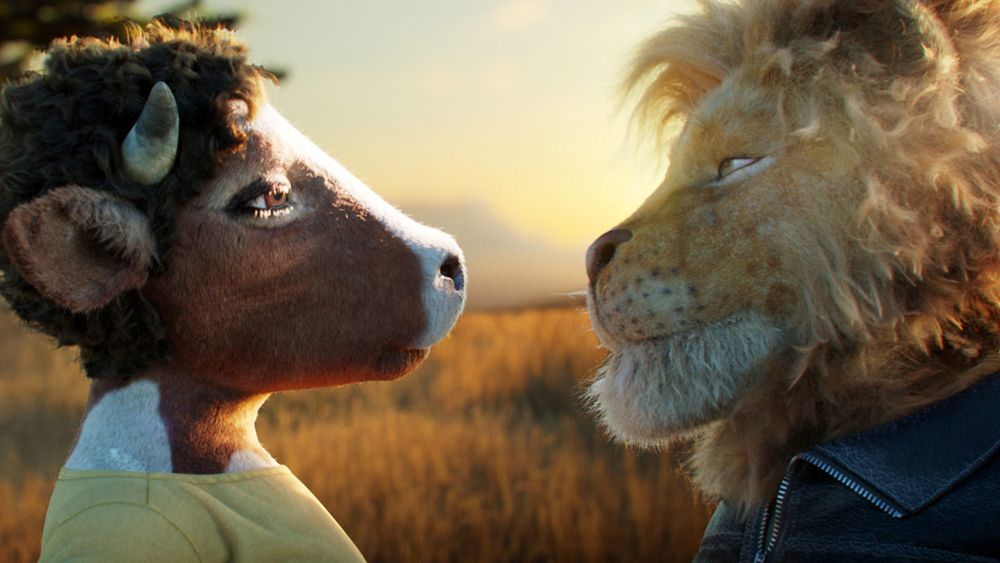 Your Spotted Skin
The forbidden love between Antonia the Cow and Kurt the Lion takes a terrible turn when a sheep goes missing and suspicion falls on the carnivore lion in this 2D-animated feature directed by Deniel Nocke, Stefan Krohmer and Thomas Meyer-Hermann. Nocke is the German writer-director behind acclaimed shorts No Room for Gerold and The Modern Cyclops. Produced by Germany’s Studio Film Bilder and Raumkapsel, Schmidt & Stein-Schomburg.