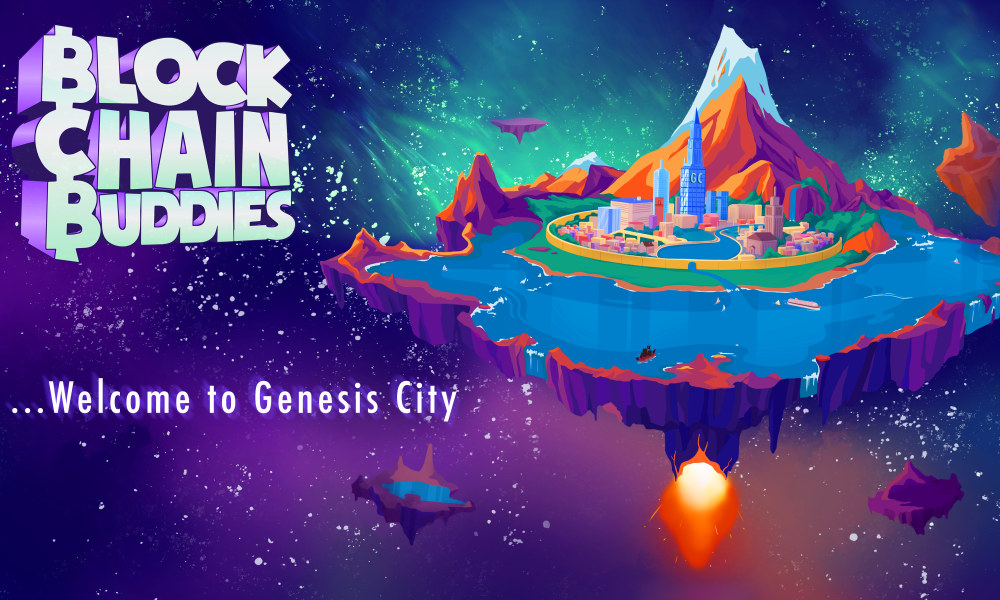 Confidential Creative has partnered with NC Labs to produce an animated NFT project called Blockchain Buddies, the first in a line of original intellectual properties under a soon to be announced decentralized entertainment studio. The project is billed as a first of its kind interactive animated project, with NFT holding community members empowered to shape the future of the creative universe.

The Blockchain Buddies team has shared its first piece of concept art, showing the world of “Genesis City” where characters and other kinds of IP will live. Designed by YueTong Tsen, the piece will also be later auctioned off as a 1/1 NFT.

The project launches with a discord channel led by veteran moderator Peachy. Additional details on the project will be released on social media via Twitter @BCB_NFT and discord (https://discord.gg/A7QbDvUmtd) with an incentive structure for reveals. To start, the first Character Design illustration, done by Ashton Holmes, will be revealed as newcomers join the Blockchain Buddies Discord community. Additional reveals and updates will be forthcoming as the community grows — with giveaways, competitions, live events and more to come.

Lopes and Shulman previously created the first NFT marketplace with legal licensing and patent-pending smart contracts. Lopes is also the co-founder of LINK Agency, a TikTok-focused marketing firm that has generated over 3 billion organic impressions for its clients, while Shulman previously led go-to-market strategies for Sony PlayStation while a consultant at EY. Lopes graduated from Stanford’s MBA program and Masters in Physics Engineer from Tecnico, University of Lisbon, and Shulman has attended Columbia’s MBA program and graduated from Cornell University.

Abrantes was pursuing a PhD in Robotics and Artificial Intelligence at EPFL before switching paths to found Optimal Labs, a company on a mission to grow safer, healthier food by deploying fully autonomous indoor farms outside every city on earth. Optimal is backed by leading tech VCs, including Founders Fund, who backed companies such as SpaceX, Palantir and Square from the start. He has a Masters in Physics from Tecnico, University of Lisbon.

Liberman is an attorney and partner at The Corporate Practice based in Los Angeles. Known for his work representing A-list musical artists, he specializes in corporate and business transaction law, estate planning and employment law. Johnson is a screenwriter, animation director and experiential story creative developing slates of projects alongside talent, executives and production groups for streaming, film and interactive mediums. Johnson also operates as a Team Lead for Fiverr’s Community Growth Program, hosting events and fostering relationships between sponsors, freelancers and supporters of the Gig Economy.

Cohen and Kieffer are also known for their work with BEAR NFT, a full service NFT agency and Metavere PR and event production company they co-founded with Blake Berlinger and Joseph Schwartz. BEAR NFT spearheaded the first ever multi-artist live performance music and arts festival in Decentraland, TO THE MOON, which drew over 700 attedees in early July 2021 and featured performances and curated NFTs by Ookay, Win and Woo, Autograf, SNBRN and Fred Thurst (as Dr. Fresch). They also recently organized the premiere Decentraland Halloween party and concert, NFTS ARE DEAD, which drew over 1,000 attendees and featured a custom Hell-themed venue build and horror maze designed in conjunction with The Last Slice. BEAR NFT also handled marketing and press promotion for Banquet Labs’ noted Apollo 11-themed virtual activation in Decetraland, produced in partnership with the Aldrin Family Foundation, which featured the launch of a new spaced themed-fashion brand, including virtual wearables, by noted fashion designer Nick Graham.