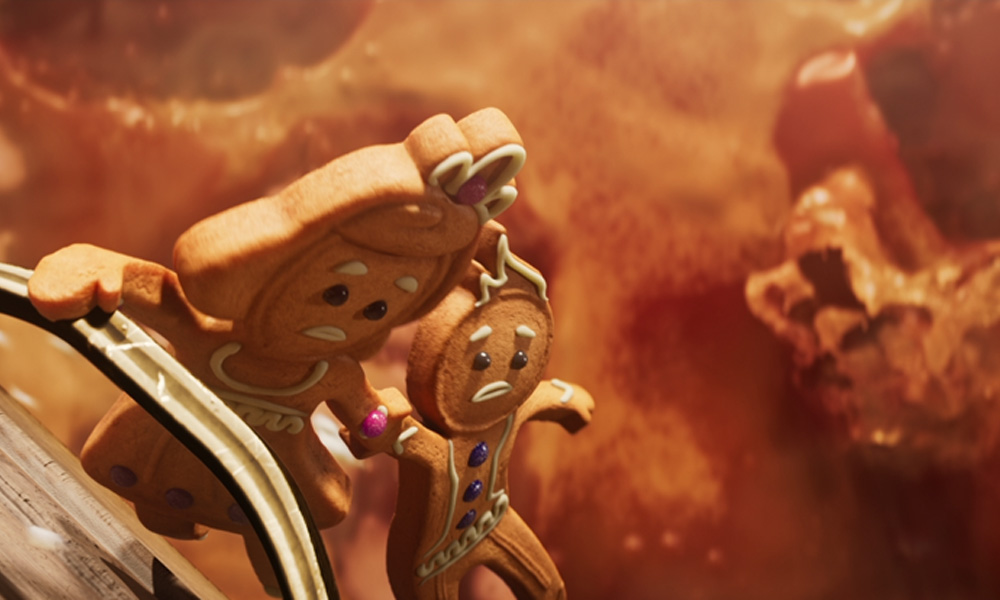 Glasgow-based Axis Studios is behind the new viral trailer for popular trading card game Magic: The Gathering — a piece of cinematic animation which flips the script on a traditional fairytale to introduce the dramatic origin story of the new Gingerbread card. The spot has racked up more than 8,4 million views on YouTube since the September 4 launch, peaking at the No. 3 trending spot worldwide 24 hours after its debut.

“The Throne of Eldraine trailer is an emotional, romantic, tragic roller-coaster ride about a gingerbread cookie,” explained Axis producer Stuart Aitken. “Axis Studios was sold on this storyboard from the beginning. We wanted to change what fans expect from a trading card game like Magic: The Gathering, introduce the latest visual technology, offer a fresh take, and continue to build on our work creating cinematics for War of the Spark.”

Centering the story on two star-crossed gingerbread cookies, Axis Studios originally set out to create a 90-second character introduction. In the end, a three-minute-long animated love story came to life.

Set in a fairy-tale castle kitchen, all hell breaks loose when fan-favorite character Garruk breaks in and begins battling the guards. The two gingerbread cookies flee for their lives, narrowly escaping the perils of breaking china, milk tsunamis, and a volcanic cauldron of boiling soup.

Magic: The Gathering launches at least four new card sets every year, with the upcoming Throne of Eldraine collection focused on fairy tales. To reflect the theme, Axis Studios set out to build a fitting aesthetic. Initial concept art was drawn of a Gothic, Flemish feast overcrowded with food. Naturalistic lighting was later added to complete the look. Throughout the trailer, iconic fairy-tale references are revealed — including poison apples, three roasted pigs, three bear heads mounted on the wall and a golden egg.

“Axis Studios wanted to create something a little different for Magic: The Gathering — something different from our typical guns-blazing, swords-clashing video game portfolio,” commented producer Nicole Anderson. “We wanted a heart-wrenching cinematic experience about what happens when fairy tales go wrong.”

Axis Studios began production by evolving the story behind a single gingerbread man card by asking: “What happened to that cookie? How did it get so deformed?” More than 25 different character concepts were created and considered before the main design was finalized. At the modelling stage, an unprecedented amount of detail went into perfecting the facial expressions of the gingerbread people, from the tiny twitches of his eyebrows to her vengeful roar.

Midway through production, the team at Axis and Wizards of the Coast realized another opportunity to provide a modern twist on fairy-tale tradition: turn the damsel in distress trope on its head. The focus shifted to the gingerbread woman as the hero of the story, fighting to avenge the consumption of her sugary paramour.

All these elements combined with high-quality CG animation bake into a recipe that hits a sweet spot for M:TG fans and newbies alike.

The Throne of Eldraine trailer was directed by Stuart Aitken and produced by Nicole Anderson, with CG supervision by Paul Rowley and Michal Skrzypiec, and art direction lead by Jake Gumbleton.