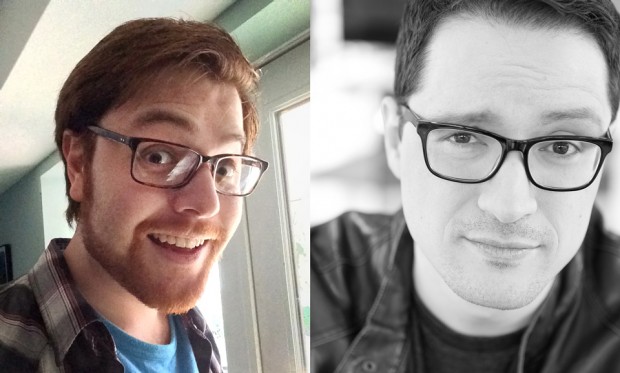 Comedy is when a bird hits a pig — and Baboons are writing for them both. Yes, Baboon Animation has just wrapped up its share of the writing on Rovio’s Angry Birds Toons seasons two and three, and is moving on to another Angry Birds project.

Boasting 4.7 billion views and counting, Angry Birds Toons is soaring. But with neither limbs nor voices, what makes the agitated avians so enduring? Two core members of Baboon’s Angry Birds team, Joe Vitale and Javier Valdez, chat with Claire Stenger about voiceless comedy and timeless characters.

What are your top rules for writing physical comedy?

Joe Vitale: Make it big, make it broad, and then try to think of something else that begins with the letter B. Oh yeah — character! Did I mention I’m a bad speller? Above all, focus on the character you’re writing for. What would they do if they were sliding down a bobsled track lined with hot dogs? A vegetarian would react much differently than a competitive eater. A character’s mindset will drive their physicality, which is why personally I think it’s funnier to have a person who’s disgusted by meat sliding down a hot dog slide. And now I’m hungry.

Javier Valdez: It’s easier to scale back than scale bigger. If a character is being launched into the sky, I’ll have him bounce off the moon. If I feel that doesn’t work right, it’s easier to come up with him hitting a blimp or something even funnier, because I already established an upper limit.

Valdez: I don’t know if I could have if I hadn’t grown up watching Homestar Runner shorts on the web. It definitely ingrained in me how the audience will accept typing without fingers or swinging a bat without arms if there’s a real strength of character. The audience is interested in what the character does with the rubber chicken he picks up, not how he picks it up.

Vitale: Well there’s a lot of jumping around, flinging, bouncing, crashing — it’s a lot like me trying to ice skate. But the trick is to know what the characters want. Then it’s a simple matter of getting them from point A to point B using any obstacles (like the lack of hands) to your advantage. Bouncing off the walls now becomes a necessity, not just a cheap stunt. All of these characters are driven by something, and they’re not going to let phantom limbs stand in their way.

What are your biggest physical comedy influences? Why?

Valdez: Definitely the classic Warner Bros. shorts. They’re great examples of having gags that work off of character. I mean, Daffy Duck and Elmer Fudd react totally differently to getting flattened by an anvil; they couldn’t be swapped out and have the same gags work.

Vitale: Personally, I’ve always admired Charlie Chaplin. Chaplin wasn’t brutish or haphazard with his physical comedy; he was elegant. The Tramp — this was a character who was at the rock bottom of society, who you might expect to be clumsy or sloppy even — but he wasn’t going to let his social standing take his dignity. Chaplin’s a great example of how physicality can define a character, and what makes us root for the underdog. As for contemporary physical comedy influences, that would have to be my mom when she sees a snake.

The Angry Birds Toons characters are all nonverbal. Any special techniques, in general, for working with characters that don’t speak?

Vitale: There are two rules that you must follow when writing nonverbal characters. First off, facial expressions are paramount. As for the second rule, I’m explaining that to you with my eyebrows.

Valdez: I think you kind of have to play charades with yourself. Can you make a sound and a face that communicates ‘Quick, grab that fire extinguisher!’ or ‘That’s no fire extinguisher, you moron!’? Now, can you do that in-character? How would King Pig communicate this idea as opposed to Terence?

Vitale: And you need to know what’s driving these facial expressions, and that’s where the character’s wants and needs come into play. If the birds see a threat to their eggs, you’ll be able to read the worry on their faces. The safety of the eggs is paramount. But if it’s a pig who sees the eggs? Their face will light up with ravenous greed, because all they want in the world is to eat them. Just like me when I’m looking at a Denny’s menu.

Tune in next issue for the second half of the interview with some of Baboon’s top bird brains!