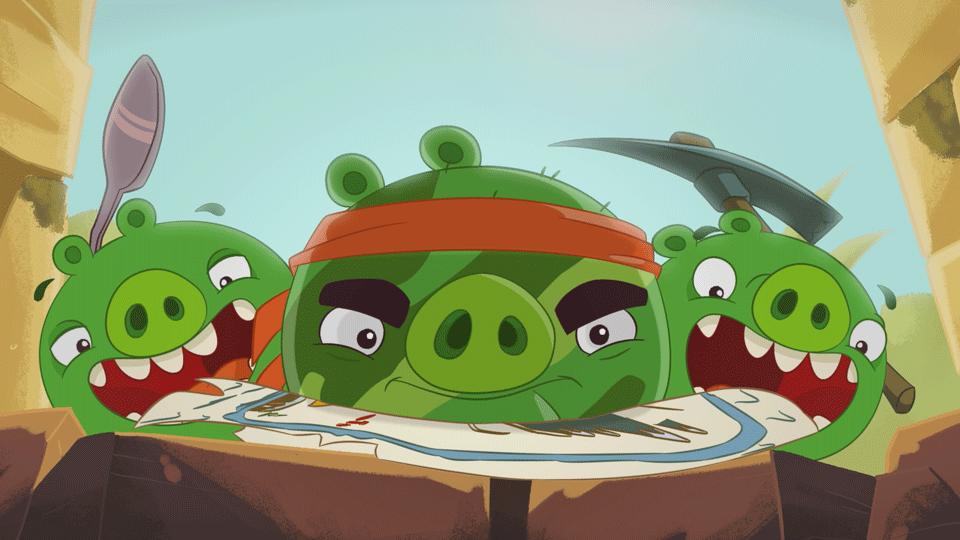 Comedy Is When A Bird Hits A Pig … Twice

Our writers explore the fine lines between slapstick, physical comedy, violence and just plain being gross.
Welcome back! Last month we asked two of Baboon Animation’s VIP Angry Birds Toons writers to chat about their craft. Now, Javier Valdez and Joe Vitale are back to discuss with our own Claire Stenger their more noble writerly techniques – including their stance on boogers, projectile desserts and, yes, cottage cheese. Read on to see how our writers use physical comedy to cook up the Angry Birds Toons hilarity you know and love!

So, guys, what exactly is “slapstick”? How is it different from physical comedy?

Javier Valdez: To me, slapstick feels like physical comedy, but actually happening to a character in a way you can feel. A birthday cake in the face leads to a plank upside the head and a spring-loaded boxing glove to the gut — the gut of not just anyone, but King Pig, when trying to break in to his rival Trump Pig’s limo.

Joe Vitale: In my mind, slapstick requires someone to get hit. An anvil falling on your head? Slapstick. Trying to move an anvil from one end of a rocking boat to another? Physical comedy. But why does a character need to move the anvil, fast, or else? Answer that and you’ll have a fun cartoon.

So who is your favorite Angry Birds Toons character?

Valdez: I have the most fun with the character of the generic pigs. They’re always willing to do anything you want. We can dress them up however we like. There’s a real likable enthusiasm about them that gives us a lot of freedom.

Vitale: I like Chuck. He’s so gosh-darned eager to impress. Also, I think, he’s kind of an idiot. This makes you feel for him — he just wants to pull off the impossible, whether he’s capable of it or not. And if he’s not? Doesn’t matter! He’ll keep on trying. That may be the idiotic part but it’s also what makes him lovable.

Talk about violence in cartoons.

Valdez: If you’ll stop hitting me. Personally, I’m a fan. It’s one of those things that best explores what animation is capable of. There’s debate about what kids absorb from cartoons, but I think, for example, casual misogyny is more dangerous for the young audience to take away than watching a character take an oak log to the face and come back swinging.

Vitale: Violence and slapstick are different. Violence is bloody. It can be copied in real life without a choreographer or outlandish props. Slapstick is, by design, ridiculous and over-the-top. That’s what makes it fun. Cartoons — at least the ones we make — are full of slapstick but very little violence. Hear that, FCC?

Vitale: That quote hits it right on the nose (speaking of slapstick). If some random guy takes a tumble? Sure, it’s a chuckle. But if it’s a spiteful character who has spent the entire episode complaining about how much he hates cottage cheese? You’ve got the perfect excuse to place him underneath the flight path of a Red Cross helicopter delivering ten metric tons of cottage cheese to a disaster area … and it just so happens the rope holding the crate of cottage cheese is no longer under warranty. And that, ladies and gentlemen, is how to mine comedy gold.

Valdez: Sympathy is a big part of it. In Angry Birds, for example, we have Matilda, our nurturing and maternal character (and so much more). It’s not fun watching things happen to her, and we have a lot more fun when she’s in command and kicking butt. But King Pig, who to me is sort of a spoiled glutton, is a riot to have things happen to, and we can’t wait to see what ridiculously terrible thing will befall him next.

What’s your stance on gross-out material? Boogers: Too gross? Not gross enough?

Valdez: Feels dated, like, say, nineties Nickelodeon. Of course, when I do want to use gross-out humor, I say go big or go home! Saying “boogers” isn’t funny, but falling into a swimming pool of them? Magic.

Vitale: Personally, I try to stay away from bathroom humor, not because it’s gross but because it’s lazy. It’s a cheap laugh. I like my laughs to be expensive and paid for in installments.

Next issue: To save him, they had to shave him — Baboon’s new A Boy and His Dude short, now airing on Nick.com.

Baboon Animation is a U.S.-based collective of Oscar-nominated, multi-Emmy winning animation writers with credits on dozens of the most iconic animated shows worldwide.

Silent But Funny
Ask a Baboon Ask A Baboon – Issue #253