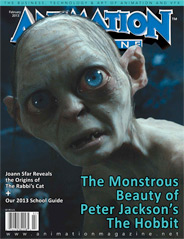 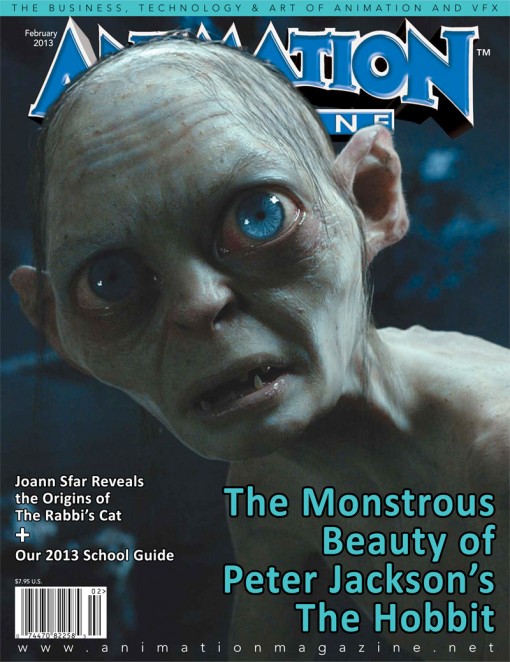 Gollum, You Never Looked Better!
The Hobbit‘s vfx supervisor Joe Letteri talks about the vfx challenges of returning to J.R.R. Tolkien’s world nine years after the last Lord of the Rings movie cast its spell in theaters.

Drawn from Memory
Prolific French comic-book artist and film director Joann Sfar discusses the real-life inspirations behind The Rabbi’s Cat and his love for American classics.

Oscar 2013: The Final Shorts Countdown
Our guide to the 10 diverse and divine animated shorts that made the Oscar nominations shortlist.

Oscars 2013: All the Pretty Digital Pictures
A look at this year’s visual effects Oscar contenders heading for the Bake Off.

Short and Sweet
How the Simpsons team brought their littlest star to the big screen with Maggie Simpson in “The Longest Daycare”.

Triggerfish Swims with the Majors
The South African studio ups the ante in 2013 with Zambezia and Khumba, two new CG-animated features that have generated great buzz globally.

2013 School Guide
Information on schools offering animation, vfx and game programs plus tips on increasing your career potential, our must-read book list and a guide to classes taught by working animators and vfx artists.