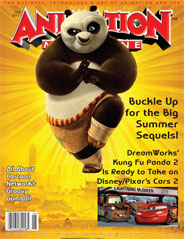 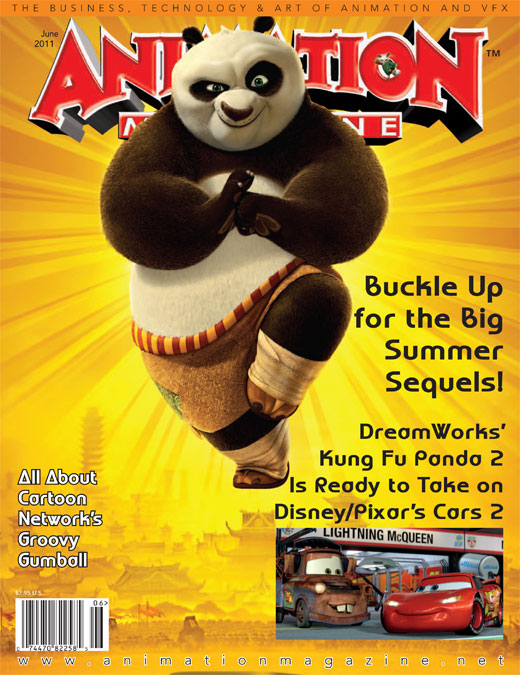 Mr. Lasseter’s Wild Ride.
John Lasseter and his A-Team at Pixar up the ante for Lightning McQueen, Mater and the rest of their four-wheeled buddies in this summer’s highly anticipated sequel, Cars 2.

Return of the Kung Fu Beast from the East.
Director Jennifer Yuh Nelson reveals how DreamWorks brought back Po and the Furious Five for a 3-D rematch in Kung Fu Panda 2.

A Superbe Year for French Animation.
A record number of top-notch animated movies are slated to be released in France. Is it just coincidence or a sign of things to come?

Gumball Begins Reign of Color.
Cartoon Network Europe’s hot new series serves up the adventures of an animated sitcom family with amazing verve and visual pizzazz in The Amazing World of Gumball.

Seeing the (Green) Light.
Sony Imageworks vfx supervisor Jim Berney and his team revisit the classic comic book and use real-world references to construct the luminous world of Green Lantern.

Capturing the Wave of the Future.
A peek at the fascinating motion-capture class offered by CalArts’ Experimental Animation program.

2011 Upcoming Animated Movie Dossier.
Our annual run-down of the much buzzed-about animation titles you can expect to see in theaters in the next couple of years.

You may also like...
Related Topics:2011, Animation, Highlights, June, Magazine