A heartwarming and touching story of a newfound family set against the backdrop of the post-Tohoku natural disaster,  The House of the Lost on the Cape  is a captivating anime movie centered around special kinship, tradition, optimism, and childhood wonder with a touch of magic.

Available for the first time in North America, the home release of The House of the Lost on the Cape contains an exciting movie presentation (featuring both versions; English dub and Japanese audio with English subtitles), insightful bonus content and an exclusive art booklet.

The House of the Lost on the Cape is available for preorder now at ShoutFactory.com and will be available in stores and through other fine retailers. 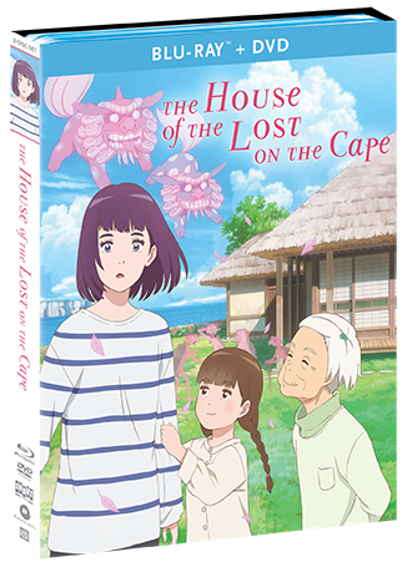 Based on the award-winning Japanese novel by Sachiko Kashiwaba (The Wonderland, The Marvelous Village Veiled in Mist), The House of the Lost on the Cape is directed by Shinya Kawatsura (Non Non Biyori, Kokoro Connect) and produced by David Production (Jojo’s Bizarre Adventure series, Cells At Work) with a screenplay by Reiko Yoshida (A Silent Voice, Lu Over the Wall, Violet Evergarden).

Synopsis: The House of the Lost on the Cape follows 17-year-old run-away Yui and eight-year-old Hiyori, who lost her family and her voice. They have no place to go when they run into Kiwa, a strange old lady. She offers them a place to stay in a slightly banged-up old house overlooking the sea, a Mayoiga. Despite joining Kiwa on a whim, the two girls find comfort in Mayoiga, a legendary house, said to look after lost travelers, and the warm hospitality of Kiwa. Both girls’ damaged hearts begin to heal little by little. Until one day, a variety of strange beings which Kiwa calls “Fushigitto” begin popping up around the house.