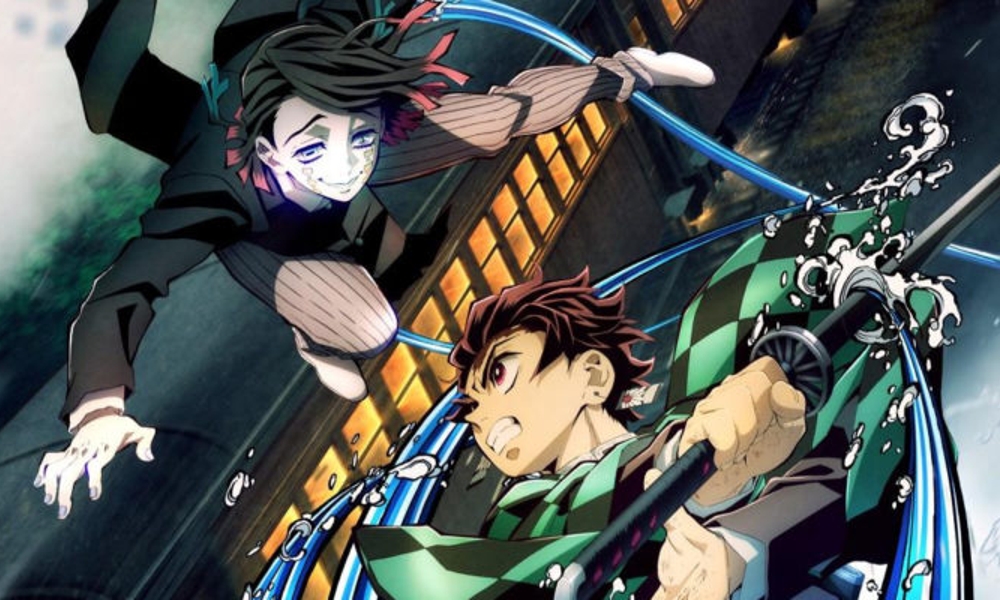 ***This article originally appeared in the February ’21 issue of Animation Magazine (No. 307) and has been updated with current box office and release information***

Given its phenomenal success in Asia and Europe, the anime epic Demon Slayer the Movie: Mugen Train (a.k.a. Gekijō-ban Kimetsu no Yaiba: Mugen Ressha-Hen) might persuade one to believe that mugen is the Japanese for “gravy” (purely for the record, mugen means “infinite”). At last arriving in North American theaters through Funimation Films and Aniplex of America this Friday, April 23, the feature film has racked up an incredible series of box office records since its October release in Japan. In its first 10 days, Demon Slayer the Movie: Mugen Train took in $100 million, making it the fastest film ever to reach that milestone. 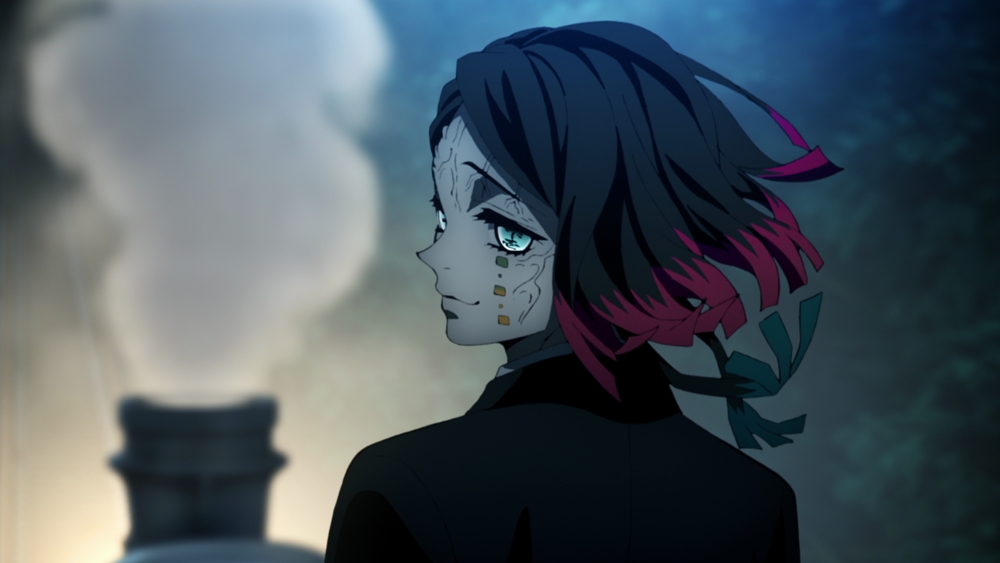 While the filmmakers behind Mugen Train seem to make a point of not talking about their work, no less a figure than Miyazaki himself has weighed in on the prospect of his losing the top place in the record books … with characteristic calm. “I don’t think it has anything to do with me,” Miyazaki said recently. “As long as the workplace they make is peaceful, and they’re doing their best, that’s all that matters.”

The workplace at the Tokyo-based anime studio ufotable, which produced the film, may be peaceful, but the predicament of the characters in Mugen Train is anything but. The film is a direct follow-up to the television series Demon Slayer: Kimetsu no Yaiba, which began airing in Japan in April 2019. That, in turn, drew its inspiration from the hugely popular manga by Koyoharu Gotōge. The show’s director Haruo Sotozaki, who also served as a key animator for several episodes, helmed the feature as well, working from a story credited to Gotōge and a screenplay attributed to ufotable (that’s one way to maintain credit parity). As was its source material (the film being an expansion of the “Mugen Train Arc” of the manga), the film is set in the early 20th century, during the reign of Emperor Taishō, who briefly installed a post-World War I democratic system of government for the nation. 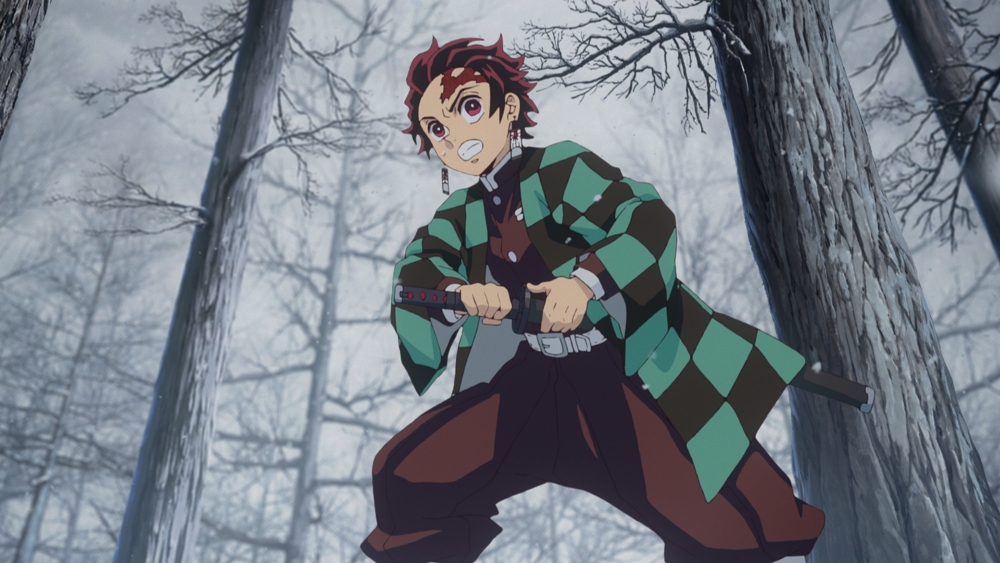 The central character is a young man named Tanjiro Kamado, whose bravery was tested as an even younger man through saving his younger brother from a falling brazier, an incident that left Tanjiro with a pronounced red scar on his forehead. Tanjiro labors to support his family, only to return home one day and discover that everyone except his younger sister, Nezuko, was  viciously slaughtered by demons. Even though Nezuko’s life was spared, she was transformed into a demon (albeit a rather benign one), which prompts Tanjiro to join the ranks of Demon Slayers to avenge his family and find a cure for Nezuko’s affliction.

With its large and complex cast of demons and demon slayers, and multiple levels of combat, the shonen saga overall might be compared to the uninitiated as a young adult elevation of Pokémon. The primary antagonist of Mugen Train is Emmu, a sadistic lower-rank demon who will achieve upper-rank status if he kills Tanjiro. Meanwhile, Tanjiro and two other members of the Demon Slayer Corps (a civilian special ops unit dedicated to protecting humanity from vicious demons) join up with Kyojuro Rengoku, the Flame Hashira, who is one of the most powerful swordmasters in the human realm, on board a seemingly endless, demon-haunted train. Once there, they are drawn into the mystery of the disappearances of several people on the “infinity” train. 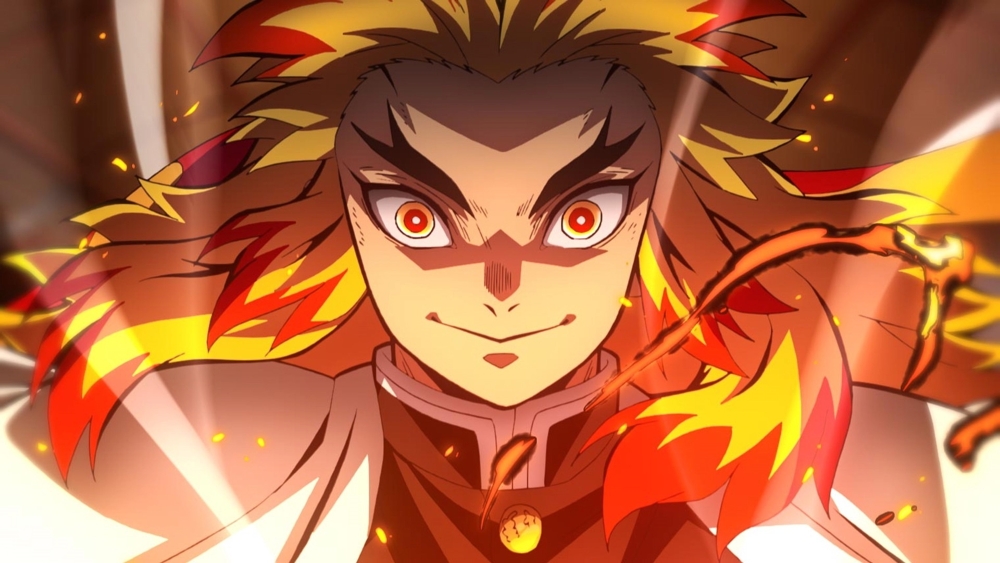 While the film is mostly traditionally animated — Akira Matsushima served as chief animation director as well as character designer, though the animators are again represented simply under the banner of “ufotable” — the train itself is sleekly rendered in 3D. Digital effects were also used for the big-screen renderings of the franchise’s trademark flashing sword fight scenes, with the CG work supervised by Kazuki Nishiwaki.

Not surprisingly, voices for the English-language dub are provided by the American actors who played the same roles in the TV series. Zach Aguilar, who portrays Tanjiro, says he is “extremely honored to be able to be a part of such a fantastic anime.” Meanwhile, Abby Trott returns as the voice of his sister, Nezuko, who, despite having been rendered demonic, still retains some basic humanity. “Nezuko as a human is a sweet, caring sister, and even when a demon, when it comes to Tanjiro, she must protect,” Trott says. “I definitely relate to her sentiments about protecting the people and pets I hold dear.” 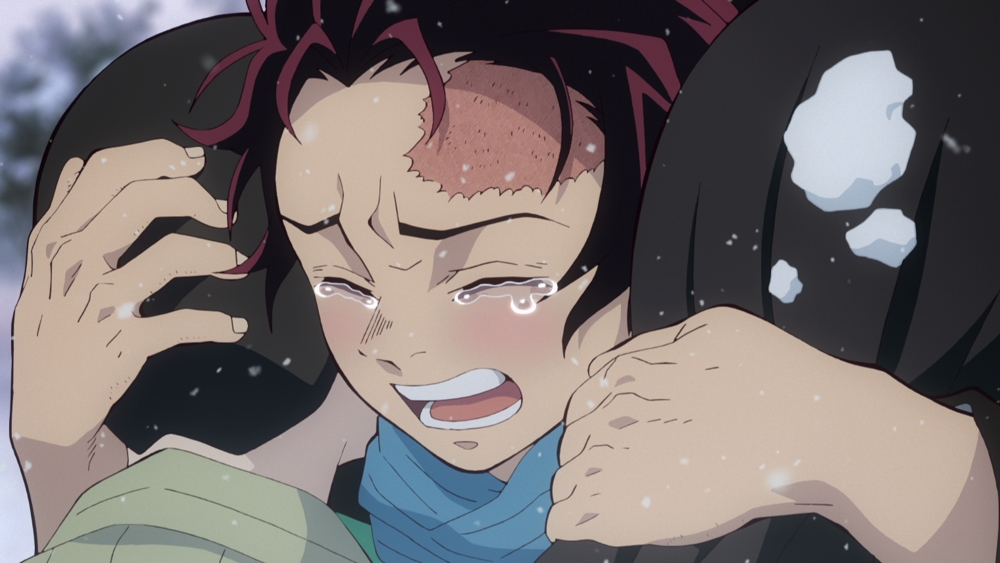 Bitter Coffee to the Rescue

To play the role of the fierce demon slayer Inosuke Hashibara, who fights with a hollowed-out boar’s head as a mask, voice actor Bryce Papenbrook developed a unique approach for achieving the character’s harsh, gravelly voice. “My technique to make my voice sound so deep is to literally drink the worst coffee possible — the darkest, strongest-brewed coffee, where you take a sip and go … oh, no …,” he revealed to a crowd at last year’s Katsucon in Washington, D.C. “Before every line I take a sip of the coffee and then under the beeps [a cueing system that preps the actors for a take] I amp myself up and say the line. I have to get to that point for every single line.”

J-Pop star LiSA has provided the picture’s theme song, titled “Homura,” the lyrics for which were co-written by the film’s music score composer, Yuki Kajiura. “Homura” set a record of its own by achieving 10 million views in its first week on YouTube. This is not the singer/songwriter’s first brush with Demon Slayer; her hit song “Gurenge” became even more popular as the theme song for the series Kimetsu yo Naiba, surpassing the million-download mark, the first such achievement in Japan for a female artist. 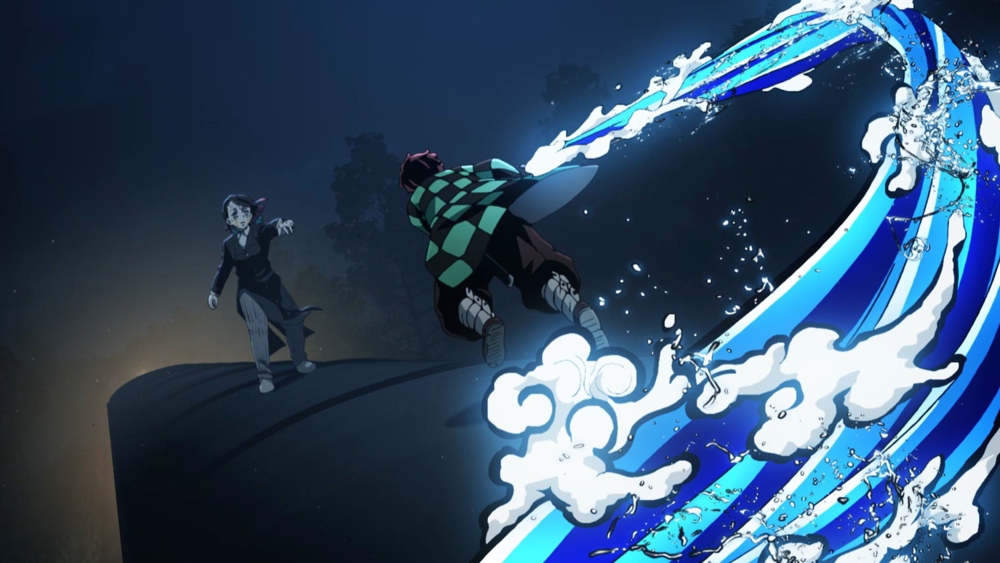 The franchise in general, and Mugen Train in particular, is a singular success for the 20-year-old ufotable studio, which had already scored big with such earlier manga-based projects as the 2011 series Fate/Zero, 2015’s God Eater and lighter shows such as 2003’s Dokkoida?! and 2004’s Ninja Nonsense. Targeting mainly the shonen audience (male tweens and teens) ufotable animation has become known for its execution of intensely choreographed, highly cinematic battle and fight scenes. While available in English dubbed versions, those hits did not quite make the trans-oceanic splash of Demon Slayer (the income from which, incidentally, helped offset the studio’s recent income tax problems … as if 2020 wasn’t already bad enough).

Given the plethora of anime films arriving in 2021, it is an open question as to whether Demon Slayer the Movie: Mugen Train will break North American box-office records as well. However, chances are many more fans all over the world will be hitching a ride on this train.

Demon Slayer the Movie: Mugen Train arrives in North American theaters Friday, April 23 through Funimation Films and Aniplex of America. Tickets and participating theaters can be found at FunimationFilms.com.