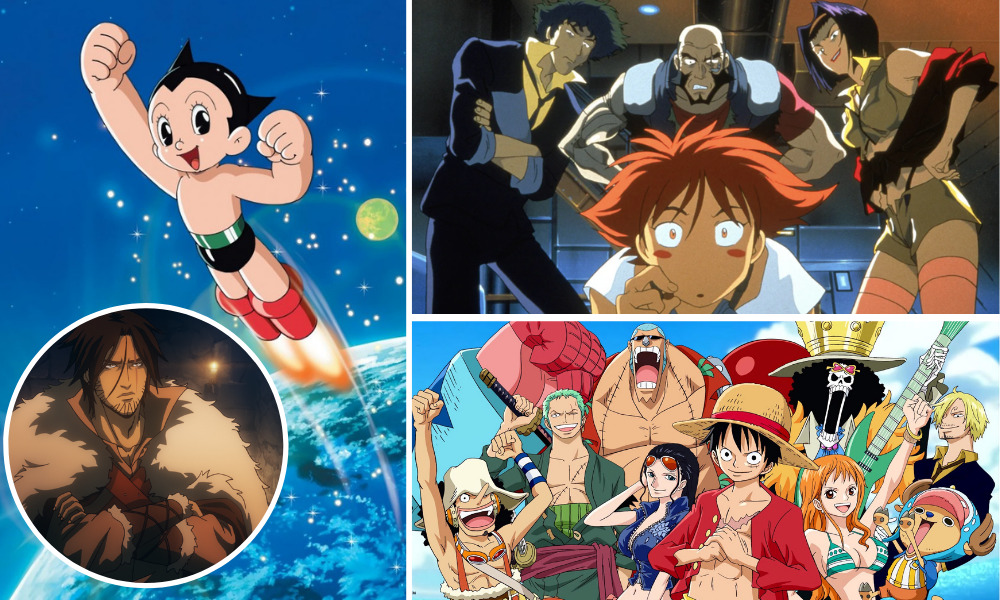 Astro Boy, Cowboy Bebop and One Piece are all popular examples of Japanese anime, while Castlevania (inset) was developed in the U.S.

“Words… [are] innocent, neutral, precise, standing for this, describing that, meaning the other, so if you look after them you can build bridges across incomprehension and chaos. But when they get their corners knocked off, they’re no good anymore…”

One word that seems in serious danger of having its corners knocked off these days is “anime.” In Japanese, the word is writtenアニメ (ah-nee-may) in katakana, the syllabary used for foreign words (much the way English speakers employ italics). It means animation or animated film — hand-drawn, stop-motion or CG. The “anime” section of a store in the Akihabara district of Tokyo might offer Lilo & Stitch, How to Train Your Dragon, Wallace & Gromit and The Simpsons as well as My Hero Academia, Naruto and Sailor Moon.

In the 1970s, Japanese animated films were often referred to as “Japanimation” in the West, but during the mid-1980s, fans in the U.S. and other countries began using anime as part of a growing vocabulary of borrowed words that includes otaku, yaoi, mecha et al. As the fan base and influence of Japanese animation grew over the next three decades, anime became the term of choice in conversations, publications, etc.

Surprisingly, some mainstream journalists still use the term “Japanese anime,” which is as redundant as “French champagne.” All authentic champagne comes from France, and all real anime comes from Japan. The name “champagne” is legally protected under a treaty signed in 1891 and by subsequent international agreements. But Japan hasn’t fought to protect the word “anime” the way other countries worked to insure the legitimacy of products sold as “Roquefort” or “Parmesan.”

In the last few years, anime has been used to describe features and TV series that were made in China, Korea or the United States with little or no Japanese input. Some of these films are action-adventures that offer more battles and violence than their American counterparts. Japanese artists aren’t bound by the American shibboleth that animation is restricted to “family” entertainment. If the story demands the hero slay the villain, a sword swings and a head goes flying. Japanese villains don’t fall to their doom from great heights, avoiding a graphic demise and leaving the hero with unsoiled hands. For some viewers, anime has become synonymous with hard-hitting action.

It’s not clear whether the trend of using anime to promote non-Japanese films stems from confusion about the accepted meaning of the term or whether it’s a cynical attempt to lure viewers in key younger demographics to a new property. Before the pandemic, there were anime cons every weekend in various North American cities, and most universities in the U.S. — and many high schools — have anime fan clubs, which often rank among the most popular organizations on campus.

Given the flood of animated production in recent years, studios and distributors are desperate to call attention to their offerings. And the lines can grow fuzzy as Netflix and other major streaming services sign deals with Japanese artists to produce content. (Not to mention Speed Racer, Ghost in the Shell and other dismal attempts to transmute Japanese animation into Hollywood live action.)

Despite the boom in production, American animation can’t match the extraordinary diversity of Japanese animation, which may contribute to the confusion over the real meaning of “anime.” There have been more than 4,500 features, TV series and OVAs produced since Osamu Tezuka’s Astro Boy ushered in the modern era of animation in Japan in 1963. The word “anime” encompasses that extraordinary range of production, from the dark adventures of Cowboy Bebop and Fullmetal Alchemist to the rollicking silliness of School Rumble and Martian Successor Nadesico; from the charming girls’ series Card Captor Sakura and Azumanga Daioh to the dystopian worlds of Akira, Ghost in the Shell and Neon Genesis Evangelion.

In recent years, it’s become increasingly difficult to define what is and isn’t an animated film. At a certain point, animators and animation viewers begin to feel like Alice, when she told Humpty Dumpty, “The question is whether you can make words mean so many different things.” But for all its diversity, “anime” refers to animated work made in Japan, regardless of the genre or medium. And if a film wasn’t made in Japan by Japanese artists, it’s either inaccurate or deceptive to present it as anime.

This article was written for the February ’22 issue of Animation Magazine (No. 317).

Charles Solomon’s upcoming book The Man Who Leapt through Film: The Art of Mamoru Hosoda will be published this year by Abrams.