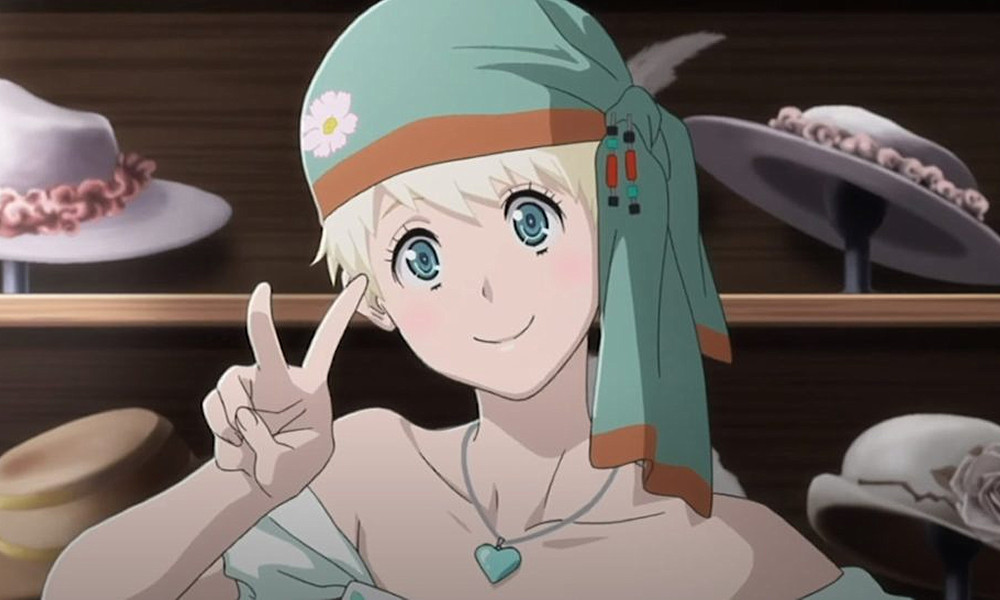 No bones about it: Anime has rocketed from a niche fandom outside Japan’s borders to a major global facet of the toon industry since the days of fan-subbed VHS tapes trading hands at your schoolyard otaku club. One of the latest international collaborations to hit screens, Fena: Pirate Princess — a Crunchyroll and Adult Swim Original series produced at acclaimed Tokyo studio Production I.G — combines seafaring scuffles with classic shoujo inspirations to create a unique animated treasure.

Fena Houtman remembers little about her childhood. Orphaned and raised as a servant in a brothel, her life changes when she escapes to an island of pirates where she discovers the truth behind her family. With Fena being the only one able to unlock her family’s secrets, and a formidable crew of female pirates on her tail, she must take her place as captain of her Samurai crew for a high seas adventure!

Animation Magazine got a special look at some of the character design artwork for Fena this week, and creator/director Kazuto Nakazawa — whose character design and chief animation director credits span El-Hazard, Tenchi in Tokyo, Samurai Champloo, B: The Beginning ,Genius Party Beyond – Moondrive, the anime sequence in Kill Bill: Volume 1 and Linkin Park’s “Breaking the Habit” music video, to name a few — was kind enough to answer some of our questions about the creative sparks behind the show. 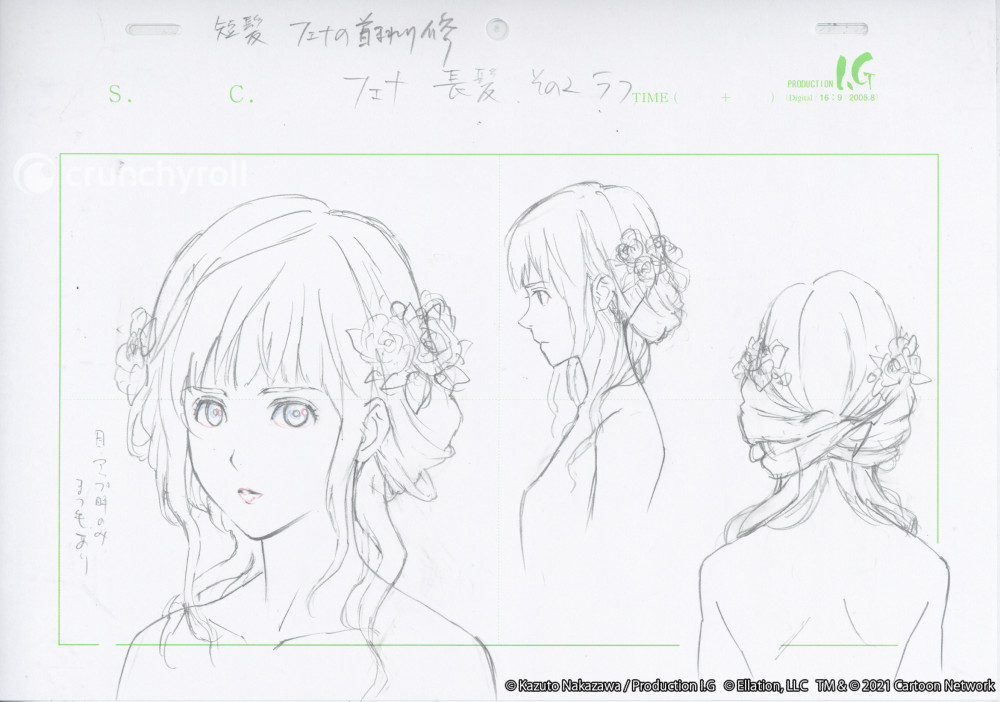 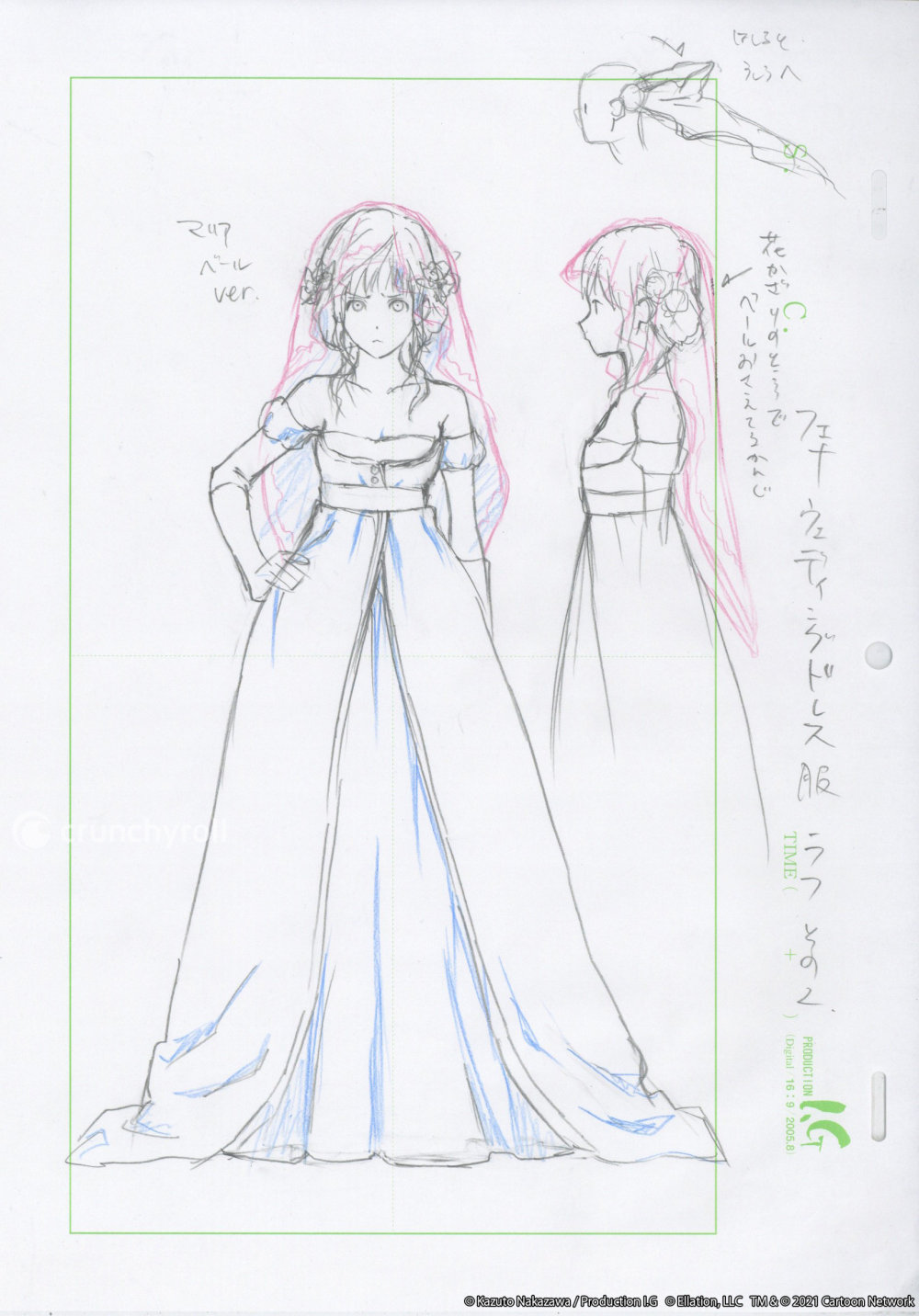 Animation Magazine: What were some of the visual inspirations for the series?

Kazuto Nakazawa: I pictured a fantasy world of bright colors instead of the dark world. The motif is the 18th century, but I tried to create a fantasy space as much as possible. I was careful not to go in a realistic direction.

What were the main elements of the show’s design as it was developed?

The previous work, B: The Beginning Season 1 (I wasn’t involved in the second season) had ‘black’ as the main image of the story and world, so I simply did this one with the opposite: ‘white.’ The color ‘black’ for B: The Beginning was inspired by the black dyeing technique in Kyoto. The color ‘white’ for Fena: Pirate Princess was inspired by the glistening white dyeing technique used in Toka-machi, Niigata. The traditional technique is done by exposing the fabric to snow and bleaching it with ultraviolet rays. I did the original design, but I think that Yasuko Takahashi’s arrangement made it more gorgeous and soft.

What is a detail of Fena’s character design that reflects who she is?

The color of Fena’s pupils, which I was inspired by the color of the Paraiba Tourmaline gem. It symbolizes purity and innocence. 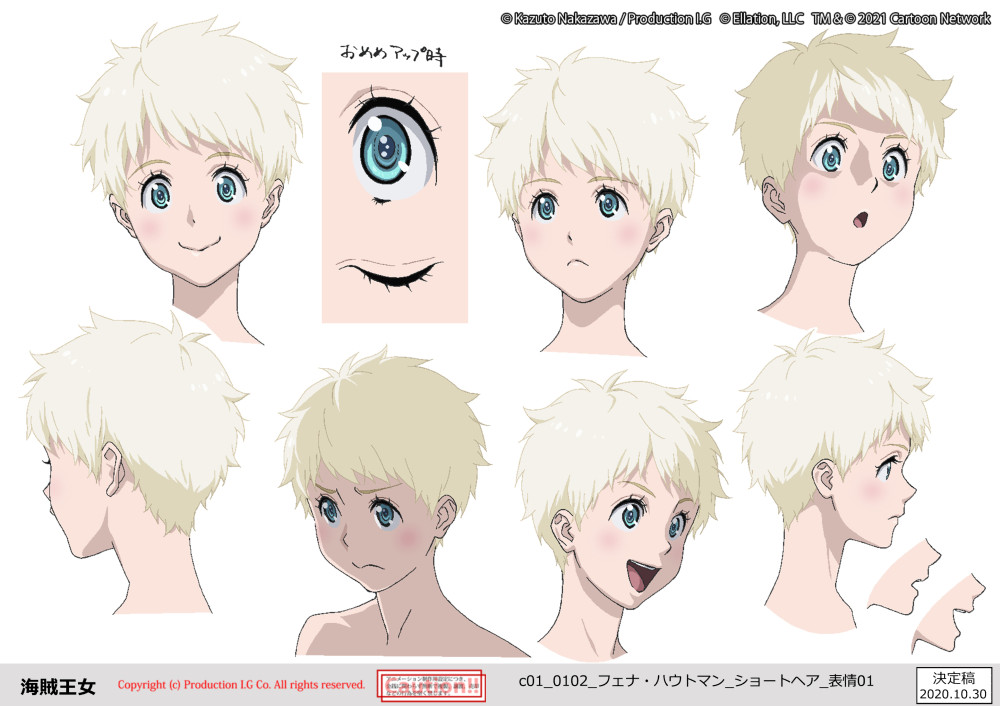 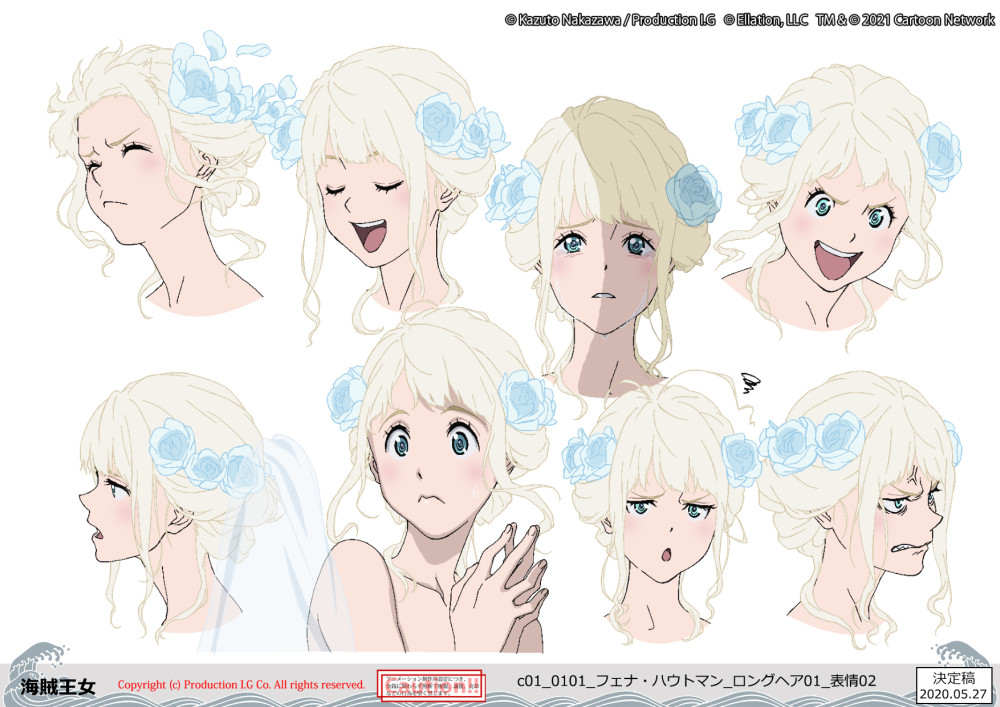 How does Fena: Pirate Princess stand out from other anime available today?

I wanted to try the very traditional production style from over three decades ago. We normally record voices to animation, but for Fena: Pirate Princess we pre-recorded the voices and had them perform before the animation was made. We practically drew everything and didn’t use any 3D animations, which is very rare nowadays. I did all the storyboarding myself, and all of the key parts of the animation were handled by myself, Tetsuya Takahashi, Saki Fujii and Yasuko Takahashi. The workload was so massive and heavy to divide between us four people, and we were all exhausted mentally and physically — however, we pulled it through because of our great teamwork and trust in each other.

What is your favorite character, story or artistic achievement of the show?

I designed all the characters and did the key animation by myself when we made the very first PV. I asked Yasuko Takahashi to supervise the key animation of Fena and all samurais, as well as the arrangement of the characters and retakes, which allowed me to handle Otto, Salman and O’Malley myself, which is probably the reason I feel strong attachment to all the characters we created at the development stage. In terms of my favorite episodes, it would be 1, 2, 4 and 7. I enjoyed the love romance scenes within the fantasy world. 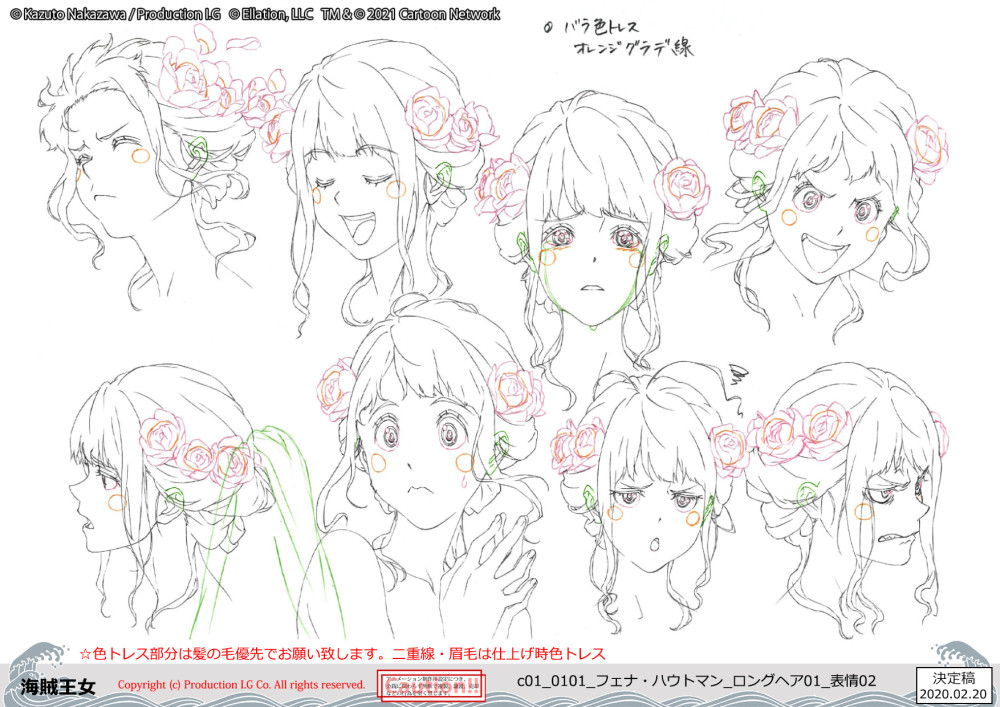 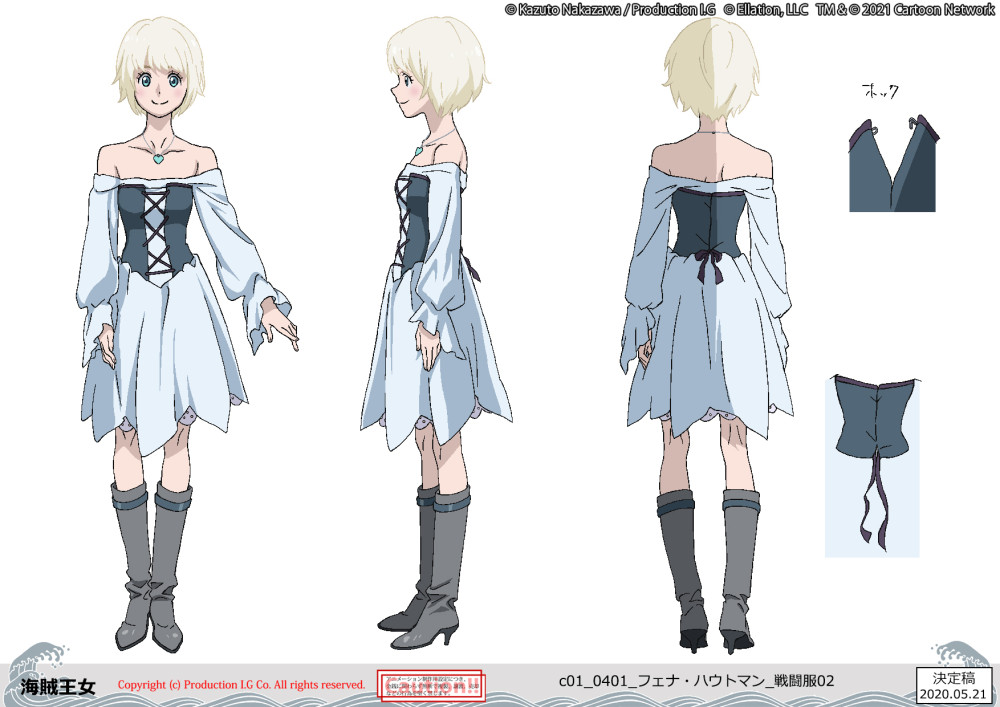 What was the biggest challenge of producing this project?

It would definitely be the amount of workload. Production halted for over three months because of the pandemic, and it took three additional months to put production back on track. The amount of work was insane while the time was limited. But we didn’t want to cut corners, so we did everything we could to bring the best quality animation to all you fans.

Episode 7, especially, was one where I had to redo more than half of the animation myself. The rest of the episodes weren’t as challenging because I had help from Tetsuya Takahashi and Fujii, who checked all the scenes in just one week! Having them and their contribution to the show were the biggest asset. I feel fortunate to have them in the team.

New episodes of Fena: Pirate Princess air every Saturday. Fans can catch the series subtitled on Crunchyroll and dubbed on Adult Swim.