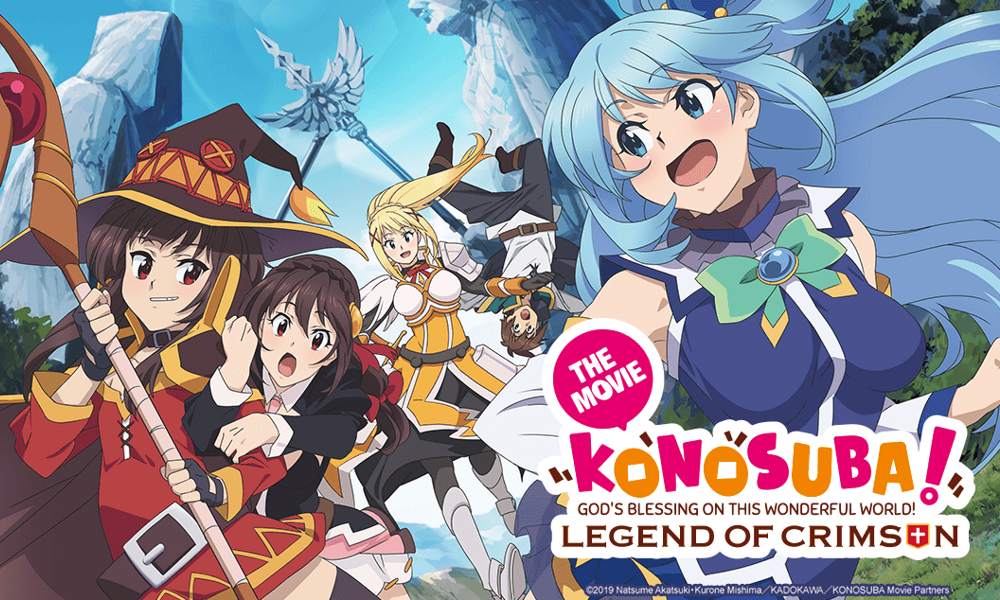 KONOSUBA -God's blessing on this wonderful world!- Legend of Crimson

Leading international anime platform Crunchyroll will soon add comedy-adventure movie KONOSUBA -God’s blessing on this wonderful world!- Legend of Crimson to its streaming offerings. The subtitled version of the film will premiere on Crunchyroll on March 25, while the English-dubbed version of the film will premiere this April.

Crunchyroll will also be releasing the full first season of KONOSUBA -God’s Blessing on This Wonderful World- on Blu-ray in the U.S. on May 25. The complete season one collection contains all 10 TV episodes and the OVA episode from the first season in high definition. It also includes both the subtitled and English dubbed versions of episodes.

The streaming release follows the U.S. theatrical debut of Legend of Crimson presented by Crunchyroll in September, which screened at more than 600 theaters across the country.

Video game-loving shut-in Satou Kazuma’s life should’ve ended when he was hit by a truck, but through a twist in fate, he ends up reincarnating in another world — and dragging the goddess, Aqua, along with him.

“I’m going to enjoy the life of an adventurer that I’ve always fantasized about from RPGs! Time to be the hero!”

But in spite of his enthusiasm, only trouble was waiting for Kazuma. Namely, the troublemaking goddess, Aqua; The wildly dorky mage, Megumin; and the unrelentingly delusional lady knight, Darkness. He ends up forming a party with these potentially powerful, but incredibly unfortunate individuals, which leads to deep debt, being tried for treason, slaying the Demon King’s generals, and occasionally dying (again).

Then, one day, the Crimson Demon girl Yun Yun says something that makes the entire group freeze up: “I want to have your babies, Kazuma!”

Upon hearing the details, it turns out that the Crimson Demon village that Megumin and Yunyun are from is facing a threat that could mean it’s ending. Kazuma and his gang follow Yunyun, who returns to the Crimson Demon village intent on saving it… when they are faced with their greatest threat yet! What will become of the unremarkable adventurer Kazuma’s life in another world?

You may also like...
Related Topics:Crunchyroll, featured, Konosuba - God’s blessing on this wonderful world! - Legend of Crimson
Geographic Region:Worldwide