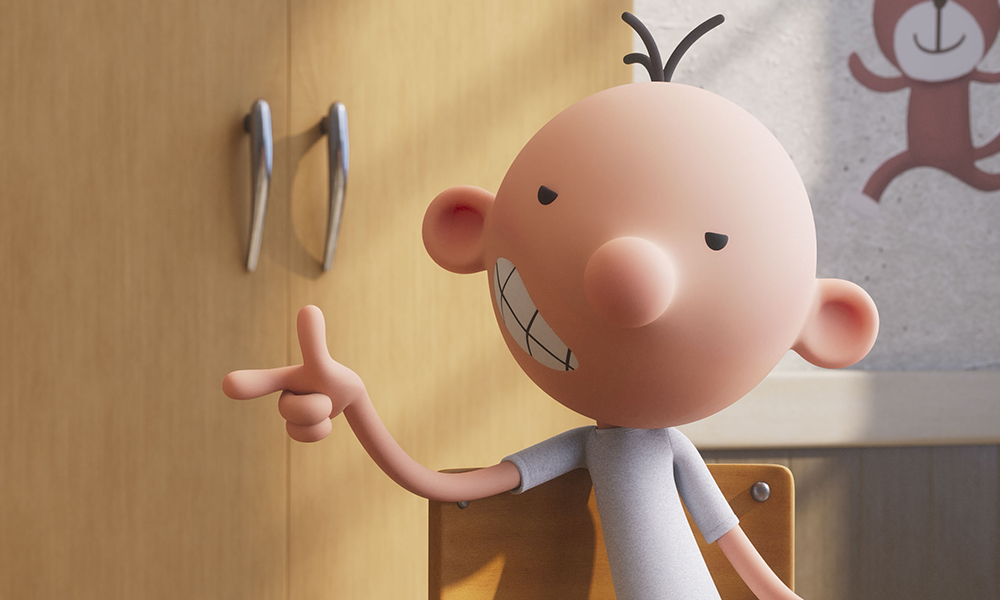 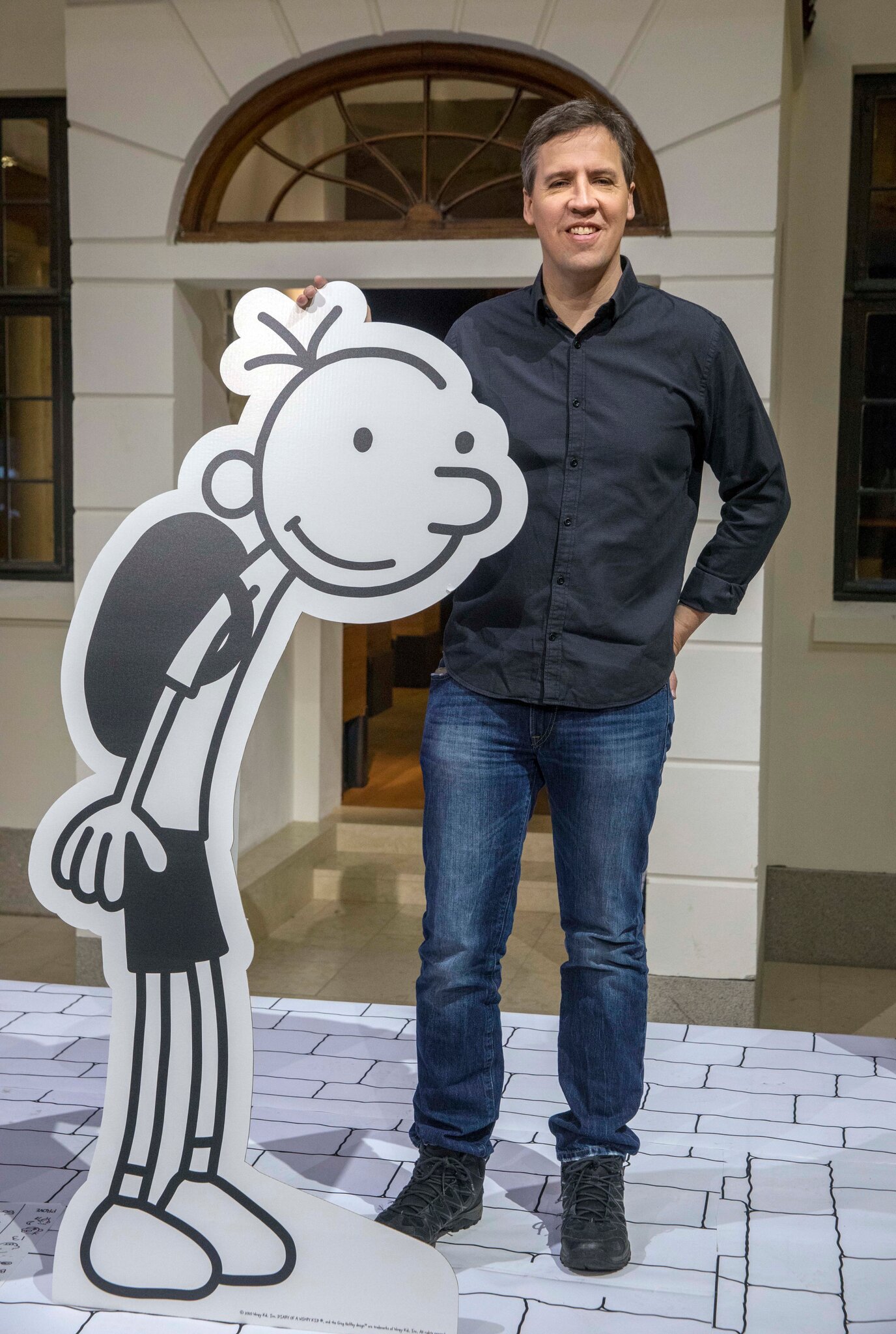 Fans of Jeff Kinney’s hugely popular book and movie series Diary of a Wimpy Kid get an early holiday gift this Friday (Dec. 3) as the new fully CG-animated adaptation of the book premieres on Disney+. The brand new movie, which is directed by Swinton Scott (Futurama) and both penned and produced by Kinney himself, follows the adventures of Greg Heffley (Brady Noon), a scrawny but ambitious kid with an active imagination and big plans to be rich and famous who has to learn to survive middle school first. This adaptation of the first volume in Kinney’s blockbuster book series also features Ethan Williams Childress (Rowley) and Chris Diamantopoulos (Frank) and marks the beginning of a new animated series of movies on Disney+. Kinney was kind enough to answer a few of our questions about his new project.

Animation Magazine: Congrats on this brand-new animated adaptation of your hugely popular book, Jeff. You must be very happy to see it premiere after a two-year development and production period?

Jeff Kinney: It’s a great moment, you know? Yeah. I never thought I’d be here working with Disney. Yet having that Magic Castle show up in the first few frames is really cool. It’s a privilege, and I really hope kids like the movie.

When you started this franchise first as an online property in 2004 (With Funbrain) and then as a printed book series (for Abrams) in 2007, did you have any idea that this property would spawn four live-action movies and now an animated feature for Disney+?

You know, I had those rock star dreams as a kid or as a teenager of wanting to have a cartoon on the comics page. That didn’t happen for me, but that was my ultimate vision. Just having a comic on the comics page. But this is so much better, so I couldn’t imagine this kind of success.

Tell us a little about working in the CG animation space and mixing it up with the 2D doodles of the main character.

I really like the style. You know, one of the things that we set out to do from the beginning is to not be a Pixar film. We weren’t trying to, you know, have you render every single hair on every character’s head? (Except for Greg, who has three hairs!]) We wanted it to feel sort of timeless, something that would age well in 10 years or so. So we were just trying to find that balance and make it feel timeless and sophisticated enough that it will age well.

Which studio produced the animation for the movie?

We worked with Bardel Entertainment in Canada. [Based in Vancouver and Kelowna, Bardel’s recent projects include The Dragon Prince, 44 Cats, Rick and Morty and Teen Titans Go!]

How did you integrate the CG animation with the simple 2D drawings created by the lead character?

We knew that we had to get the modeling right to begin with. Greg is made up of nine lines on the page. We didn’t have a lot to work with. It took a long time to actually get the modeling right because Greg looks different from every different angle, and he doesn’t look like he looks on the page all the time. When we see him from the side view, we’re not used to seeing him in a three-quarter angle. So it took a little while to get it right. But when we finally got it and I saw the whole thing rendered and fully lit, I just loved it. 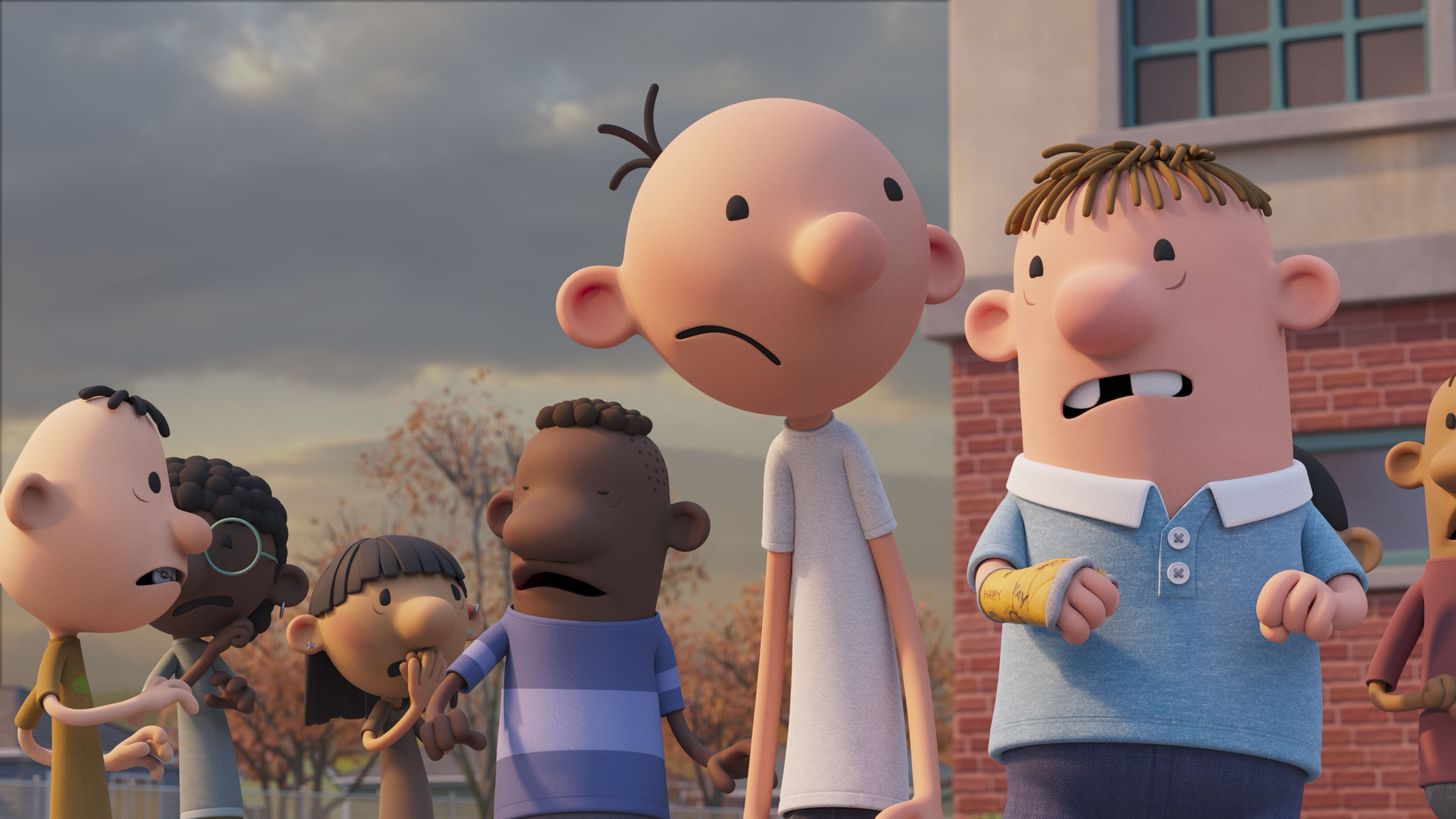 How long did it take from the time you finished the script to final delivery of the movie to Disney+?

I think about two years, so we were really taking our time. I love the fact that higher ups at Disney were taking this really seriously. They watched every cut of the movie and they gave us  notes. So, it was a really great process.

Overall, how many people do you think worked on the movie?

Gosh, it would be hundreds, hundreds of animators and artists and technical people. But the  core creative crew was really small. It was me (based in Plainville, MA) , a couple of producers, a project manager and the director of course, Swinton Scott. He’s a veteran of Futurama and The Simpsons episodes. He’s really great and really got it from the beginning as he established the template and the way that the animation flows, the way the characters move. So my hat’s really off to him.

What did you love about working in animation, which enabled you to do more with your book beyond live-action?

I think for one, it allows you to see Greg the way he appears on the page on the screen, right? That’s a really nice connection to be able to make, which in the live-action movies that the audience had to make this leap right. They saw the way Greg draws himself in and they see the actor who plays Greg. There’s a difference between the two, and we sort of have to accept that in the live-action movies. But here and in the animated films, you know, we’re really seeing Greg’s world come to life in animated form for the first time quite fully. 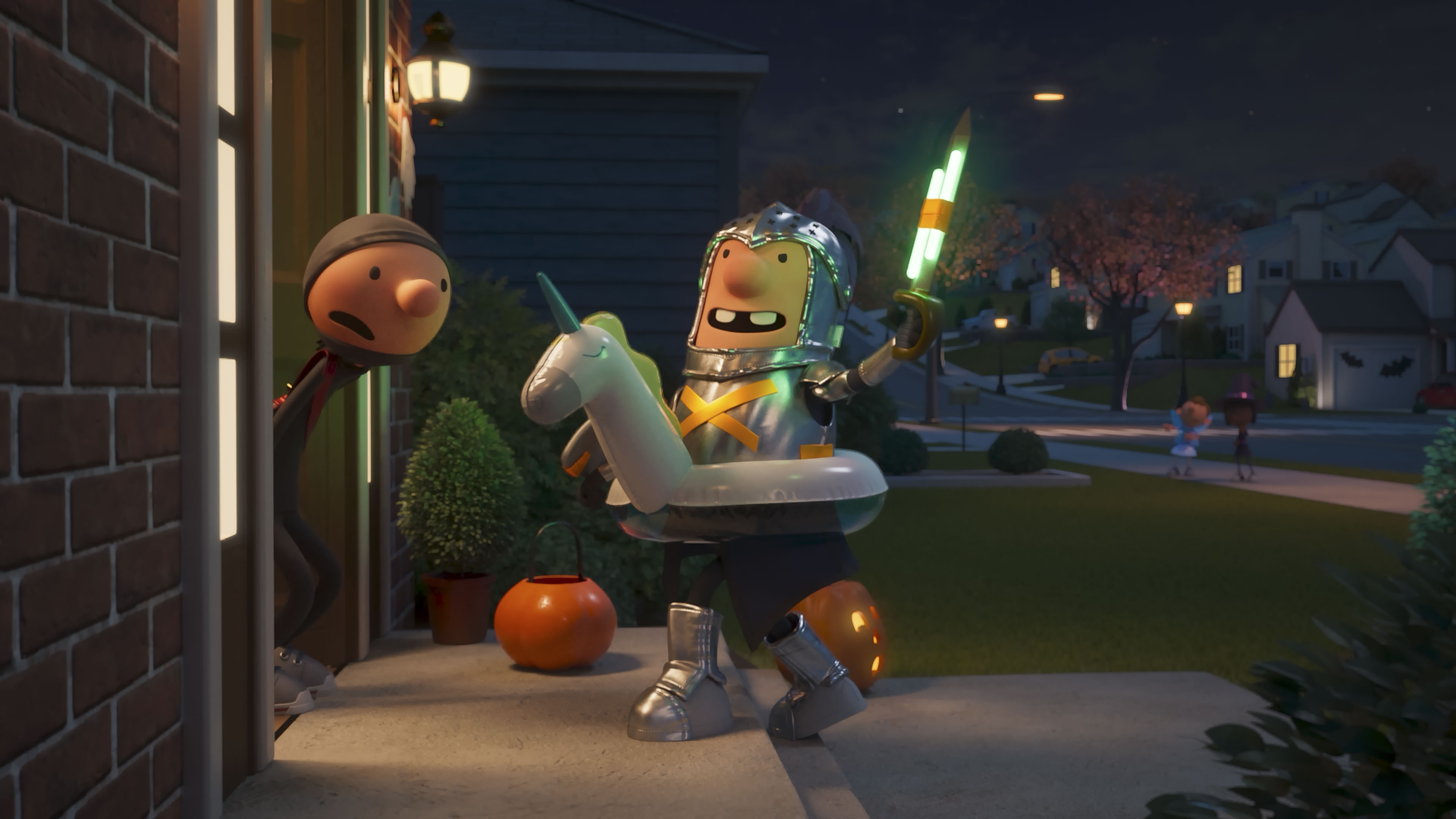 Of course, you’ve talked about this before. How much of you is in Greg and how much Greg is in you? How much of your real life in middle school informed your creation?

Yes, there’s a lot of overlap between myself and Greg. In fact, Greg wants to be a cartoonist just like I wanted to be. So, it’s really funny seeing how much overlap there is. And sometimes I forget that.

Your books have sold over 250 million copies all over the world. What are some of the most memorable responses you get from readers?

I just got back from a book tour and a lot of kids asked me to keep going to keep writing these stories. And that’s really motivating for me because, with 16 books in, I could be hearing a lot of people say, “You know you need to give this up and hang it up!” But when people say that their favorite books are the latest books, that really excites me and compels me to keep doing it.

How do you keep the material fresh and relevant for audiences that are growing up in the world today?

You know, in a way, I’m not trying to keep it fresh! I’m trying to make it old fashioned, because I really want these stories to be all timeless. Yes, I want them to resonate for people 20 years from now. And, you know, I feel like the stories could have resonated for kids my age when I was a kid. So I’m really trying to tell stories that stand the test of time. 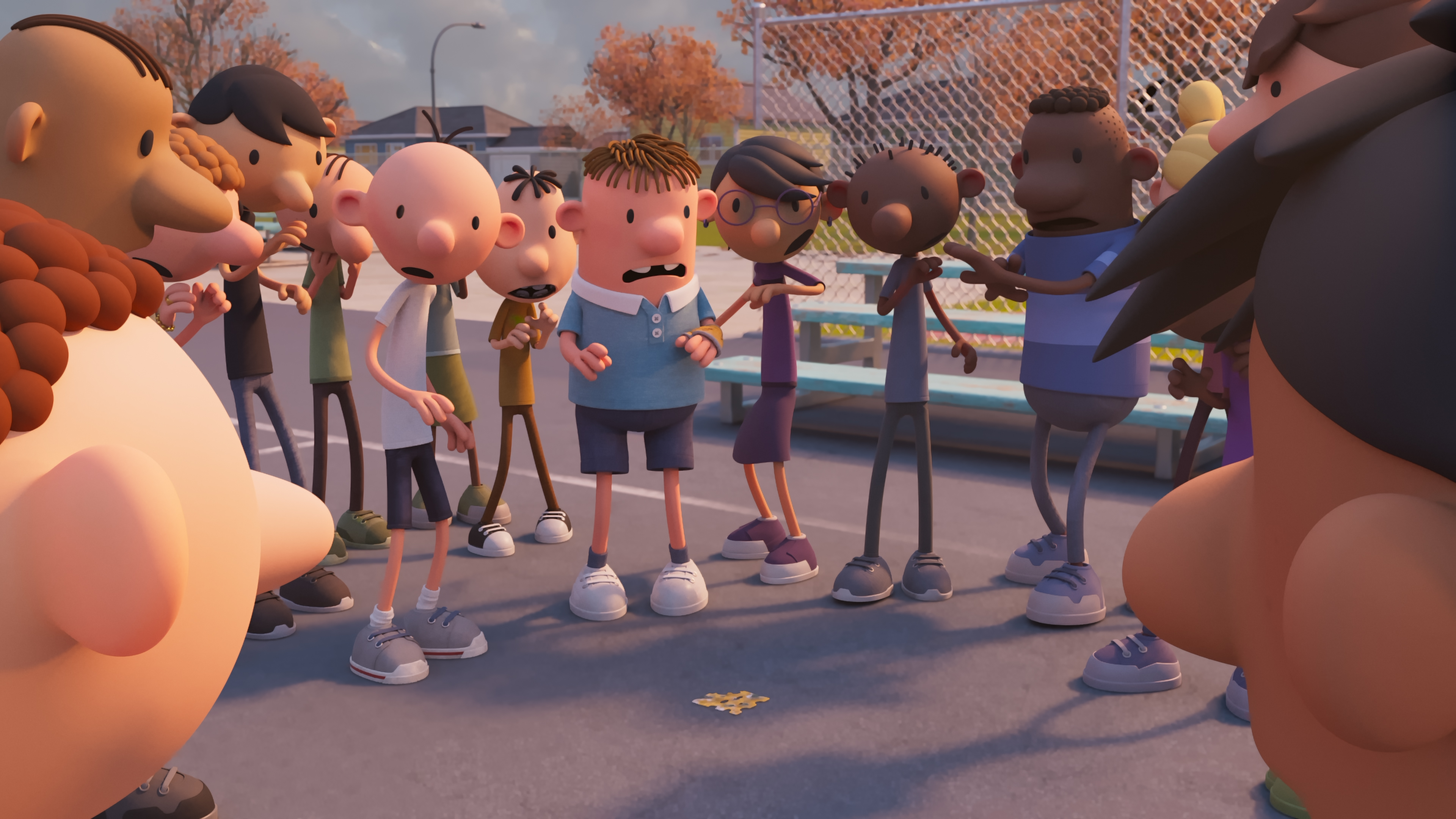 Do you think kids that are growing up today with social media and so much technology are different challenges than we did when we were their age?

I think that our social media was the writings on the bathroom stall, but we didn’t have these challenges that kids have today. So, I think social media is a double-edged sword. You know, obviously it can be great, but it can be very destructive in somebody’s life. So our kids are growing up as digital natives and we don’t know how it’s going to turn out, right? I’m hoping for the best and trying to teach my kids how to develop good habits.

Which animated shows and movies made a big impact on you?

I watched The Simpsons from the beginning back when it was on The Tracey Ullman Show. I liked The Little Mermaid and all the older Disney classics. They made a big impact on my life, and I really loved the Peanuts animated TV specials on TV. They were really great in their own way as well.

What do you think of the world of animation today?

It’s getting really sophisticated and interesting to me right now. Speaking to my kids’ generation, it’s a little bit different than what we grew up with. I think the language of animation keeps expanding and we keep pushing it to more exciting territories. 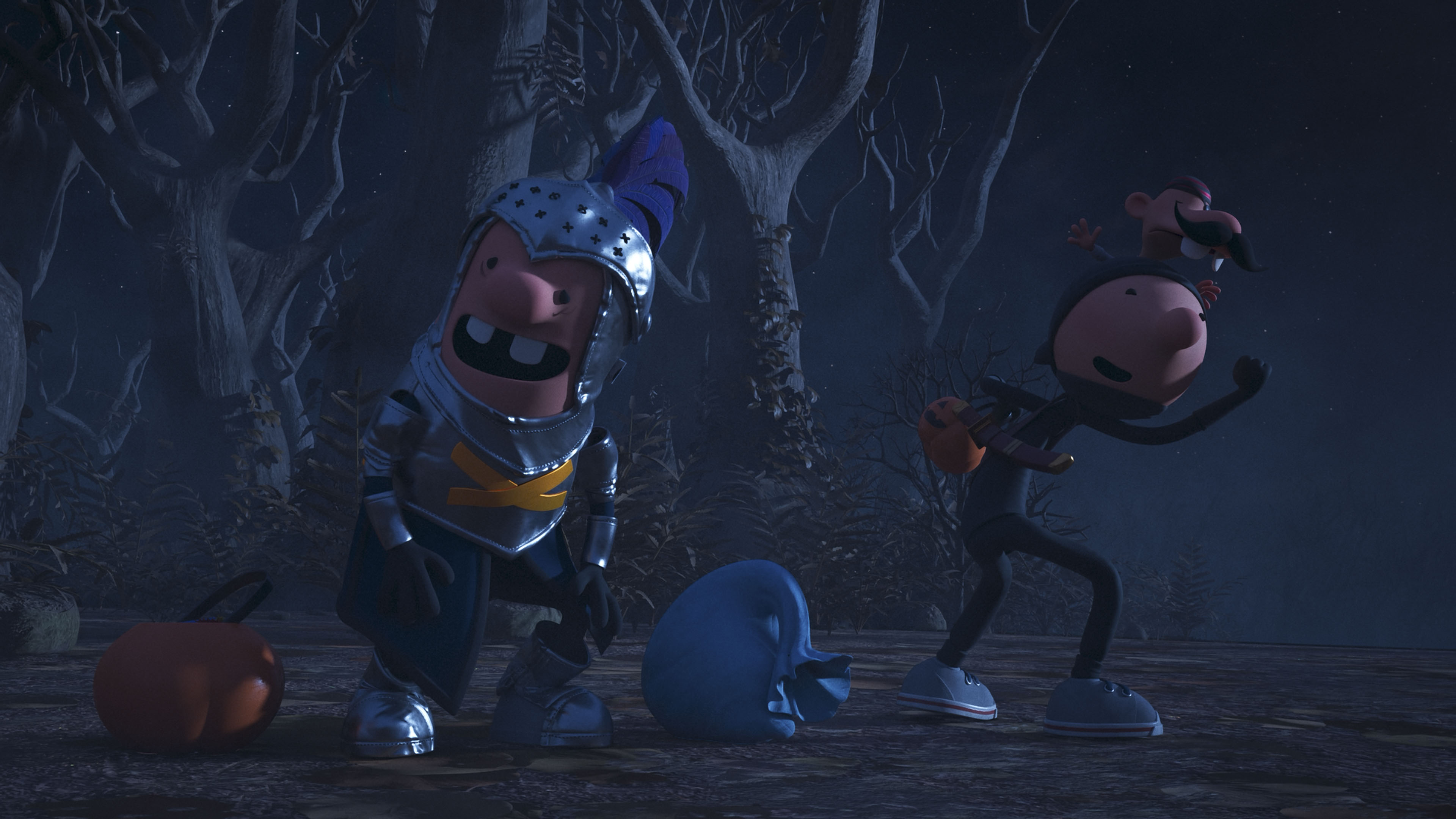 What did you learn about the animation process that surprised you as you worked on this project?

I learned that You can really treat the animated characters like real people in a way. We wanted to make sure that our story felt grounded in the real world. So we used a lot of real world elements and color schemes. We didn’t want it to feel too cartoony. I also learned that when you’re writing for animation, you can really treat your cartoon characters like real performers, because they will be voiced by real actors after all.

In terms of the visual style of the movie, did you look at some other animated films for inspiration?

Yeah, I think in a way, we knew what we didn’t want to do. We didn’t want to try to be Pixar. So we really wanted to create our own style. I have to say I really like the animation style we ended up with. I can’t really put my finger on it, but I really liked the style. It’s sort of a little bit jumpy, which I think is really cool. So I think it’s a perfect blend of like real world elements in that animation.

Final question for you: What do you hope audiences will get out of your new Wimpy Kid movie?

I hope audiences will get joy out of this movie coming into the holiday season where parents and kids are going to watch things on the couch together. I hope these stories bring them together and get the two generations talking to each other.

Diary of a Wimpy Kid will premiere on Disney+ this Friday, December 3.