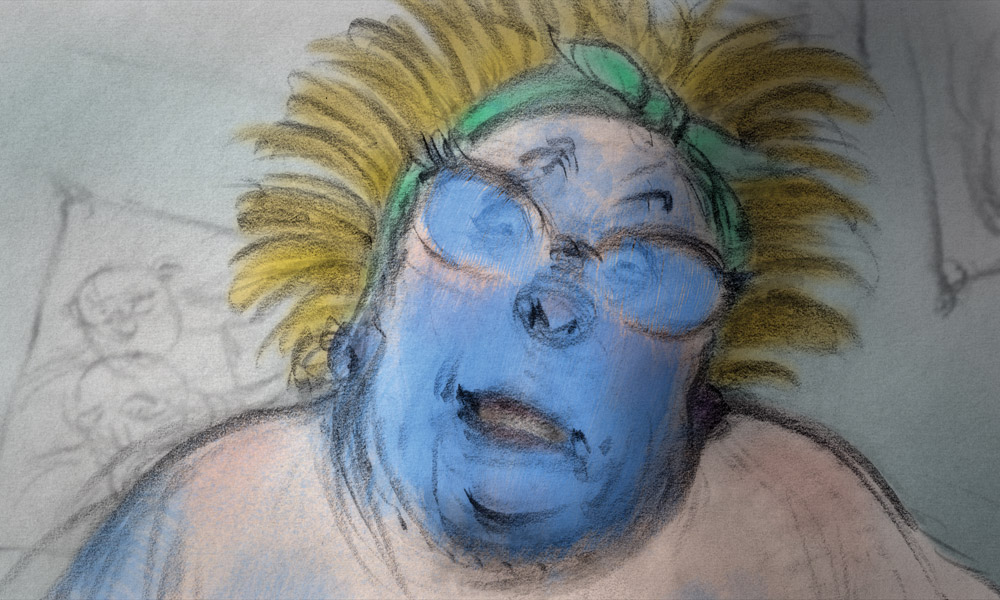 If you’ve been following the world of indie animation over the past few decades, chances are you have fallen in love with the work of Joanna Quinn. The British animator and director introduced her wonderful and relatable everywoman character Beryl in the 1987 short Girls Night Out, which took home three prizes at Annecy. Her 1996 short Famous Fred and 1998’s Wife of Bath were both nominated for Oscars, and her 2006 short Dreams and Desires: Family Ties was the winner of the grand prize at Zagreb’s Animafest. General audiences will also know her for her acclaimed hand-drawn animated ads for Charmin, Whiskas and United Airlines.

This year, her latest animated short Affairs of the Art, which was made with her partner and husband, writer Les Mills, catches up with the wonderful, eccentric and hilarious character Beryl. Quinn was kind enough to chat with us since her NFB (National Film Board of Canada) produced short is also featured at Annecy this month: 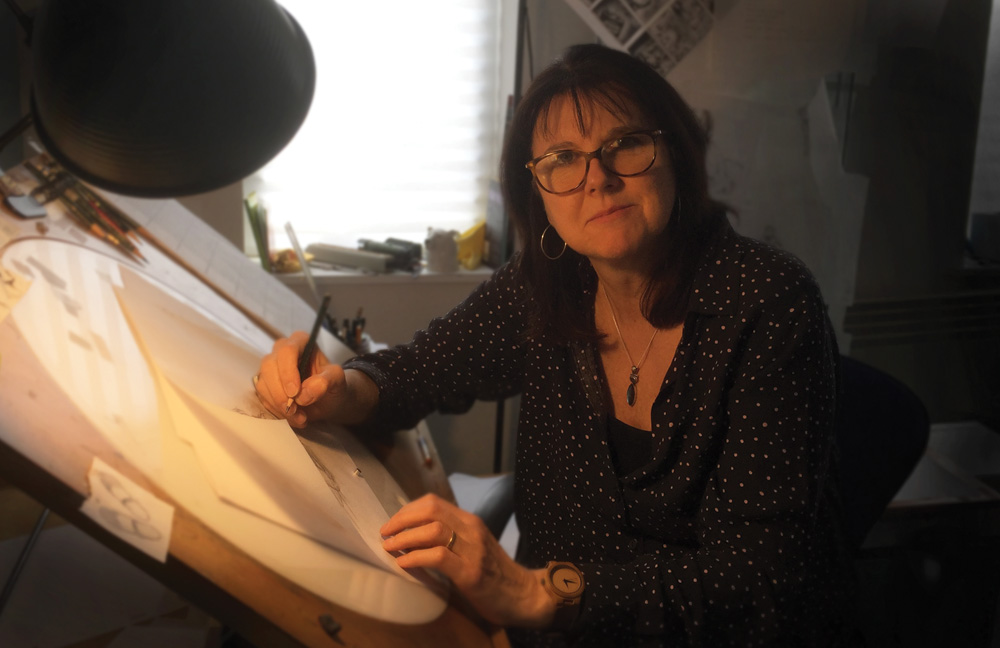 Animation Magazine: It’s so good to catch up with Beryl and her family again in your new short! How long did it take you to make this latest chapter in her life?

Joanna Quinn: Well … Les [Mills] wrote the script way back in 2010, the storyboard was finished in 2015, and I began seriously animating in 2016, so the actual production took about six years. Waaaaay too long, and very glad to be on the other side now!

What do you love about Beryl and her family?

We love Beryl because she is a joy to animate and a great character to write for. It’s fun to subvert the audience’s expectations of an ordinary middle-aged woman. Les and I are great observers of people and love to create characters that are multifaceted and unusual. We’ve made three films with Beryl as the main protagonist, so in Affairs of the Art we wanted to explore other characters. Enter her family: Ifor, Beryl’s husband and muse … mostly naked; her ambitious sister, Beverly, who’s fascinated by death — and the complete opposite of Beryl; geeky son Colin, obsessed with technical details like railway signalling systems and screw threads. Beryl actually has the least screen time in this film, but by showing her family we get a deeper understanding of her character and relationships. 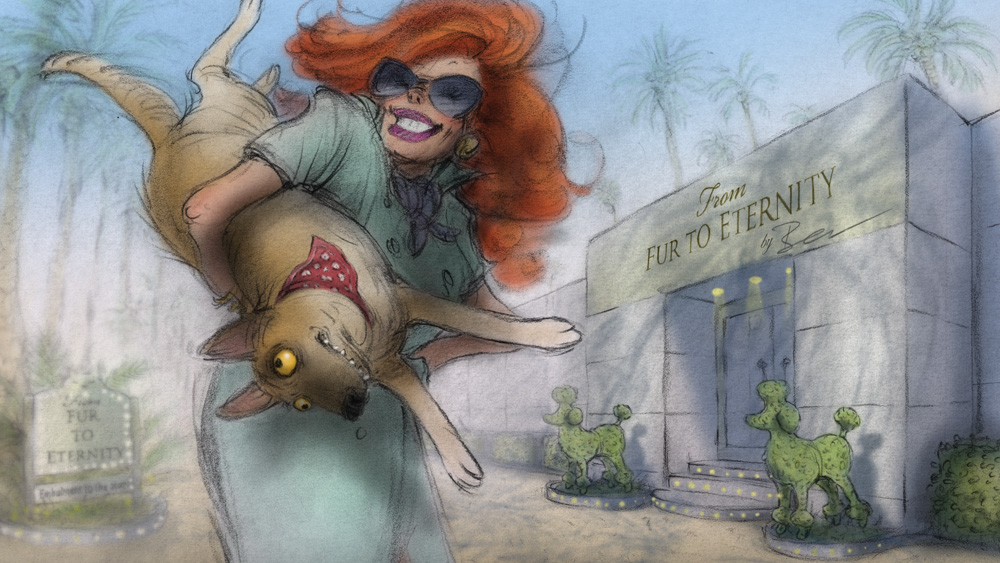 What are the pluses and minuses of living and working with your writer/producer?

The pluses are we never have to go to work and can make plans lounging on the sofa with cups of tea, but the minuses are that we never stop talking about work. It drove our daughter out of the house at age 17, and she vowed never to have anything to do with animation! She became a vet.

What kind of budget did you have? Was it a lot more than your previous short? 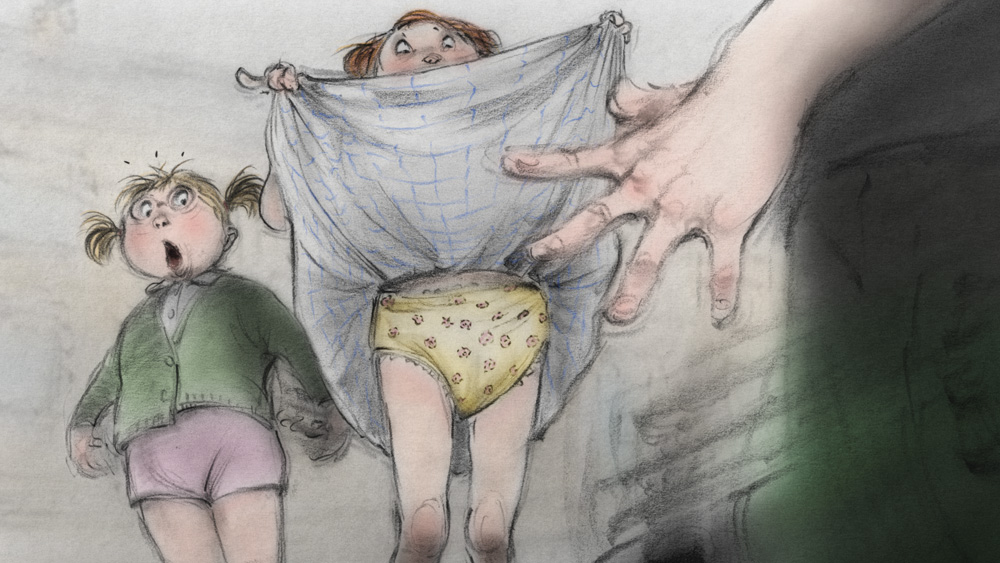 Affairs of the Art is actually animated on paper and colored in TVPaint. I originally animated for six months on my Cintiq, but I realized I wasn’t enjoying animating digitally and my animation became quite stiff. I loved exploring the TVP software and it’s great for coloring, but I found it hard to replicate the fluidity of animating on paper. I think it’s because I’m very intuitive when I animate and I get lost in the mark making and enjoy making mistakes, which might take me in different directions. I’m also very physical when I animate and use my fingers to smudge and soften the pencil marks, which is just impossible on the Cintiq. Anyway, I reluctantly shoved my Cintiq to one side and set up my dusty lightbox again and did a Google search for “world’s last supplies of animation paper!”

When did you first realize you wanted to work in animation?

It was in the first year of my graphic design course at Middlesex University. We were given a short animation project and the first thing I animated was a dog walking. I filmed it on a video line tester, then pressed play — I remember being utterly stunned that it actually worked. I watched it over and over, mesmerized by the fact it had come to life. It also made people chuckle, which was a revelation, too. That was when I decided that I wanted to animate and make films that would make people laugh. 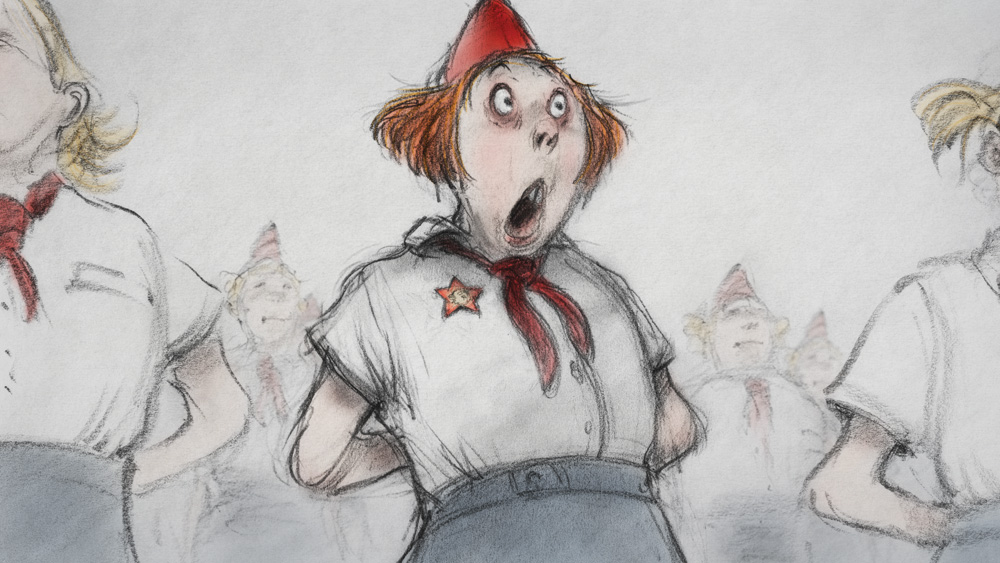 I am such an animation nerd that I love and admire many animators. Somebody who has a special place in my heart, though, is the exceptionally talented Michaela Pavlâtovâ. We are the same age, and her first film, Etuda Z Alba, came out the same year as my first film, Girls Night Out (1987). Our various films were screened at the same festivals over many years, but I always arrived just after she had left, and vice versa. It was not until relatively recently that we finally met and I felt like I’d met my twin separated at birth. Her storytelling, design, color and humor are exceptional, and she will always be my idol.

My top choice for animation god would have to be, of course, Milt Kahl. I can sit for hours watching his animation on a loop, crying in awe. In fact, I used to visit the other animation god, Richard Williams, at his studio in Bristol, where he had many boxes of Milt Kahl’s photocopied animation. Together we would choose a scene, like Madame Medusa [in The Rescuers] pulling off her false eyelashes, film it and go through it frame by frame, marvelling at Milt’s genius. I treasure those moments with Richard, who died not long after. 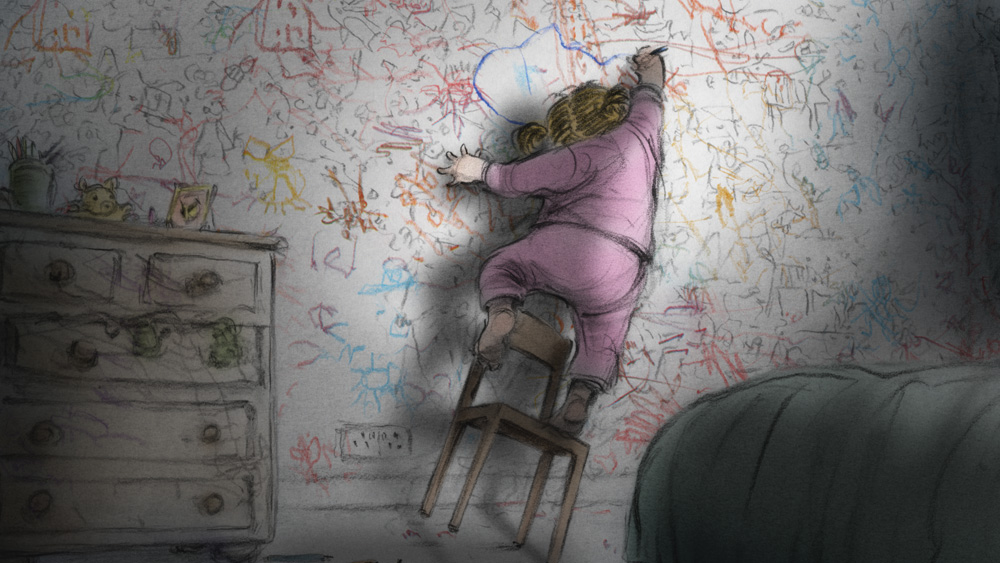 What are the animated or live-action movies or TV shows that have stayed with you the longest?

Short animated films that have stuck with me are Carnival by Susan Young, Two Sisters by Caroline Leaf, Your Face by Bill Plympton, Oh Willy… by Emma De Swaef and Marc James Roels and, more recently, Naked by Kirill Khachaturov — all masterpieces.

What do you think about the state of animation today, especially the fact that there seem to be more opportunities for women today than, say, 20 years ago?

The animated shorts genre has always attracted women, so I don’t think it has changed that much, but I certainly feel there is a space now for films which are more diverse and radical. The one positive thing I have noticed recently is the long overdue change in the representation of women on juries and panels at many film festivals (not all, of course). This absolutely makes a difference to the way women working in animation see themselves in the industry.

The more visible women and minorities are in positions of power, the more inclusive it feels. Things are changing (very) slowly, but we need to constantly remind the white men in power about unconscious bias and how to embrace change. 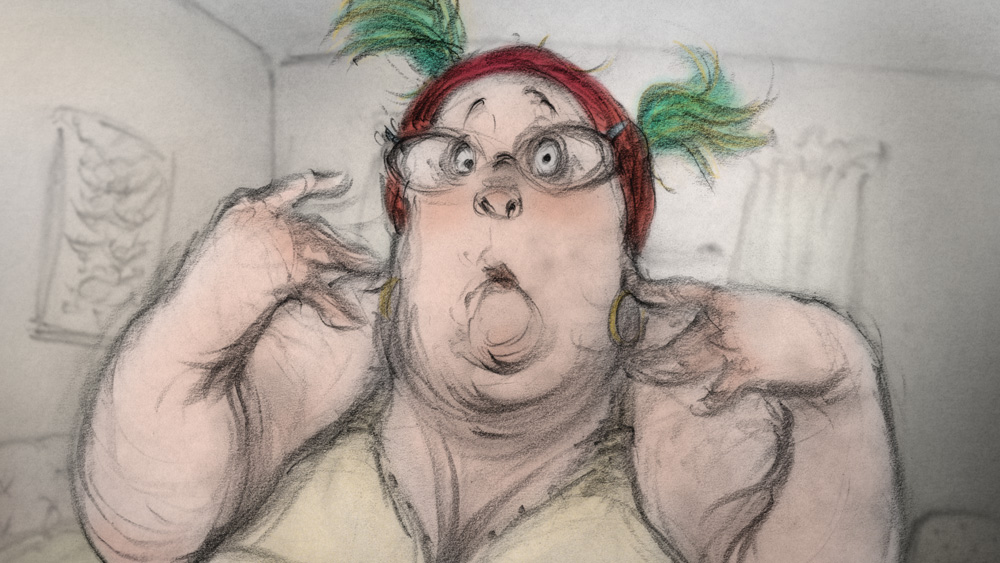 What’s the best advice anyone gave you about pursuing animation as a career?

Have a goal in mind and make it happen. Take risks and make big decisions as soon as you can, before you get burdened with the responsibilities of life. Ask for help and advice; most people in animation are encouraging and want to give a helping hand. Top tip: Always send a follow-up email if your first one doesn’t get an answer. It’s probably not rejection, just a busy person.

What is the funniest or most memorable reaction you ever received for your shorts?

I once took my grandmother to a screening of my film Girls Night Out. It was supporting a live-action feature, and my grandma sat diligently through the films, clutching her handbag on her knee. During the Q&A, she was waving at me from her seat, telling everyone around her that she was my grandma. Anyway, on the way home I asked her what she thought of my film. She then proceeded to tell me how fantastic she thought the live-action film was, but hated the rude cartoon that was screened with it. I took full credit for the live-action film and changed the subject.

Affairs of the Heart is part of Annecy’s Official Selection this year. You can find out more about Joanna Quinn at berylproductions.co.uk.