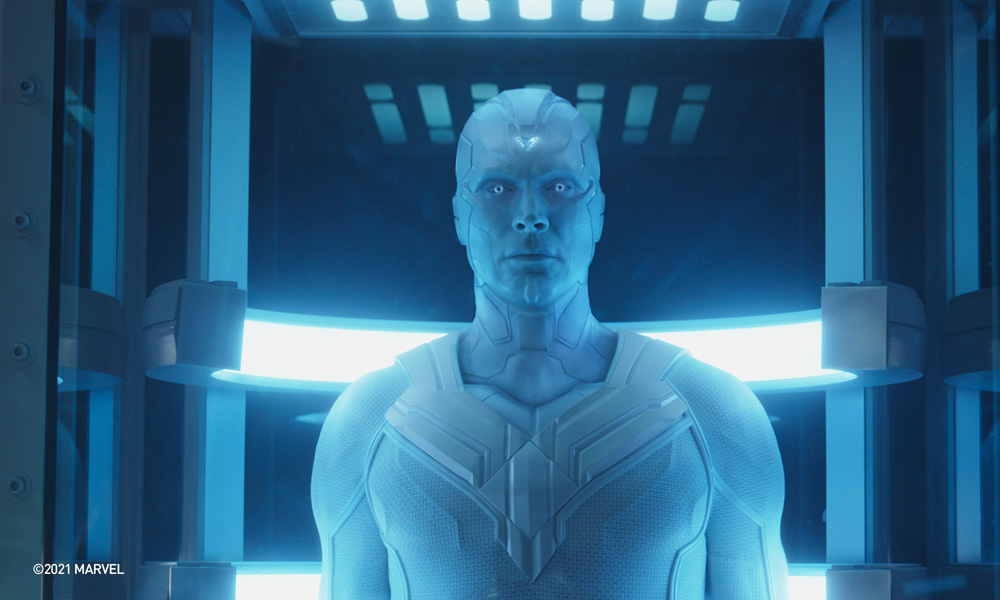 Watching the dazzling visuals on display during the eight-episode run of the hit Marvel Studios/Disney+ series WandaVision was one of the VFX highlights of the past season. The team at Digital Domain delivered around 350 VFX shots for the show, which featured various homages to classic TV sitcoms and a spectacular battle of Super Witches, the first glimpse of Chaos Magic and a face-off between superhero Vision and his clone.

We caught up with Marion Spates (Lost in Space), the show’s Emmy-winning VFX supervisor at Digital Domain, who noted, “We had dozens of Digital Domain artists and technicians working across three locations and two countries. Each department coordinated with the others to ensure that everything from rigging to animation to cloth was on the same page. That gave us the flexibility to create feature-level effects in a TV timeframe without missing a beat.” Here is what Spates shared with us: 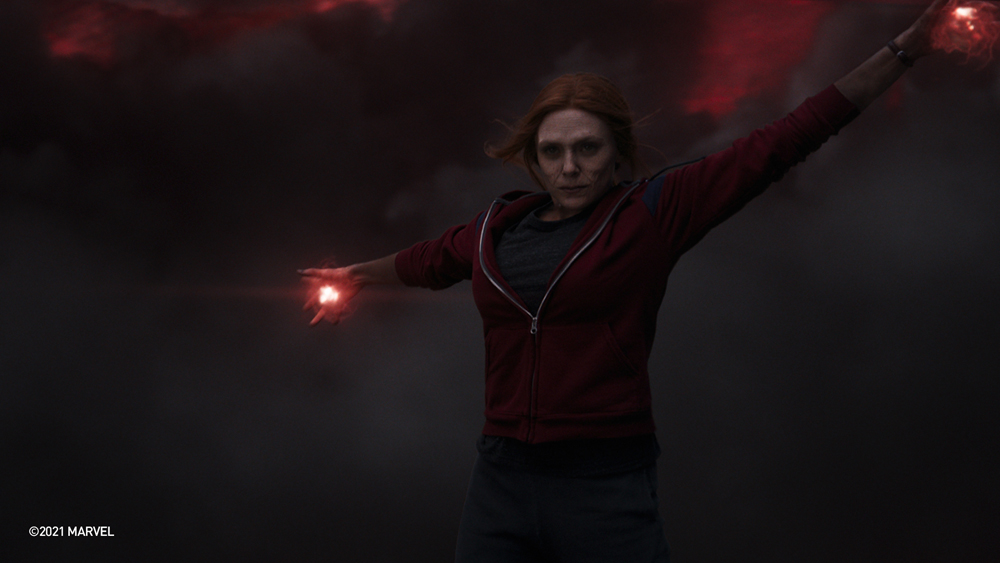 Animag: Can you tell us when you started working on the project and how long you had to deliver the shots?

Marion Spates: We started work on WandaVision back in January 2020, and we were on set in late February, but the week after we went into lockdown and production halted. It wasn’t until September that filming resumed, and it ran through October. At that point we were all working from home, but we collaborated with Marvel Studios every step of the way. We turned in the last shots in February of this year.

How many people worked on this project with you at Digital Domain?

It’s hard to put an exact number on how many people from Digital Domain worked on WandaVision. Team members jumped in to help out where needed, then moved on to another project. We probably had around 65 compositors working on the show at any one time, but the work was split between our offices in L.A., Vancouver and Montreal. Overall, around 287 people touched the project at one point or another. 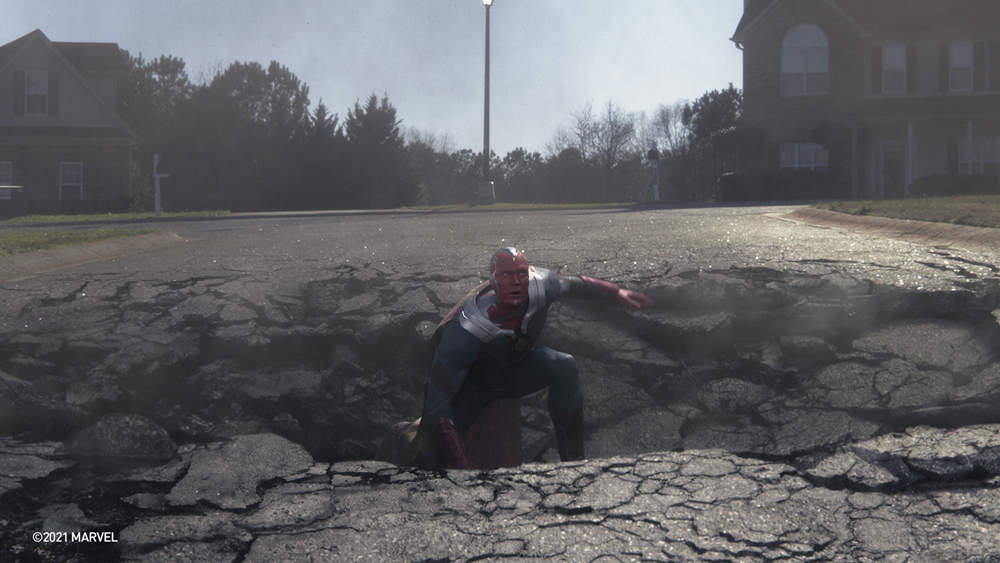 What would you say was the biggest challenge of delivering the visuals for WandaVision?

It was an ambitious project from the start. Marvel fans are used to a high level of visual excellence, regardless of the platform, so we created feature-quality effects in a condensed period of time. And we did it all during a pandemic! Fortunately, Digital Domain is organized in a way that allows us to cooperate between departments, so the same tools we use on films we can use on TV – or ads, games, digital humans. The main difference is just the timeline.

Which VFX tools did you use to deliver the goods?

We used all the traditional softwares: Maya, Nuke, Houdini and V-Ray for rendering.

What did you enjoy most about creating the visuals for this world?

One of the best parts of this project was bringing a new Marvel character (White Vision) to life. Our entire team worked extremely hard to make this character be the best it could possibly be, and we were invested in his creation very early in the process, as soon as Marvel sent us the concept art. It’s really the little details that stand out. Creating an all-white character can be difficult, so we created an iridescent, prismatic effect similar to when light hits a bubble. You only see it when White Vision moves at certain angles and under certain lighting conditions, but it adds depth to the character. It’s those types of little things that really brought him to life for us. Marvel characters are all iconic, and everyone at Digital Domain can be extremely proud of our work. 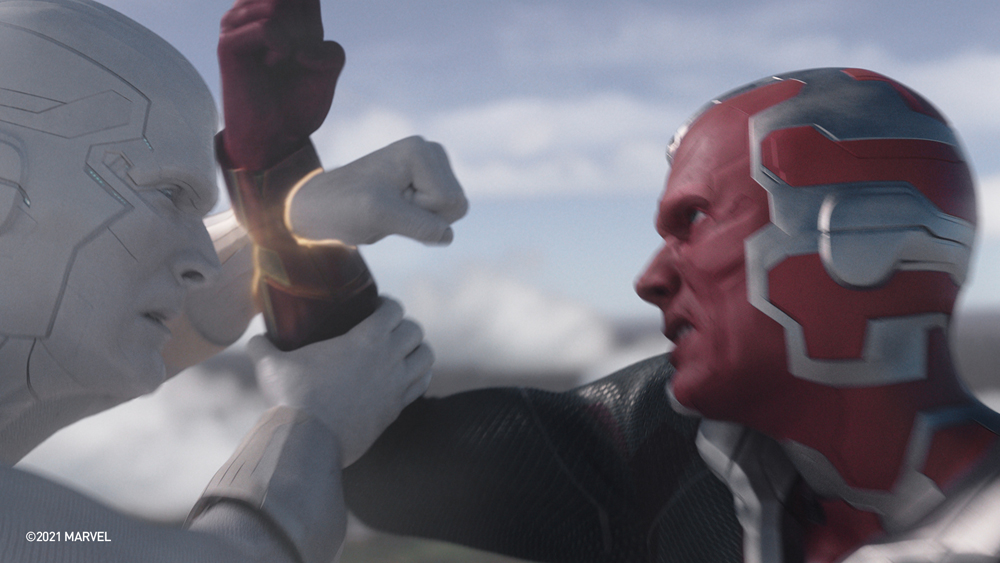 How did you make the VFX scenes for the show stand out from other similar shows and movies we have seen in recent years?

It starts with the script. Marvel pushes the boundaries with story and complexity, and the episodic format gave them room to try things they had never done before. We also challenged ourselves wherever we could. That’s true of all the projects we work on, and the creativity and originality in Marvel’s properties lets us try things we’ve never even considered before. For example, the Vision asset was initially built in 2015 and has been in use ever since, so we decided to redo the textures from scratch. We knew that we would be getting extremely close to Vision and White Vision, so we decided to use everything at our disposal to make it look as realistic and impressive as possible, even in close up shots where there are two of him, when Red Vision is fighting White.

Can you talk about how you met the challenge of creating cinematic-quality effects on a TV production?

In terms of quality, Marvel treated the episodic show as if it were a film project. They wanted to maintain that cinematic quality fans are used to, and our management team really helped us to achieve this. We had an excellent producer, Suzanne Foster, helping us manage schedules and making sure that we had the right talent in place. The time frame was different, but ultimately, in terms of the work, we approached it the same way we would a feature film. 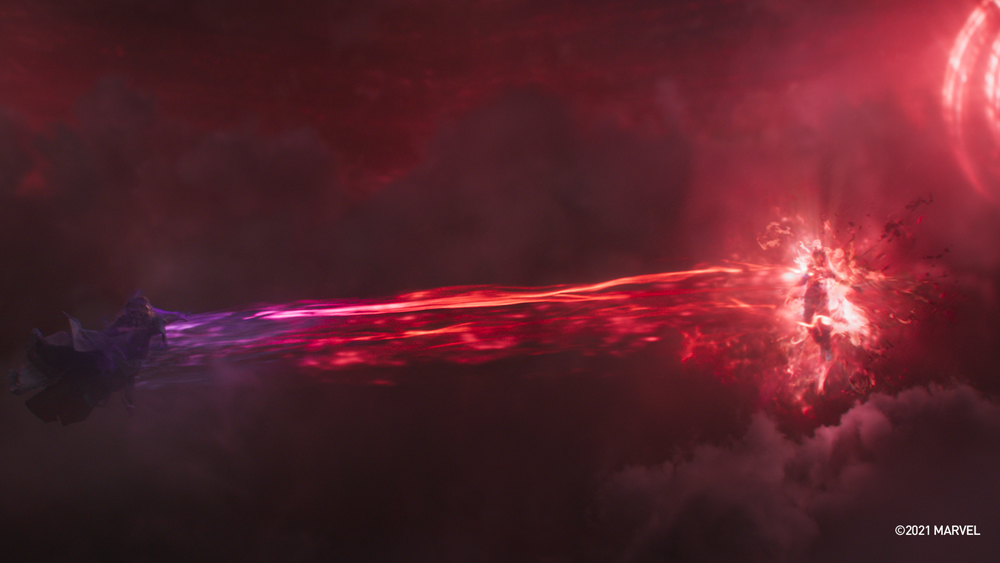 How did you collaborate with the showrunner and director?

Marvel was an excellent partner throughout the process. We worked with Matt Shakman (who directed every episode) and Tara DeMarco (the VFX supervisor) from the start. They brought us into the process during the previs and postvis stage, and we were able to offer our creative input. For some of the work we did, including the Chaos Magic, we worked closely with them and tried out over 100 iterations.

What do you think is the most important factor to consider when you are working on a large-scale, VFX-driven project which features well-known characters?

Understanding the language that’s already been established is a large part of it, and knowing how far you can push it. It’s important to make sure you stay true to what has been established in the past, while also making room for changes that allow the work to improve. As artists, we love that these films continually challenge us, and constantly make us wonder if there’s a better way to do this, or if we can add new touches to make it stand out. 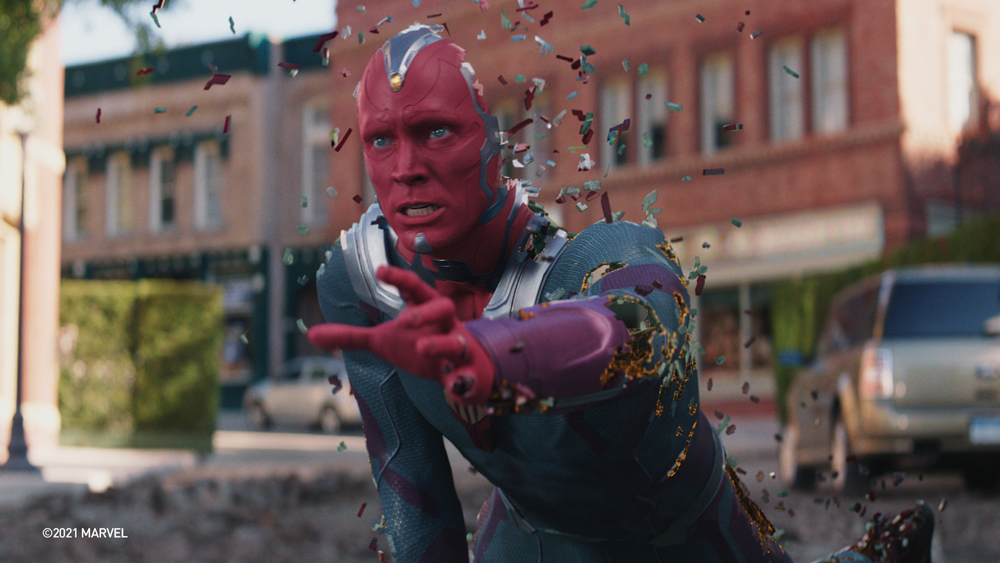