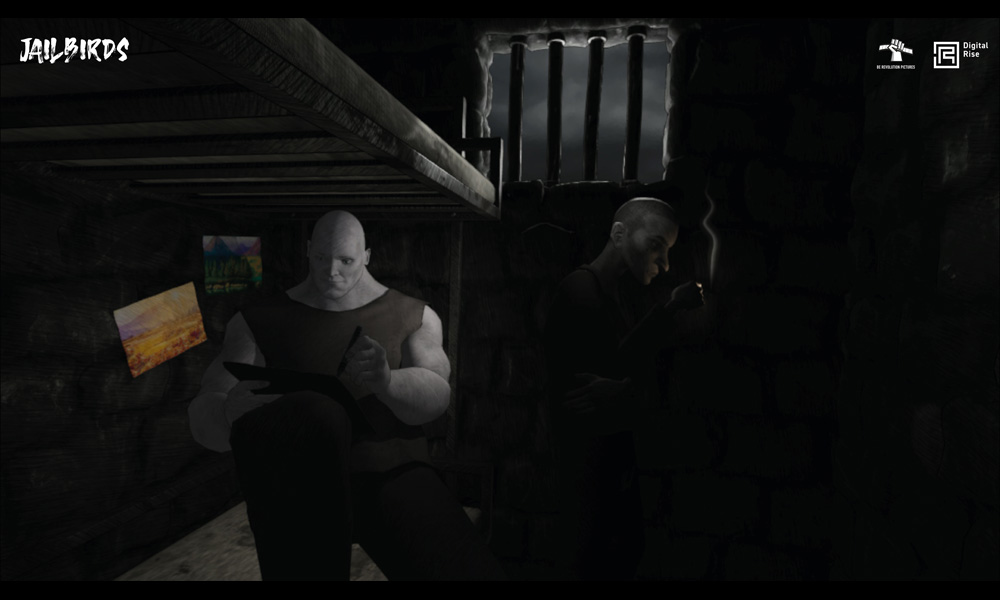 One of the new animated VR projects generating an early buzz prior to its premiere at Tribeca Film Festival in June is Thomas Villepoux‘s innovative Jailbirds: Bwa Kayiman. Based on the world created by Belgian comic-book artist Philippe Foerster, the project is a fantastic tale about the prison system and the value of human freedom. We caught up with the innovative director to find out more about this project, which is the first in a trilogy of VR presentations. 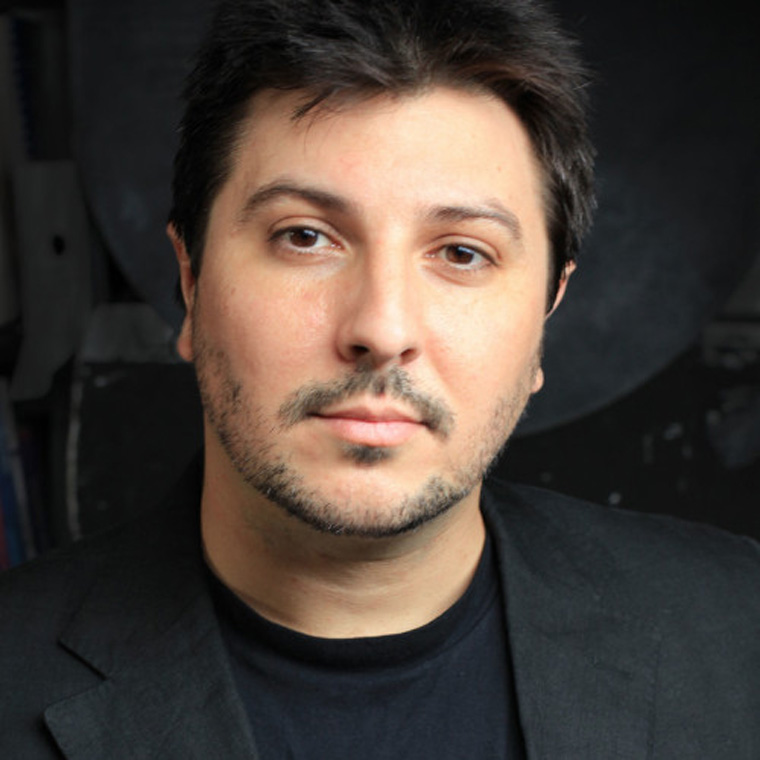 Can you tell us how you got involved with the Jailbirds VR project?

It’s a long story! Jailbirds is an adaptation from a comic book, Paulot s’évade, published in Fluide Glacial in 1988. When I discovered it in my teen years, it was already a classic. I had the feeling this very short story had a lot of potential — there’s a lot in it: emotion, concepts, symbols, fantasy, irony and dark humor… Fast forward 20 years, when I got involved in VR (another long story), the story came back on my radar. It’s just so perfect for VR.

We were planning on founding Digital Rise with François Klein, and we wanted to create something radically different from what was being made in VR. More than a digital art installation, we wanted to create a story — a story worth living. I wrote the first adaptation with the help of Johan Ingler and Kinga Smith, putting a little “Hollywood” perspective in a Belgian story. Later, we had the chance to work in Belgium with Domenico La Porta and Kasia Gondek, who have a lot of experience with animation and helped us fine-tune the writing. Writing is often the weak point in VR experiences, as people focus a lot on tech. That’s why we made it a priority. When we got into production, the scripts were on point and I could focus on directing, actors and visuals.

The big step for the project was the Stereopsia festival in Belgium. We won our first award for the project from Wallimage and met Griselda [Gonzalez Gentile] from Be Revolution. She came to us, saying she loved the project and despite being a beginner in VR she would do anything to make it happen. And she did! The development process was quite long but totally worth it. Jailbirds is my baby, I’ve been working on it in and out for maybe five years. It’s a great accomplishment to see it premiering. 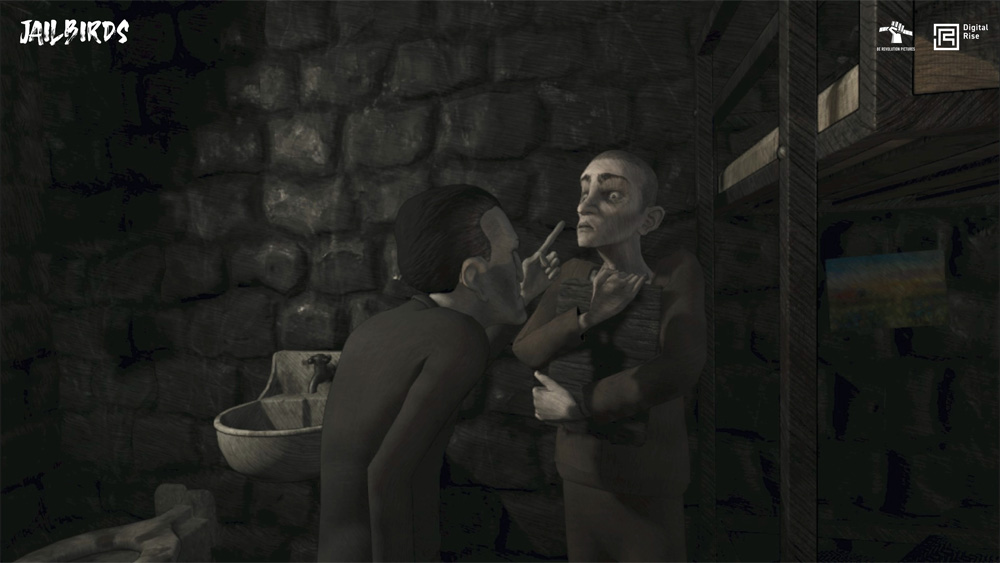 What drew you to the material?

The story is just perfect, both for VR and traditional. It’s dark and touching at the same time. It has a lot of different levels of interpretation; you can read the story as a fantastic tale, or you can take it as a metaphor for freedom. Actually, you can also think the poor Felix has drug-induced hallucinations. How can you put all that in six pages? That’s the talent of Philippe Foerster. I love Foerster’s style. There is a lot of his work that could be the base of amazing stories. It often matches the goal that I try to achieve in every work I do: provide a perspective that puts humanity back at its place in the universe — a bunch of monkeys on a tiny rock flying in space, busy giving each other awards and crowns.

Where was the animation produced and how long did it take to make?

The animation was produced in Wallonia in Belgium by the animation studio The Pack. The production itself lasted for about six month. The sound and music were produced in Nouvelle-Aquitaine in France by G4F, who is specialized in work for video games. We had to do all the work under COVID lockdown and it made the process quite complicated for the studios. At first, we tried to delay the project, but then The Pack managed to create a workflow with most people working from home — including me and the artistic director Fred Remuzat, who were in France.

Before that, we had a long development phase, of course. We had the chance to have the studio involved from day one, creating prototypes, working on character design and shaders. To me, this is the most important phase. 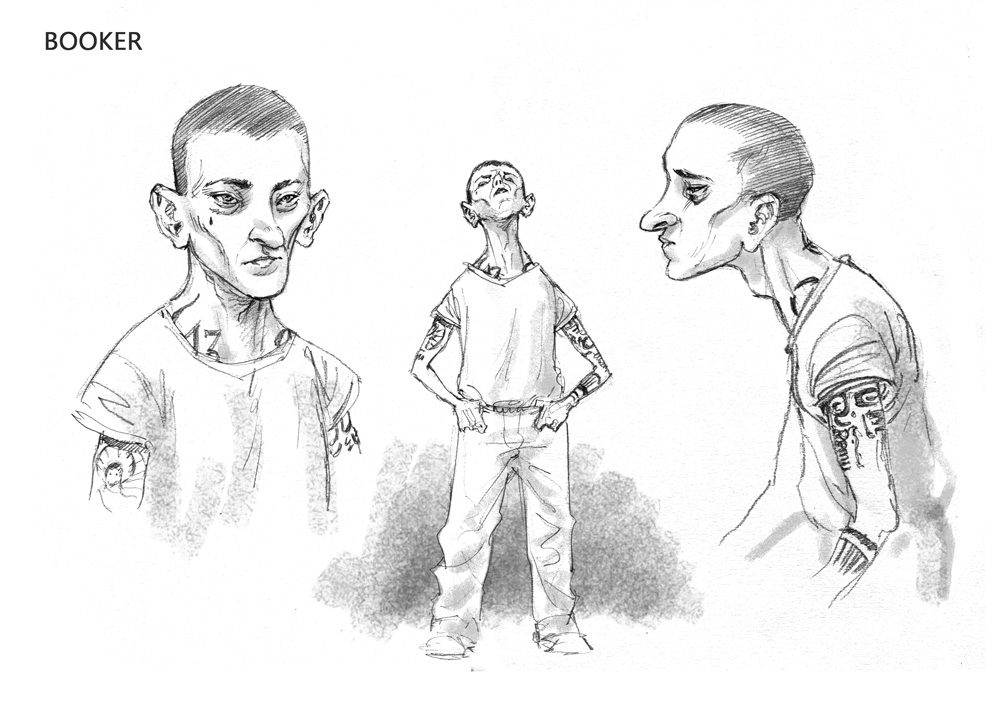 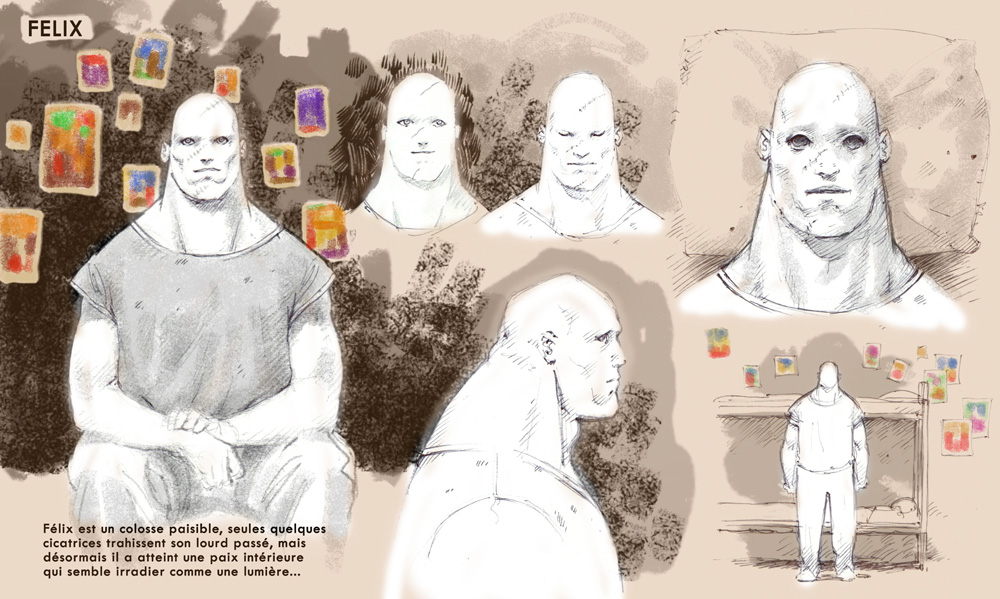 Overall, how many people worked on the short with you ?

Quite a lot for such a short project, and the surprising fact is how little of them I met in person! Thanks, COVID…

I think the whole crew is close to 80 people. Over the development phase, many people helped us shape the project: companies like DVgroup, Unicorn, Reverse Engineering Studio, or institutions like Wallimage Creative or the Pôle Image Magelis. Once the production began, however, we limited the work to the core creative crew, to be able to perform quickly and keep the project very consistent in terms of visuals and sound.

What was your ballpark budget and which animation tools did you use?

I don’t get involved in that sort of discussion, and every time I asked the producers, the answer was “not enough!” Joking aside, the total budget was around €300,000 (~$367K USD).

Jailbirds was coded in Unity and the sound team uses Wwise. The Pack developed their own workflow system, to be able to move freely between Unity and other animation tools like Maya. That was very convenient to get a fluid workflow. We used motion capture of the actors to help with animation and make the presence of the characters extremely human.

What would you say was the toughest part of the enterprise ?

COVID aside, I think the most challenging aspect for us was performance. Working with a real-time engine on high-quality animation is tough and requires a lot of tricks. You never know what device the audience is going to use to watch your experience, it might not be the monster computer you have in the studio.

We had high expectations for the visual and sound universe of Jailbirds, including a specific shader, reverbs … All this is a workload for the device. You don’t have that kind of problem with traditional pre-rendered animation. That is definitely a limitation for creativity, but what is creativity without limitations? The studios worked wonders to help us achieve the look we wanted. 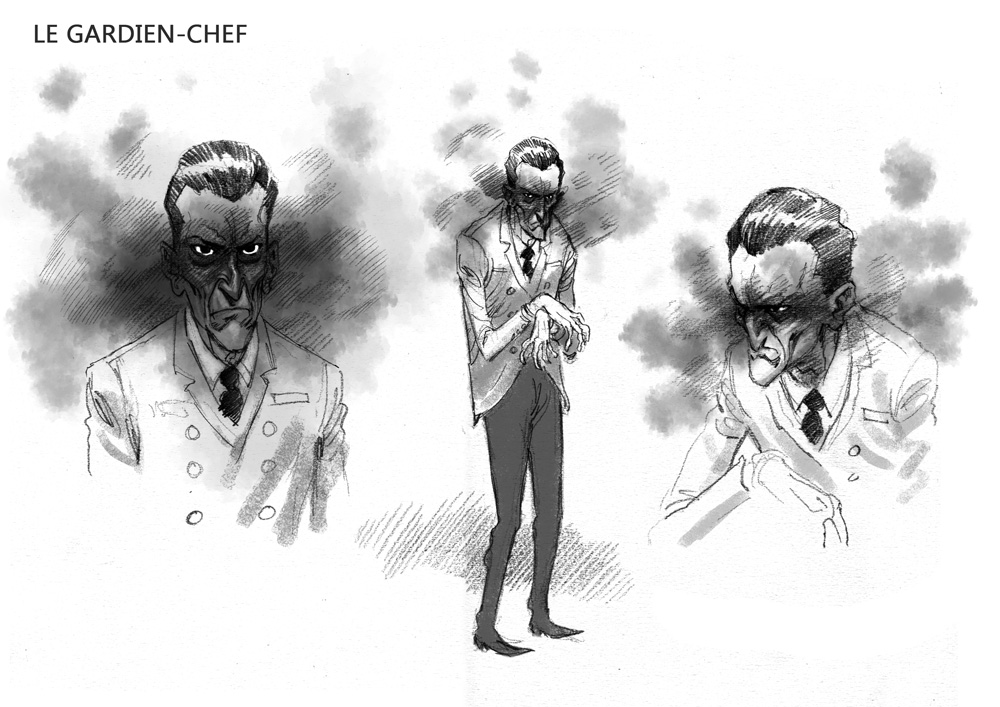 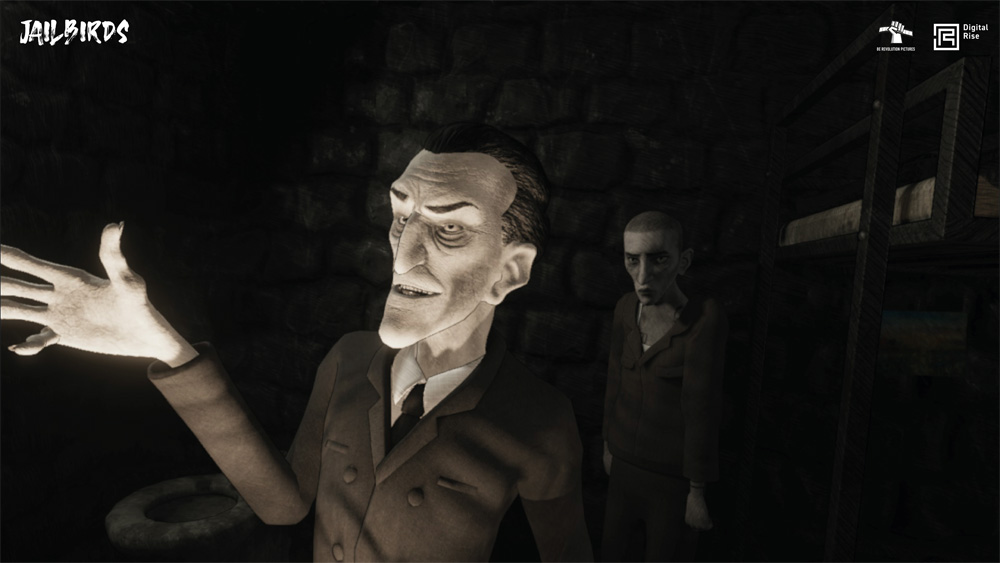 Lots of things. I’m very proud of having gathered all those different people on this project. Virtual reality is often about getting people from very different backgrounds to understand each other. That difference is the richness of the project. For example, bringing in Tómas Lemarquis was a get. I knew he was the right actor for the Chief-Warden, but I wasn’t sure he would be interested in such a small project. Luckily, he was very open and got into the story right away. Along the production, I was surprised by the dedication and meticulousness he put into the project. Working with him brought so much to my own work.

What was it about the source material that lent itself well to the VR world?

First, I think comic books are an amazing source material. There’s a lot of freedom that allows creators to experiment visual ways to tell a story. Working with CGI is hard, especially as the video game industry has already set up the standards. There is no way we can compete with a triple A game, and we don’t want to! We need to take the audience in a story in a different way, and comic books can help with that.

Then, basically the story talks about VR … Jailbirds is about freedom, space, distance, what you can experience from afar … I don’t want to tell too much about the story, especially as we are only releasing the first of three chapters right now, but you’ll understand when you watch it.

What we wanted to do with Jailbirds is to get the best from VR storytelling. We are using both the direct emotion effects, like we had with the first roller coasters or horror games. And we are also building a true narrative universe with characters and plot. The immersion and the motion capture make the characters look so real when you’re sharing their prison cell. The original comic had that amazing way to create touching characters in a very short story. 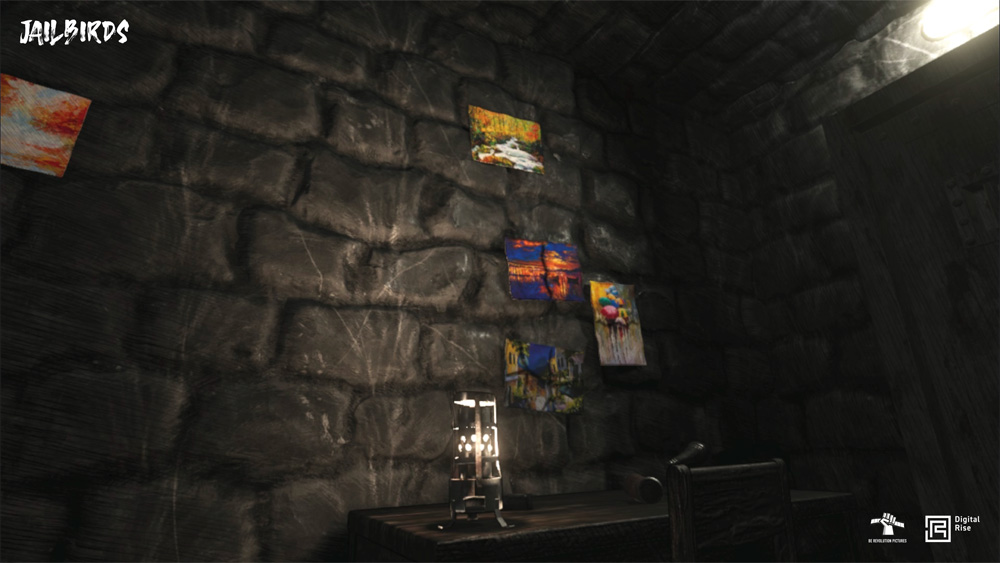 What is your take on the potential and future of VR animation in the next five years?

Jailbirds will be a 6DoF interactive VR experience, a 360° linear film and a traditional short film. In the upcoming years, I’m fully convinced that this type of cross-platform content will happen. Now that the quality of real-time rendering engines is growing exponentially, we’ll be able to create cross-platforms assets that can be used for films, TV shows, video games, mobile games and VR/AR experiences. I hope this will be used for intelligent cross-platform IP development more than useless licensing marketing products.

I really hope VR gets out of the actual very premium / happy few targeted experience standard. Some of the experiences we have right now could satisfy larger audiences, and we are just lacking the diffusion network. The end of the pandemic hopefully will give a kick off to that. I’m still convinced the future of immersive goes through out-of-home activities, even if it’s quite complicated right now.

I can see around me that the huge projects that would have taken immersive entertainment to the next level in 2020, and were delayed because of the COVID pandemic, are starting to come back on track. We’ll see some major breakthroughs in the next two years. The future is very exciting!

New Featurette Dives into the Powerful Friendships of ‘Luca’
Sneak Peek: Beloved Voices Reunite in ‘The Stars of Rugrats Special’ on Paramount+ Today