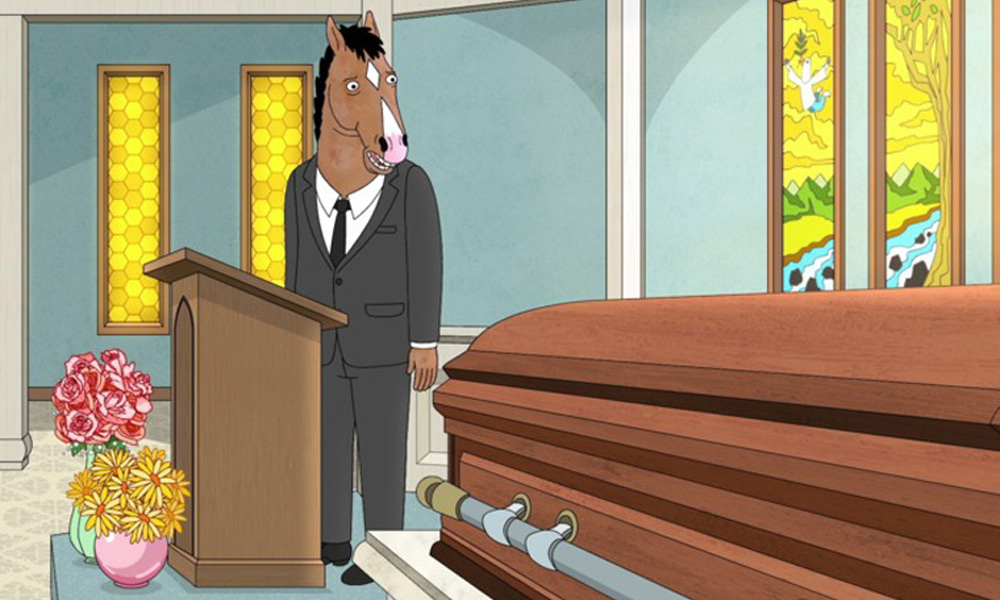 Animation veteran Mike Hollingsworth is having one of those crazy Hollywood years. Not only is he the supervising director of Netflix’s acclaimed show BoJack Horseman, he also helmed the streamer’s other popular toon Tuca & Bertie (which was surprisingly cancelled after only one season). Hollingsworth, who has worked on a wide variety of animated shows including The Mr. Men Show, Mad, The Life and Times of Tim, The Ricky Gervais Show and Trip Tank, was kind enough to chat with us about how he juggled the two hit shows and how he and his team, which includes director Amy Winfrey, were able to deliver the Emmy-nominated episode of BoJack Horseman, “Free Churro” last year.

Animag: So, first of all, congrats on your super fantastic year and the Emmy nomination and all the other accolades! How does it feel to be showered with so much love and acclaim?

Mike Hollingsworth: We’ve been getting a lot of accolades, but truthfully, the deadlines keep coming. Our line producer doesn’t care if you get an Emmy nomination. You don’t get three extra days. We were working on the first season of Tuca & Bertie while doing the retakes for Season 5 of Bojack. They were in different steps of the way, and that’s how we managed. We have such an amazing crew here at ShadowMachine. We are working hard on the sixth season of BoJack right now. We were fully staffed up and had people sitting up on the rafters.

Can you tell us a little bit about how you got involved with BoJack Horseman?

I actually directed the original pilot for the show back in 2013. I was the first animator who was brought on to work on an animated Netflix project. They were looking for a director who had comedy chops. I never went to school for animation. My school was doing a decade of stand-up comedy. I was a cartoonist for the L.A. Weekly and other alternative press outlets. I came in by going to film and animation festivals. So that’s how I helped give birth to this horse. Over at Netflix, we like to say it all started with a horse!

So, you are the supervising director for the whole series.

Yes, I support the whole process. I am the director of the directors, oversee the boards and the designs and everything. I directed one of the episodes, the one that was done entirely underwater (“Fish Out of Water”). The fifth season was a terrific season.

Can you tell us more about the “Free Churro” episode. Why did you decide to submit that particular one for the Emmys?

“Free Churro” was a truly stand-out episode which is basically a 20-minute monologue where Will Arnett hits it out of the ballpark. I haven’t seen anything in animation like it. We’re used to seeing everything move around so fast in TV animation, and here we had BoJack delivering a speech at his mother’s funeral. I don’t know how well Chuck Jones would have done in TV animation these days (“I like that joke, but can you do it in four frames?”). You see this character for the whole length of the episode, and just the gears are turning in his head. He’s searching through his memories in real time. It’s a straight monologue.

What was the toughest aspect of working on this particular episode?

The show creator Raphael Bob-Waksberg conceived the “Free Churro” episode, but once he birthed it, he was a bit scared of his creation. He told our director Amy Winfrey that he we wasn’t sure it was going to be captivating enough. So he told her to feel free to cut away to the organ player or to one of BoJack’s memories. We knew that Raphael’s original intent was to have this uninterrupted 20-minute monologue. Amy was fearless and didn’t want to do the cutaways. She wanted to do the 20-minute straight. Will Arnett delivers such a great performance. And then you have the perfect ending which perfectly illustrates the approach of the show. We have BoJack get so serious and say such deep, resonant stuff, and then, we end it with a silly animal joke. As Mary Poppins used to say, “A spoonful of sugar makes the medicine go down!” 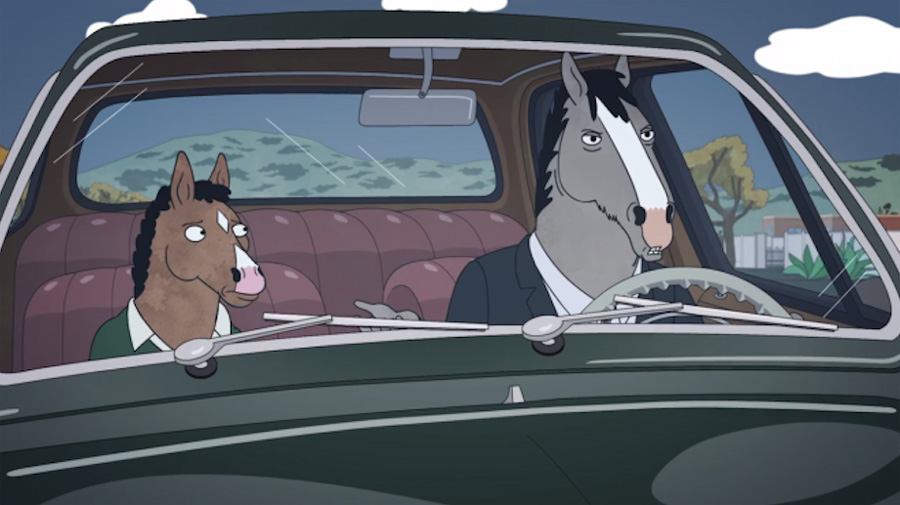 How does working on BoJack different from Tuca & Bertie?

BoJack is primarily a script-driven show, while Tuca & Bertie is storyboard-driven. We had scripts but we were given license to get in there and create the most cartoony adult show around. It takes us about 10 months to do 12 episodes. Big Star in Korea helps product the animation, and we have an amazing retake animation and comp department at ShadowMachine. We do a really thorough lighting pass. Our comp supervisor Chris Weller does an amazing job. They make our simple 2D animation look cinematic. Overall, we have about 50 people working on the show in house.

Are you as shocked as the rest of us when Netflix pulled the plug on the show last month?

Absolutely. We already were making plans for the second season. The line producer had the schedule ready. We were planning for everyone to move from Season 6 of BoJack to Season 2 of Tuca & Bertie. I feel there’s an incoming civil war between Netflix and Disney, and we were maybe a casualty of that war. Netflix didn’t own Tuca & Bertie: It’s owned by Torante. So I think there will be a civil war in Hollywood, and the border is going to be the hill where the Hollywood Sign is in the Hollywood Hills area of Santa Monica mountains. There will be a constant army pushing that border near Barham pass.

I think the headline for you is going to be Tuca & Bertie will be back, because it was a show that everyone said they loved. It was female-centric show by strong female creatives. We had a staff that was at least half women and the voice cast featured two of the biggest comedy stars working today-Ali Wong and Tiffany Haddish, and it was made by these well-known and trusted producers. So I feel we were just caught up in that civil war! 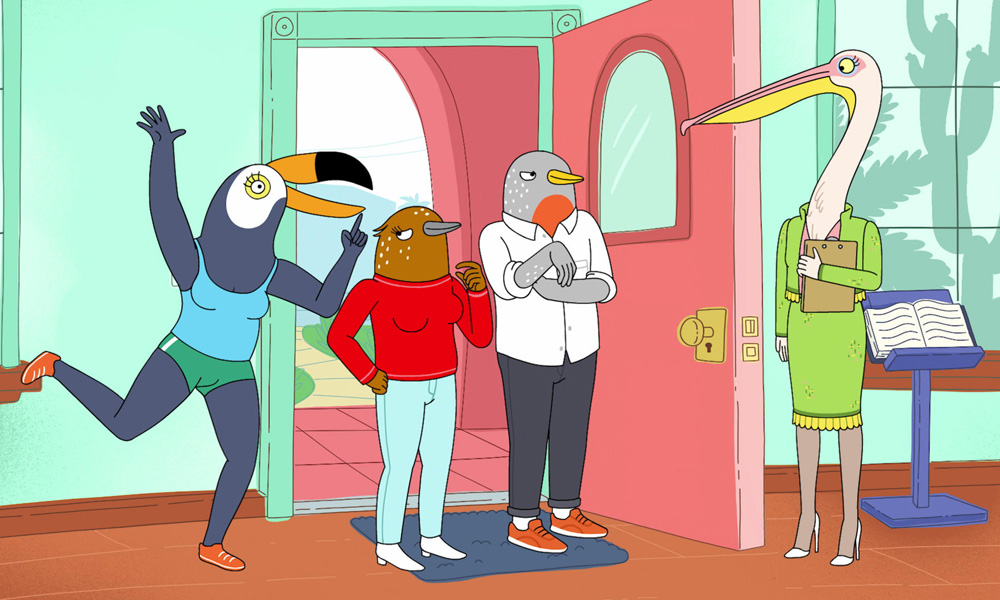 So, what’s next for you this summer?

We are finishing up the sixth season of BoJack. Then, I’ll be at the Pixelatl Festival in Mexico in September, where we’re doing a a big BoJack panel, talking about the whole history of the show. Latin America loves Bojack. I have been there four times already. I usually end up drawing BoJacks for hours and hours, which is fantastic. The show has really touched something there. Fans come up and tell me that they love that the show speaks about depression and addresses problems of mental health as these issues have a big impact in Mexico a lot. They tell me that they appreciate that the show faces those issues head on, and helps them a lot. I tell them that I hope they like the animal jokes too, because that’s what I do!

What do you think of the animation scene today?

It’s a wonderful time. There are many people buying animation these days. Between Netflix, Hulu, Amazon, Apple, Disney+ and other streaming services and the traditional networks and cables. There are so many jobs out there. We have so much trouble finding artists because everybody is spread so thin right now. It’s a wonderful time to be animator.

So how about offering some brilliant advice for those people who can’t find a job in animation?

Don’t give up. My favorite analogy is that Hollywood is like a big engine inside a train that keeps chugging forward. They need to shovel coal inside that engine, and you are that coal! This town relies on young talent, so be persistent. I remember that I had a lot of trouble finding a job too once. But once you’re in, you’re in. I remember doing all the festivals. I went to the Animation Block Party, Annecy, and I was making shorts like crazy, talking to all the other animators. Word of mouth helps. Being friendly and affable is a great thing.

You can binge watch all five seasons of BoJack Horseman and the first season of Tuca & Bertie on Netflix right now! 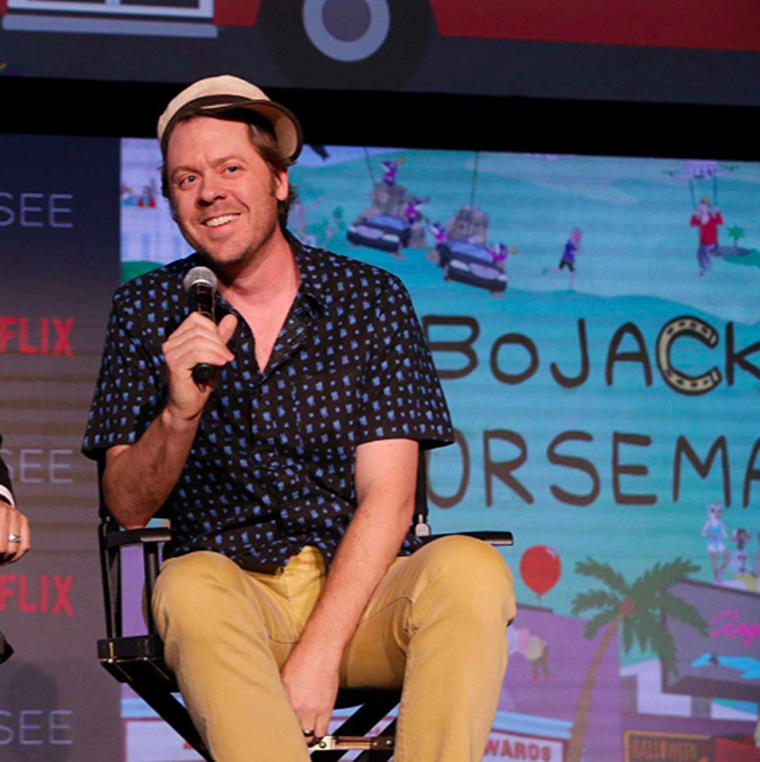