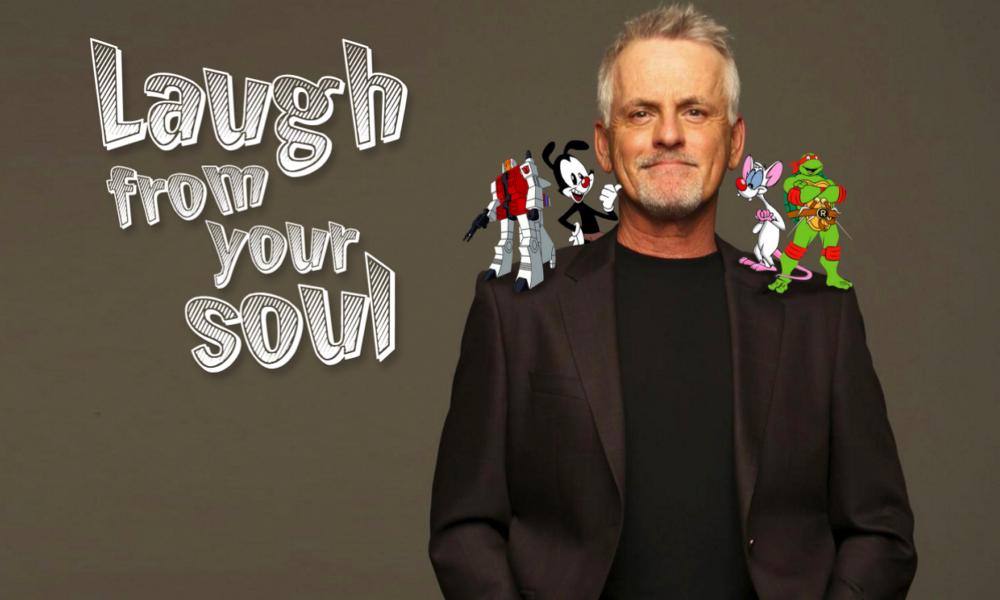 Mention the name Rob Paulsen to any real animation lover, and you’ll get an immediate smile. The talented voice actor has been behind some of the most beloved and iconic toon voices since the early 1980s. From Spike (The Land Before Time) and Carl Wheezer (Jimmy Neutron: Boy Genius) to Yakko, Dr. Otto Scratchansniff and Pinky (Animaniacs, Pinky and the Brain) and Raphael and Donatello (Teenage Mutant Ninja Turtle), the unstoppable Paulsen has voiced over 250 different characters and performed in 1,000 commercials. Winner of a Daytime Emmy and three Annie Awards, Paulsen was kind enough to spend a few minutes with us and tell us about his exciting career:

Thank you so much for taking the time to chat with us. We know you’ve been very busy as usual (appearing on Doc McStuffins, The Loud House, SpongeBob SquarePants, DuckTales, Green Eggs and Ham, Mickey Mouse Mixed-Up Adventures, etc.). Of course, we are all excited about the new Animaniacs reboot arriving later this year. What can you tell us about the project?

Rob Paulsen: Well, I can tell you it’s for Hulu, and it was slated for a fall premiere, but that was

before the pandemic, and I know everything is in flux these days. Most of the original cast is back for this new version to some extent, which also introduces some new characters. Yours truly is back as Yakko, Pinky and Otto. Tress MacNeille is my little sister Dot, Maurice LaMarche is Brain and Squit, Jess Harnell is also back as my goofy brother Wakko. Mr. Spielberg (Amblin TV and Warner Bros. Animation producing) is back on the show, which is very cool. Our new showrunner is Wellesley Wild, who you know from Family Guy and the Ted movies. He’s a wonderful fellow who is doing a hell of a job. I know that we’re in post-production now.

The Animaniacs are self-aware and know that they have been off the grid for 20 years, and that comes into play. We have great music and use a 30-piece orchestra for every half hour of the show. The music duties are now handled by the amazing Steve and Julie Bernstein, who were the proteges of Rich Stone, the remarkable composer who won a pile of Emmys for doing the music for the original show. 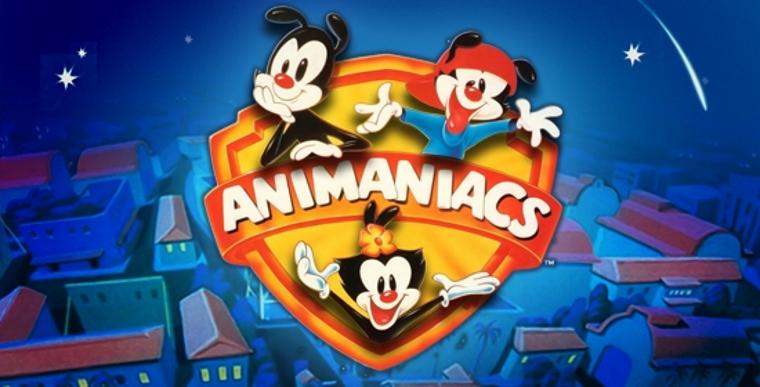 How is the new show different from and similar to the original, which has a successful run from 1993 to 1998?

As I mentioned before, the irreverent and at times subversive humor is the same. But in addition to Yakko, Otto and Pinky, new ancillary characters will be introduced, many of which I’m not aware of. We have a new showrunner and new writers, who grew up watching the original series. What I can tell you is that it is every bit as joyful and hurt-yourself-laughing funny as the original. The scripts just read really, really funny. I haven’t seen much of the animation yet, but I wouldn’t bet against Mr. Spielberg. You can tell that the kids who are writing the show are informed by the genius of the writers who worked on the first show and the creator of the show, Tom Ruegger. I don’t think it’s hyperbole to say that he did an incredible job and that the show has become an iconic part of our cultural landscape. Some incredible talents were fostered by him, and it has been pretty cool to witness it all. Well done, Tom!

So, we know a lot of voice artists have adjusted easily to working from home during the COVID era. How are you doing these days?

Well, I am working from home, and that’s one of the cool things about this gig: Nobody cares what I look like, which is absolutely wonderful for an actor — especially for an old one! I am just limited by my talent and the kindness of the people who hire me. I can record from home, and I don’t have to be in the studio with others. I really consider myself a lottery winner, and I realize how terrifically fortunate I am. That’s the truth about our business: To be able to make a living out of bringing joy and happiness to people — my God, what a lovely way to move though life.

I have found new ways to interact with my fan base. I am becoming more and more involved with social media. I’ve been doing some online autograph signing events and fundraisers for charity events. All the other Cons have been canceled this year, but Rob’s COVID-Cons are happening! I’ve also been binge watching shows like Defending Jacob, Dead To Me and Ricky Gervais’ black comedy After Life. Of course, I’m watching Rick and Morty. I did a voice for that show — Snowball, who is a doggy looking for his testicles.

What was the best career advice you ever received?

Ah, yes. My dear friend and true mentor, Alan Oppenheimer — he is a wonderful, remarkable man. He watched me get frustrated because my on-camera agent was trying to book me for a read for Hill Street Blues, and I told him I couldn’t make it as I was working on Jonny Quest in the morning and The Tick in the afternoon at that time. Here I was, working with legends like Alan, Jonathan Winters and June Foray. So Alan told me, “You have to make a decision. You are getting good at this cartoon gig and that is going to create a bit of a conflict.” My wife told me, “It’s not that you’re difficult to look at, but you’re starting to kill it at this animation gig.”

So, I am so glad that my ego was such that I listened to my friends and family who persuaded me to go to this path of not the least resistance, but the most financial reward. I am so glad I get to do what used to get me in trouble in seventh grade. It makes my soul happy every day! 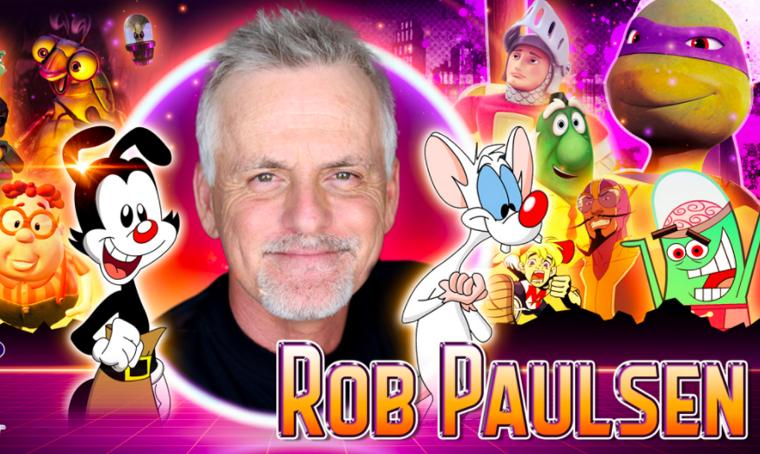 What were your first gigs in animation?

I got my first gig in animation thanks to Don Jurwich, supervising producer on G.I. Joe. (1985-86) I played Snow Job and Tripwire on that show, and I did Slingshot and Air Raid on the original Transformers series.

What are your favorite shows that you’ve worked on?

Animaniacs is the perfect example of the axiom of luck being the meeting of opportunity and preparation. I’d been a singer for decades, had created all of these character voices for myself. I’d been in animation for eight years at the time. As a singer who can sing in character, I got a foothold in animation, and having done Tiny Toon Adventures with Tom Ruegger, I told them, “If you don’t hire me for Animaniacs, you’re making a mistake!” I was right. Not only was I ready, that show literally changed my life, and for that I’ll be forever grateful to Tom Ruegger, Jean MacCurdy and Steven Spielberg. Now that I have the chance to do it again for a larger fan base, many of which are fans of the original show and are now sharing it with their children and grandchildren, I can’t quantify what that means.

On Ninja Turtles, having the chance to be the voice of Raphael would be a big deal for any actor. But to be able to get a shot at doing a different character — Donatello — for the same franchise some 25 years later for this iconic franchise. And for the new show to be equally interesting and watchable for original fans as well as new ones. To get a chance to do two versions of an iconic franchise was mind-blowing. But honestly, to be part of shows such as The Tick, Mighty Max, Biker Mice from Mars, Goof Troop, Jimmy Neutron, Fairly OddParents … come on, I am a lottery winner!

Going back to Animaniacs, why do you think that show was such a huge critical and audience hit?

Tom Ruegger and all the original writers, Steven Spielberg and all the musicians, everyone took their cues from legends such as Chuck Jones, Bob McKimson, Bob Clampett, Jay Ward and Bill Scott — shows that were purposefully written for both audiences, kids and grown-ups who got the more sophisticated jokes. They assumed that the audience got it, and they did. The proof is in the pudding. I meet people in their 30s who tell me they love Animanicas because they loved it when they first saw it when they were kids, and when they grew up, they got all the other cultural jokes. That’s what happened to me when shows like Rocky and Bullwinkle, The Flintstones and the Looney Tunes shorts. You watch them as an adult and appreciate them with an adult sensibility. It’s not a big secret. People appreciate good material. Maurice (LaMarche) and I would be the first to tell you that we don’t write ‘em and we don’t draw ‘em, but when it works, it’s nothing short of magical and utterly timeless. I’m so proud to be part of something that is able to unleash this much happy to an existing fan base.

OK, now the million dollar question: What do you think is the secret of your success in the voice business?

I never take myself too seriously. But I take my work seriously and work very hard to be funny and clever and not to limit myself. I am always looking to learn from anyone. That’s why I love animation, because it’s about the characters: Voice acting is a small V and a large A because it’s about breathing life into these characters. When it works with the artistic side of things is right, it’s magical and wonderful to be part of.

I also feel like I owe it to myself and the producers who were willing to hire me, and creators and the fans, to be better every day. At 63, I am better than I was when I was 32, and I hope I am better when I’m 65 than I am today! And I’ll stop when I’m dead. I also know that a high tide raises all boats, and I have been surrounded by the best of the best, you name it, including Mel Blanc, my amazing colleagues Billy West, Joe Dimaggio, Tress MacNeille, Tara Strong, Maurice LaMarche, Dee Bradley Baker, Corey Baker, Jess Harnell, Kevin Michael Richardson, Peter Cullen, B.J. Ward, Alan Oppenheimer, Dick Beals, Carol Channing, Rip Taylor, Pam Adlon, Kevin Conroy, Mark Hamill … I mean, come on! Shame on me if I wasn’t successful. I’ve had my hand held by the best. I am better because of the people I work with.

Final one for you: Who is your favorite animated character?

I don’t know its name, but it’s always the next one. I never take my success for granted. The reason is I hope I am always working: It is always about getting better, not resting on your laurels, and not believing you’re as good as people tell you you are! Thank you so much for listening to me!

Let me leave you with this, which is how I sign off from my podcasts, and it’s more relevant now than ever now: What we do is all about being joyful in the creative process. It’s important to laugh at least once a day for your soul. Laughter is the best medicine, because you can’t O.D. on it and the refills are free!

You can find out more about the amazing Mr. Paulsen and check out his fun podcasts and videos at robpaulsenlive.com