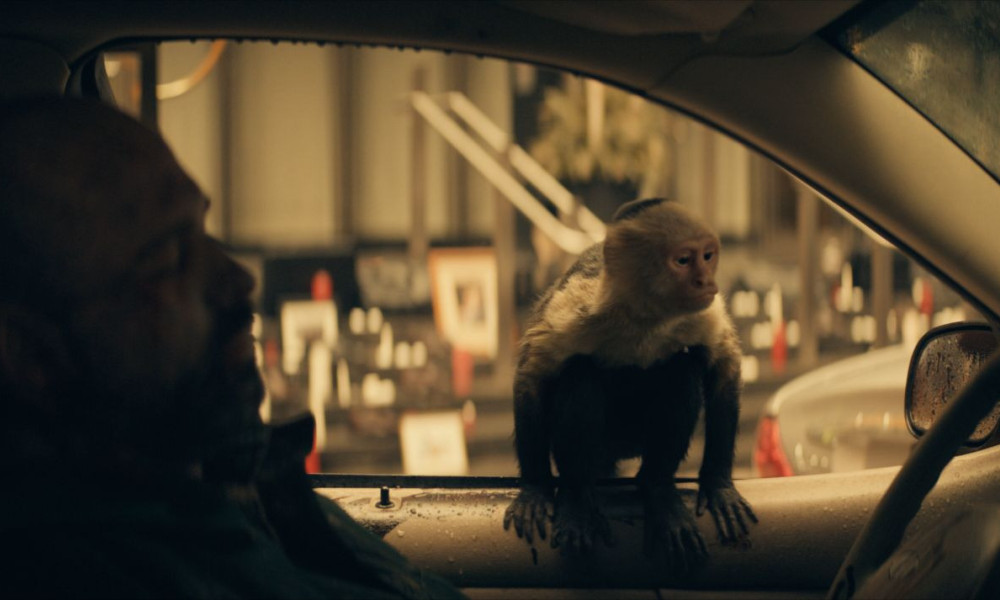 Although Eliza Clark’s adaptation of Brian K. Vaughan and Pia Guerra’s intriguing comic book Y: The Last Man was canceled after one season on FX on Hulu, the post-apocalyptic drama left viewers with many memorable images and VFX highlights, courtesy of the team at ILM. We had a chance to catch up with the show’s animation supervisor Michael Beaulieu (Pirates of the Caribbean: Dead Men Tell No Tales, Wonder Woman, Star Wars Episode VIII, Space Jam: A New Legacy), who was kind enough to discuss his work on the show’s digital monkey, Ampersand.

Animation Magazine: Can you tell us a little bit about how you got involved with the series?

Michael Beaulieu: Over the years, some of the projects I was part of featured a hyper-real aesthetic to the animation, from pushing Spider-Man towards a more gritty style in The Amazing Spider-Man films, to half-dead ghost pirates in Pirates of the Caribbean, or maybe more to the point — spending some time supervising early test animation on a well-known CG monkey in Disney’s Aladdin. So joining a show like Y: The Last Man and creating a capuchin monkey that was intended to look as if it were real and on set with the actors, sounded like a good fit and a fun challenge. 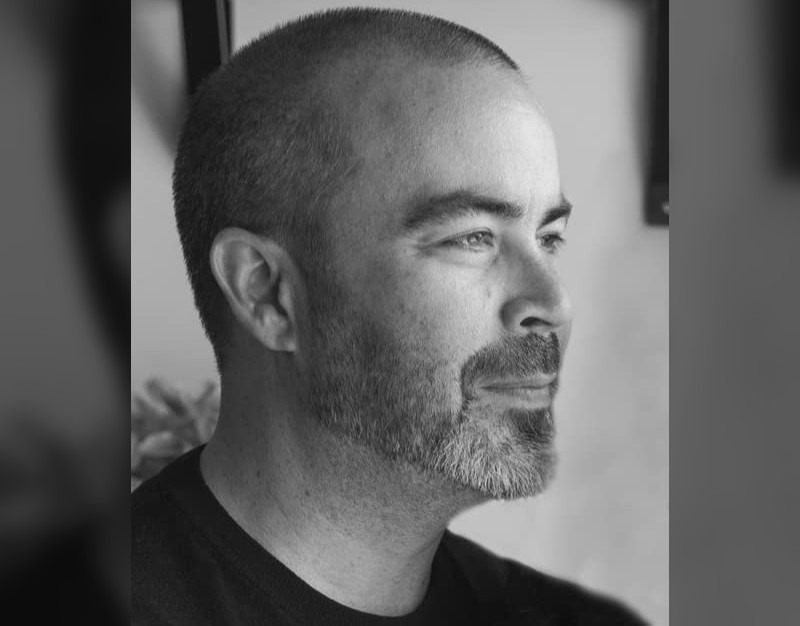 How many VFX shots did ILM create for Y: The Last Man?

We provided VFX for 125 shots on the series. Our work consisted mainly of creating Ampersand, Yorick’s pet capuchin, for the series. [Yorick is played by Ben Schnetzer in the show.]

How many people worked on this show at ILM?

Overall, 65 people worked on the project across all departments, peaking at around 25-30 people at any one time. The animation team was rather small, with nine animators in total over the course of the show, but mainly one lead and a core team of two or three for the duration of the show. 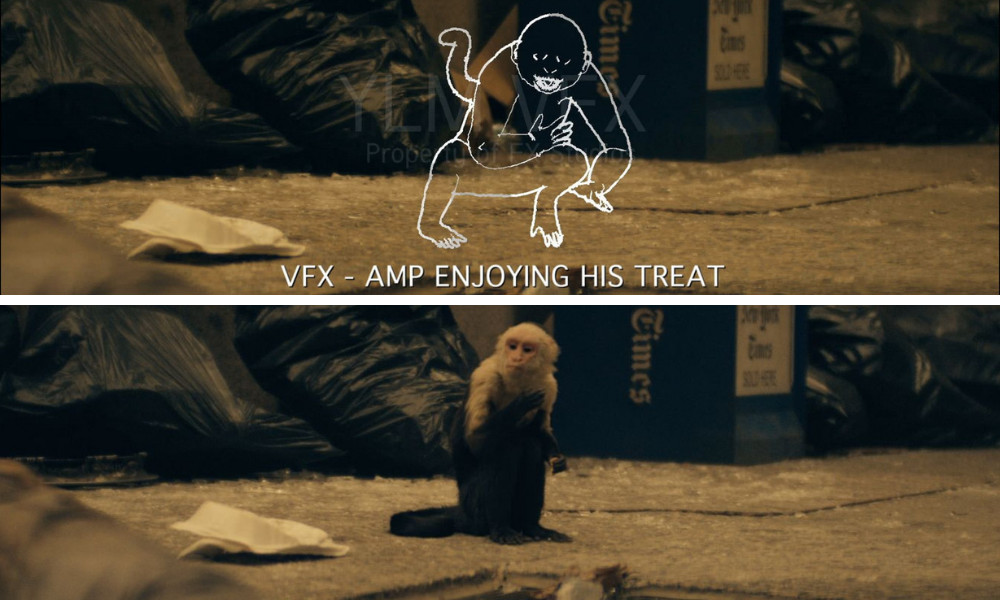 What was the highlight of this job for you?

Collaborating with Stephen Pugh (overall VFX supervisor and VFX producer) was amazing. The trust he gave us allowed for some cool creative input that really paid off. Our animation team really blossomed in these conditions. Internally we had a great team of artists across all the disciplines who had fun putting Ampersand on screen, and it was a pleasure to witness this kind of mastery.

Working with our ILM VFX supervisor, Bruno Baron, we were able to focus on the performance of Amp and really do everything we could to bring him to life, knowing that Bruno would make sure Ampersand looked great in the final shots. It really was a team effort putting Amp on screen and everyone was able to put their best into the project. 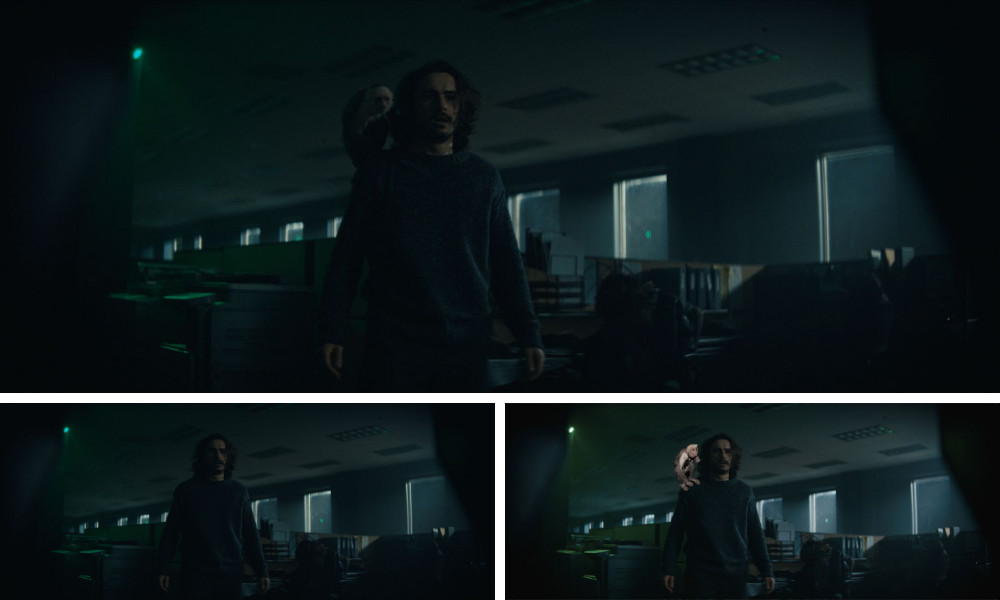 Can you tell us a bit about the challenges and rewards of creating the amazing capuchin monkey?

If you google “Y: The Last Man comic-book cover,” your first results will show some really cool poses of Ampersand on Yorick’s shoulders. So we knew from the start that Ampersand would have that kind of very challenging interaction with Ben, and it’s really dependent on how these scenes get shot. We also knew Ben wouldn’t have much to interact with on set.

Getting the actor’s eyelines to match up with where we’d be placing Ampersand was tough, but we got some great performances from the main actors which allowed us to tie Amp’s movements into their mannerisms. A tiny shift in Ben’s shoulder could become a reaction to Amp moving around, or a twitch in someone’s hand could be a reaction to Amp brushing up against them. We were always on the lookout for anything in the performances that could merge with how we were animating Amp to set him in the scene. When we first saw the final comp images of Amp inside a taxi cab curiously batting a hula-girl on the dash, we knew this was going to be a fun project to be a part of.

What kind of research did you do for this assignment?

First order of business was to get up to speed with the source material, especially with Ampersand and what would be expected by the fans of the graphic novel. Since the goal was to create a fully photoreal capuchin monkey, we had to research every aspect of his look, as well as his behavior. Before we even set down a keyframe we built an extensive reference library of capuchin footage and other similar monkeys. Pulling from that library, we were able to find a real-world guide for Amp’s movement for virtually any situation. There was always a fine line between getting Amp to do real monkey things, but also what was necessary for the scene.

The real challenge was to make Amp not appear to be performing, but simply behaving, as you would expect a real monkey to do. If it felt like Amp’s movements were too staged, too human-like, or he was hitting his marks too perfectly, it would break the illusion. 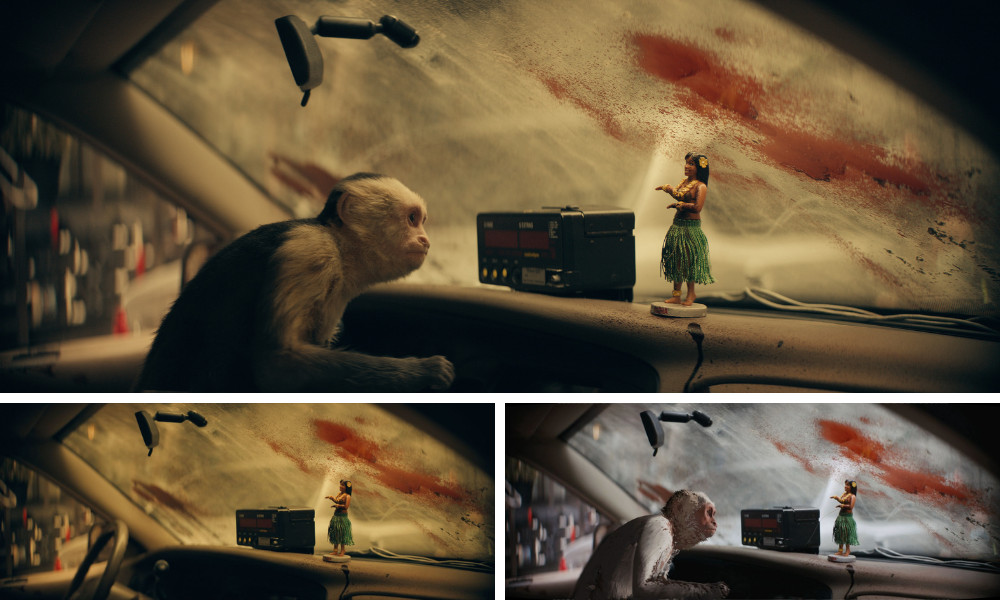 digital animals you had worked on?

On some past shows, we’d be creating creatures that are more rooted in fantasy; imagined beasts and not anything recognizable. For Ampersand, he’s meant to be a real monkey and behave in a way that people are familiar with and can immediately reference against something that exists. So the margin for error was much thinner when trying to nail his movement and characteristics. If he moved in a way that wasn’t consistent with a capuchin’s natural physics, it would be enough to break the audience’s belief that he’s a real monkey on set with the actors.

In fact, some have commented that they weren’t sure which shots were using a CG Ampersand and which were using the monkey on set. The thing is, Amp is 100 percent CG. There was never a real monkey on set. So, we took that as a sign that the work was going in the right direction.

What are some of the fun moments you recall when you look back on the experience?

One funny moment was when we were informed that the Humane Society was not going to sign-off on the show, because none of their representatives were present when we were filming with the monkey. We (ILM) couldn’t think of a higher compliment for our work that animal experts, who monitor the welfare of animals on set, believed that Amp was a real monkey on location with the actors and not a CG creation. It was a very proud moment for us across the entire team!

Y: The Last Man is available to stream in the U.S. through FX on Hulu. Viewers in the U.K. can watch episodes on Disney+.