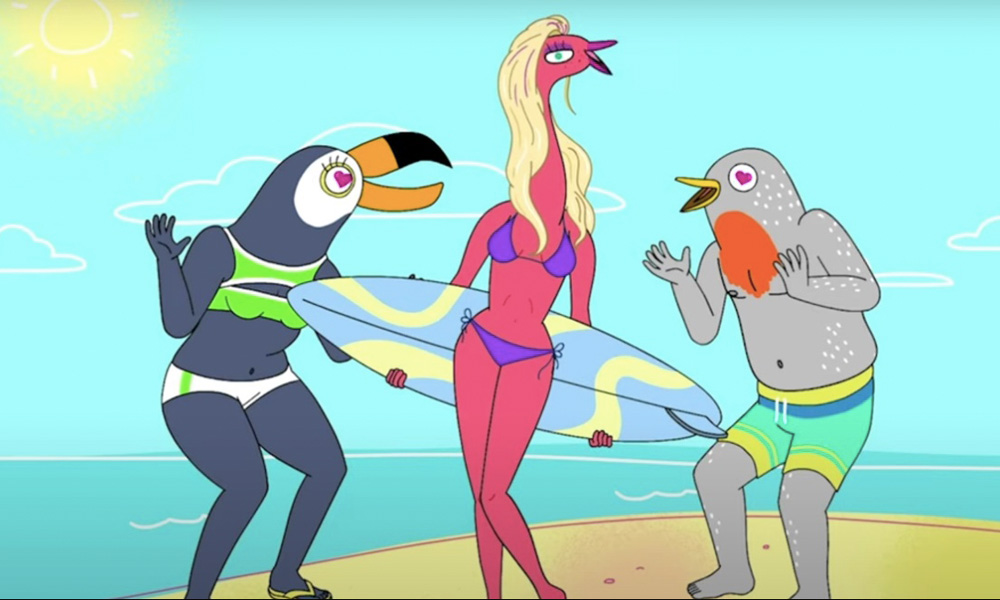 Fans of Lisa Hanawalt‘s acclaimed animated series Tuca & Bertie were delighted when Adult Swim picked up the show after it was inexplicably dropped by Netflix after its first season. The show, which takes a charming look at the friendship between two 30something friends/birds (voiced by Tiffany Haddish and Ali Wong), will join the Adult Swim lineup on June 13. The 10-episode second season will see Bertie trying to excavate her “inner ghouls” with the help of a therapist, while Tuca “prefers to stuff hers behind the toilet” and Speckle (Steven Yeun) tries to keep his sanity while building a new house. We had the chance to catch up with the hugely gifted and always charming Hanawalt during a recent phone interview:

Animag: So, first of all, congrats on the return of your amazing show. Tell us what was going on in your mind as you went through the ups and downs of creating an acclaimed series and then seeing it cancelled and then revived in such a short period?

Lisa Hanawalt: It’s funny. I still don’t fully believe that the show is coming back and that the good news is real. We found out about Adult Swim picking it up a year ago. We got together with our writer’s room and started to piece together the season. I already had some ideas about what we were going to do if we had this opportunity, so we really hit the ground running. We all expected the show to continue on Netflix, so I think it was definitely surprising. I did not expect that decision. But things like that happen a lot in this industry due to forces outside your control [laughs].

I wish I could tell you what they were thinking. I will say it was really nice to see people speaking up online about how much they loved the show. That was very cathartic to me to hear. That drum beat of people saying they wanted the show to be saved really helped. I am so thankful to our fans. I think we’ll also get a lot of new fans this time around as well. 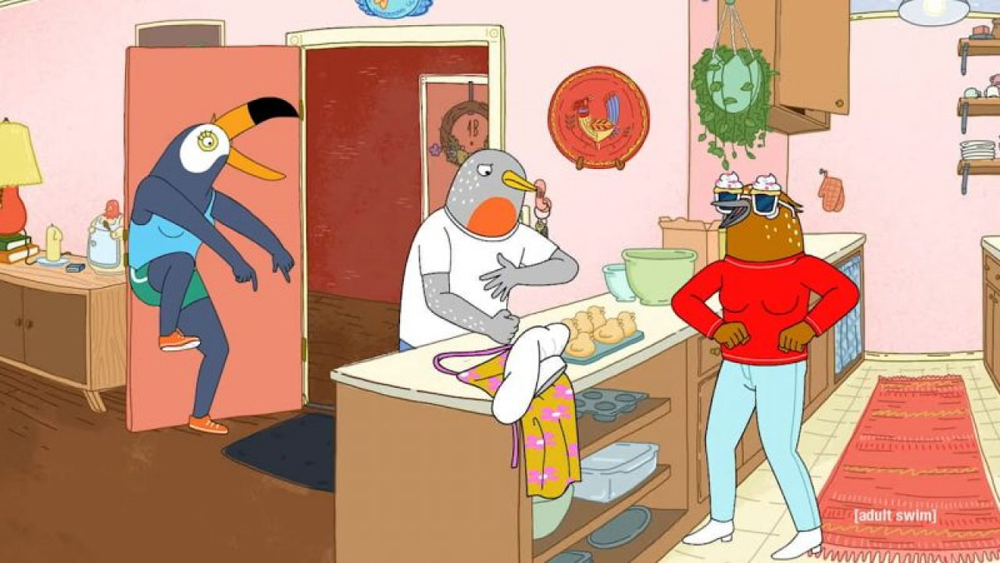 What is your writing staff like for this second season?

Including me, we have about six writers on the show this season. We have Shauna McGarry and Gonzalo Cordova back from the first season, and me and Raphael [Bob-Waksberg]. Then, there’s Samantha Irby, who is a fantastic author, and Chikodili Agwuna, who co-wrote an episode. It’s a pretty small room because we did our writers’ room via Zoom, and it was a pretty intimate group.

Is anything different about the new season now that it’s on Adult Swim?

There’s nothing really different. Fans of the show will be really pleased about how it really continues what they like about the first season. The characters continue their stories and we also have some new stories. People who are coming to the show fresh will feel like it’s a good introduction to the world of Tuca & Bertie as well. It’s really nice to be at Adult Swim because they really understand animation and the whole process. I think we had a lot of trust, and they had seen the first season and had liked it and knew exactly what they were getting and they wanted it. It felt like a great creative partnership between us.

Is ShadowMachine still producing the animation?

Yes, ShadowMachine is still doing it. We have a lot of the same animators and much of the same team the first season. Our supervising director is Aaron Long, who worked on the first season as well. He did our opening credits which everyone knows and loves. The show is still art directed by Alison Dubois — a really talented group of people. Big Star does the animation production in South Korea.

Can you give us a sneak peek of the second season?

Let’s see … What are our girls up to? Tuca is trying to find love. She is ready for a relationship and she’s looking — whether she’ll find it or not, we’ll have to see. Bertie is going to therapy for the first time and that is unearthing all these other issues that she’s trying to confront. There’s so much that happens this season. They go on some crazy adventures.

Was working on the second season of the show easier in terms of coming up with story ideas?

I always worry that I run out of ideas, and then I never do. What happens is that I actually don’t have enough room within a season to do all the stuff that I thought of. I had this whole entire thing that I wanted to do with Bertie that I didn’t have enough time to get to this season, so maybe next time. It didn’t feel difficult. Sometimes I feel these characters write themselves, in a way. 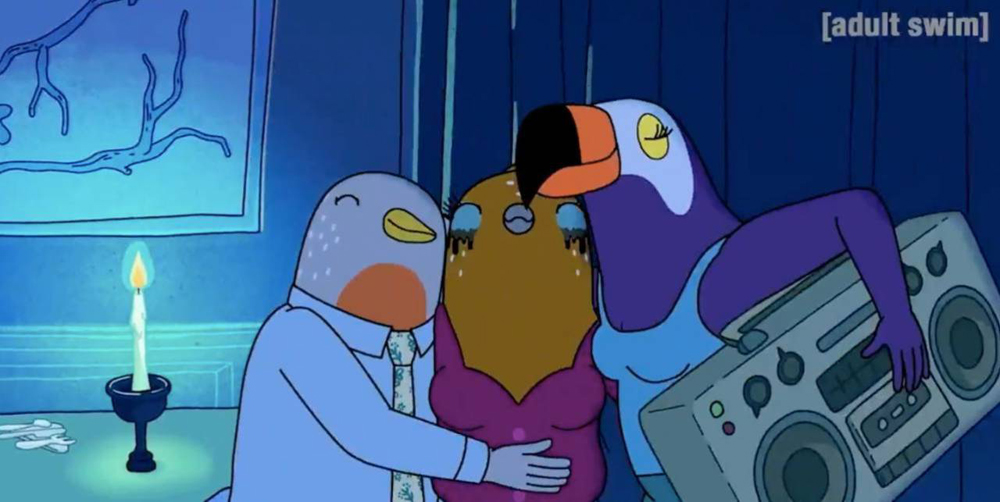 What was the toughest part of working on Season 2?

What was it? Physically, there were some days that I felt really depressed about the pandemic, like everyone else. It was a little bit hard to get myself out of a funk and work and be creative. Writing an episode can be very difficult. I know I said earlier that the characters write themselves, but they don’t. They don’t actually. I know what they would do in any given situation, but actually writing the lines and making sure everything flows and the story tracks as a story is so much work. It was difficult to work through everything that was happening, as much as I was so grateful to have that work.

Which episode generated the most response from fans the first season?

I think episode nine [the episode in which we learn about Bertie’s sexual assault when she was younger] was definitely the heavy hitter. It brought up a lot of things for many people. It was a very challenging one to work on because I wanted to be very sensitive to how the audience would feel watching it. I feel very sad when I watch it, but also feel uplifted in the end. So, it was very personal to a lot of the people who worked on it. I appreciate that we had an opportunity to make something like that. People had some emotional reaction to it. I also love it when people tell me they just started going to therapy for the first time because of our show! I hope they found a good shrink and that it goes well for them. But it’s nice that people relate to these characters on that level.

Can you give us the scoop on the new season’s guest voices?

We have a bunch of exciting voices, and I’m not sure if I’m allowed to reveal them all at this point. I can tell you that Pamela Adlon pays a therapist, and she’s amazing. I have been a huge fan of hers for years. We are going to meet some of both Tuca’s and Bertie’s families, so we have some great voices there. Every episode has some fantastic actors.

Tell us about your year of working through a pandemic.

We did everything remotely and it went surprisingly well. It went very smoothly because we all know each other for the most part. I felt guilty for a moment for making people work during a pandemic, especially when we were also having those wildfires [in California]. It felt nuts that we were also working during a time when the world was burning. But I know I was grateful to have a distraction. It was nice to see people’s faces on Zoom every day and process what was happening and the focus on the silly bird show which kind of cheered us up. It was crazy but it worked.

What did you learn from the first season that you were able to use in the second season?

Sometimes during the first season I didn’t know what I wanted tonally. I knew that I generally wanted it to be an uplifting show. Like the second episode of the first series ends on a sad note: Bertie is burned out working. She got what she wanted, but she’s still sad. And there was a little bit of a question whether that was the right tone. And now I feel a lot more comfortable having some sad parts of the show mixed in with how silly it is. Trusting myself to know what the balance is feels good. It’s more about confidence, too — i.e., I liked what I did the first season, so let’s lean into that. 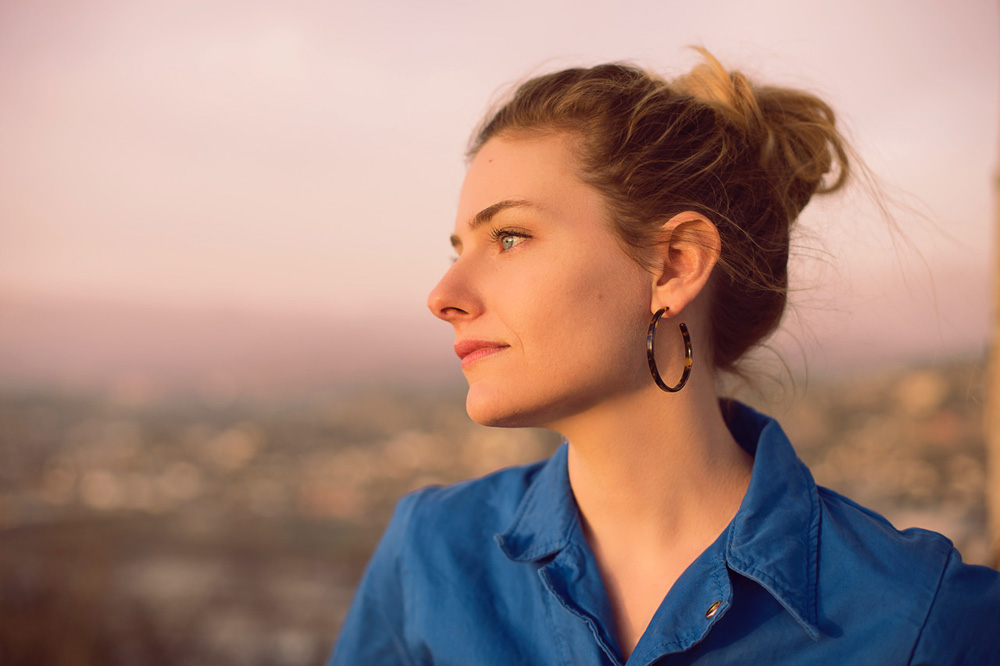 Do you think that it was ironic that your show ended up on Adult Swim, which used to have this bad rep for being totally white male-dominated? But I guess things have changed drastically there, too.

I do think about how I am making a show at just the right moment in history where some doors opened finally to non-white male creators … and I just hope that those doors stay open and it’s not just a phase, and our stories are seen as creative and vital as those created by white men — who have created many wonderful things, but there are different audiences out there. Sometimes I hear back from people who say, “Wow, I didn’t even know that I liked adult animation and thought it wasn’t for me. Then, I saw your show and it really clicked with me.” That’s very important to me.

Which animated shows were you watching when you were growing up that had a big impact on you?

I was really into The Simpsons and Ren & Stimpy. I loved Disney movies, especially The Lion King. I also watched Liquid Television on MTV. I loved Daria. That show was so good. I started drawing comics when I was seven. I would read the Sunday funnies. I didn’t know I wanted to get into TV at all until my friend Raphael [Bob-Waksberg[ asked me to work on his show BoJack Horseman. After years of working on BoJack, when he asked me if I wanted to have my own show, at that point I was ready to have my own ideas for my own show. It just went from there. It was kind of a serendipitous thing.

What do you hope audiences will take away from the new season of Tuca & Bertie?

I hope audiences will think it’s fun. They will want to continue to hang with these characters. There are some interesting things there about relationships, trying to fix yourself when you are having emotional problems, there is some sort of societal comment that you can pick up on. But that’s not a directive really. It’s just whatever books I’ve been reading or thoughts that have been tumbling around in my head, I tend to put in the show. I flip back and forth between fiction and nonfiction. For example, I read this book called Evicted by Matthew Desmond that really stuck with me.

What’s the advice you usually offer creative people who want to get into animation?