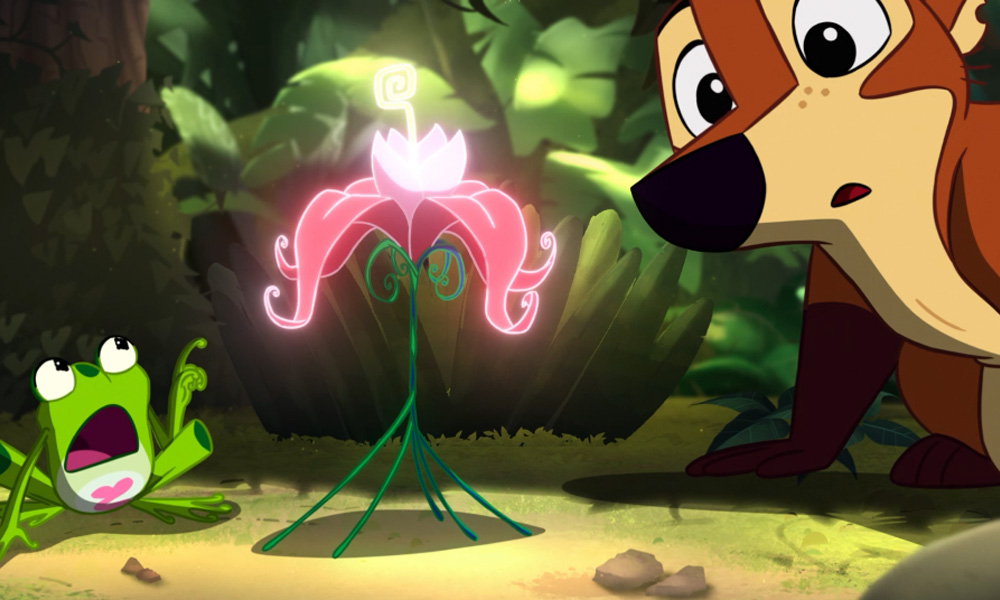 This past Friday, U.S. audiences were treated to director Rodrigo Perez-Castro‘s 2D-animated feature Koati, which stars and is exec produced by Sofía Vergara. The colorful family feature tells the story of three unlikely heroes — a free-spirited coati, a fearless monarch butterfly and a hyperactive glass frog — who embark on a journey to stop a wicked coral snake from destroying their beautiful natural homeland. We caught up with Perez-Castro and the film’s creator and producer Anabella Sosa-Dovarganes (owner of animation and post-production studio Upstairs) to find out more about their labor of love, which took eight years to bring to the screen. Here is what they told us:

Animag: Can you tell us a little bit about the history of the movie?

Rodrigo Perez-Castro: Koati started as the brainchild of our producer Anabella Sosa. She had been looking to create an animated project that celebrated the natural world of Latin America, in particular, its very diverse wildlife, which is not as well known in the rest of the world. Anabella zeroed in on a few very specific species that would highlight the project — species that represented different classic archetypes, including our hero the coati. I was approached by Anabella in late 2014 to help create a vision for the film, build a story and help develop these characters and many others that later became intricate parts of what evolved into the movie we have today.

What attracted you to this project?

Rodrigo: By the time Anabella approached me, I had been working as a story artist for many years as well as a head of story for big mainstream projects, many of them sequels for very well-known franchises. I had been offered directing projects before, but I was craving desperately to be part of something original, something new, to help build something from scratch. At the same time, my animation career up until that point had taken place in the U.S. and Canada. I had left my home country of Mexico, when I was 20 to pursue my dreams of working in animated films. because they really didn’t have much of an animation industry back then. But for a while I wanted to give back to my country in some way, to do something that could bring me closer to home. Anabella’s proposal satisfied both my creative need to help create something original and my desire to reconnect with my roots and home land. It was incredible for me to discover that Latin America, and more specifically, Mexico, is now fertile ground for very passionate animation talent. The landscape had changed quite a lot down there since I had left 20 years prior.

Where is the animation produced and how many people worked on the feature?

Anabella Sosa-Dovarganes: The animation company in charge of the production of Koati was Upstairs, with offices in Miami and Mexico. Upstairs had a team of over 1,600 animators and digital artists collaborating from Mexico, U.S.A., Canada, Argentina, Venezuela, France, Denmark, Philippines, Vietnam, Cambodia, Spain, Madrid and Honduras.

Since our goal was to make this film as traditionally hand-drawn animated as possible, we literally had to cherry pick the best talent available and create a production pipeline that would enable us to collaborate with each team remotely while still maintaining same quality and consistency in all of our scenes regardless of which team was animating film. The fact that both me and Rodrigo are bilingual made the work much easier because we were able to communicate directly with talent, and therefore have access to a larger pool of amazing talent.

Which animation tools were used to create the animation?

Rodrigo: From the very beginning, Anabella and I had a great desire to make this film as traditionally hand-drawn animated as possible, and we created a very flexible, hybrid pipeline that allowed our creative talent to work with whichever tools they were the most comfortable with.

We had an “artist process first” approach to this that allowed people like our incredible production designer, Simon Varela, who preferred to draw on paper and charcoal, to do his thing as he wanted. Same with the rest of our artists. We let them use whichever program they felt most comfortable with to draw and animate, for some it was TVPaint, for some it was Toon Boom. As long as the final result reflected that unified, hand-crafted vision we were going for, the tools were always secondary.

In your opinion, what are some of the standout qualities of the movie?

Rodrigo: The most obvious one is the look of the film. The fact that it used techniques that create a look that can seem familiar for some of us who grew up with hand-drawn animated films, while also feeling very fresh because of its unique visual language and aesthetic. This look stands out from many animated family films of today, which have a very uniform, computer animated aesthetic.

Tonally, our film also has its own unique flavor. Yes, it is an action-adventure-comedy, but we also pushed for a certain poetic vision in the way we visually portray this world. A magic realism that gives it a very particular Latin American essence. The characters and storyline are inspired by the hopes and dreams, challenges and struggles of us, the Latin American people of today. We touched on power dynamics and social struggles that are very particular to the region, which makes it very authentic. We also didn’t shy away from exploring the darker and bittersweet side of the uncontrollable power of the forces of nature, the cycle of death and rebirth, which are an essential part of any good myth.

Anabella: For me, the animation, production design and art direction of this film is outstanding and very different from any other movie. I think the beauty lies on the fact that we carefully wanted to maintain a 2D look while still capitalizing and maximizing the amazing new digital and post-production tools available to make this film look contemporary and high end while preserving the craftsmanship of 2D hand-drawn animation.

The score and the seven original songs of this movie are incredible. They were produced by Marc Anthony and Julio Reyes Copello and they are a celebration of the Latin rhythms and culture which I think audience will love.

Looking back, what were some of the toughest parts of the experience of bringing a 2D-animated feature to the screen?

Rodrigo: It’s often said that making an animated film is always like running a marathon, and that’s absolutely true. One has to persevere and keep the inspiration alive and pass on that inspiration to your team, and do so for a long period of time. One thing I learned during this process is that making an independent animated film is like running that marathon but with obstacles on the road. Now add a global pandemic into the mix, studios going into lockdown, everyone mostly working from home for the last year of the production — it made for a very challenging scenario. To see our very bare bones operation finding the light at the end of the tunnel after so many challenges it’s incredibly satisfying and a testament to the courage and perseverance of everyone in our team.

Anabella: For me there were three major challenges:

What do you hope audiences will take away from this family feature?

Rodrigo: The biggest hope is that the audience will fall in love with our characters the way we did. That they will laugh and cry through the journey, while being awestruck by the beauty of their world. Which brings us back to the initial dream Anabella had of exposing worldwide audiences to a fascinating and rich biodiverse world that exists beyond the story on the screen — a world that needs to be protected. Who better to protect it than the children that will watch this film?

Anabella: No matter where you come from, anyone can be a hero of their own story,
Koati is a gift from Latin America to the world. And we hope audiences fall in love with our world with nature and are inspired by our characters.

What are the release plans for the movie?

Anabella: Koati was released in the U.S. on October 15. It will be released in Latin America on November 25 and the first quarter of 2022 in the rest of the word.

What is the best advice you can give animation hopefuls who want to have a rewarding career?

Rodrigo: Take risks and draw inspirations from all sorts of sources. Look beyond animation, look into live action, theatre, opera and literature. Enrich yourselves and, most importantly, enrich your own lives. I always tell students and people starting their career in animation to get out of their shells, fall in love, break your heart, allow yourself to experience joy but also sadness and the sorrows of loss. In other words: live. Only from life can you draw sincere inspiration as a storyteller and as an artist. When you are drawing or creating, turn off your phones. Allow yourself to experience being inside the creative “zone” without looking for “social media likes.” Do it for the fun of it, like you used to when you were a kid.

More information and tickets for participating theaters available at www.koati.com.