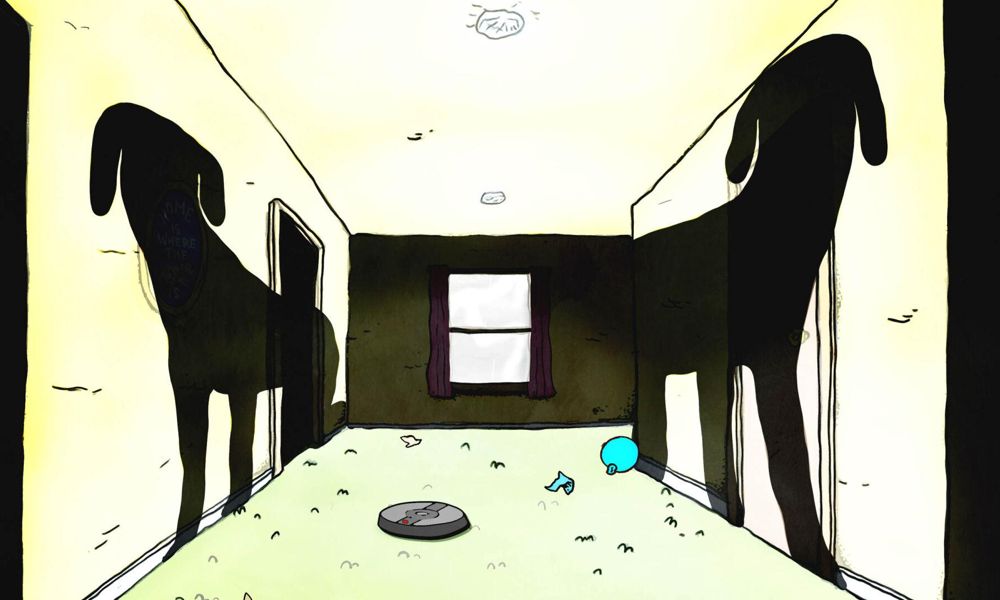 This past month, Joe Cappa’s fascinating new short Ghost Dogs received a lot of attention when it was nominated for a Best Animated Short prize at Sundance. Cappa, who is a relative newcomer to the animation world, answered a few of our questions about his highly original short, which centers on a family’s new pet dog who’s haunted by the ghosts of all the other canines who lived in the house at one point. 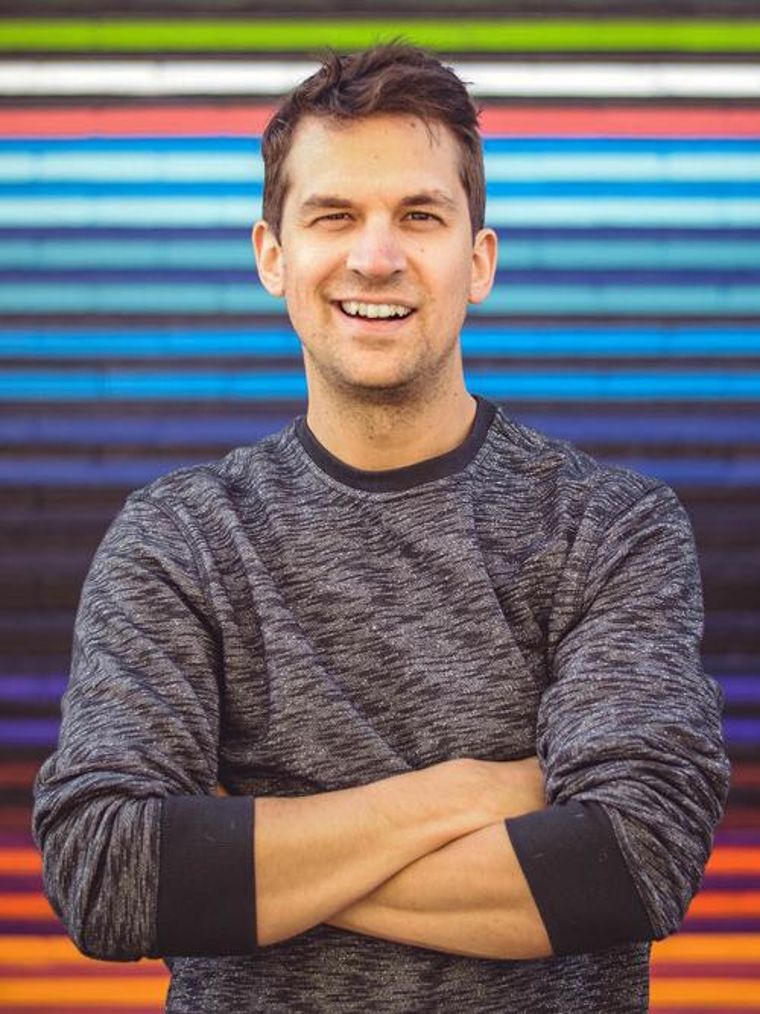 Can you tell us the story behind Ghost Dogs? How did you get inspired to create this short?

Joe Cappa: I drew these dog characters with human arms and legs for an art show like a decade ago. At the time I hadn’t dabbled in fine art for years so the pieces were terrible, but I thought the characters were funny looking. About seven years later I purchased a drawing tablet to teach myself frame-by-frame animation on the computer. The first thing I animated were the humanoid dog characters crawling around on the floor, and I thought it was really interesting to watch!

So, I started storyboarding out a film with these ghost dogs. I was just building out the story with each panel of the storyboard. I knew I was making a horror film, and I knew one of the biggest horror tropes is when the family’s dog appears to be reacting to something unseen by the people in the house. It was then that I realized the story could be about a rescue pup being haunted by its owners’ deceased pets. I couldn’t believe a ghost story about dead pets had not been done before. It was then that I felt an urgent need to share this idea with the world. 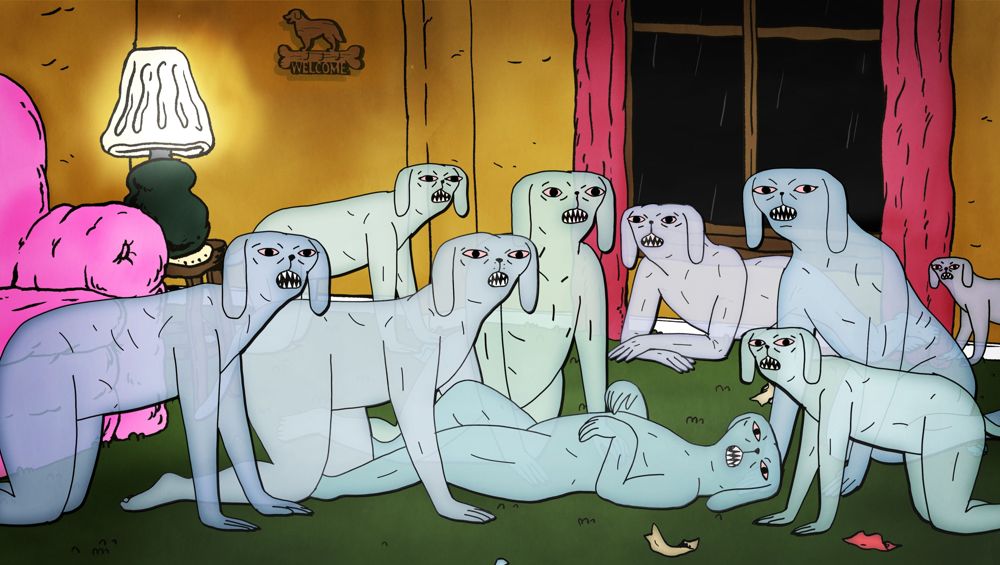 You created this short during the COVID pandemic … How long did it take to make and which animation tools did you use to make it?

Yeah, I started Ghost Dogs in 2018 with an upgraded Wacom tablet and the Adobe Suite. Since this was my first animated short I thought I could get it done in five months or so. Obviously that didn’t happen, so I had to find time to work on the short film between other gigs so I didn’t go broke. Two years later and I was nowhere near completion. Then the pandemic arrived and everything shut down. It was a weird time for me, because I was obviously very concerned about the state of the world, but I now had all this time stuck at home to complete Ghost Dogs. It’s amazing what you can accomplish with little to no distractions.

Who are some of your animation influences?

To be honest, I’m not a huge cartoon watcher. For me, the animations that inspire my work are Mike Judge creations and the internet humor of Marc M and Jarrad Wright. Their timing and reserved use of animation fascinates me. I think they are not so much masters of animation, but masters of using animation as a form of comedy and relatability. At least for me personally. If I had to choose an animated hero I guess I would say Finn and Jake. I think there’s a strong movement to have meaningful messages in films and shows right now, especially in children’s shows. Adventure Time does a great job of never being too on the nose about it. I think that show just teaches kids to be unique people, and the rest falls into place.

I was doing video work for an ad agency in Oklahoma City. I was predominantly shooting and editing but I also had to learn motion graphics for commercials and web content. I enjoyed trying to make the motion and flow of objects look as professional as possible. I knew I wanted to do something more artful with it though. So I quit my job in 2013 and moved to Denver, Colorado to do my own thing. I was hired by a band to make a music video, and that was the first time I really “animated” something. I spent the next month in a dark basement shooting stop motion construction paper characters. By the end of that process I was amazed to discover I didn’t go crazy! I loved what I made and I was just excited to work on the next thing. That’s when I knew I wanted to focus on animation as a career.

Have you experienced a ghost dog in your own life?

For as long as I can remember I’ve had recurring dreams where I’m trapped in a haunted house. It’s such a vibe. The house is usually some place that I remember living in, but strangely foreign to me. There’s always a section of the house that just feels odd, like a static electricity feeling in the rooms. The need to recreate these haunted dreams in my work has really been the catalyst for the whole Ghost Dogs concept. Now that being said, I truly believe I was visited by a ghost in my last apartment (while working on the film). I came home to my dog wigging out. I’d never seen her so scared. Like she wouldn’t even leave the bedroom, and was even too scared to go for a “WALK!” Which has never happened in her entire life. Dogs love walks, right? Anyway, that’s when I noticed my record player was continuously spinning at the end of an album. I hadn’t listened to that record player in like a month. 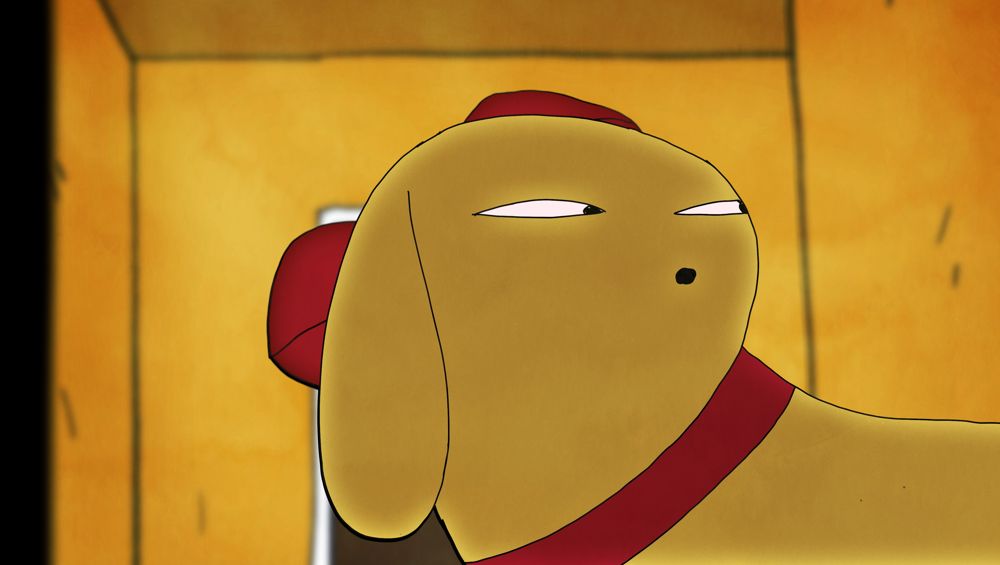 What made you make the jump from video production and VFX to the animated shorts universe?

Yeah, I went to school for film and envisioned myself being a DP on film sets, and then obviously I got into advertising after graduating. I pretty much abandoned that dream completely, because I A) didn’t have the initiative and B) wasn’t inspired by anyone around me.  Anyway there’s a guy in Oklahoma named Mickey Reece who was making super, super low budget films with his friends. He had made something like 20 features at the time, which is just insane. I finally checked out one of his films because he posted it to YouTube and couldn’t believe how well written it was. It looked like crap, but it was clear Mickey was very talented and had this irrational passion to make movies. I sought him out, and shot his first Kickstarter film Mickey Reece’s Alien. Then went on to shoot Strike Dear Mistress and Cure His Heart. I think those experiences gave me the confidence to try my own hand at directing something.

The only problem is, I’m introverted and don’t want to beg people to work on my movies. Animation allows me to tell stories I want to tell, exactly the way I want to tell them with seemingly no budget. It’s an insane medium for a storyteller. I’m a half-way decent drawer, so I thought, why not chase the dream?

What was the most memorable reaction you got from your short?

Ghost Dogs premiered at the 2020 Fantastic Fest, which was a huge accomplishment for me and my producer JW Hallford. Because everything was virtual, organizers created a platform where people could live chat while watching the films, which is a unique experience for a filmmaker to see. I so wish I could watch Ghost Dogs with a live audience to gauge people’s reactions. I hope someday that will be a possibility. Anyway, there’s a pretty good joke in the film and it was fun to see the chat feed when all the “hahahaha”s came in! 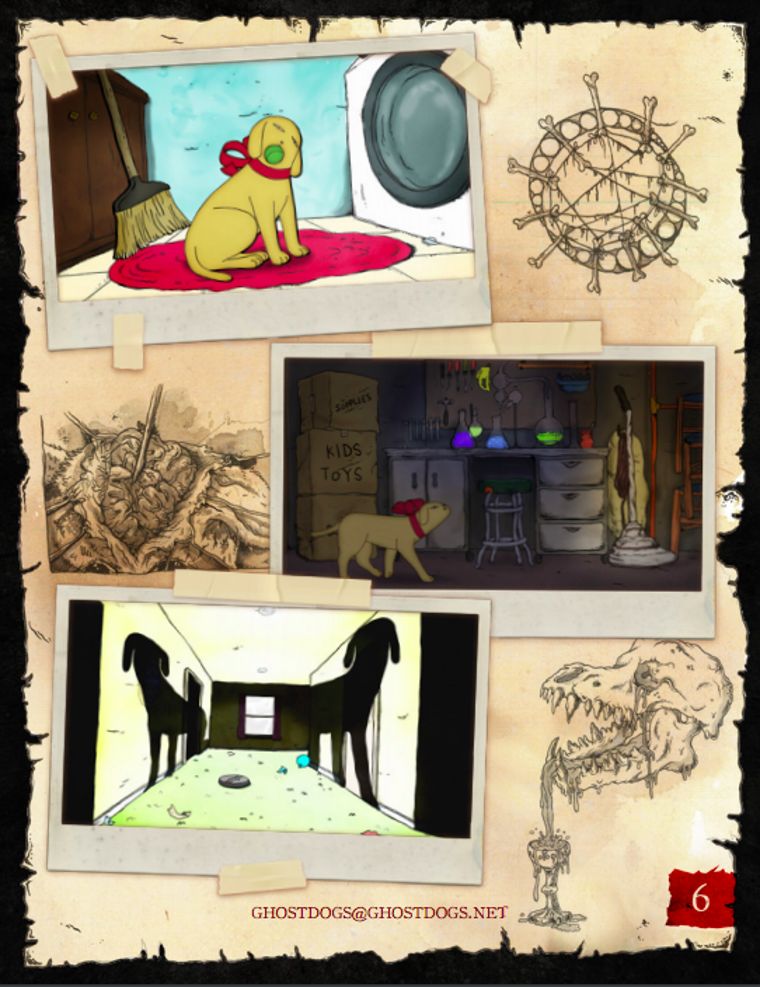 What was the biggest lesson you learned so far from the Ghost Dog experience?

What do you hope audiences (and their dogs) will get out of your short?

I hope people have fun. I think it’s a concept that lends to some pretty interesting gags. JW and I really wanted our film to look dated, like it was some late night cartoon unearthed from the

’90s. But I think the comedic sensibility of Ghost Dogs lends itself to that era as well. But I also want audiences to be terrified! Someone told me it’s a rollercoaster of laugh out loud moments and pure dread.

What’s your fave animated character of all time? Why?

After thinking about it for a good 30 seconds I think I’m going to go with Sassy from The Big Lez Show. He’s a sasquatch character with an Australian accent. He just bums around and surfs. One of those guys that doesn’t take life too seriously, and is always around if you just wanna waste the day away. I don’t surf, but I’d be down to get some Mexican food or something with him!