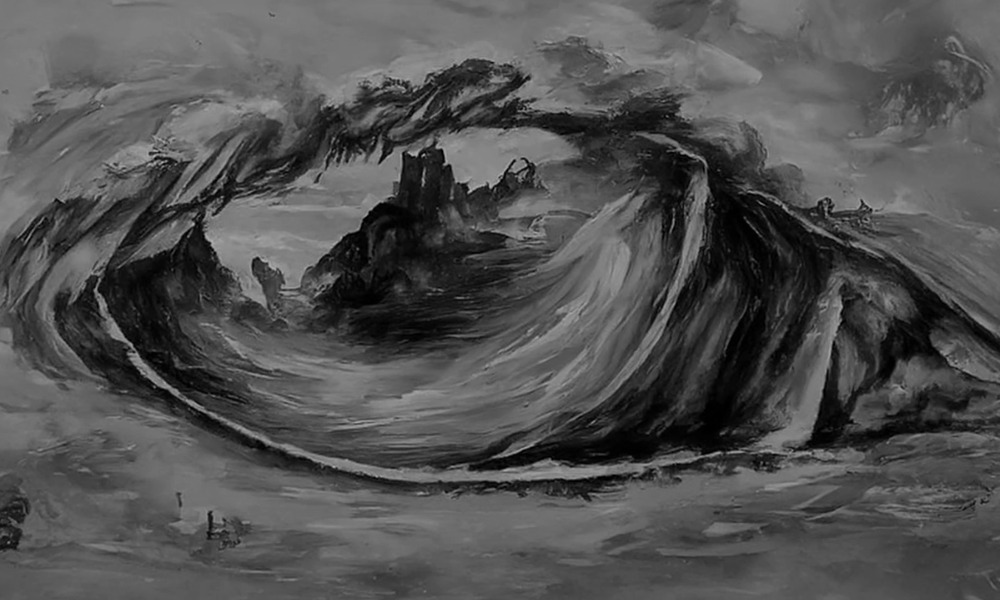 An unnamed narrator recounts his pursuit of an animal that appears mysteriously one night on the beach in the new animated short Pearl Dog. The strange tale, which originated as a gothic horror-inspired poem created by British directors Bethan Coolin and Samuel Jon Poyser, was brought to life using a world’s-first AI-augmented animation technique that transports viewers into an inky, eery, ever-morphing landscape of unreality.

We caught up with the Derbyshire-based filmmakers to learn more about the unique process behind Pearl Dog and the artistic ups and downs of producing with artificial intelligence: 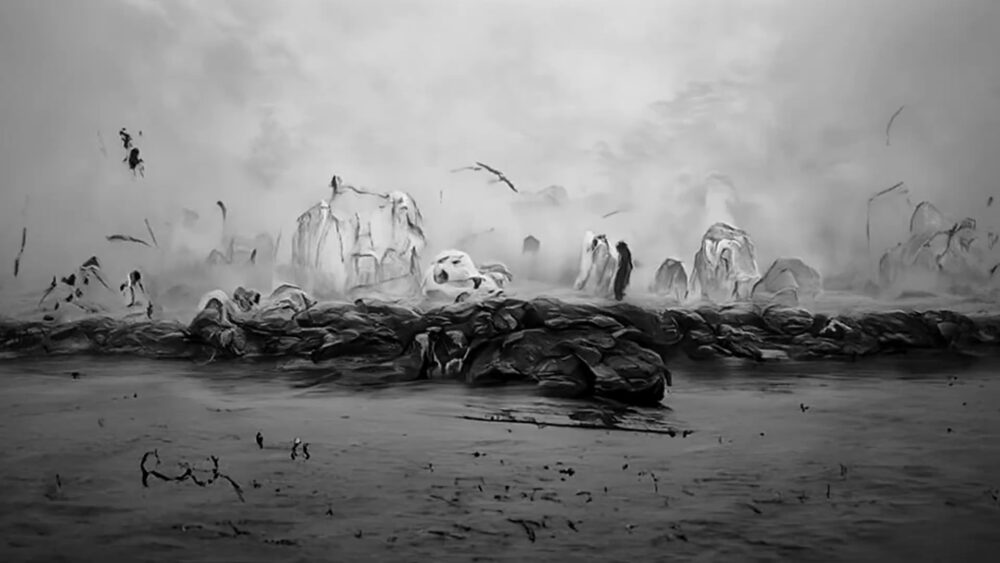 Animation Magazine: Can you tell us your inspiration for the short?

Bethan Coolin: The idea really just started with the name scribbled in the back of a notebook. We have both always enjoyed classic literature and so it quite naturally evolved into this gothic piece of poetry. It draws a lot of inspiration from the works of Edgar Allan Poe and Samuel Taylor Coleridge. There is even a line in Pearl Dog which nods to The Raven and The Rime of the Ancient Mariner.

It wasn’t until some time later we began to discuss adapting the poem into a short film, and it was some time after that we began to experiment using artificial intelligence to help realize the film. Stylistically we looked towards rotoscoped animation but also classical works of art that we thought captured the mood of Pearl Dog.

It has taken around a year of continuous experimenting, refining and development to complete the film. However, the poem and the idea to potentially adapt it had been floating around for considerably longer. 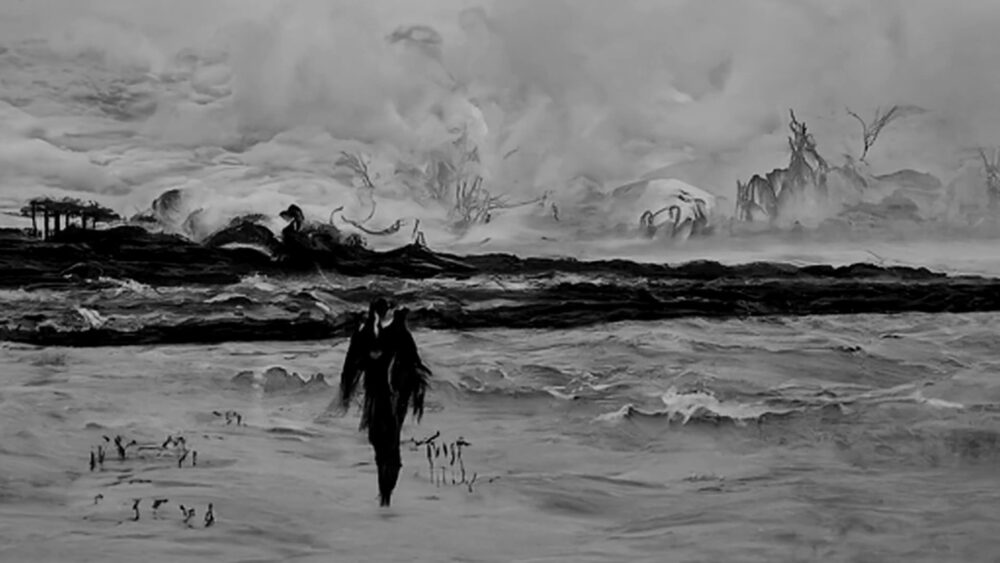 How many people worked on it with you?

The entire film was created by myself and my co-director Samuel Poyser. I bought the poem and some early sketches to Sam and pitched the idea of using AI to bring the story to life. Sam studied film production at university and even wrote his dissertation about artificial intelligence, so he seemed like an obvious person to bring onto the project. He was initially very skeptical because the earliest test footage we produced was a complete unmitigated disaster. We committed countless afternoons and weekends to drawing, shooting and animating, but were admittedly unsure if the finished film would be coherent enough to hold up as a narrative piece.

Ultimately, we completed the film together and it wasn’t until we began editing that we cast the fantastic Conor Charlton as the voice of our narrator. As soon as we heard Conor’s interpretation of the poem paired with the visuals we both felt we had captured something really special. Outside of ourselves and Conor no one else was involved with the project. 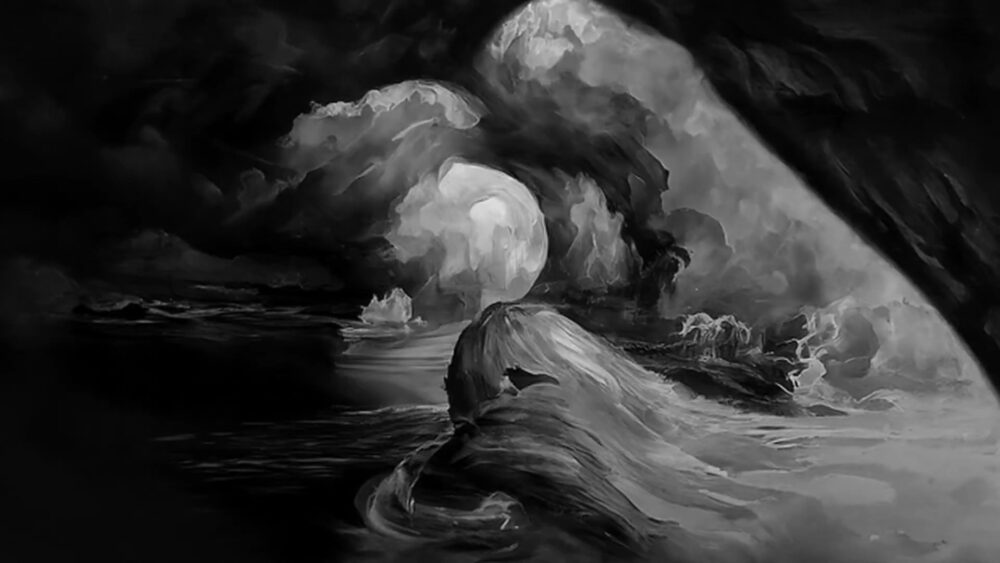 Can you tell us which tools you used to produce the animation?

We used various open-source AI modeling programs such as VQGAN-CLIP, which is a neural network that creates images based on prompts. More refined versions of these models allow the use of an initial image to guide the AI, which allowed us to manipulate the style and coherency of the output. Each frame of Pearl Dog is an individual AI interpretation.

What were the advantages of using AI modeling and how did you mix it with traditional animation?

One of the biggest advantages with AI modeling is the speed at which images can be generated. Once the AI understands the prompts and the desired style has been achieved, it can produce images much more quickly than even an entire team would be able to draw by hand. Unfortunately, still being in the early stages of development, it is often hard to control, can be wildly unpredictable and does not always produce desirable results.

To achieve the style and maintain consistency, we used my own hand drawn imagery, much as you would expect in traditional animation, which was a laborious process but allowed us to achieve shots that would otherwise be impossible. 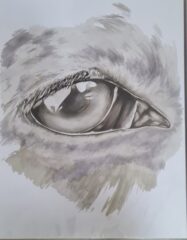 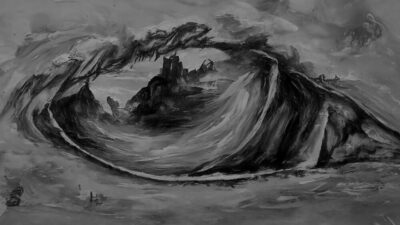 What were the toughest aspects of this kind of blended filmmaking?

I think we both found wrestling with the artificial intelligence to be one of the toughest aspects of this kind of filmmaking. You can end up wasting a great deal of time, resources and energy on shots that are ultimately unusable — often the individual frames may look beautiful but once they are in motion they fall flat. Keeping in mind, to produce the AI animation we first had to produce reference footage using traditional filmmaking techniques, no different than producing a typical live-action short film. This made it especially disappointing when scenes failed to translate.

What lessons did you learn?

I think the biggest lesson for us both was to stay patient and be persistent. This wasn’t the quickest or easiest way of adapting Pearl Dog into a short film, however it was the method that we feel best allowed us to capture its mood and identity.

Pearl Dog is open to interpretation, and we would love for audiences to find their own meaning in the story.

Pearl Dog is produced by independent British production company 5247films. The short will premiere at Repton Filmfest on July 10, screening at the historic Repton School. (Tickets for the Animation Competition available here.)