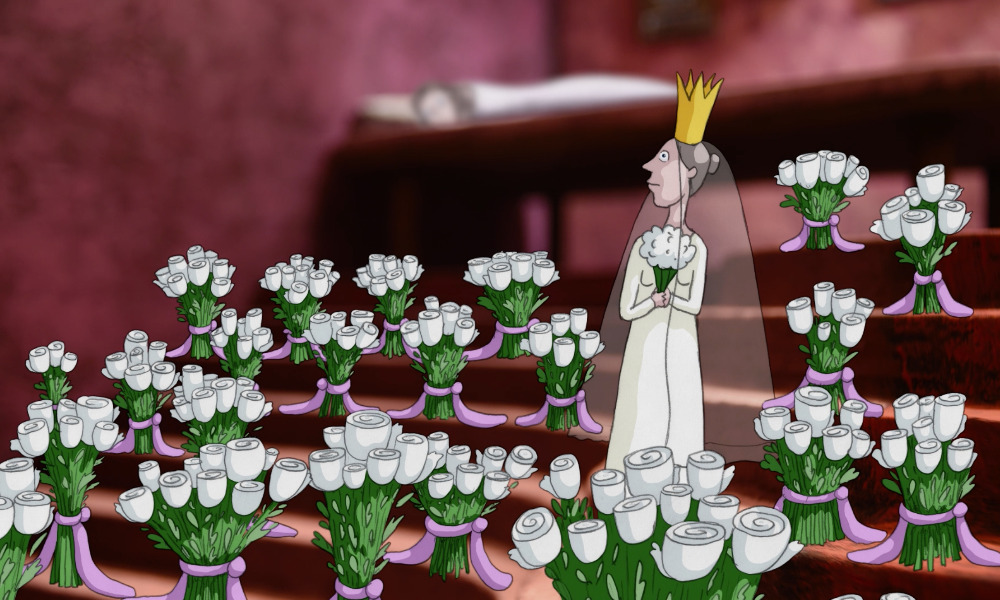 Latvian writer, director and illustrator Signe Baumane’s new feature My Love Affair with Marriage centers on a woman named Zelda who finds herself questioning how society and culture have taught her from a young age that traditional ideas of love and marriage will bring her happiness. But as she grows older, she realizes that the more she tries to conform, the more her body rebels against those notions.

Baumane, who is best known for her award-winning shorts such as Teat Beat of Sex (2008) and Birth (2009) and the movie Rocks in My Pockets (2014), was kind enough to answer a few of our questions only a few days before her Cristal-nominated movie premieres at Tribeca Film Festival and Annecy. Here is what she told us: 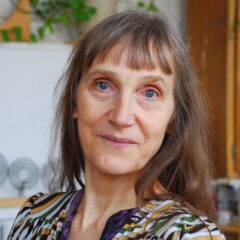 Animation Magazine: Can you tell us a little bit about the inspiration and genesis of the movie?

Signe Baumane: I made a lot of short films about sex and I made one feature film about depression. In my new film, I want to combine the two themes — so I am making a film about marriage.

After my first animated feature film Rocks In My Pockets, I wanted to make a film about my second marriage to a self-described gender-bending man, a fellow animator. I thought it was a very dramatic story of how we project our desires and hopes on another person. Early in the process of writing it, I got distracted by a question: “Why did we want to marry?” I had to investigate. That led to the whole history of a young woman’s search for love.

When did you begin work on it and how long did it take to produce?

I started writing the script in September 2015. It took a year and two months to write it, because I also had to do science research. Then we had to put some funding together and find partnerships. We started production in earnest in 2017 and continued it through the pandemic until June 2021. The post production took another year.

How many people worked on the movie with you?

At different times we had different people, especially in the beginning when the production process was yet to be perfected. The production really settled in around late 2018 and then we had pretty good teams collaborating in Brooklyn, U.S. and Riga, Latvia. We had a team of six people in Brooklyn — building sets, coloring, lighting, photographing, animating, shading, scanning drawings etc. etc. In Latvia a team of 10 artists colored the animation drawings in Photoshop with an emphasis on artistic shadows and a team of five compositors put the animation together with stop-motion backgrounds. 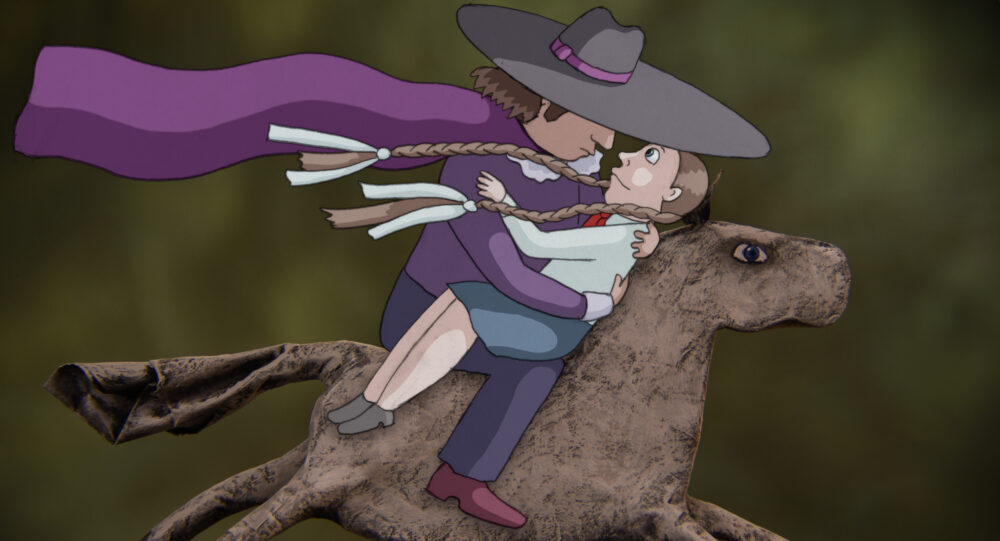 Why did you decide to add scientific animated bits about human emotional and biological experiences to your personal journey as a filmmaker?

In most of my work I want to find out what is behind the veil of the world we live in. We, humans, are really adept at building fantasy worlds, and I feel very often we get disconnected from reality. In Teat Beat of Sex, I took at look at the reality of what is sexy from a woman’s point of view. Rocks in My Pockets examines what it’s like to live with mental illness.

What is behind the most overhyped human emotion, Love? If you truly want to find out, you have to dive into human biology and neuroscience. It was inevitable that Biology walked into the script of My Love Affair with Marriage as a character to state her case. You may be able to break up with a bad lover, but you may never be able to walk away from your own biology.

What are you most pleased about with the finished movie?

One of my favorite things about My Love Affair with Marriage is the music by Kristian Sensini. He wrote 23 distinct songs, and an amazing score. I love how the Biology music in the opening scene draws us into the story, and the end-credit song (sung by Storm Large) closes the story with a feeling of hope and possibilities. I also love the Biology animation segments, animated by Yajun Shi. Her particular style adds to the style of the rest of the film and still stands apart as a separate space, the world of Biology. Yajun’s Biology segments evoke a sense of mystery.

I am totally psyched about the 7.1 sound of the film. We got to work with one of the best post-production sound studios in Europe, Philophon in Luxembourg. The work of sound designer Pierre Vedovato and sound re-mixer Loïc Collignon is astonishing. There are a lot of different sound elements in the film — voice over, dialog, score, songs, effects, etc. — and they all come together in a beautiful, comprehensive sound narrative. I absolutely love it. 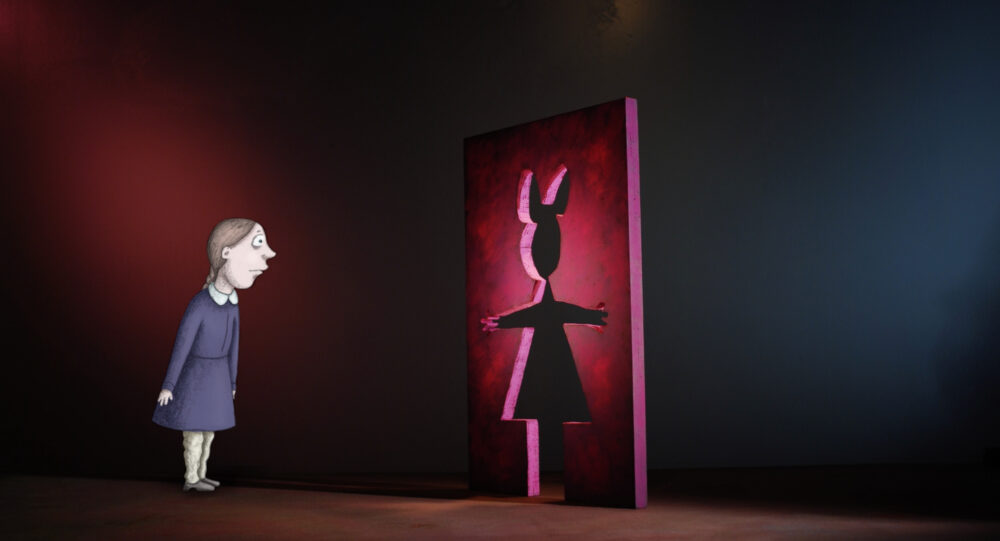 What was the most challenging aspect of the making of the movie?

Definitely having to constantly fundraise. I always wished to disappear in the creative process, to think only about the characters and how to animate them, but every few months or so we had to get creative about fundraising. The other challenge was: How do you keep motivated when making a film takes seven years? There would be times when I would raise my head after animating for a year and see that I only made 15 minutes with 90 more to go and I would start screaming (internally, of course, but it would be a desperate howl of a wounded animal). I am an impatient person, I want everything to be done yesterday. 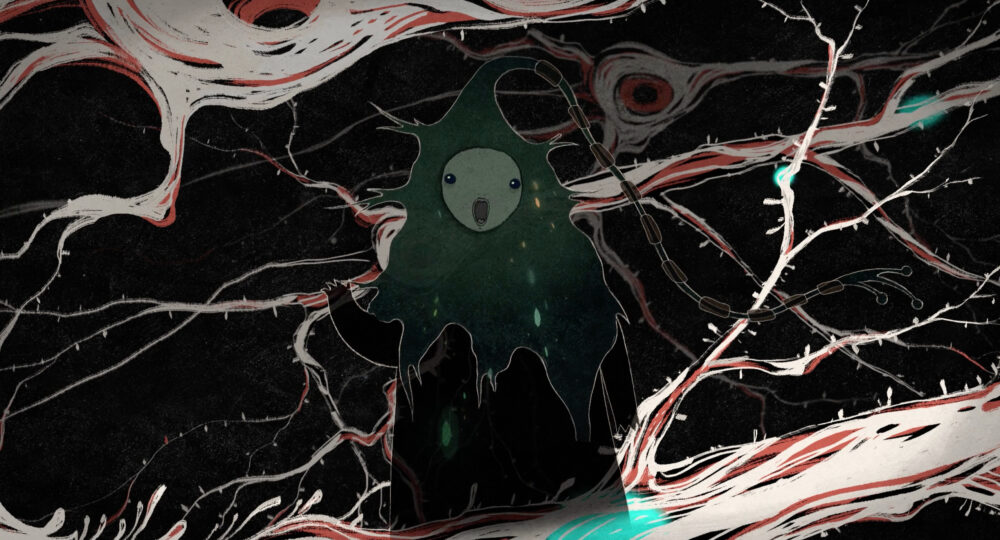 When did you realize that you wanted to work in animation?

After studying philosophy for five years at Moscow State University I was supposed to go back to Latvia and teach philosophy and, for many reasons, I didn’t want to do that. My friend Irina who later became a famous singer in Russia pointed out that instead of writing down the lectures I filled my notebooks with doodles. “I want to see them move.” she said. “Why don’t you go into animation?” As I was organizing my doodles into storyboards I realized this was it. This was the thing I was born to do.

What was the biggest lesson you learned from the making of your new movie?

When we started the project back in 2015 we thought the next year we would have a woman president in the U.S.A. Since then we had many major movements, societal upheavals, backlashes — and, now, a horrifying Russian invasion of Ukraine. Sometimes it was hard to sit at the table and animate when the world seemed to be either falling apart or moving in a new direction. But I did have a feeling that the film is relevant to our current times. The biggest take away from this experience is that the connection between me and the film’s 1,685 backers via our regular newsletters and their response to those newsletters was an absolute necessity in the process. Our supporters’ trust in me and the project carried me through the doubt and uncertainty. It made the lonely process of animating less lonely and assured me and our team that we were on the right track. 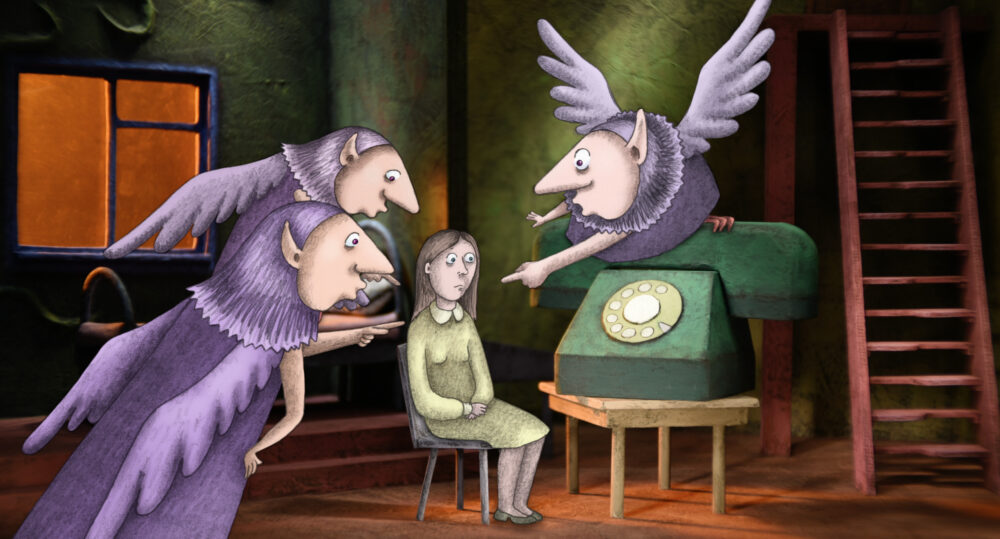 What is your take on the broader animation landscape today, especially compared to when you started out?

It is a complex, big question that requires a thoughtful and sophisticated answer — I am only an independent animator playing in my own sandbox. I am happy to see that there are more and more women directors directing animated feature films and there are more women-centric stories. My pet peeve is that animation is considered by mainstream media and general audiences as a medium exclusively for children, dismissing the amazing potential of what animation can do for adult audiences.

A new development in the industry is that with all the streamers, VODs and SVODs etc. etc., a film is now called “content” and the filmmaker / artist a “content creator.” I think once you buy into this notion that you are making “content” you dismiss yourself as an artist. An artist’s mission is to break new ground, to discover new vistas, new possibilities for the art form and for society.

What do you hope audiences will take away from it?

I hope the audiences will walk out of the film humming the end credits song “Lion,” charged with hope, understanding and desire to make the world a better place, starting with themselves. 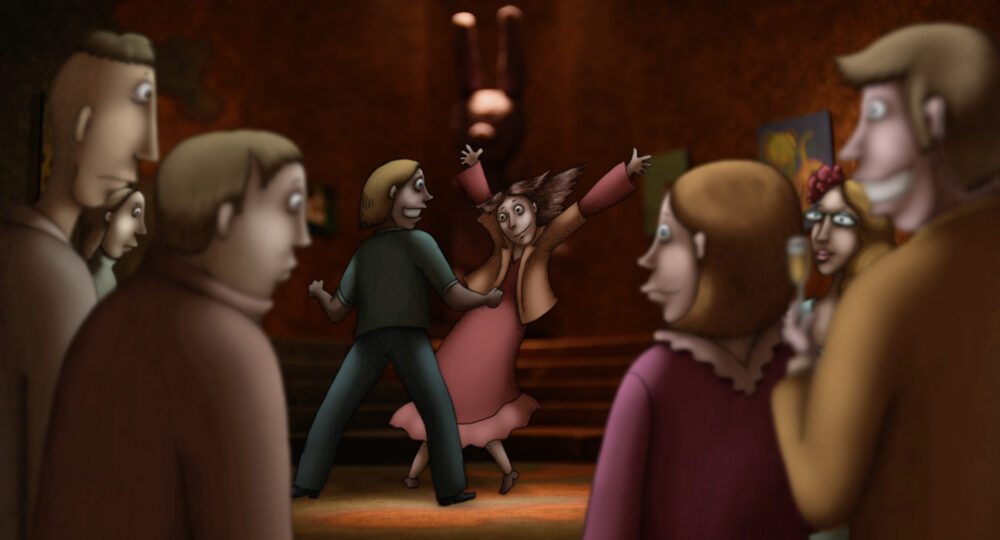